Should Booth Babes Be Given the Boot?

Industry professionals weigh in on whether using models is an effective trade show marketing tactic or if it's time to give the tradition a reboot. 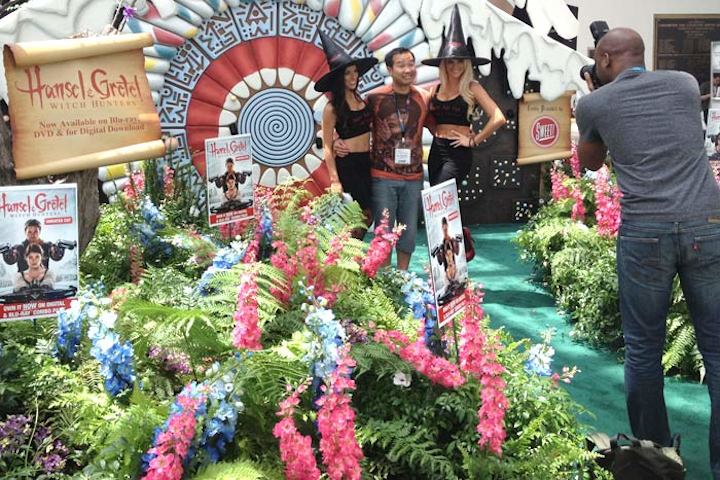 An attendee posed with models in abs-revealing witch costumes at the Electronic Entertainment Expo in Los Angeles in June.
Photo: Alesandra Dubin/BizBash

If you've ever been to or worked on a trade show like Comic-Con, E3, C.E.S.—or any other event with a significant ratio of male attendees—you've seen the so-called "booth babes": models, usually women, employed to appear scantily clad or in costume and represent brands. They're omnipresent, yes, but the models are also turning off an increasingly high number of show-goers and industry folks alike. Some shows like PAX are going so far as to outright ban them.

We surveyed event professionals for their takes and found that most did not support the (ahem) marketing model, although some considered it somewhat effective as a trade show booth draw. As the topic continues to be a sensitive one, some declined to give their title or company name, while others wished to remain anonymous; here's what they said:

"In short, booth babes are an evil. There are no two ways about it. Are they a necessary evil? No. Are they an effective evil? Absolutely. At the two most recent large-scale conventions I was a part of—E3 in Los Angeles and the UFC Fan Expo in Las Vegas—booth babes were far and away the most budget-effective way of drawing a crowd. And I make that budgetary distinction because the most effective head-turners were celebrities and athletes, but when you take into consideration the disparity between the price tags, the drop-off in traffic generated by booth babes versus sponsored or paid celebrity appearances is really negligible. To a strained budget, the booth babe is the best value, hands down. [But] if the client starts facing pressure from partners and sponsors uncomfortable with this kind of exploitative marketing tactic, then the booth babe tactic is no longer a boon to the budget, but a millstone."
—Tommy Gomez, creative director and marketing strategist, The Projects

"Even if booth babes could still drive traffic (unlikely), are [the people the tactic draws] qualified leads that want your product? Doubt it."
—Joanna Stasuk, marketing director, Bartizan Connects

"It can be effective marketing if the booth babes are relevant to the product or brand in some way, like a video game character, as an example. But without that relevance, I think competent brand ambassadors or product specialists are more effective at creating an informative and valuable booth engagement."
—Dave Lee, head of production, Zed Ink

"Scantily clad women have long been used to lure men toward one product. They’ve been a great tool for Comic-Con exhibitors over the years, but as more and more women are drawn into the world of science fiction, comic books, and gaming, the scantily clad 'booth babes' (and female characters in games and comics as a whole) may need a reboot."
—Melissa Savage, event producer

"It has been my experience that when organizations have booth babes, they are at a show where the audience is largely male and no research was done about the attendee demographics. So they go with, 'What will the stereotypical male respond to?' I have seen far less booth babes that are male. [The thinking is] 'We need something eye-catching but we can't hire a design team or an expo group, so let's pay someone $20 an hour to wear a cute dress or an outfit in our company colors and pass out pamphlets.' This often falls short because now you probably have someone in your booth who knows absolutely nothing about your product. The people who are stopping to gawk at your booth babe aren't buying anything. Decision makers need more than a pretty face."
—Chicago event professional tweeting via @EventProChicago

"Booth babes will never die at Comic-Con. They're attention-grabbers. While this method will never be the most groundbreaking tactic for engaging guests, any level of personal interaction helps. Brands shouldn't rely on booth babes as their only form of drawing people in but a second or third layer to attracting guests."
—Brian Diamond, owner, The Visionary Group

"We can all agree that objectifying women to drive a marketing initiative is a bad move. It's unseemly and doesn't jibe with a good marketers moral compass. But, let's not deny it: For the right audience, with the right brand—sex still sells. The whole concept of booth babe might be a little out of step with current attitudes and trends, but it's still so dang catchy to say. Ultimately, good marketing comes down to answering a couple big questions: Who's my audience? What's the right message? What kind of behavior do I want to affect? Sometimes, a pretty face is enough. But if it's not, and that's the only tactic you've got in your bag, then your biggest fault as a marketer is the one you're paying to the bottom line."
—Michael Fargnoli, principal, Brodey Francis Inc.