2019 Preview: What to Expect From the Year’s Notable Events 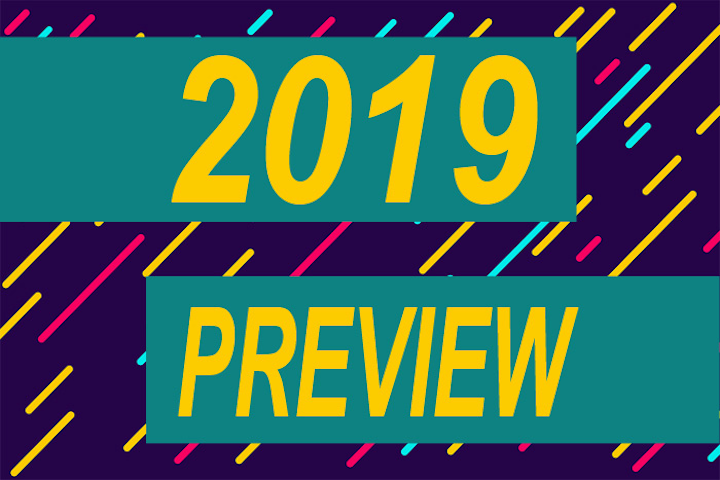 From highly scrutinized events such as the Oscars and the Super Bowl, to events that continue to get bigger each year like C.E.S. and South by Southwest, here’s a look at what to expect from major events in 2019.

Golden Globes
The 76th annual Golden Globes will air live from the Beverly Hilton in Los Angeles January 6 on NBC. Sandra Oh, who was nominated for her role in Killing Eve, and Brooklyn Nine-Nine star Andy Samberg are slated to co-host the event; the pair also presented an award at the 2018 Emmys. The Hollywood Foreign Press Association nominated films include A Star Is Born, Black Panther, and The Favourite in film categories, while The Americans, Pose, The Good Place, and The Marvelous Mrs. Maisel garnered nods in the television categories.

C.E.S.
The 52nd edition of the world’s largest consumer electronics and technology trade show will take place January 8 to 11 at 11 venues across Las Vegas. New to this year’s event, which attracts some 4,500 exhibitors, will be the Resilience conference program and exhibit areas, showcasing technology designed to keep the world safe. Verizon C.E.O. Hans Vestberg will deliver the conference’s keynote address, and Drake will perform during the event at XS Nightclub. C.E.S. draws an average of 60,000 attendees from more than 155 countries.

Sundance Film Festival
The 35th edition of the winter festival staple in Park City, Utah, will run January 24 to February 3. Festival organizers shared new inclusion initiatives, which seek to add people to its programming team to achieve a 50/50 gender balance. The festival also partnered with Stacy L. Smith, the founder and director of the University of Southern California’s Annenberg Inclusion Initiative, on a research project to analyze the demographics of submissions to the festival. For 2019, the festival received a record-breaking 14,259 submissions from 152 countries; it will screen 112 feature-length films that represent 33 countries and 45 first-time filmmakers. Fifty-three percent of the directors in the U.S. Dramatic Competition are women and 41 percent are people of color.

North American International Auto Show
The 31st annual International Auto Show in Detroit will run January 14 to 27 at the Cobo Center. The event will feature more than 300 exhibitors at its six shows. These include the Gallery, an ultra-luxury automotive showcase; AutoMobili-D, which focuses on future mobility platforms; and the nine-day public show. 2019 could be the last time the event takes place in January; show management announced the event would move to June in 2020, after signing a seven-year contract with the Cobo Center to continue as its venue through June 2026.

Super Bowl LIII
The 53rd Super Bowl is heading to the Mercedes-Benz Stadium in Atlanta on February 3 and, naturally, the halftime show has taken up most of the media coverage of the N.F.L. championship so far. After Rihanna reportedly turned down the league’s offer to perform in support of ostracized player Colin Kaepernick, it was reported that Maroon 5 would be the headliner (although the N.F.L. hasn’t officially announced this). Now, the band is struggling to find other musicians to join them for the 13-minute show, as many artists are refusing to perform because of the N.F.L.’s position on a player’s right to protest. Besides the halftime show, the Super Bowl will see satellite events around Atlanta, including DirecTV Super Saturday Night featuring the Foo Fighters; and the first Bud Light Super Bowl Music Festival, headlined by Post Malone, Bruno Mars, Cardi B, Migos, and Ludacris.

Grammy Awards
After a one-year stint in New York, the Grammys will return to the Staples Center in Los Angeles for its 61st edition, which will air live on CBS February 10. After the last ceremony was criticized for its lack of female representation onstage and in major categories, the Recording Academy introduced a diversity task force to focus on female inclusion. So far, the awards seem to be improving from last year on that front; artists nominated in multiple major categories include Cardi B, Janelle Monae, Kacey Musgraves, and Lady Gaga. Whether the show will continue to draw low ratings—it saw a 24 percent drop in 2018—remains to be seen. Recording Academy president Neil Portnow, who drew backlash after saying women in the music industry needed to “step up,” will step down as president when his contract expires this year.

Academy Awards
In recent years, the Oscars dealt with considerable controversy and the lead-up to this year’s ceremony is proving to be no different. The 91st annual ceremony, which will air live on ABC February 24 from the Dolby Theatre in Los Angeles, still doesn't have a host. In December, the Academy of Motion Picture Arts and Sciences (the Oscars governing body) announced Kevin Hart would host, but in the span of a week, Hart dropped out of the gig after refusing to apologize for past homophobic tweets. Now, the ceremony is considering having multiple hosts to move the event along. And after the Oscars saw its lowest rated ceremony in history in 2018, the Academy announced the runtime would be shortened to three hours and that certain technical categories would be awarded during commercial breaks; footage from those categories will be edited and aired toward the end of the broadcast. The Academy also announced that in 2020 the ceremony will be moved to early February, which might have event producers dealing with a quicker turnaround after other major award shows. And it’s still unclear if the Oscars will move forward with its idea to introduce a category honoring “popular films.”

South by Southwest
Austin’s annual technology, music, film, and television conference and festival will take over numerous venues in the city March 8 to 18. The 33rd edition of the event will have keynotes from Instagram C.E.O. and co-founder Kevin Systrom and TechCrunch editor-at-large Josh Constine. Featured speakers include Lance Bass, Elisabeth Moss, and Trevor Noah. The festival shows no signs of slowing down its growth—in 2018, the South by Southwest’s economic impact for Austin totaled $350.6 million.

Ted2019: Bigger Than Us
TED’s annual flagship conference will take place April 15 to 19 at Vancouver Convention Centre East. This year’s conference theme is “Bigger than us,” which will focus on technology and science that will shape the future and the design of cities and other systems created by humans that shape everyday life. The conference will have 11 sessions of TED’s signature 18-minute talks, as well as TED Fellows Talks and other events.

Met Gala
Reaching new levels of pop culture relevance when it was recreated in the female-led heist comedy film Ocean’s 8 last year, the Metropolitan Museum of Art’s annual Costume Institute Benefit will have a theme inspired by camp. The museum’s 2019 Costume Institute exhibition, “Camp: Notes on Fashion,” is inspired by Susan Sontag’s 1964 essay “Notes on ‘Camp.’” The gala, taking place May 6, will be co-chaired by Anna Wintour, Lady Gaga, Serena Williams, and Harry Styles.

C2 Montreal
While C2 is no longer expanding to Australia, the annual innovative business conference in Montreal will have its eighth edition May 22 to 24 at the Arsenal. Filmmaker Spike Lee will headline the event, which has the theme “Tomorrow.” Lee will lead a discussion on racial inequalities and the creative storytelling behind his films, most recently of which is the Golden Globe-nominated BlacKkKlansman. The international conference, which attracted more than 7,000 attendees last year, will have five content pillars for its programming: art and design, society and environment, leadership and talent, marketing and media, and science and technology.

World Pride in New York
One of the largest gay pride events in the world will be even bigger this year. Marking the 50th anniversary of the Stonewall riots, N.Y.C. Pride will host World Pride and the annual march on June 30. Last year, event organizers Heritage of Pride changed the route to speed up the march and prepare for the international celebration, which might draw as many as five million people to Manhattan—compared to the 2.1 million that attended in 2018. Last year’s event featured more than 550 unique marching contingents and more than 100 floats.

San Diego Comic-Con
Comic-Con International, also known as San Diego Comic-Con, will celebrate its 50th anniversary July 18 to 21 at the San Diego Convention Center. Last year, the event saw the absence of major brands and franchises, including Marvel, Star Wars, and HBO. It hasn’t been announced whether or not they will return this year, but the convention might have better odds, with the final season of Game of Thrones, and films like Captain Marvel, Avengers: Endgame, and the final installment of the Star Wars sequels all premiering in 2019.

Toronto International Film Festival
The 44th edition of the largest film festival in North America will take place September 5 to 15 at venues across Toronto. Heading into the new year, TIFF has two new appointments to its board of directors—Wes Hall and Tawfik Hammoud. Last year, the festival screened 255 films and held its first women’s march and rally as part of the second year of Share Her Journey, a program that prioritizes gender parity in the film industry.