Oscars 2019 Review: Event Producers Give 91st Ceremony a B+

Event producers from across the U.S. and Canada discussed what they liked and disliked about the 91st Academy Awards. 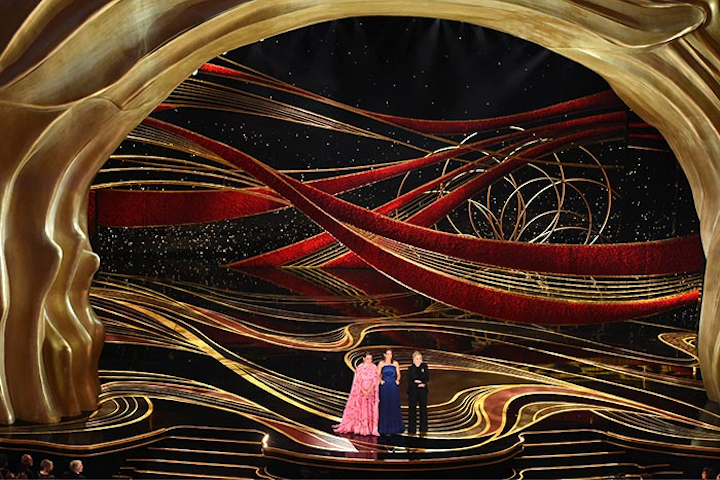 To say that the road to the 91st Academy Awards has been uneasy would be an understatement. In the past few months, the Academy of Motion Picture Arts and Sciences and Oscar ceremony producers faced consistent backlash for changes they announced. These included airing four categories during commercial breaks and eliminating several of the original song nominee performances—changes that were both retracted—and going without a host after Kevin Hart dropped out of the gig over refusing to apologize for homophobic tweets. But Sunday night's Oscars, which took place without a host for the first time since 1989, seemed to resonate well with event producers across the country. The ceremony at Dolby Theatre, which saw Green Book win best picture, featured presenters including Amy Poehler, Maya Rudolph, and Tina Fey carry the ceremony along, against a stage backdrop designed by David Korins that evoked traditional Hollywood glamor. Here's a look at what event producers liked and disliked about the 91st ceremony, including an opening number by Queen and Adam Lambert, Korins's floral installations and proscenium design, and social commentary from winners and presenters.

Paige Buck
“I loved the three-dimensional solid structure wall on the red carpet with varying sizes of Oscar statues cutouts. I will definitely use it as inspiration to make step and repeats pop at future events. The most notable thing was the pacing, which didn’t suffer for lack of a host. It started off high energy with the performance by Queen and Adam Lambert. The musical choices and the speed of the camera cuts kept the energy up throughout the show, which made it more enjoyable than an average Oscars year.

The projection mapping was stunning and I noticed it for the first time during Jennifer Hudson’s performance of the RBG song. I did not love the rippling oyster-looking folds of the stage or proscenium arch. But of course, the nominees and winners blew me away for their diversity, their moving social commentary, and their call on us, all of us, to do more and do better. I was inspired and never bored—a rarity in an awards event!”

Liz Carroll
“Following Kevin Hart’s step-down as this year’s host and the Academy officially confirming in January they would be going hostless, I have to admit I was a bit skeptical. The performance delivered by Queen with Adam Lambert was a surprisingly fun and a welcome deviation from the predictable monologue. The abridged version of the more traditional opening that followed—delivered by the most iconic female comedic trio of our time—provided just the right amount of mild roasting and laughter. I found the combination of the two acts to be a refreshing start.

Ultimately, not having a host allowed the show to move along more quickly, something I personally was thankful for as an East Coast viewer. Several of the presenters filled the ‘host shoes’ by delivering funny snippets and, the final moment of the evening with Julia Roberts wishing us all a ‘Goodnight’ solidified my feelings; the Oscars were better hostless.

The true highlight of the night for me was the stage design. The flowing gold proscenium that expanded into the theater was delicate while still making a bold statement. Intricate floral installations are continuing to have their moment and the understated use of red roses all throughout was elegant. Swarovski crystals provided that sparkle we’ve come to expect from the Oscars. Each element we saw during the evening, as well as the stage floor, incorporated the wave design as a common thread. The transitions between the various sets were seamless and created an overall visually stunning backdrop for Hollywood’s most glamorous evening that didn’t disappoint. All in all, it was hard to find much to critique about this year’s Oscars.”

Letter grade: A
Carroll is a project manager at Sequence Events, a New York based events agency. Clients include LinkedIn, Foot Locker, Lego, and TEDx.

Jake Brooks-Harris
“Given the dramatic backstory leading to the Academy's decision to go hostless at this year's Oscars, many were expecting a qualitatively different Oscars than we've seen before. But in fact, the 91st Academy Awards played it relatively safe, delivering an entertaining, well-paced show without many huge surprises. Visually, the whimsically organic set design felt like a charming interpretation of the telecast's legacy—old Hollywood glamor with some sculptural flair and a little mid-century pizazz. Some early, strong performers and presenters kept the pace zippy and delivered some nice moments, which for a while allowed the show's hostless format to work effectively. At times, though, I longed for a familiar face to guide us through the shows seemingly endless transitions and provide some comic relief, which was notably lacking in the show's second half. And the production value, especially compared to last year’s dynamic and constantly rotating series of set pieces, felt a bit static, although beautifully executed.

However, the show remained tight and very watchable. Well-edited interstitials and some fabulous, and slightly ridiculous, outfits kept us entertained. And while a few of the musical numbers felt slightly uninspired, the show maintained its momentum and I think the telecast did a good job of conveying a convivial and intimate evening for Hollywood’s ‘Who's Who.’ The tense political climate didn't figure very prominently, although notable exceptions like Spike Lee's poetic and deeply moving acceptance speech, and Rep John Lewis's introduction to Green Book, stood out. While the production design and structure didn't break any molds, the show's execution was confident and self-assured, and a few stunning, deeply memorable performances—looking at you Lady Gaga—made this feel like a strong iteration of this venerable award season institution.”

Letter grade: A-
Brooks-Harris is the president of MKG West, the West Coast office of experiential agency MKG. Clients include Netflix, Google, and Paramount.

André Wells
“The much anticipated 2019 Oscars came and went at the same pace—or so it seemed. Being in the business of entertaining, I love a host, and especially a good one. So the host spot was definitely missed. The host carries the mood of the show, the rhythm, the beat, and the pulse. The stage set was very gorgeous and glamorous. It was very on trend with the paved rose Oscar statues, and the honeycomb paper Oscar statues added a bit of whimsy. What I, too, loved was the versatility of the set, from the proscenium to the movement in the backdrop and amazing tech aspect of the stage production. A missed opportunity for me was the lack of entertainment, besides the Oscar nominated songs. I felt the show needed more interactive moments with the audience. However, I did feel like the show had a sense of community and an overall sincerity for the accomplishments of its peers.”

Letter grade: B-
Wells is the founder and C.E.O. of Events by André Wells, a Washington-based event planning firm. Clients have included BET, Alvin Ailey American Dance Theater, and FedEx.

Tony Schubert
"I always think opening a long show with a great musical performance gets the night off to a good start. Queen was fantastic. Not having a host this year kept the show running smoothly and on time. David Korins killed the set design this year. From the proscenium wave built from sculpted foam in ten pieces, to the rose hill with more than 8,000 real flowers, to the crystal waterfall. It was a welcome change for us who care about the design. Overall, I think the producers did a great job with presenters and the writers kept the comedy bits tight and not too long.”

Ruby Sohi
“The non-traditional format of this year’s Oscars will definitely be one for the history books. The Academy took a pretty big risk when they decided not to have a host, but we all know the producers were left scrambling just months before the event. Typically, we depend on an emcee to build consistency throughout the show and help navigate the ceremony, providing commentary and gelling all the pieces together. Much to my surprise, I actually liked the new, ‘no host’ model. By using the ‘voice of god’ and dividing the hosting responsibilities amongst the presenters, the show seemed to flow pretty quickly and seamlessly between the presentations and performances.

Although not my favorite this year, the stage was beautifully built with 40,000 real roses and 26,000 crystals. The dynamic movements and changes in lighting, between the presentations, were quite spectacular. I also loved the consistency of the ribbons, which echoed on the red carpet as well as the video montages. It was the opening act by Queen and Adam Lambert that stole the show for me. It was fierce, powerful, upbeat, and emotional, which was a great start to the show. Overall, the show felt different this year but it was positively refreshing.”

Letter Grade: A-
Sohi is lead event planner and founder of Royal Blue Events Management, an event management company based in Toronto. Clients have included Kraft Canada, Radisson, and TD.

Matt Stoelt
"It felt like this year’s Oscars played it safe. From the fashion on the red carpet to the classic and whimsical set design, the 2019 Academy Awards felt boilerplate. The technical production was executed flawlessly and the absence of the host was not missed.”

Letter grade: B-
Stoelt is the C.E.O. and creative director of Stoelt Productions, a Los-Angeles based event production company with clients including MAC Cosmetics, Pandora, and Lyft.

Liz Hart
“Even without a solitary host this year, the Academy Awards was programmatically thoughtful. Opening with a show-stopping Queen performance with guest frontman Adam Lambert was the perfect choice for tone-setting. Queen is unifying; Bohemian Rhapsody messages inclusion; and ‘We Are the Champions’ effuses positive nostalgia for all. A rock-and-roll opener gave chills to an audience who seemed to welcome the alternative to attendee-roasting monologues. The 2019 Oscars felt like a celebration from curtain up.

The first hostless Oscars worked. Sending out the holy trifecta (Amy, Tina, and Maya) set up smooth sailing into the first category. Presenters exuded joy and camaraderie, and delivered remarks more naturally this year. Scenically, Broadway set designer David Korins made his Oscars debut with 40,000 red roses and a series of sweeping crystal installations. The wide camera shots of one piece, self-titled ‘Crystal Cloud,’ behind Michelle Yeoh and Pharrell took my breath away with its dimensional layering. With no ‘hard lines’ in any of the scenic element—a commentary on the show’s commitment to inclusion this year—it appropriately housed the most diverse and progressive Oscars to date. The foreign language film presentation in front of a subtle red, white, and blue scenic treatment was not lost. For me, the show message this year was clear: We are not going backward, in any way.

The Oscars thrived this year, cultivating and maintaining a spirited energy throughout, promoting humanity and long-unsung heroes, and seamlessly integrated new aesthetics and choices into a show nearly a century old—all while honoring the formalities and tradition of the night, which is a difficult feat and a home run.”