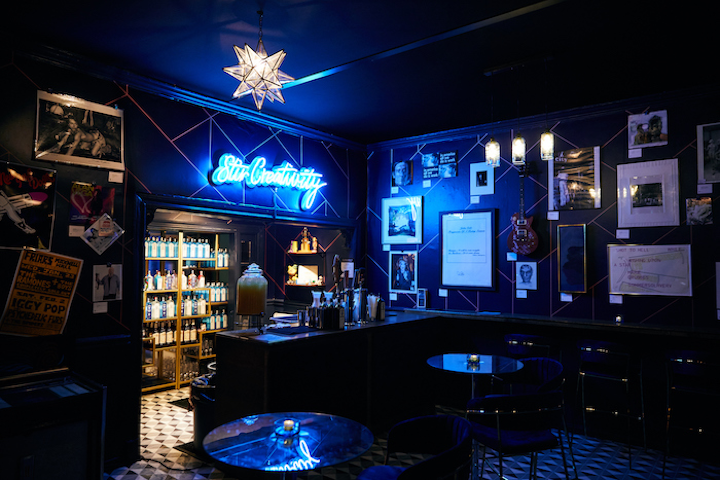 At the inaugural Frieze Los Angeles art fair last weekend, Bombay Sapphire created a pop-up cocktail bar and gallery inspired by New York City nightclub Max's Kansas City. The immersive space, located in a townhouse on the Paramount Pictures Studios backlot, featured artwork from the likes of Alice Cooper, Victor Bockris, and Bob Gruen, plus cocktails inspired by the club's history. The bar was open to all art fair ticketholders; it kicked off with a private event hosted by director Baz Luhrmann on February 14.
Photo: Courtesy of Bombay Sapphire

Florent Courriol has been named executive chef at Alexander's Steakhouse in Pasadena.

In Case You Missed It
We took a look at some fun cocktail ideas inspired by this year's Oscar nominees, and also previewed the Oscars' after-party's opulent theater-inspired design. We also peeked inside event producer April Luca's own baby shower, which came with an unexpected surprise guest.

In the News
Now in its second year, Beyoncé and Jay-Z's ultra-exclusive Oscars party may be the weekend's most coveted invite. The Hollywood Reporter: "Jay-Z and Beyoncé's top-secret post-Oscars soiree [is] expected to go down—as the couple's inaugural 'Gold Party' did in 2018—inside the Chateau Marmont's parking garage. Like Madonna's annual post-show soiree at Guy Oseary's house, now in its 12th year (but unlike Vanity Fair and the night's other starry alternative, Elton John's annual AIDS fund-raiser), Jay and Bey's bash is devoid of press, sponsors, or selfie seekers—a boon for stars after a grueling awards season." https://bit.ly/2SPFy9d

Despite the rainy weekend, the inaugural Frieze Los Angeles art fair was considered a success. L.A. Weekly: "While L.A. is known for its rich community of artists, its strength as a market remained in question. ... With dozens of millions of dollars changing hands, it's safe to assume two things: People do buy art in Los Angeles, and Frieze will be back next year." https://bit.ly/2BKYprq

Hollywood nightclub Playhouse, which opened in 2009, has been hit with 40 criminal charges, including after-hours alcohol sales and lack of security. Eater: "Last week’s announcement comes after a massive multi-agency effort where the California Department of Alcoholic Beverage Control, LA Department of Building and Safety, LA Planning Department, and the Los Angeles Police Department investigated the club over a ten-month period. ...  The focus on Playhouse began when a shooting occurred on New Year’s Day in 2018, where a patron was shot in the leg in front of the club." https://bit.ly/2ttKgdN

Surprise Event Metric of the Week
41,000—the number of Swarovski crystals that will be incorporated into this year's Oscars set designs. Hamilton and Dear Evan Hanson designer David Korins is serving as production designer for the first time, creating a 1,600-pound cloud-shape installation plus a 54-foot-wide ribbon-like installation. Overall, the crystal display took a team of 15 people more than 2,100 hours to fabricate.

Venue Buzz
From the team behind Umami Burger and 800 Degrees comes Heroic Wine Bar, an intimate Italian restaurant and wine room next to the Heroic Deli in downtown Santa Monica. Open since February 8, the space aims to promote conversation and group events with a bowtie-shape communal table for 16 at the center of the venue. Upstairs, a private dining room seats 12. The bar's design evokes a Roman garden, with black-and-white drawings of trees and a ceiling mural of stars and the zodiac.

Overheard
"This event was created to celebrate the power of black women. ... Women of color need to see other women of color winning in life."

—Boss Women Media founder Marty McDonald, chatting with LA Weekly about her new five-city pop-up tour called Black Girl Magic that kicked off in Los Angeles on February 16. The event was created to give women of color their own version of empowerment-focused events like the annual Girlboss Rally, and will travel to Dallas, Atlanta, Houston, and New York.

What's Next
This weekend is all about the Oscars, which take place on Sunday at the Dolby Theatre in Hollywood. A series of star-studded events will once again surround the main event, including the Film Independent Spirit Awards in Santa Monica on Saturday with host Aubrey Plaza.

In addition to the official Governors Ball, Sunday's highlights include the Elton John AIDS Foundation 27th annual viewing party at West Hollywood Park, featuring a performance by the Killers, plus Vanity Fair's famed after-party at the Wallis Annenberg Center for the Performing Arts. Netflix, Warner Bros., and Fox are also hosting post-ceremony bashes.

In industry news, the Wedding International Professionals Association (WIPA) will host its SoCal chapter meeting on February 27 at Giracci Vineyards in Silverado.