Agency EA shares insight from the Pritzker Forum on Global Cities on planning for both on-site and online attendees. 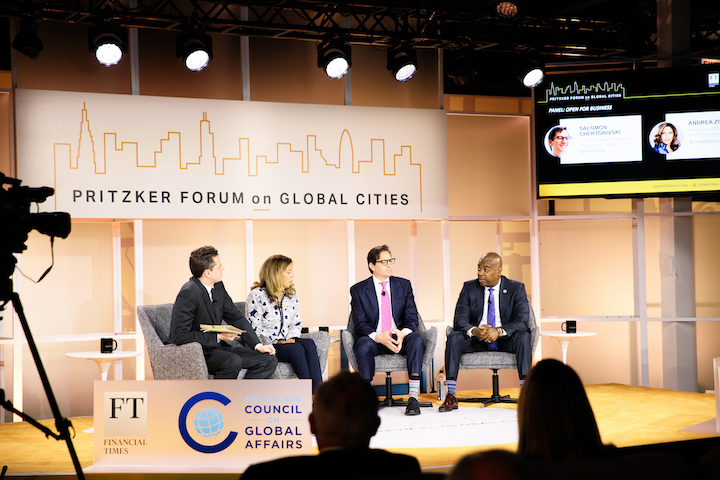 CHICAGO—For the fifth year in a row, Agency EA partnered with the Chicago Council on Global Affairs to produce the Pritzker Forum on Global Cities. The multi-day international conference, which took place June 5 to 7 at Revel Fulton Market in Chicago, brings together global leaders, city officials, and key decision makers to share ideas and insights on the future of cities and to discuss solutions for advancing them.

In addition to on-site panels, intimate discussions, flash talks, workshops, and informal networking, the event was able to expand its reach by offering an accessible live stream to a broader, virtual audience. “Historically, panel sessions were available to the public to enable locals to take part in the conversation. The venue selection made inviting the public logistically challenging—opting to include a live stream was the next best solution,” explained Elise Farrington, senior account executive at Agency EA.

(The general session was live-streamed via Vimeo, the Council’s Facebook page, and its YouTube channel. The program garnered 3,000 live stream views in total. Watch the video below.)

To cater to both the in-person and online audiences, the Chicago-based brand experience agency rethought the design of the forum's stage and seating as well as the programming, with a focus on the live stream execution. “We evolved the general session experience by considering every component of the show, from the stage set and seating to the content,” Farrington said.

This included a mixture of soft, theater, and cabaret seating, along with charging highboy tables, which “allowed attendees to select the seating and location that would best suit their needs. Attendees could sit closely to the stage and not miss a moment or grab a seat at a side table and work simultaneously. Every area of the audience provided a unique and eye-catching view of the room—ensuring there was no bad seat in the house,” she added.

In addition to accommodating those in the room, the “seating arrangement also developed a unique visual experience for those watching at home,” Farrington explained. “Live stream viewers weren’t seeing the backs of heads per a typical theater-style setup but the faces of the speakers and the forum attendees sitting in the audience. This subtle shift in seating arrangement created visual interest and had at-home viewers feeling like they were part of the discussion and immersed in the audience environment.”

As for the aesthetics, the main stage’s design was inspired by the forum’s overall theme and highlighted the Burnham Plan, a groundbreaking urban development plan for the city of Chicago released in 1909. The backdrop mimicked the look of urban scaffolding with frosted Plexiglass squares and orange semi-opaque vinyl, and had completely evolved from a traditional step-and-repeat with a custom “newsroom” table in 2018 to a custom-built concept in 2019, Farrington said.

“Knowing that the live stream viewership would be larger than the in-person audience, we strategically selected vendor partners that seamlessly integrated A.V. into the main stage experience to guarantee high production value for both in-person and online audiences,” she said.

As event technology such as live-streaming and on-demand video continues to advance, designing for the audience at home is becoming just as important as designing for those on site. “Oftentimes, event producers emphasize the importance of one over the other; with the increasing demand for live stream capabilities, planners must execute both well,” Farrington said. “Make the viewer want to continue watching. Design a backdrop that creates visual interest, avoid materials that reflect, and don’t pursue designs that lack depth or appear flat.”