On Monday night, the fourth annual Shorty Awards crowded the TimesCenter with more than 650 people, a diverse group that included Mayor Michael Bloomberg, Foursquare co-founder Dennis Crowley, Occupy Wall Street activists, and the Columbia University School of Journalism's dean of student affairs, Sree Sreenivasan. The assortment of personalities was nothing new for the event, Sawhorse Media's effort to recognize the best content creators in social media, especially as digital platforms attract more than just those in the technology trade.

What was different was the level of attention paid to the Shorty Awards, which, since its inception in 2008, has seen more and more mentions in national and international news outlets like The New York Times, The Washington Post, Forbes, and BBC News. In 2010, Renegade marketing agency C.E.O. Drew Neisser called it the "Oscars of social media" in a blog post for Fast Company. Much of that growth can be attributed to social media's rise in cultural prominence as well as the year-round effort made by the event's organizers to sustain interest. In fact, the endeavor started by Sawhorse C.E.O. Greg Galant and chief technology officer Lee Semel has its roots in Twitter—the medium through which the public can nominate someone for a Shorty—and also posts interviews with winners on YouTube, shares photos through Flickr, and broadcasts the ceremony via Livestream.

"When we launched the site [for the Shorty Awards], we thought it would be 10 friends in a bar in Brooklyn—that would be the ceremony and that's the end of it," said Galant. "Within 24 hours of launching, the nominations got so viral that it became a top 10 trending term on Twitter." Two months later, in February 2009, the first award show was held at Dumbo's Galapagos Art Space with 400 attendees. From there, Galant and his cohorts have expanded the brand, hiring a production team, getting sponsors like PepsiCo, and more than doubling the number of nominations. (This year, organizers fielded some 1.6 million tweet nominations, up from 750,000 the year before.)

The company sees its approach to production as very different from other award shows. "We really treat both the online and the [physical] event as equals, not just one as a marketing tool for the other," said Natan Edelsburg, the supervising producer of the Shorty Awards and Sawhorse's vice president. That translates to building the site and different components long before the show takes place and finding organic ways to integrate partners. "The way we work with sponsors is that we create categories together with them as part of a bigger partnership," said Edelsburg. "This year, we worked with Anthem Blue Cross Blue Shield's 'Health. Join In.' to launch the Social Fitness Shorty Award, where the whole point of it was to use our voting platform and awards show to honor someone who's sharing healthy-living tips."

However, the producers are wary about growing too fast. "The one thing that's really challenging is learning how to scale without falling into the trap of doing what every other award ceremony does," said Galant. "It's about reacting to the road and not the map. In other words, it's not saying we want to end up like some industry show, but taking a fresh approach to it and making a show that's fun to go to and watch." For the entrepreneur and his team, it's bringing the disparate set of people together, having hosts like The Daily Show's Samantha Bee and Jason Jones, and allowing attendees to do what they do best: post messages and photos to Facebook and Twitter, check in on Foursquare, and network.

Following the ceremony, which saw awards go to the F.D.N.Y., N.A.S.A., Justin Bieber, video game The Sims 3, and N.P.R.'s Andy Carvin, guests took transportation provided by sponsor GroundLink to the Tribeca Grand for the after-party. 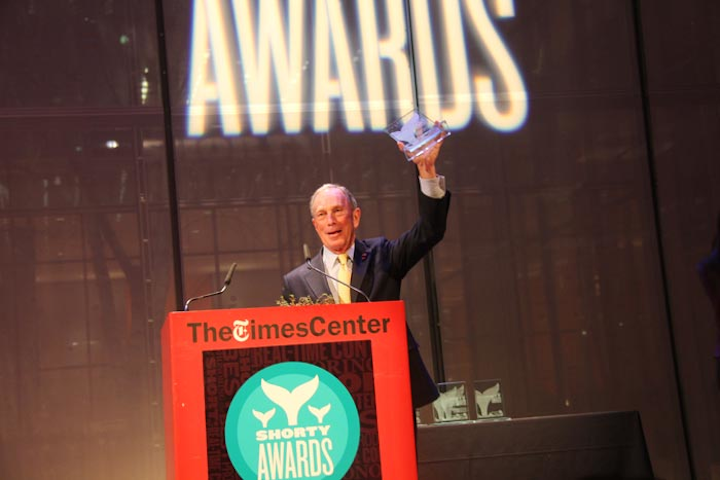 After attending a New York Knicks game earlier in the evening, Mayor Bloomberg stopped by the TimesCenter to pick up his award for Foursquare Mayor of the Year.
Photo: Courtesy of the Shorty Awards 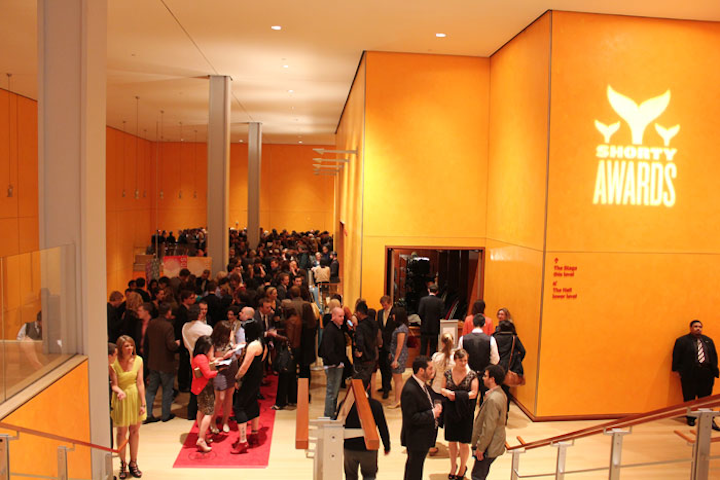 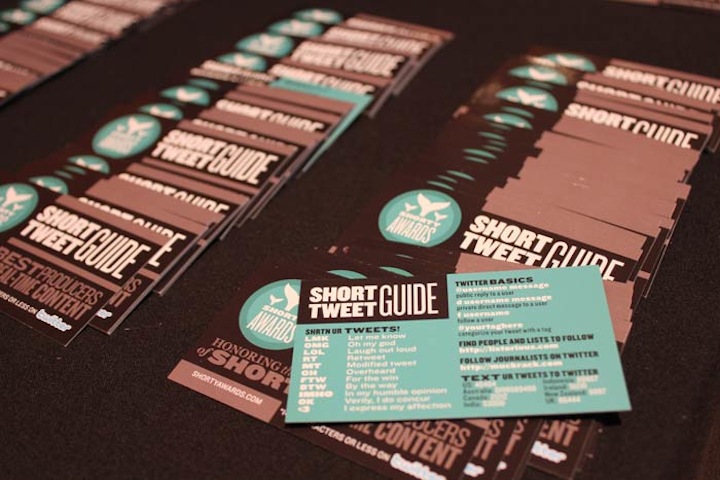 At the registration tables, guests picked up their tickets for the show, lapel pins that designated their level of access, and the night's program. As a fun addition, the organizers provided business-card-size guides for posting messages on Twitter.
Photo: Anna Sekula/BizBash 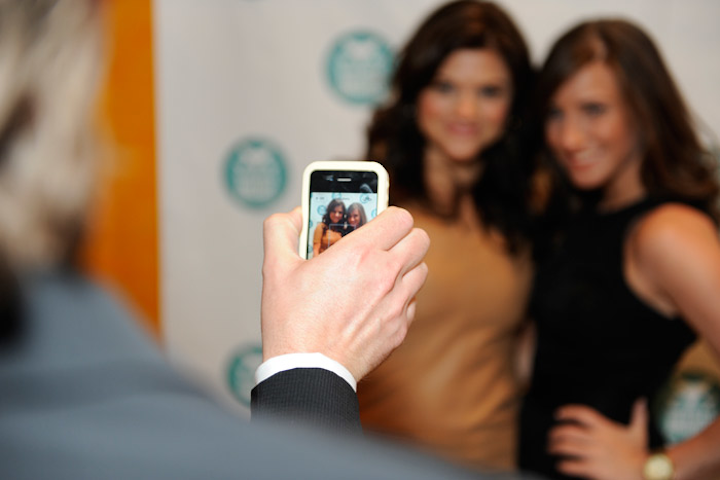 Attendees were encouraged to use their mobile devices at the event, snapping shots of celebrities like Tiffani Thiessen on the red carpet and tweeting comments during the live show.
Photo: Courtesy of the Shorty Awards 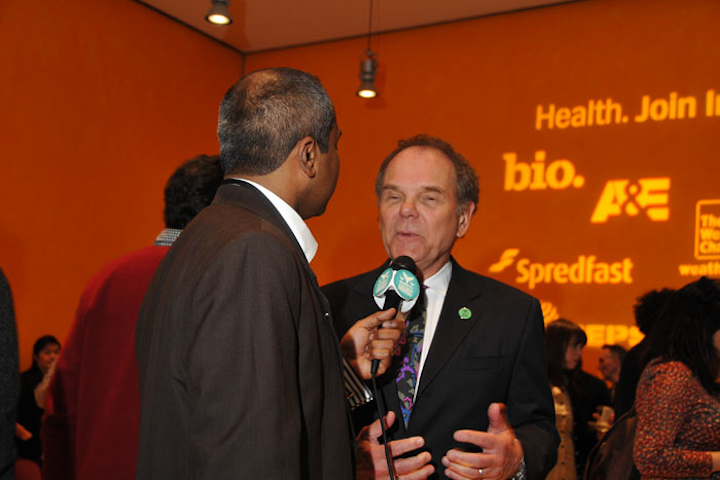 Columbia University's Sree Sreenivasan was part of the judging panel for the Shorty Awards, known as the Real-Time Academy of Short Form Arts & Sciences. At the event, the professor interviewed guests, nominees, and winners for the event's YouTube channel.
Photo: Courtesy of the Shorty Awards 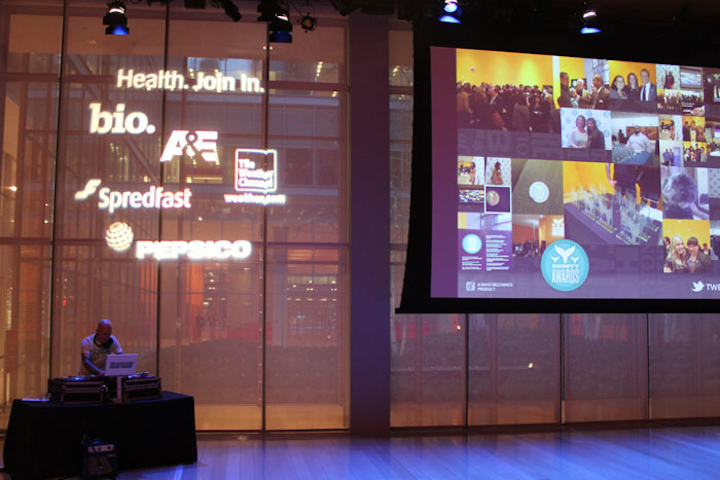 To keep the mood upbeat and create what Sawhorse Media C.E.O. Greg Galant refers to as a "fun party," a DJ on stage in the theater played tunes like Michael Jackson's "P.Y.T. (Pretty Young Thing)," "Girls & Boys" by Blur, and Marvin Gaye's "Got to Give It Up."
Photo: Anna Sekula/BizBash 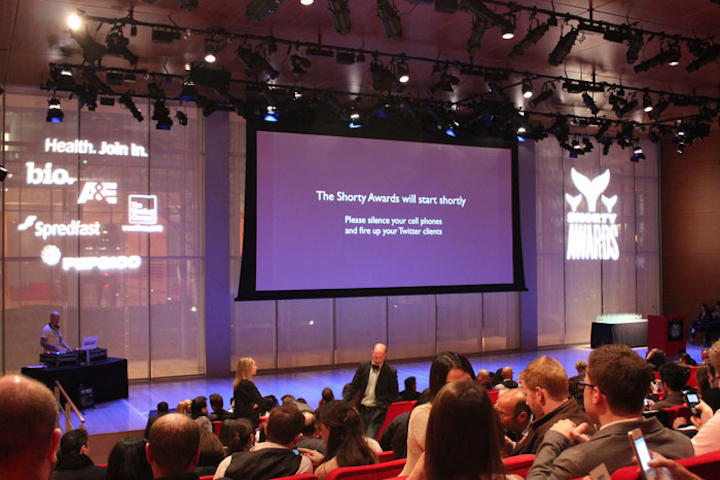 Shortly before the ceremony began, organizers instructed the audience to silence their cellphones, but turn on the Twitter application.
Photo: Anna Sekula/BizBash 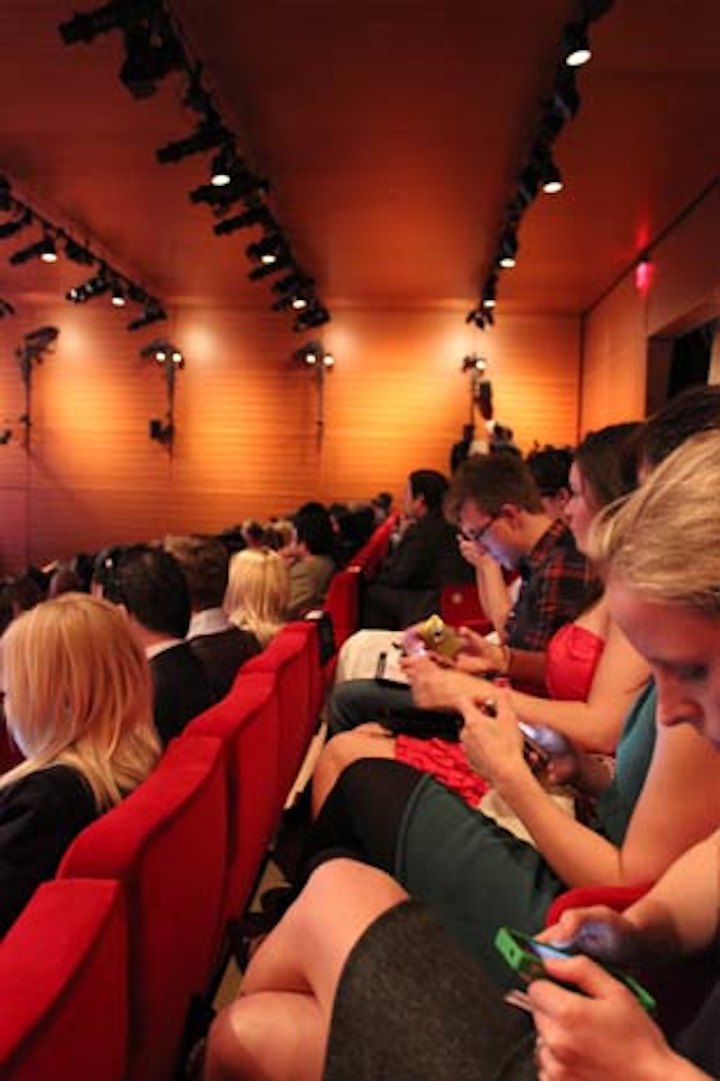 At a glance, the attendees in the theater might have appeared unengaged, but many were, in fact, tweeting about the awards. An on-site task force promoted comments made via Twitter to a live feed that was displayed on screens at the event.
Photo: Anna Sekula/BizBash 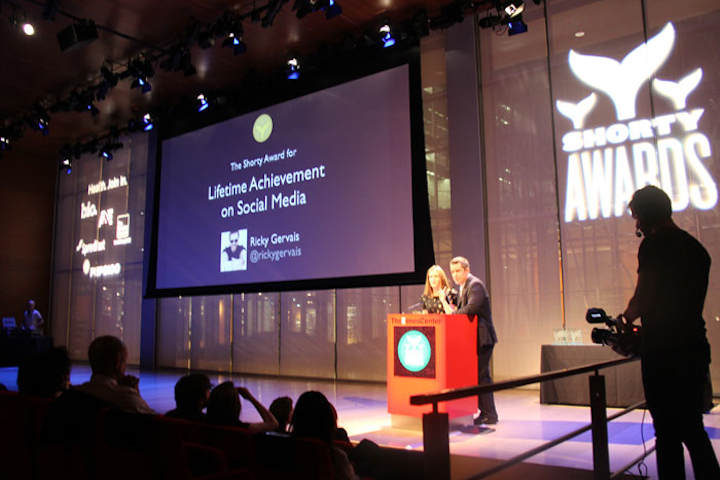 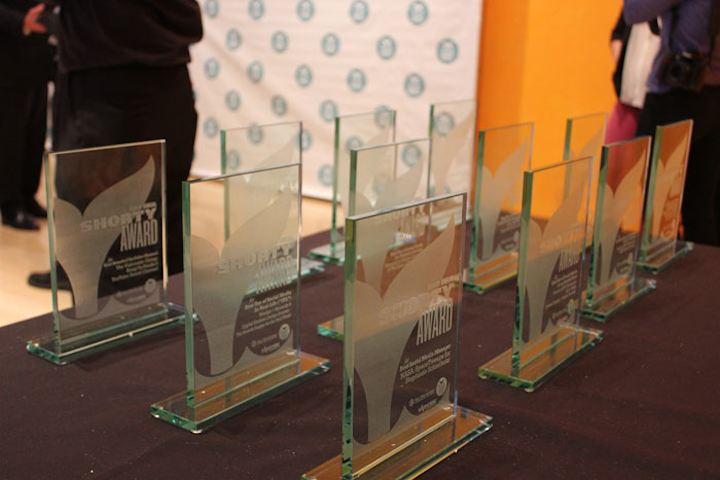 The live event on Monday night handed out more than 30 awards; the winners were announced, but not brought to the stage. The list included KungFu Panda 2 for best branded YouTube channel, SpongeBob Square Pants for best overall brand presence on Facebook, and MTV's V.M.A. Twitter tracker for best use of social media in a mobile campaign.
Photo: Anna Sekula/BizBash 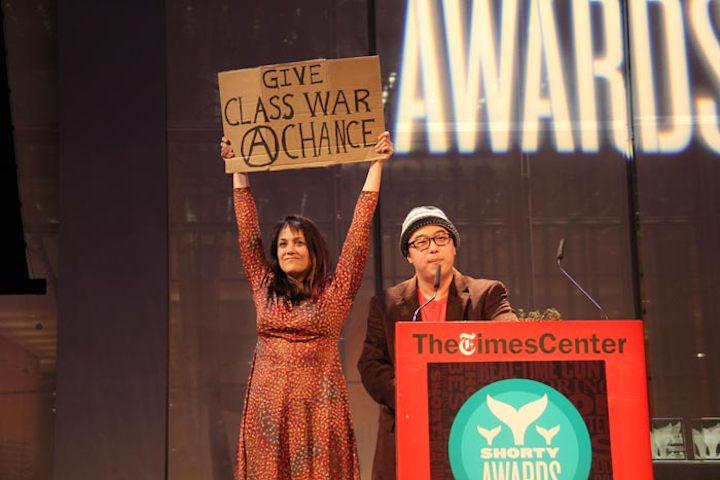 Priscilla Grim (pictured, left), creator and co-editor of We Are the 99 Percent, won the award for best microblog of the year on Tumblr.
Photo: Courtesy of the Shorty Awards 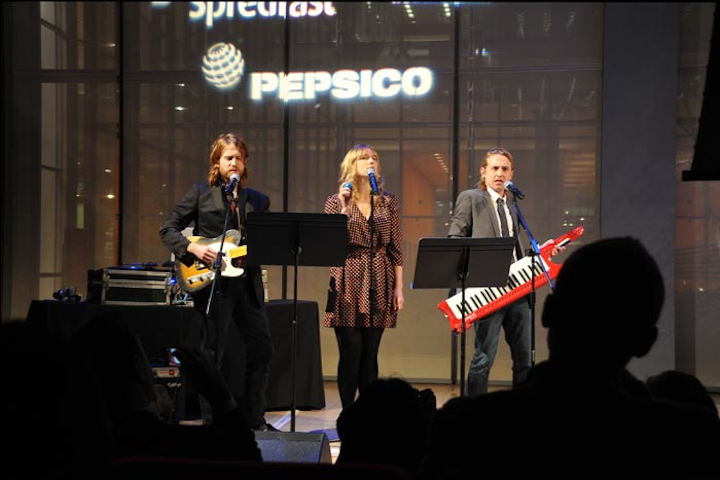 Viral video band the Gregory Brothers performed a musical parody of the year's events, complete with photos displayed on the main screen, during the show.
Photo: Courtesy of the Shorty Awards
More in Event Production & Fabrication