This season's Fashion Week could be summed up in one word: Personal. While most designers consistently make some sort of concerted effort to showcase their designs in unique settings, the fall collections at Mercedes-Benz Fashion Week in New York, which concluded February 14, seemed to have an extra dose of intimacy and customization that sent a strong message of natural extension over forced showmanship.

Whether the venues were grand—in the case of Alexander Wang and Marc Jacobs—or cozy à la Jason Wu and Thom Browne, guests were transported into designers’ psyches this season more so than ever. The Row, meanwhile, under the auspices of Mary-Kate and Ashley Olsen working with Bureau Betak, even went so far as to fully furnish a Beaux Arts townhouse to create the most proper environment in which to showcase designs.

New York shows, for the most part, have typically taken a more straightforward path when it comes to venue choices—largely juxtaposed against their Parisian counterparts. But this season, the noticeable uptick in attention paid to presentation by many designers made for multiple memorable moments in what would otherwise have been a haze of nonstop shows and presentations. 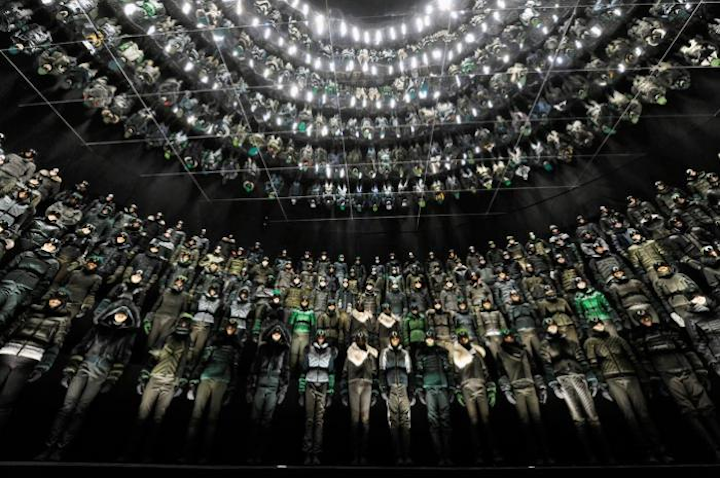 Under the direction of Villa Eugenie, Gotham Hall was transformed into a jaw-dropping scene that seemed to transport guests straight into an après-ski party for the Moncler Grenoble collection show. Risers as high as 40 feet mimicked mountains, supporting 370 models clad in all green (a nod to a forest), while the ceiling of the blacked-out tent was mirrored to give the illusion of infinite models on display. Set to a soundtrack of heavy beats, the presentation was mostly dark, save for the bursts of light that flashed overhead like a strobe.
Photo: Stefano Masse 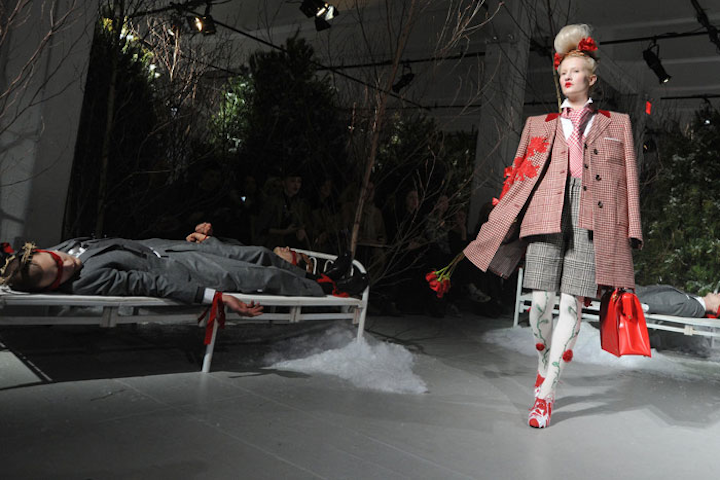 For his first-ever women's runway show, Thom Browne created his own vision of a winter wonderland at Center548. Guests entering the studio space found an ominous winter forest complete with fake snow on the ground and an elaborate tableau of tree branches delicately placed throughout. As the female models casually sauntered down the runway, they flirted with lifeless-looking male models, who were clad in Browne's menswear, sported crowns of thorns, and were blindfolded and bound to metal bed frames with blood-red strips of fabric.
Photo: AP Photo/Louis Lanzano 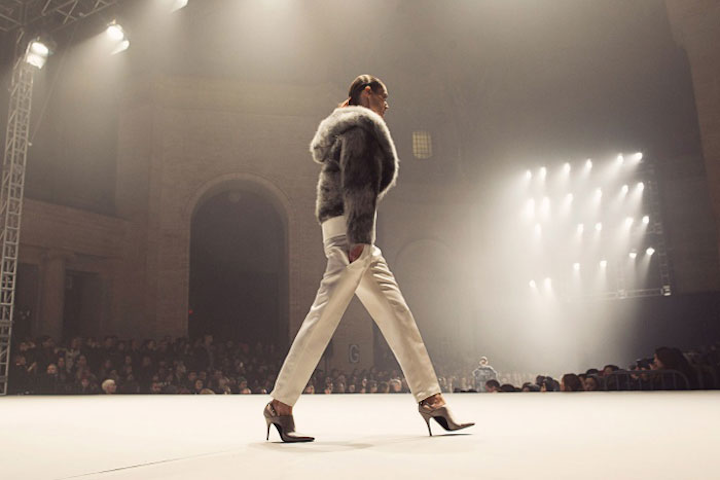 A dramatic 180-degree change in venue from last season's Pier 94, Alexander Wang chose the iconic Cunard Building at the southernmost tip of Manhattan to stage his fall show, produced by Prodject. With soaring marble walls as the backdrop, the dimly lit venue, with its purposeful haze and smoky ambience, had models walking a multitiered runway, the center of which was elevated nearly five feet high and allowed for the models to be on "display."
Photo: Victoria Will 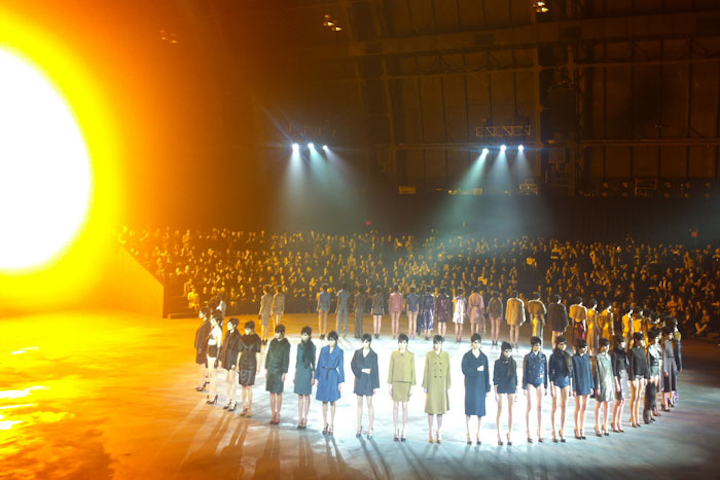 The Marc Jacobs show, delayed by four days due to sample delivery issues, came with a strict mandate this season: no flash photography allowed until the finale. Guests arriving at the 69th Regiment Armory were greeted by a massive indoor "sun" installed in the circular runway space, designed with Stefan Beckman and a reference to artist Ólafur Elíasson's weather project (a 2003 installation at the Tate Modern in London), that cast a monochromatic sepia light throughout the venue. As the models emerged for their second walk leading up to the finale, the light turned white, showcasing the collection's true colors and attention to detail.
Photo: Catherine Iftode 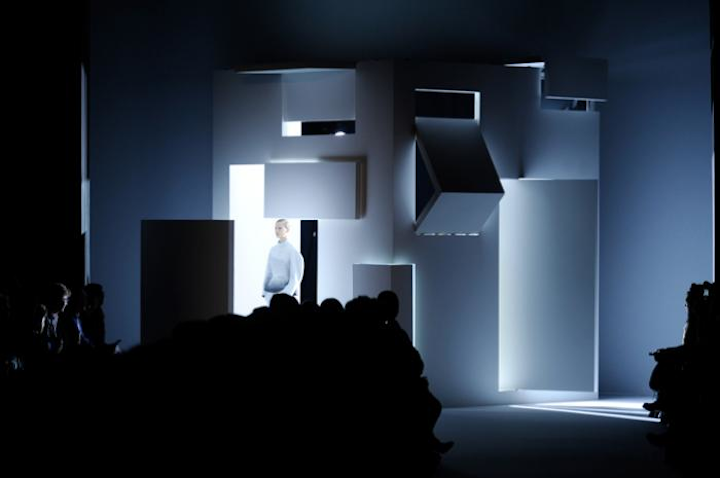 For its fall show at the Lincoln Center tents, Lacoste show producer Alex de Betak of Bureau Betak constructed an 18- by 18-foot cube that had seven openings, the slots of which opened and closed to a soundtrack. Constructed from old-fashioned mechanics, all manually operated, the workings of the box were inspired by the explorative and transformative nature of the collection, which was both futuristic and soft at the same time.
Photo: Yannis Vlamos 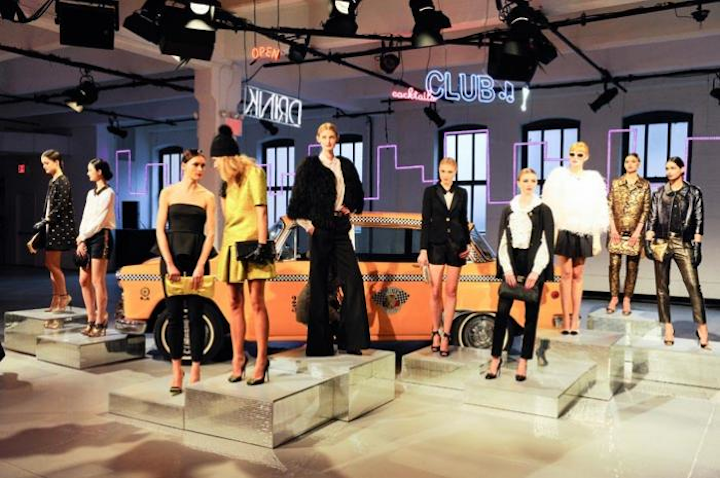 To celebrate its 20th anniversary, Kate Spade's fall presentation, held at Center548, lived up to its "Vintage New York" theme, incorporating a bevy of yellow checked cabs in the center of the venue. Models surrounding the taxis, clad in outfits that featured whimsical urban icons like hot dogs, street signs, and the Empire State Building, were bathed in a plethora of neon lights while a backdrop Kate Spade New York logo wall was even tagged with pink graffiti.
Photo: Dean Neville/BFAnyc.com 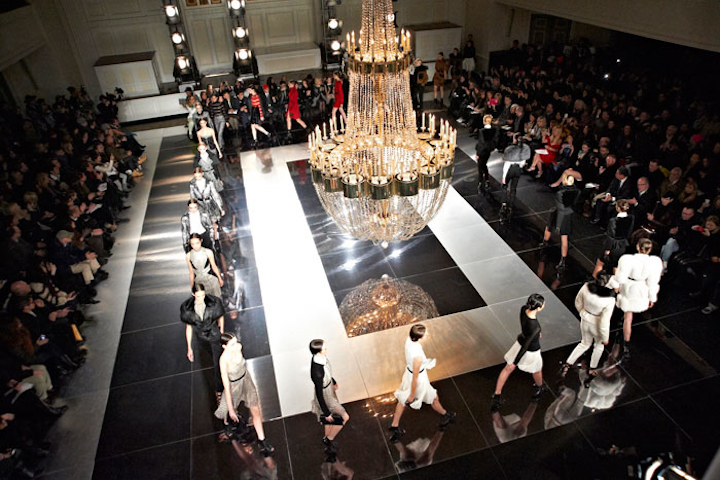 After multiple seasons of showing in vast downtown spaces, Jason Wu opted for the uptown glamour (and intimacy) of 583 Park Avenue. His fall show, entitled "Extreme Femininity" and produced by Bureau Betak, was set up in a square formation with models walking along a glossy black-and-mirrored runway around a massive crystal chandelier that hovered in the middle of the runway and was hung low to the ground.
Photo: Courtesy of Bureau Betak 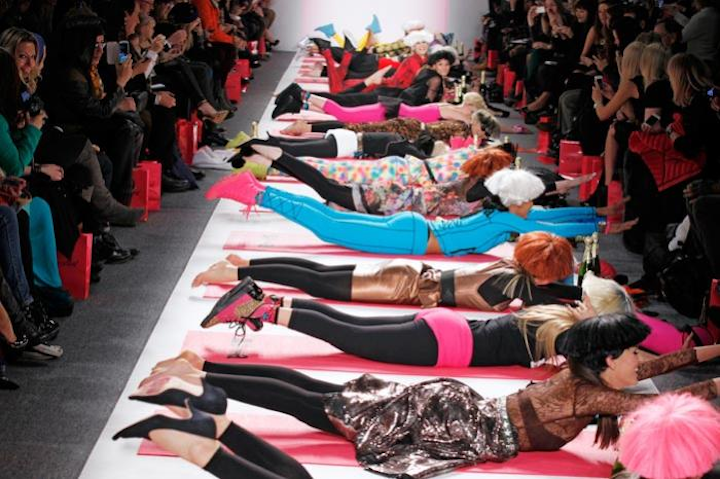 To introduce her new activewear collection, Betsey Johnson enlisted a troop of models to join her on her fall runway at Lincoln Center for an engaging workout. The show, a precursor to Johnson's workout video premiering on her upcoming reality series, featured models chatting on cell phones strutting down the runway as they lined up on pink yoga mats emblazoned with the show's theme, "BJ Kicks A." Once in place, each model performed an exercise routine using leopard-print tights as stretch bands and champagne bottles as dumbbells. The event was produced by the brand's in-house team alongside LDJ Productions.
Photo: Dan & Corina Lecca 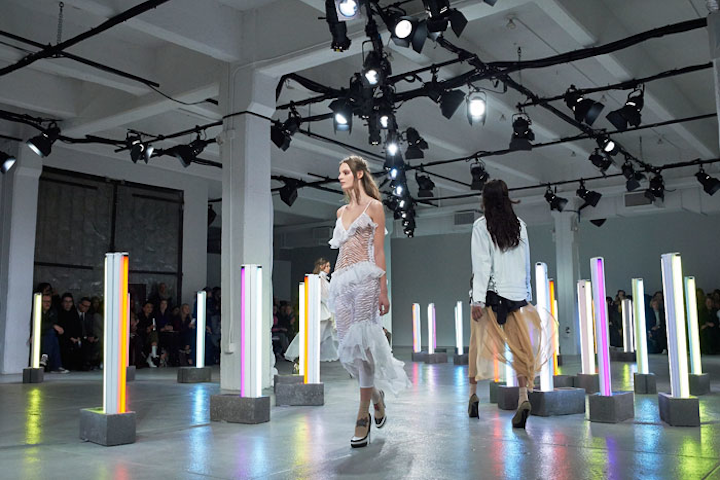 Inspired by memories of their California childhood, Rodarte designers Kate and Laura Mulleavy sought to bring to life their upbringing with the runway backdrop for their fall show. Produced by Bureau Betak and staged at Center548, models walked through a forest of multicolored fluorescent lights set in cinder blocks, reminiscent of a Dan Flavin installation, that channeled the Santa Cruz boardwalk's brightly lit amusement rides in a modern way.
Photo: Courtesy of Bureau Betak 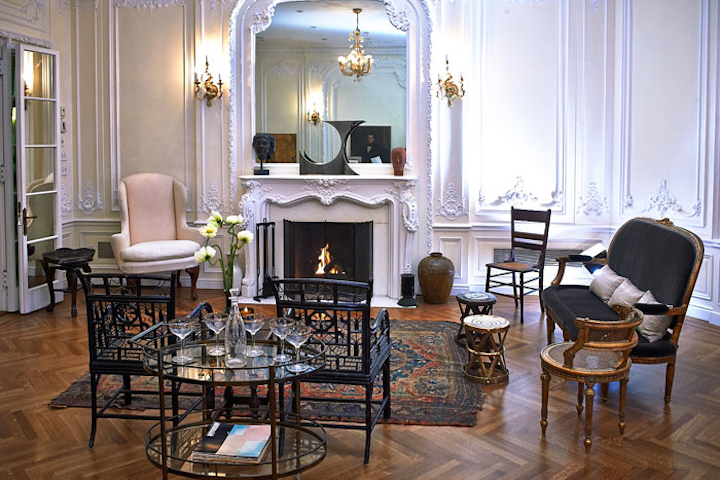 Eschewing last season's breakfast presentation at the Carlyle, Mary-Kate and Ashley Olsen rented out a 14,000-square-foot Beaux Arts townhouse on the Upper East Side for their fall showing of the Row. The sisters utilized two floors of the seven-story mansion for the show, working with Bureau Betak to create individual vignettes in each room that maintained a cohesive link. Flowers by Raquel Corvino, rugs by Sharkstooth Rugs, furniture by City Foundry, art by DARR and Mantiques Modern, and props by Bureau Betak all helped create the environment in which to showcase the collection.
Photo: Courtesy of Bureau Betak
More in Event Production & Fabrication 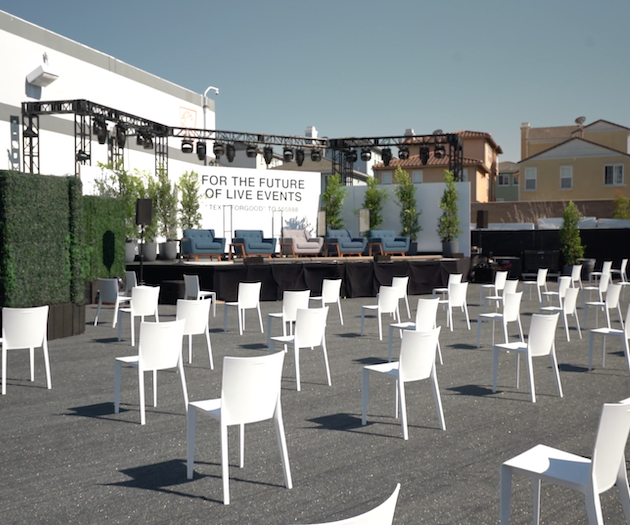