Why the Secret Service Escorted Show Horses Through Central Park

Secret Service escorting horses and their groomers through Central Park isn’t a sight often seen. But when an equestrian show a year in the making coincides with a historic papal procession through the same green space, event organizers have no choice but to roll with the punches.

“The pope’s visit definitely had an effect on the operation of the show on [Grand Prix] Friday but, overall, there weren’t too many obstacles that we couldn’t work through,” said Winick, who worked closely with the parks department.

Among the chief interruptions were vendor-provided basic services—refueling of generators, dumpster picks, bathroom servicing—that all had to be rescheduled until after the pope left Central Park. “While relatively invisible, these elements are important to a smooth-running event,” noted Winick, who was simultaneously working on the papal Mass at Madison Square Garden, the Clinton Global Initiative Annual Meeting, and the Global Citizen Festival that weekend.

Before last year, show jumping was last seen in New York City’s Central Park in 1981 and at Madison Square Garden in 2001. Delivery of the horses to the park each night had to remain fluid; horse trailers had to leave earlier in the day, and newly arriving horses had to push up their delivery times. Access to the horse show itself also kept getting changed on the production staff.

“Regardless of what we were told by the N.Y.P.D. or Secret Service, there were changes in the plan that we would have to push back on and say, ‘Hey, this isn’t what you told us,’” said Winick. For example, access initially granted to operate on East Drive and Center Drive in the park was rescinded without warning when the pope’s motorcade, whose schedules are not revealed in advance, decided to travel up and down Fifth Avenue.

But perhaps the main challenge was getting the horses from the stable area at Ballfield 3, which was right off the papal route and in the frozen zone, to Wollman Rink—which was not. The solution was to have the Secret Service escort each horse and groomsman back and forth during the walk down the path that connected the two venues. Secret Service also wanted to check each rider and support staff upon every return, but equestrian protocol wouldn’t allow for the horses to stop along the route. So Secret Service had to be briefed on a way that would be safer for the horses while maintaining security protocol. “That was probably the only part of the operation that was totally impacted by the papal park procession,” Winick said.

However, the heavy security presence made certain things easier: Riders didn’t have to deal with the regular crush of passersby moving around the park as the horses went from the stables to the rink and back again.

Overall, the 10-day build went off without a hitch after adjusting some schedules and moving the majority of heavy-duty functions—including a crew of 60 unloading more than 60 dump trucks of dirt—to overnight operations.

“There’s no direct path into Wollman Rink as it’s built like a moat, so it’s all about trucking and keeping it very safe with traffic cones and lookouts,” said Winick. “There are people in Central Park around the clock; it’s not like going to a polo field where you can just drive up.”

Also, Wollman Rink doesn’t have a lot of extra power, so everything from the lighting in the V.I.P. tent to the video board to the TV compound on East Drive was all powered by individual generators.

“Most venues aren’t dealing with an active public like Central Park—both day and night,” said Winick. “You can’t shut down the park.”

Well, unless you’re the Pope. 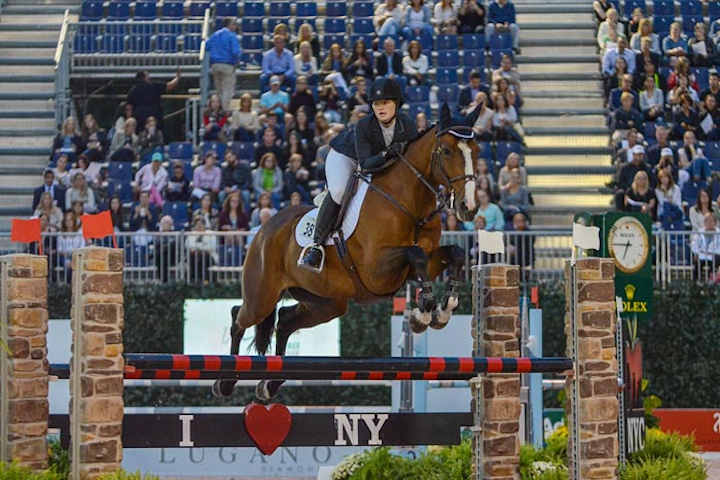 The second annual Central Park Horse Show, which ran from September 23 to 27, drew more than 12,000 spectators—this, despite a papal visit to Manhattan that threatened to completely block traffic. Fortunately, Wollman Rink was not in the frozen zone, and visitors were not subject to security checks in order to enter the park or the venue.
Photo: Courtesy of the Central Park Horse Show 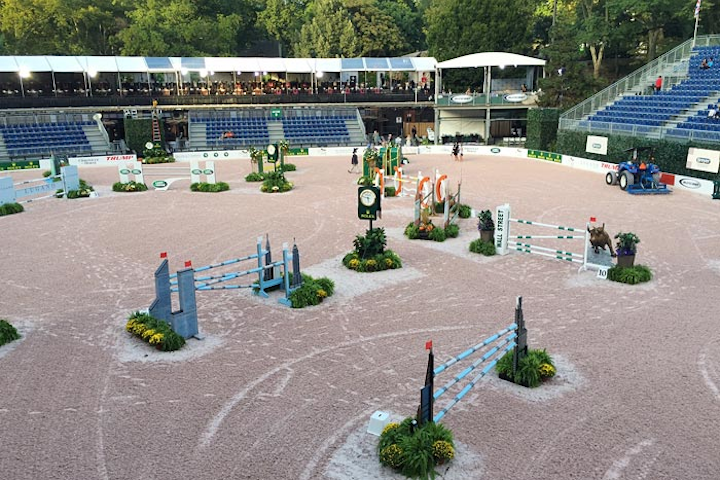 Noted course designer Guilherme Jorge, who designs the Hampton Classic course each year as well the upcoming Rio 2016 Olympics equestrian course, had only about 25,000 square feet of usable space at Wollman Rink to work with. “More than the area itself, the biggest challenge was designing a course around the triangular shape of the ring,” he said. “I had to devise a track that would allow the riders to get the best approach with each obstacle.”
Photo: Jim Shi 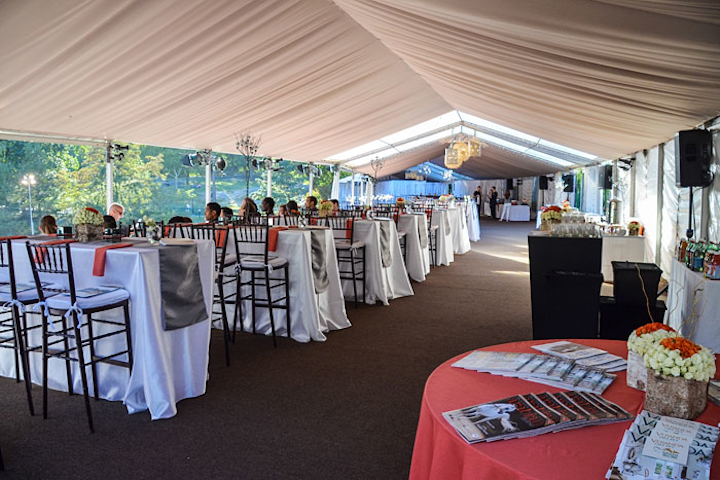 The aptly named Veranda dining area was erected on a custom platform covered with stock tenting. The custom dinner configuration, with buffet food and beverage service provided by Relish Catering, ran the length of about 150 by 30 feet as a long, narrow venue. It was elevated about four feet to maintain an optimal sight line to the course. The Treehouse venue located directly across the course required a slightly more complex build out because it had to be designed around existing landscaping and trees. Access to that V.I.P. viewing area was via a completely separate entrance and its own exterior gate, which required cutting open existing fencing.
Photo: Courtesy of the Central Park Horse Show 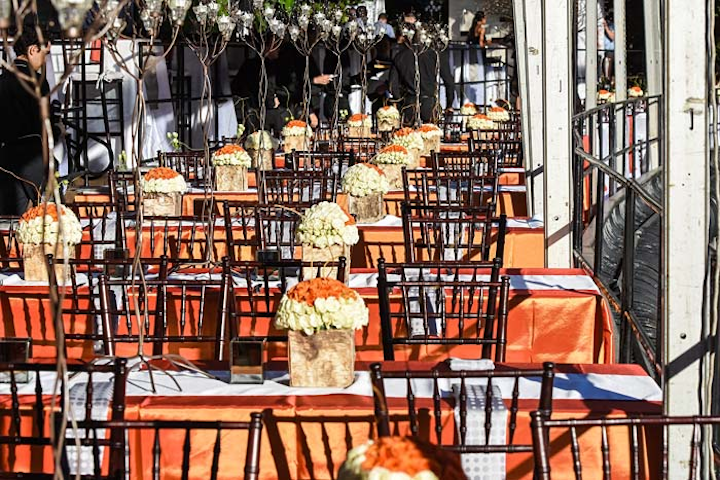 A uniform autumnal flavor highlighted each of the vertical dinner tables inside the V.I.P. tent. Low centerpieces allowed for clear sight lines while, at night, electronic votives placed on taller branch vignettes provided a cozy ambience. Sponsor brands, like Rolex, were free to add elements to customize their tables.
Photo: Courtesy of the Central Park Horse Show 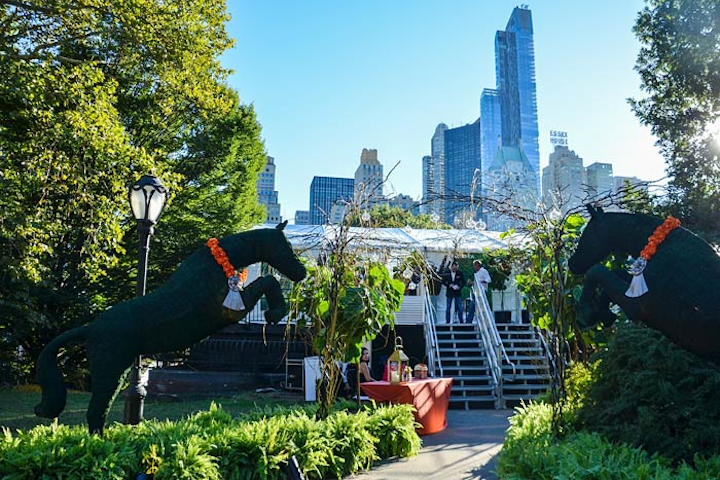 As with all the structural components to building the course, the large horse-shaped topiaries, not to mention even the simple plantings, had to all be trucked in overnight and pieced together by hand during the day. The topiaries echoed the event occasion and were placed at the exterior entrances to both the V.I.P. dinner tent and general admission. It also made for a social media moment with tourists and the general public as they were placed on public pathways.
Photo: Courtesy of the Central Park Horse Show 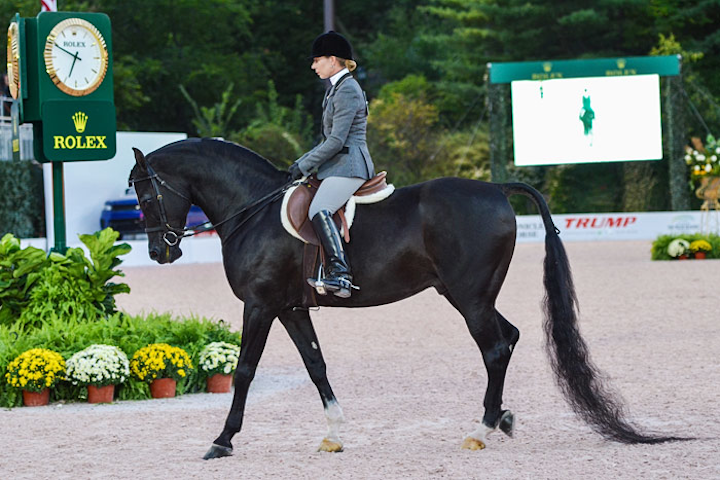 Presenting sponsor Rolex did not operate an on-site pop-up or have its timepieces on display, but the watchmaker did erect several oversize clocks inspired by its iconic Datejust timepiece. As is typical, the branding was also wrapped across multiple on-course structures of high visibility.
Photo: Courtesy of the Central Park Horse Show 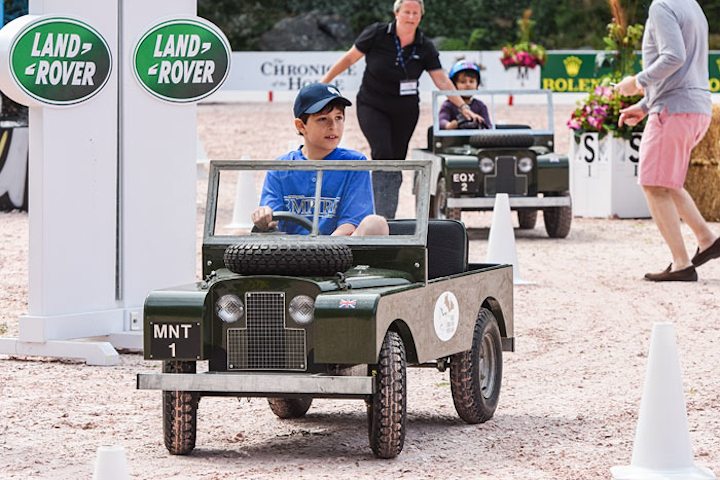 Land Rover North America returned as the official vehicle of the show and sponsor of the New York team led by captain Georgina Bloomberg. As part of its partnership, the brand displayed a 2015 Range Rover Sport SVR edition on the course in full view of all attendees. In addition, Land Rover offered a minicar driving experience during the morning throughout the weekend.
Photo: Courtesy of the Central Park Horse Show 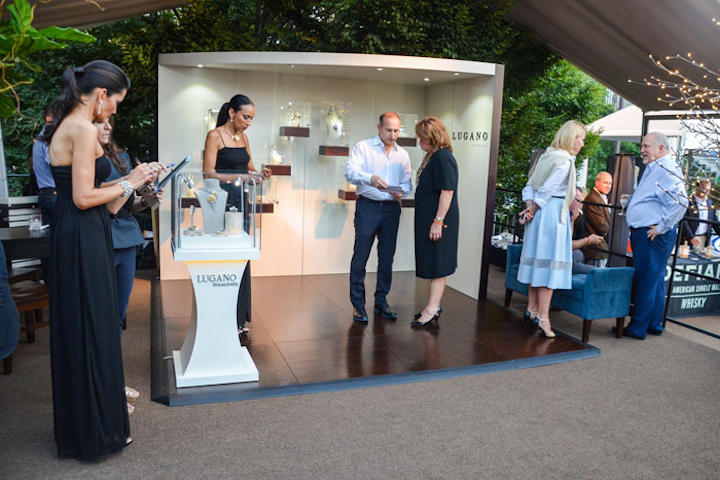