The Council of Fashion Designers of America awards gala embraced a more playful tone this year, featuring politically tinged speeches and a commitment to sustainability.

Color was king at the 55th anniversary Council of Fashion Designers of America awards gala, where the extravagance of the black-tie affair's previous iterations was softened in favor of a crisp and more playful format.

For the June 5 event at the Hammerstein Ballroom, KCD’s team—led by president and partner Julie Mannion—worked alongside C.F.D.A. C.E.O. and executive producer Steven Kolb. However, several changes were made to the creative teams. After years of working with Laird & Partners, the awards enlisted the Creative Group, part of Condé Nast, to develop all of the print and digital materials surrounding the event. In addition, set designer Stefan Beckman was brought in as the awards’ first design/creative director—charged with unifying all the elements from arrivals to cocktails to dinner to stage. Beckman worked with the Creative Group on those chief aesthetic elements, while KCD produced the awards and Nian Fish and Natane Boudreau of N&N Films devised the honoree tribute films.

The arrivals experience grew exponentially this year, with a tent taking up most of West 34th Street. Past and current C.F.D.A. nominees and winners’ images and quotes (also distributed as a poster and plastered around the city leading up to the event) filled the 100-foot-long tent in striking pastel hues. The traditional red carpet was replaced by one with bright jewel-tone stripes in pinks, greens, and blues. This aesthetic carried into the lobby, which was bathed in the color palette and led to an Instagram Hall of Mirrors interactive video vignette.

“It’s about creating experiences that aren't just static but that involved movement,” said Beckman, adding that the Hall of Mirrors was then erected in the Instagram headquarters following the awards.

As for the ceremony itself, content was delivered on nine screens rather than on a single screen, as in the past, evoking a mosaic concept that was among the inspirations for the event design. The Creative Group and N&N Films used all nine screens to create dynamic, mosaic-like content that gave a more personal look into the lives of each of the nominees and winners.

“Transforming Hammerstein with color and not just having guests dine and dash was paramount,” said Beckman, whose teams took five days to load in and build. “In retrospect, what was interesting was that guests hung out and relaxed in the space and enjoyed the venue as opposed to leaving. It was interactive; people were enjoying the moment and engaging.”

Swarovski celebrated its 16th year as partner of the awards by incorporating more than 87.5 million crystals into all decor: 55 tabletop lanterns, three bespoke chandeliers, more than 4,000 crystals in a Swarovski Winner’s Walk backdrop, and the crystal rock lectern on stage.

The evening’s one live fashion moment came during Rick Owens’s Lifetime Achievement Award. Nian Fish and Owens surprised the audience by having models descend from the rafters, pose on stage in a desert tableau, then march into the audience and out of the ballroom. “It made for a strange, surreal, and cool visual that broke up the films,” noted Beckman.

Given the current political climate, it was almost expected that someone would address President Trump’s policies and agenda. The ceremony began with von Furstenberg, chairwoman of the council, asking all of the many immigrants in the room to raise their hands. This was bookended by honors bestowed upon a distinguished group of immigrants who have revamped American beauty and fashion brands, including Pat McGrath, Raf Simons, and Monse’s Laura Kim and Fernando Garcia. The final presentation honored feminist icon Gloria Steinem, Cecile Richards of Planned Parenthood, and the singer/actress Janelle Monáe for their work in the Women’s March on Washington. Following the trio’s passionate speeches, Los Angeles-based singer-songwriter Eryn Allen Kane performed for the audience. (Not one comment, however, was made about dressing First Lady Melania Trump.)

“We weren't trying to hit everyone over the head, but we had a lot of heart with this awards. ... There was a good heart to everything without all the usual pomp and circumstance,” said Beckman. “It's nice to know we weren't just doing fluff.”

Another significant change to this year’s awards came through a partnership with Conscious Commerce and sponsor Lexus to ensure that everything on the tabletops—from linens to flatware to the food itself—was recyclable and reusable. As a further nod to sustainability, the printed C.F.D.A. Awards journal was discontinued in favor of a digital portfolio. Portraits of the nominees and honorees, back story, and video content all now live in a digital portfolio on CFDA.com.

The menu was devised by culinary designer Jane Coxwell, von Furstenberg’s personal chef, and executed by Hank Tomashevksi. The Middle Eastern-accented dinner included Atlantic salmon with coriander chutney served with lightly pickled root vegetables on a spring carrot and beet puree, vegetable moussaka, and assorted Mediterranean desserts, all paired with Perrier-Jouët Champagne. All produce was grown specifically for the evening at Brooklyn Grange and other sustainable local farms.

Following the ceremony, sponsor Samsung hosted the official after-party at its Samsung 837 space in the meatpacking district followed by an after-after-party at Top of the Standard. 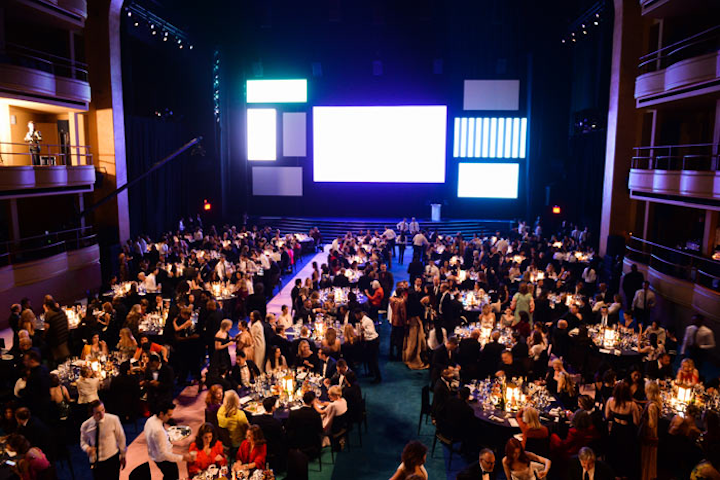 Content was delivered on nine screens rather than a single screen in the past. The Creative Group and N&N Films used the screens, the largest being 30-foot by 20-foot, to create dynamic content that gave a more personal look into the lives of each of the nominees and winners. "The idea of a mosaic became an important starting point for the night," said Beckman. "It truly reflected New York fashion and all its layers."
Photo: Joe Schildhorn/BFA.com 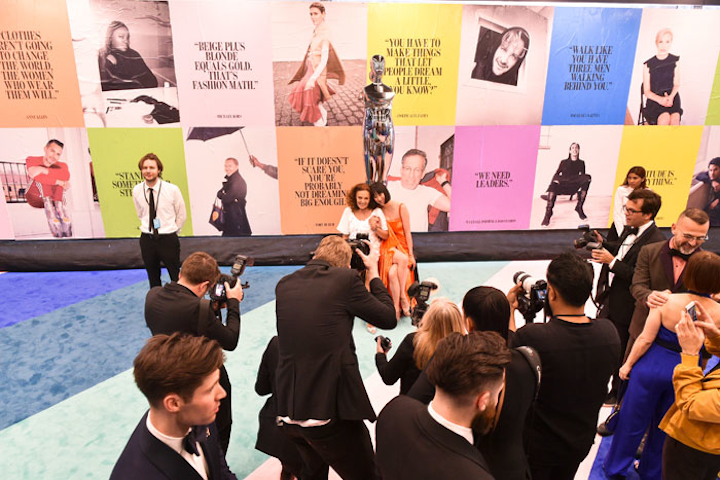 Working with Condé Nast's Creative Group and Nian Fish, executive producer of the honoree films package, C.F.D.A. Awards producer Stefan Beckman devised a step-and-repeat inspired by Andy Warhol's iconic Polaroids. The pastel posters derived from stills from the presentation films were laid on in the same guerrilla marketing-style fashion as they were on billboards throughout the city.
Photo: Joe Schildhorn/BFA.com 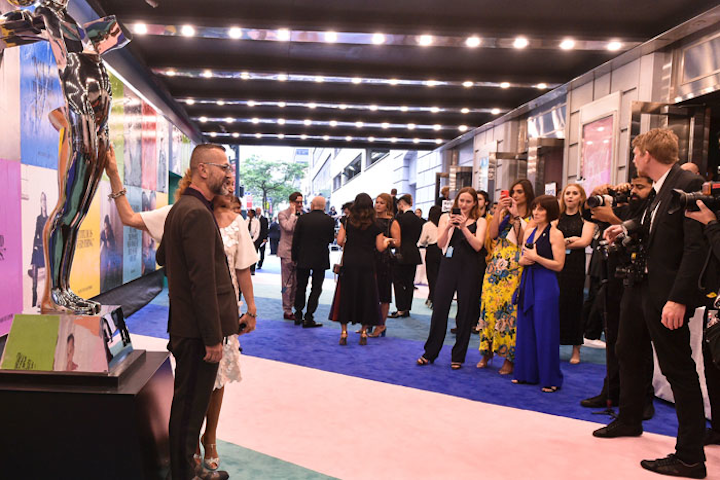 The custom-dyed carpet, in shades of pinks, greens and blues, was rolled straight into Hammerstein Ballroom, creating a unifying effect for guests that read as being seamless. "We approached the awards design with big, broad strokes," said Beckman. "When you got out of your car to entering the venue it was all one big party that didn't feel segmented."
Photo: Joe Schildhorn/BFA.com 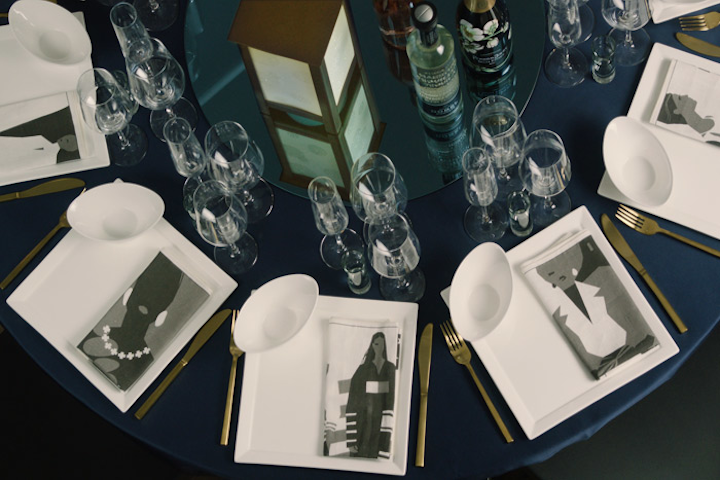 In lieu of floral centerpieces at dinner (they were featured at the Perrier-Jouët Champagne bar instead), Beckman enlisted artist Carlos Aponte to illustrate past Lifetime Achievement Award winners via abstract renderings on 600 dinner napkins that were a nice memento from the evening. "I liked the idea of navy mixed into the stage and tabletops," added Beckman. "Navy was the new black for the night."
Photo: Courtesy of C.F.D.A. 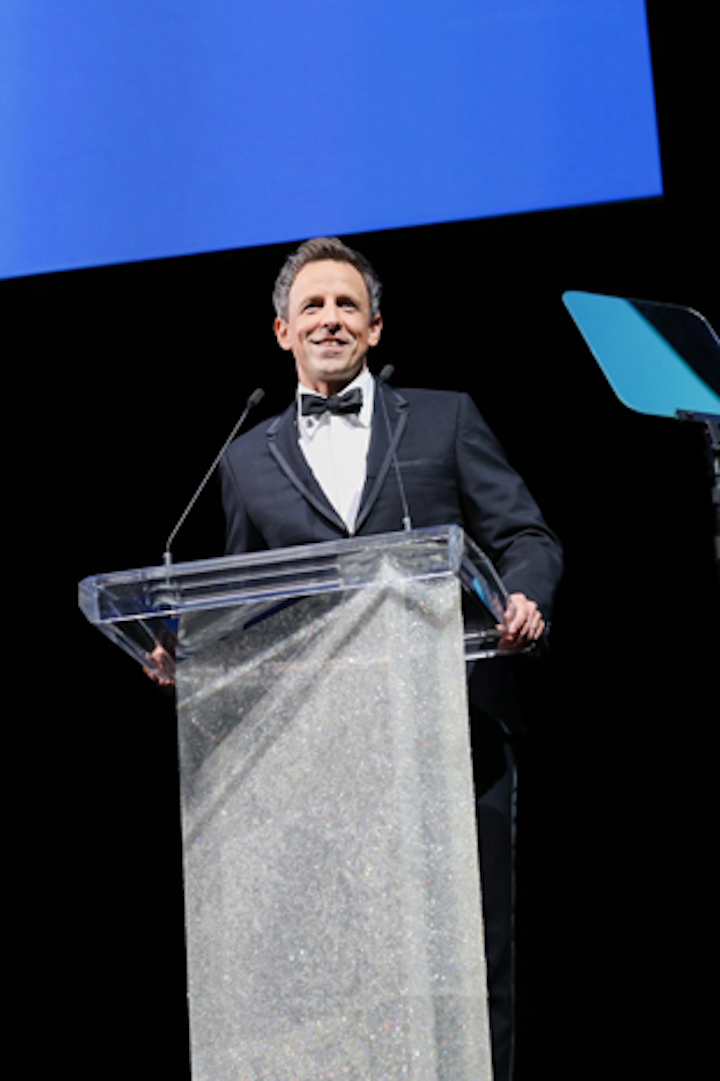 The evening marked Swarovski's 16th consecutive year in support of the awards, and, as with years past, many elements of the decor incorporated the company's signature crystals. In total, 87.5 million crystals were incorporated into the decor including the custom crystal rock lectern that was the focal point on stage. Late Night's Seth Meyers hosted the awards.
Photo: Courtesy of C.F.D.A. 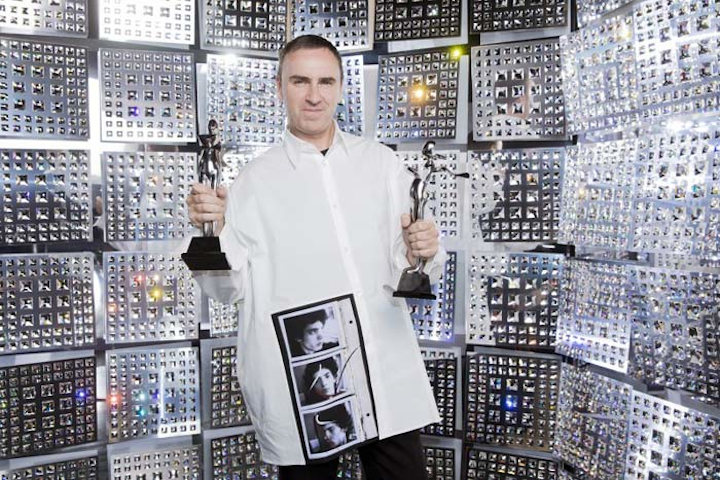 More than 4,000 crystals were incorporated into the Swarovski Winner's Walk that served as backdrop for double-winner Raf Simmons and others who posed for the portrait series by photographer Kevin Tachman. In addition, 110 meters of crystal fabric was hand applied to 55 tabletop lanterns and three bespoke chandeliers that hung in the cocktail area.
Photo: Courtesy of C.F.D.A. 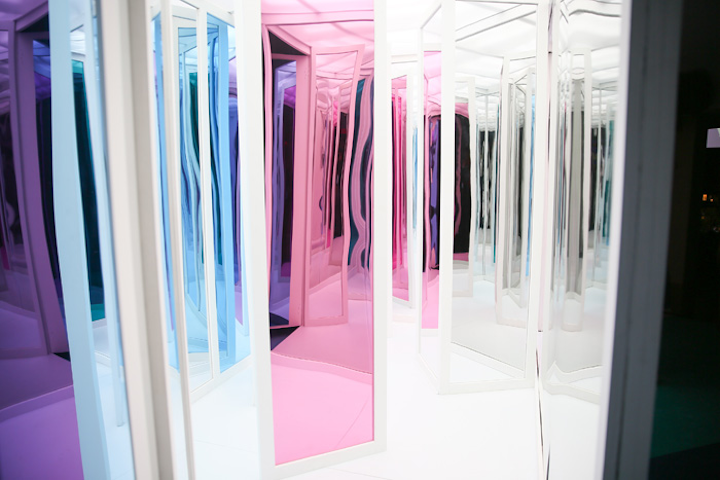 A custom Instagram Hall of Mirrors was set up inside Hammerstein Ballroom. "The colored mirrors were a beautiful, strange kind of object," Beckman said. “We wanted to create experiences that weren't just static, but that involved movement. Most importantly, I didn't want it to feel like it was an afterthought."
Photo: Angela Pham/BFA.com 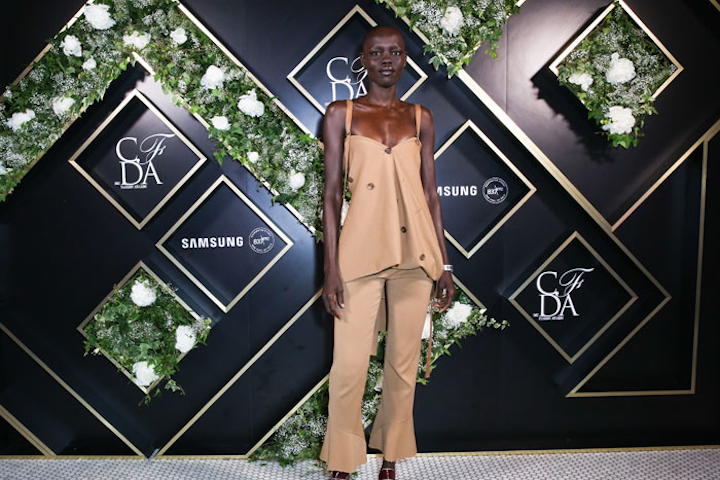 As a sponsor of the awards, Samsung hosted the official after-party at its Samsung 837 experiential space on Washington Street in the meatpacking district. The step-and-repeat at Samsung 837 featured a three-dimensional effect with sculptural pieces that incorporated oversize floral arrangements. This was followed by an after-after-party at Top of the Standard.
Photo: Sam Deitch/BFA.com 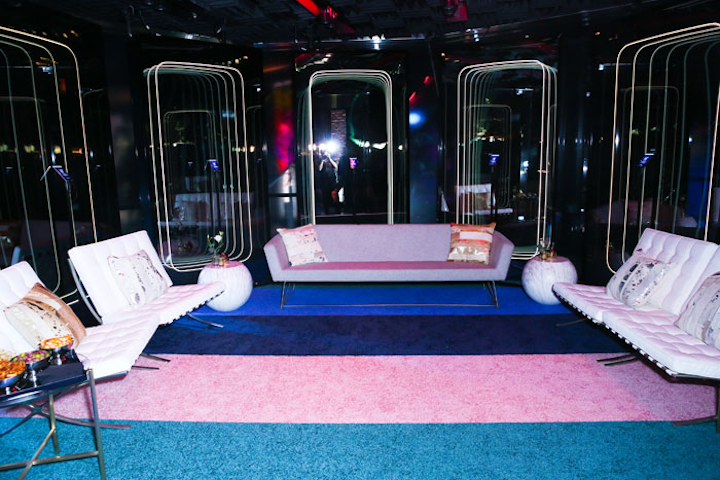 The colors that greeted guests at Hammerstein Ballroom for the awards were carried into the after-party at Samsung 837, which featured the same striped carpeting complemented by stark lounge furniture and decorative backdrops.
Photo: Sam Deitch/BFA.com
More in Event Production & Fabrication