See Edgy Activations and Stage Design From This Miami Festival

Following a tough edition in 2016 in the wake of Hurricane Matthew, organizers of the III Points Festival treated this year as a blank slate.

Celebrating its fifth anniversary, the III Points Music, Art & Technology Festival boasted an even bigger presence upon its return to the Wynwood Art District from October 13 to 15. A year after weathering the devastating effects of Hurricane Matthew, event organizers strongly bounced back with visually stunning audiovisual effects and edgy activations.

But rather than focus on the climate, festival co-founder Erica Freshman worked to design a new canvas at the event, held again at Mana Wynwood. “We push ourselves to think of the grounds as a clean slate,” she said. “We wanted to create a living installation for people to see the grounds with fresh eyes and a fresh mind.”

Freshman’s vision was evident throughout the weekend, thanks to several enhancements and additions that made III Points engaging for the 40,000 guests, representing a 15,000-person increase in attendance from 2016.

Outside of the festival grounds, more than 30 activations popped up at a dozen offsite properties. From a kickoff party at Soho Beach House and a closing party at the East hotel, to yoga on the terrace of Club Space and a Saturday pool party at Plymouth Hotel, III Points spanned both old and new venues from Wynwood to downtown, and from Brickell to Miami Beach.

Each evening, III Points transitioned to its home base at Mana Wynwood, which saw 12 hours of genre-spanning electronic, indie, and hip-hop music from more than 120 artists. Headliners included Gorillaz, the XX, Nicolas Jaar, Bonobo, and Kaytranada. “We did increase the budget, but it was what was needed to match the talent,” Freshman said.

Returning sponsors like Becks, Zignum Mezcal, and Red Bull provided brews, cocktails, and energy drinks for the masses, but the addition of several new brands made interacting between music sets enjoyable for attendees who perused the decorated grounds. Fireball Cinnamon Whisky ambassadors handed out rubber bracelets to redeem for free shots, promoting the spirit’s “Ignite the Nite” campaign. In addition, Stillhouse poured its American clear whiskey into themed cocktails at stationed bars.

When it came to swag, Toyota was the most popular tent. Promoting its new 2018 CH-R vehicle release, the “Once Upon a Drive”-theme promotion invited guests into the car’s makeshift photo booth to pose. Guests who submitted contact information into tablets received pink-and-orange scarves with both the CH-R and III Points logos, along with iPhone- and Android-compatible electronic fan attachments. And, in anticipation of Saturday’s rainfall, disposable poncho handouts were a useful amenity. Toyota also offered non-alcoholic beverages: a variety of punch-theme potions poured over dry ice. “The Toyota team was really collaborative and cool. They understood how to activate at a festival,” Freshman said.

Activities included a pop-up nail salon created by the III Points producers that invited guests to chat with one other or watch pornography on television.

The outdoor focal point of the event was the Mind Melt stage, which was outfitted with a 50-foot video wall, image screens, and an L-Acoustics sound system that accommodated well over 10,000 guests. A gleaming disco ball from Fort Lauderdale-based Everlast Productions hung from a construction crane and became the centerpiece of the outdoor arena, encouraging lighting designers to use the added effect after sunset.

The event also encompassed new multi-sensory, technological art experiences. On the far end of the space was “the Ship” by Brian Eno, presented by ICA and III Points, which invited guests into a dimly-lit room where more than 20 speakers were scattered on the walls to create an atmospheric audio escape. Guests took to the refuge for relaxation, yoga, and meditation.

Also inside the warehouse was the Dither stage, curated by Tara Long and designed by Andrew Byrd, which featured cameos by local artists. The unconventional platform was situated between two sets of doors and focused on expression and programming. A booth offered passersby an intimate look at in-studio performing, while a smaller, live setup offered a front-row performance view. Jolt Radio live streamed the audio activation.

On the west end of the warehouse, visual works were spread throughout the space. Videoscope by Miguel Prypchan, Nonotax Studio’s Daydream V.4, and Metropolis by returning artist Jason Boogie included projections in different colors and dimensions. “We wanted to play off the vastness of the space with large light installations, to allow people to get lost,” Freshman said.

Director of production Ross LaBrie expanded his behind-the-scenes operation for smooth execution at the five-stage event. “The fine details are important to us,” he said. “We want the experience for the attendee to be dynamic on many levels, while maintaining the highest level of technical production at all times.”

LaBrie tapped several production companies to assist, including two-year partner Unreal-Systems, which oversaw the sourcing of all staging, lighting, video, and technical personnel, among other duties, LaBrie said.

Freshman confirmed that III Points will return in 2018 for a sixth edition. 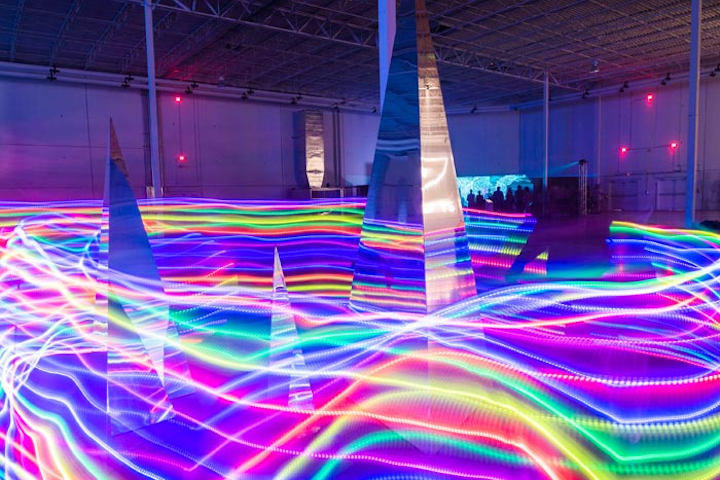 An LED hula hooper lent a spectrum of light to the reflective III Points sculpture by Dalva.
Photo: Skyler Greene 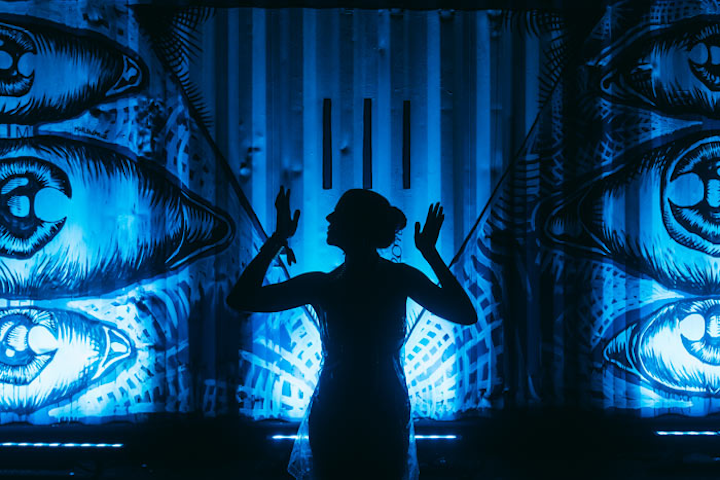 An attendee appeared in silhouette in front a shipping container onto which the III Points logo—an upside-down triangle—was painted alongside a mural bathed in blue light. The logo represented the three points of the festival: music, art, and technology. Shipping containers were used during the event as decor, and doubled as trailers.
Photo: Adinayev 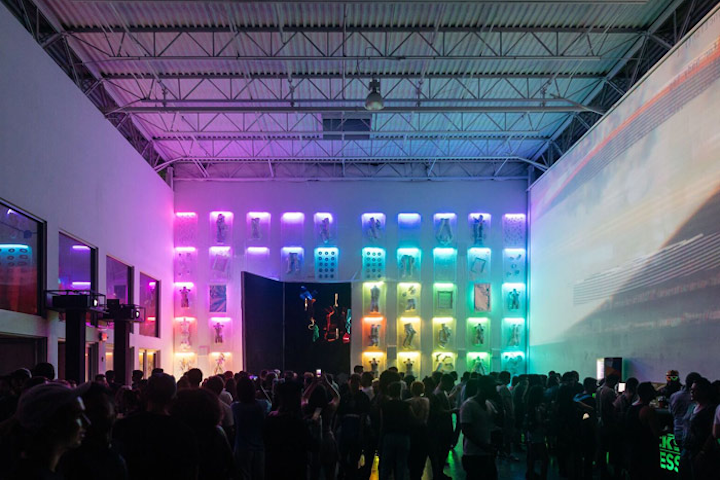 Longtime III Points curator Haiiileen constructed a wall of compartments featuring mannequin parts in standout neon lights at the entrance of the Main Frame stage, which became a popular backdrop for selfies and photos.
Photo: Adinayev 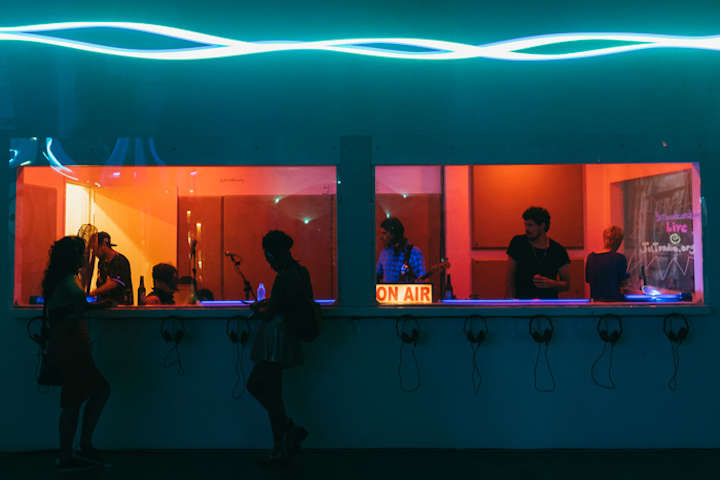 A new stage, called Dither, was introduced by III Points organizers for the fifth edition of the festival. Created as a booth, it allowed passersby to watch, and listen in, as if they were in a recording studio.
Photo: Adinayev

A popular returning pit stop was the pop-up nail salon inside of a van. Created by the III Points producers, the venue invited guests to chat with one other or watch pornography on television.
Photo: Adinayev 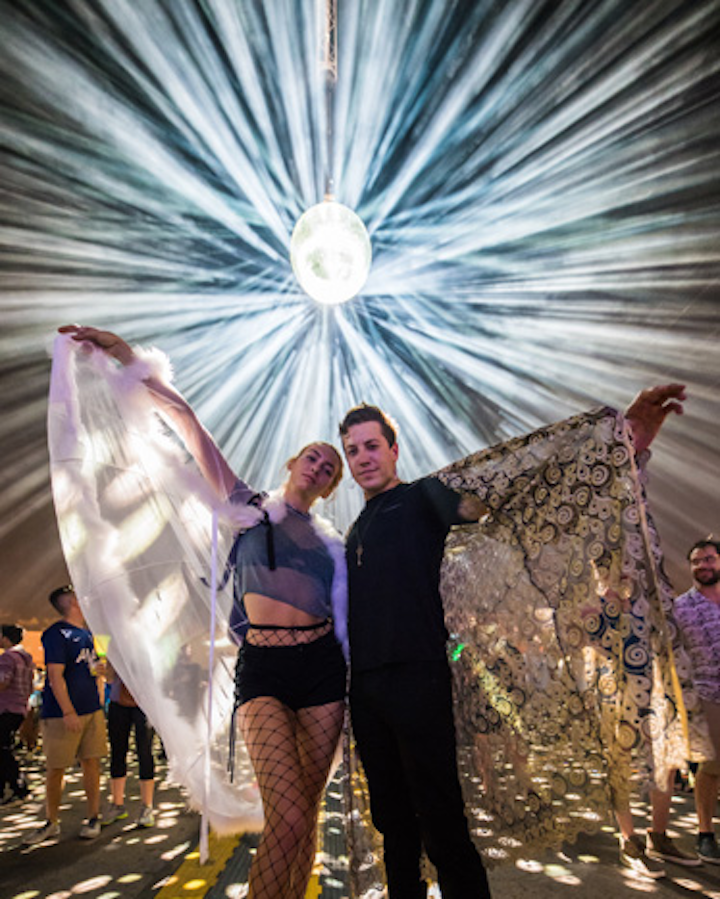 A disco ball was provided by Everlast Productions and dangled from a crane over the Mind Melt stage throughout the weekend. Functioning as a work of art, the centerpiece was a prime spot for photo ops, and was incorporated into the performances of some artists. 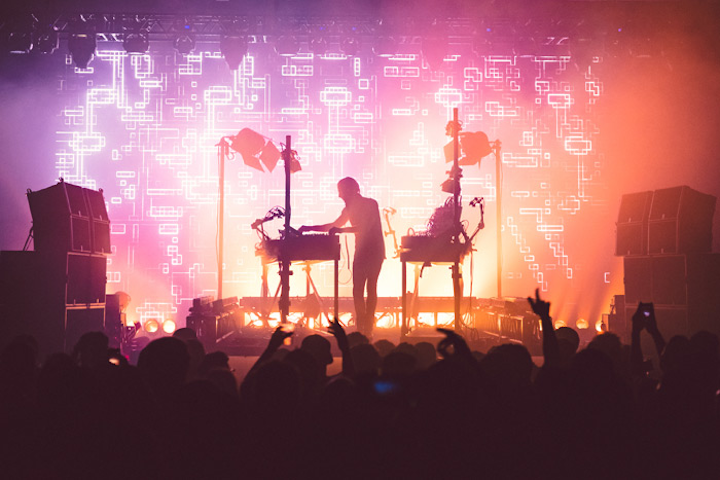 House music DJ Richie Hawtin closed out the first night with a late-night showcase of a new, 75-minute audiovisual show, entitled Close – Spontaneity & Synchronicity. His equipment structure included a rig of cameras, which captured his production in real time, and then projected the images onto the screen behind him for use as visuals.
Photo: Adinayev 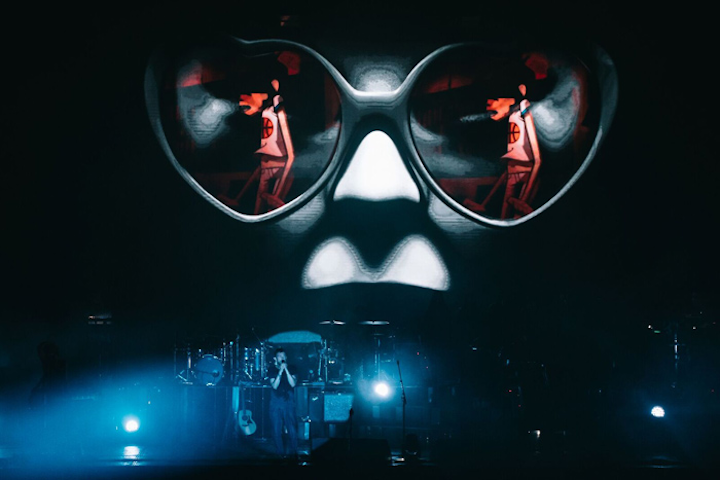 Gorillaz made its Florida debut on Friday night as the festival headliner. Featured animation of the band’s main characters were projected from the stage throughout the set, which included clips from hit songs, as well as new material from the band’s latest album, Humanz.
Photo: Adinayev 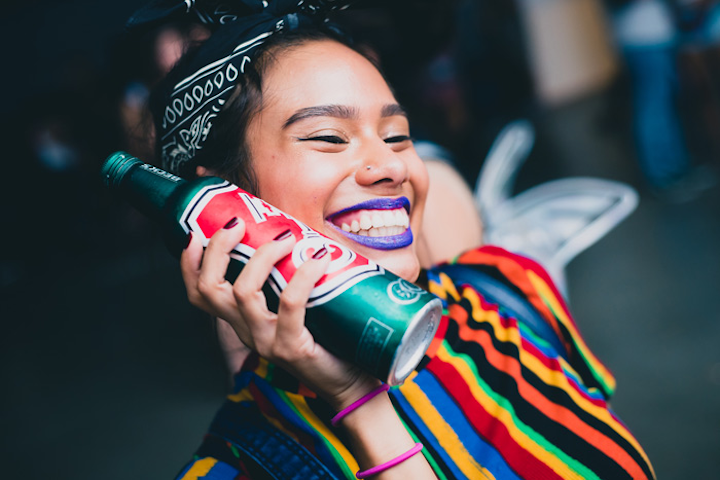 Beck's Brewery returned to III Points as the exclusive beer sponsor to serve up cans and bottles of its signature hops.
Photo: Adinayev 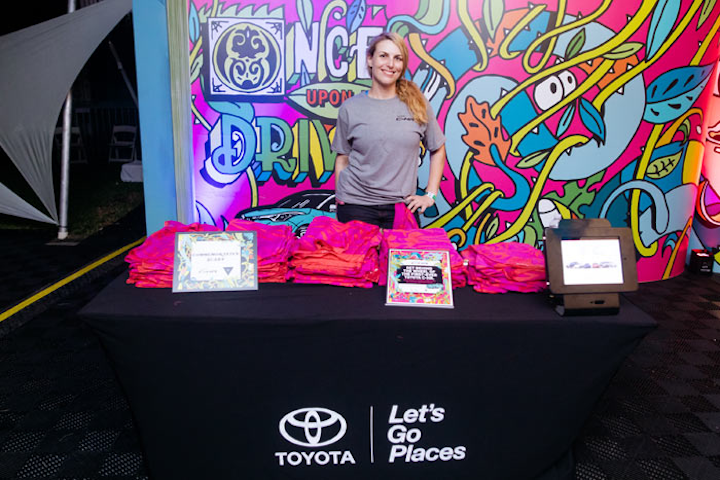 Toyota partnered with III Points for an interactive activation. In exchange for personal data, attendees received vibrantly colored scarves with imprinted with the logos of the new CH-R model vehicles and III Points, iPhone- and Android-compatible portable, electronic fans, and ponchos.
Photo: Adinayev 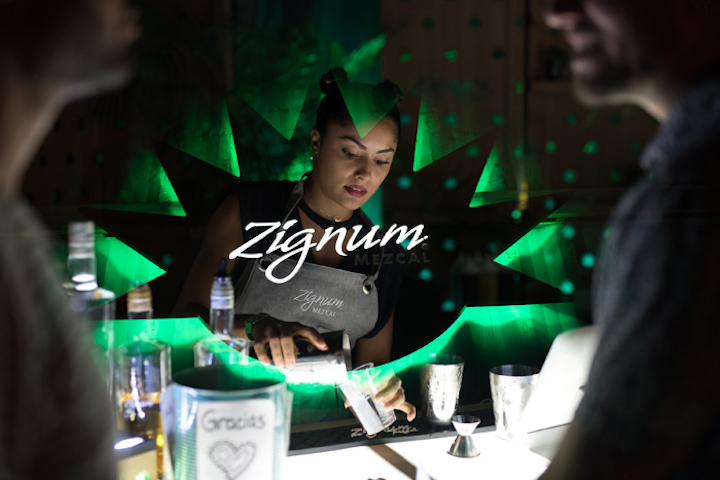 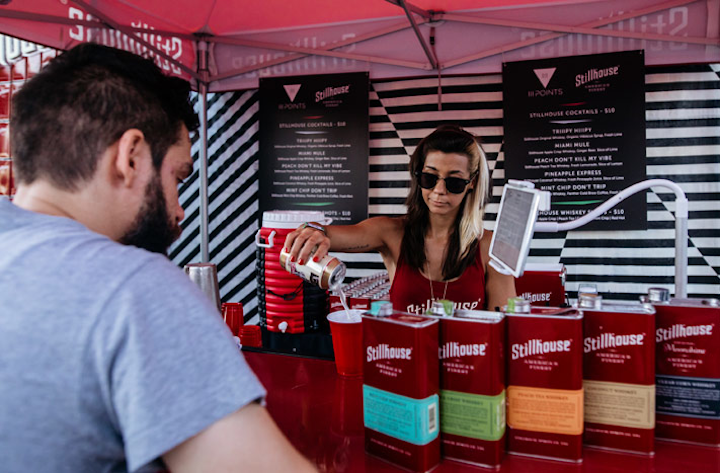 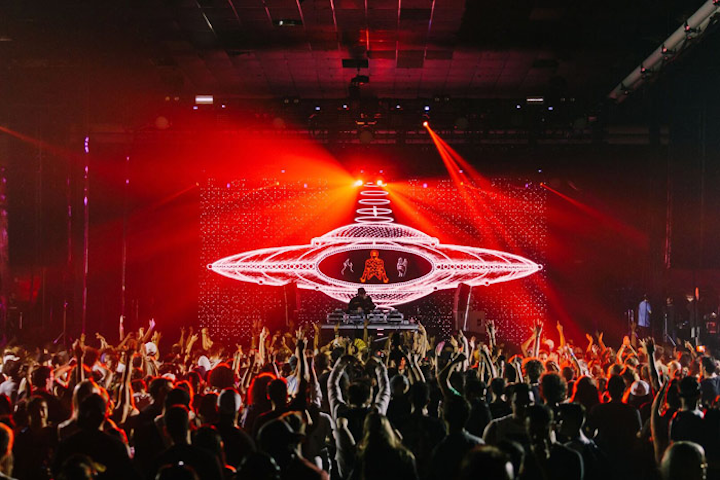 In keeping with Miami's status as a mecca for heavy bass music, Barclay Crenshaw delivered a set dressed in red-hued visuals at the indoor Main Frame stage. The artist and founder of Dirtybird Records is better known as Claude VonStroke.
Photo: Adinayev 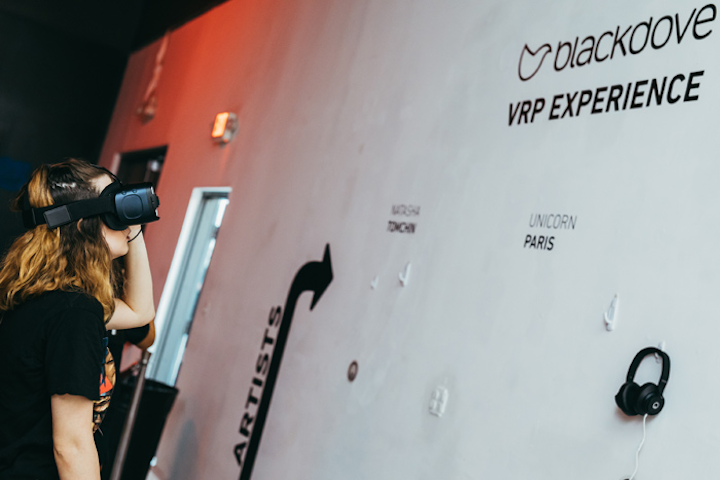 Making a statement on the "absurdity of V.I.P. culture," said Freshman, the Blackdove VRP Experience virtual-reality installation offered attendees the chance to relax in virtual destinations via digital museums that show images which move. The artists were Girls Unaware, Muvtek, and Natasha Tomchin.
Photo: Adinayev
More in Event Production & Fabrication