The eighth edition of the international business conference revolved around the theme of "Tomorrow," which was manifested through a new venue, new and reworked teambuilding and networking activities, and reconstructed stage setups. 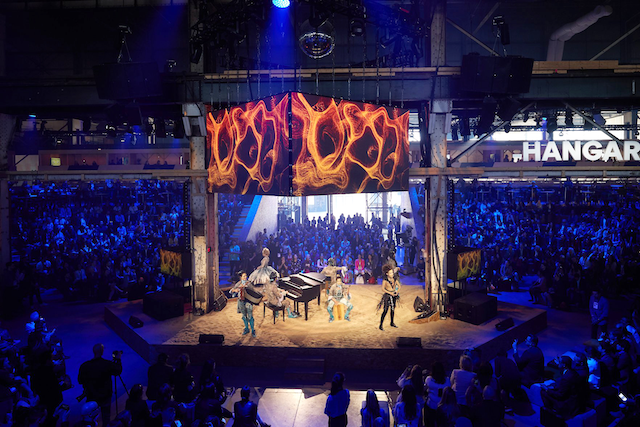 The Agora space provided one of the main stages for speakers and performances, including an opening night show by Cirque du Soleil. The hexagonal, 360-degree stage was covered in sand, which C2 president Richard St-Pierre said was a nod to the conference's commitment to sustainability. Efforts to reduce the conference's carbon footprint included providing recyclable attendee badges, banning straws and single-use water bottles on site, and reducing the proportion of fossil fuel-powered machines used in the buildout to below 40 percent. Another section of the space also held the "Braindate Lounge," where attendees had one-on-one conversations on specific topics.Photo: Courtesy of C2 Montreal

MONTREAL—C2 Montréal is in a state of reinvention. For the eighth edition of the international business conference, this was most apparent with the introduction of a completely new venue. C2 was held at Grandé Studios, a 200,000-square-foot studio space in the Point-Sainte-Charles neighborhood, located on the grounds of the former Grand Trunk Railway yards, which was once Canada’s largest train repair shop.

The conference's new home provided double the space of its former location at the Arsenal and featured 60-foot ceilings, an abundance of natural light, and a variety of different layouts for three speaker stages and multiple brainstorming and networking experiences. The new venue also set the tone for the conference's 2019 theme of “Tomorrow."

While “Tomorrow” could be interpreted in countless ways, C2 chief creative officer Genifere Legrand said the idea was to have the theme serve as a call to action, stressing the fact that “tomorrow is right now”—and that people can make an impact on the future by taking action today.

“[‘Tomorrow’] really guided us in building this year’s program,” said Legrand. “We invited a lot of speakers to talk about how we can make our society better, especially regarding the environmental challenges we’re facing and the technology issues we might face.”

For off stage experiences, the new venue provided an opportunity for the conference to deliver new and reinterpreted labs—the conference’s signature brainstorming environments—as well as reworked networking areas and creative, Instagram-worthy meeting spaces.

“The size of the venue influenced the way we built the program,” said Legrand. “But we always play with the same elements that are part of C2’s DNA. It’s all interlinked.”

The site plan allowed for Legrand and her team to plan for one main stage (Forum-Solotech), a smaller, more intimate stage (Cabaret-Quebec), and a stage that also doubled as a public space for connection, called the Agora. The Agora not only held talks and performances, but provided a more open environment for attendees to have “braindates," the networking platform created by technology company E180. As with last year's conference, attendees could schedule these one-on-one conversations on the conference’s Klik registration platform or at the event.

Grandé Studios also allowed for attendees to experience the C2 Village, the conference’s outdoor plaza, as soon as they entered. The casual atmosphere offered everything from notebook-making and local food trucks to a pop-up Nespresso café and goat yoga. The plaza also featured the returning Cabana bar, serving as a central point for attendees looking to mix and mingle.

One of the conference’s most outlandish moments, however, came from the venue's ceiling. To pay homage to the venue’s history, the conference tapped a group of aerial artists to spontaneously appear, wearing 19th-century industrial costumes, and perform acrobatics and music from above. Legrand said the idea was for the artists to represent spirits who lived in the venue. And it's an idea that encapsulates how C2 Montréal continues to offer a conference like no other.

C2, which stands for commerce and creativity, was launched by creative agency Sid Lee in collaboration with founding partner Cirque du Soleil. The ninth edition of the conference is slated to take place May 27 to 29, 2020.

Here’s a look at some of the creative highlights from this year’s conference. 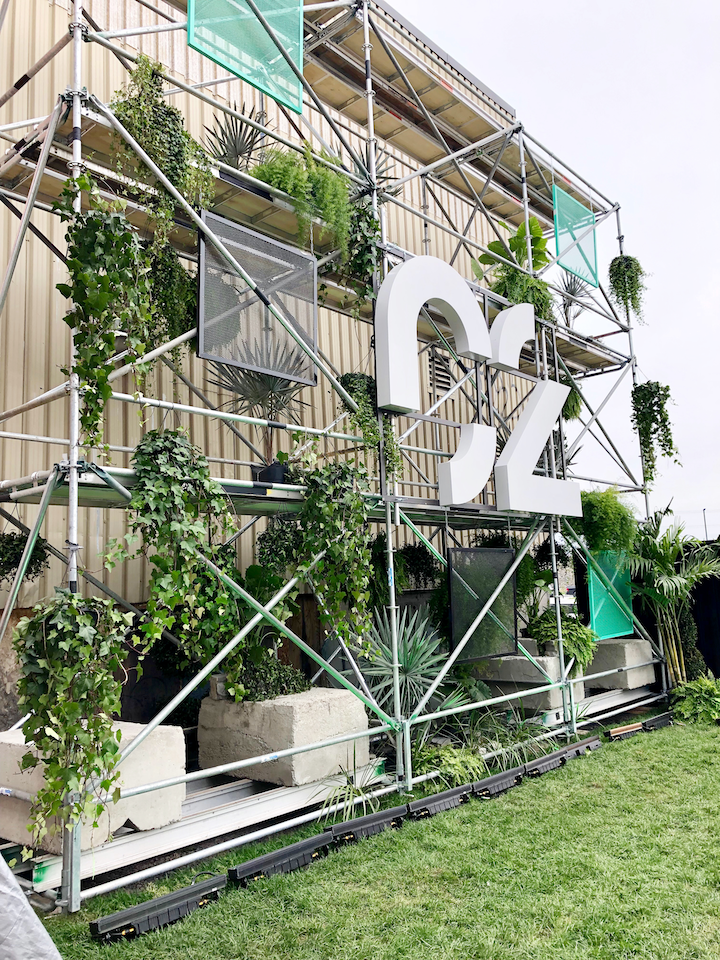 The eighth edition of C2 Montréal took place May 22 to 24 at Grandé Studios. The venue’s outdoor space, the C2 Village, is where guests checked in and out. The space featured a massive welcome wall with the conference logo, surrounded by industrial elements and greenery.
Photo: Ian Zelaya/BizBash 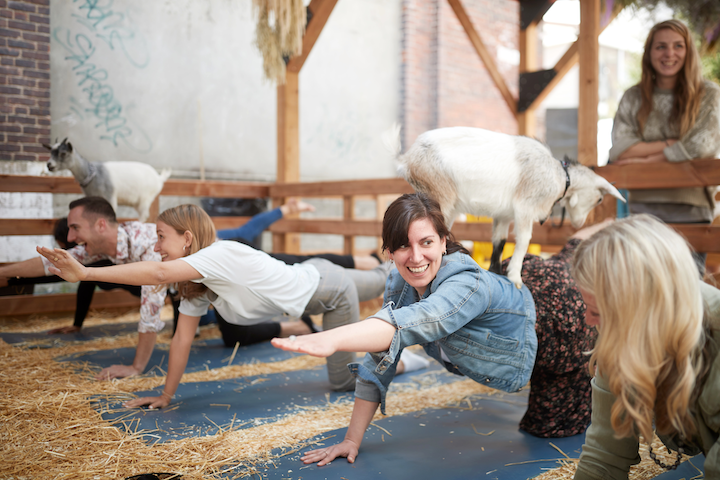 One of the first C2 Village experiences guests encountered was goat yoga, which was held at the Community Garden by Facebook. Along with yoga sessions, guests could also use the space to relax and pet (or take selfies with) goats.
Photo: Jimmy Hamelin 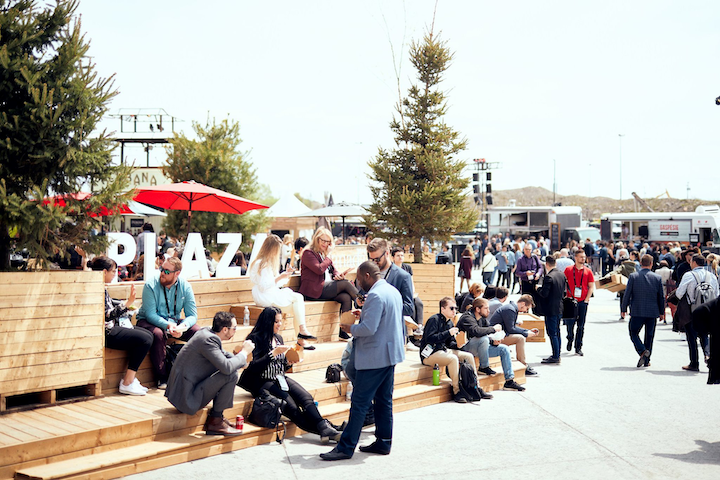 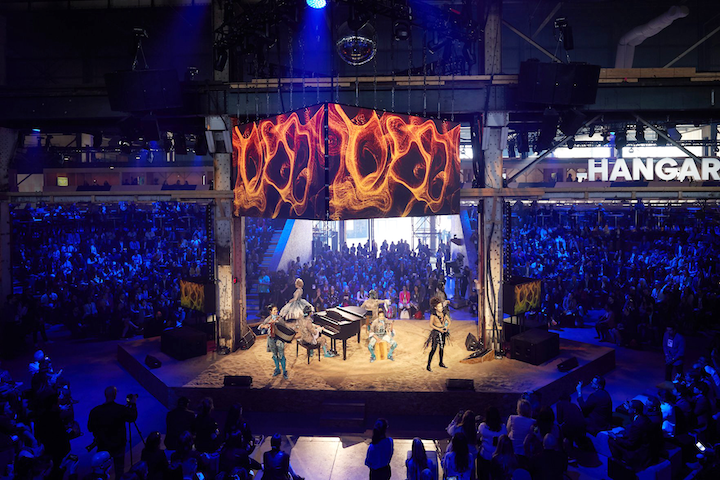 The Agora space provided one of the main stages for speakers and performances, including an opening night show by Cirque du Soleil. The hexagonal, 360-degree stage was covered in sand, which C2 president Richard St-Pierre said was a nod to the conference's commitment to sustainability. Efforts to reduce the conference's carbon footprint included providing recyclable attendee badges, banning straws and single-use water bottles on site, and reducing the proportion of fossil fuel-powered machines used in the buildout to below 40 percent. Another section of the space also held the "Braindate Lounge," where attendees had one-on-one conversations on specific topics.
Photo: Courtesy of C2 Montreal 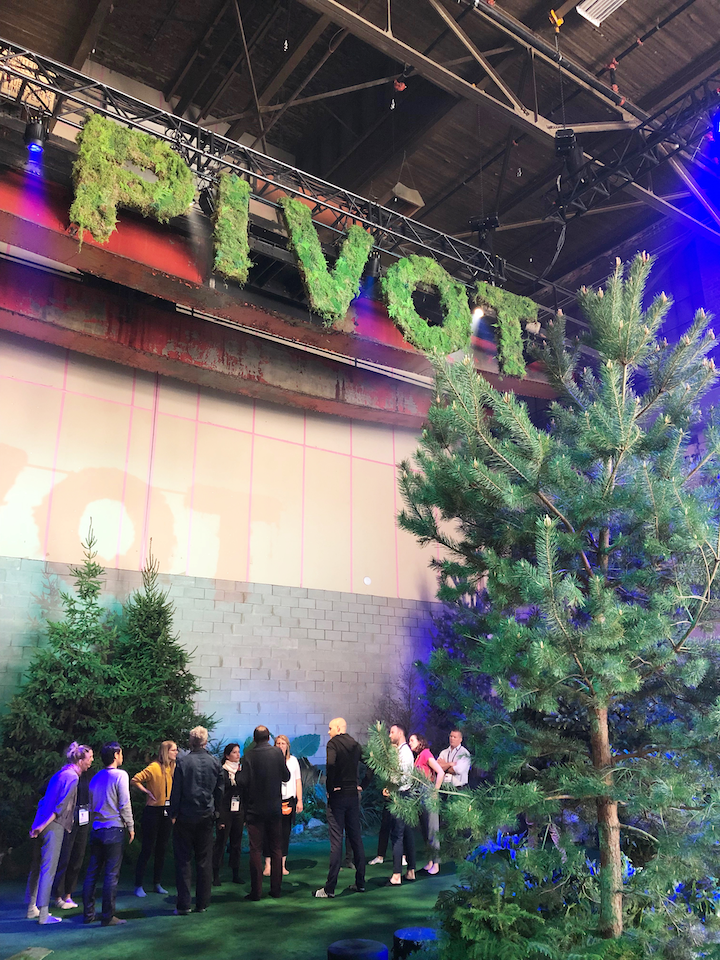 One of six conference labs was Pivot, which invited attendees to learn about body mechanics and how understanding them can deepen trust in teams. Participants worked with professional dancers for the lab, held in a forest-theme environment with real trees.
Photo: Ian Zelaya/BizBash 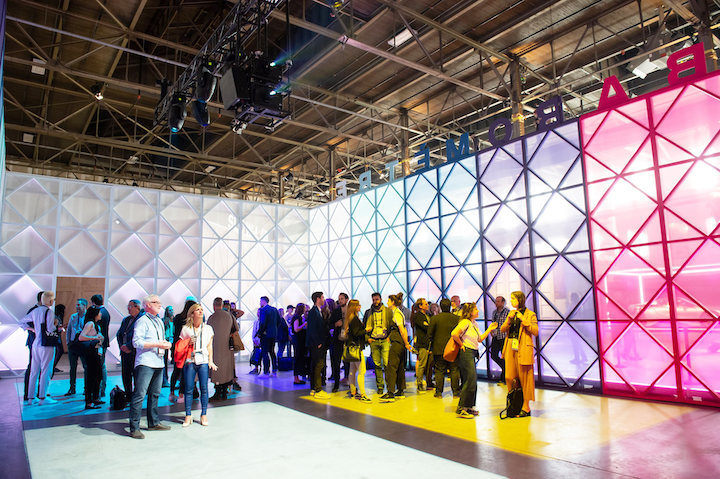 Inspired by a lab from last year, the Barometer lab invited attendees to literally take a stand on business, social, and cultural issues by discussing topics on a screen that corresponded to the color block where they stood.
Photo: Agnieszka Stalkoper 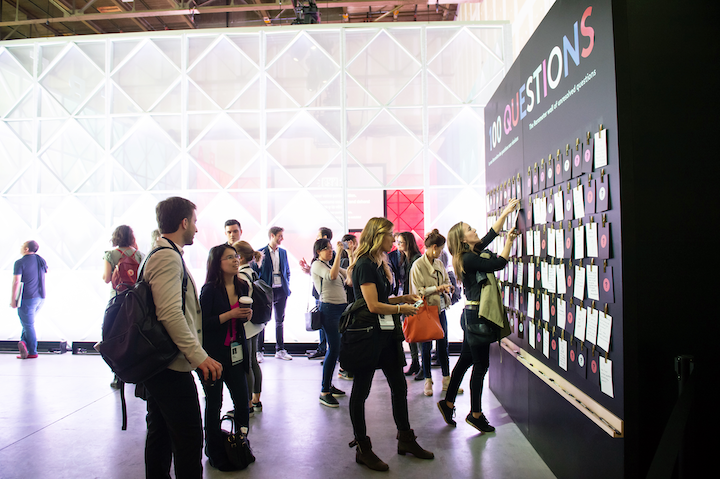 For unresolved questions at the Barometer lab, guests could write down thoughts and additional questions on an adjacent wall.
Photo: Agnieszka Stalkoper 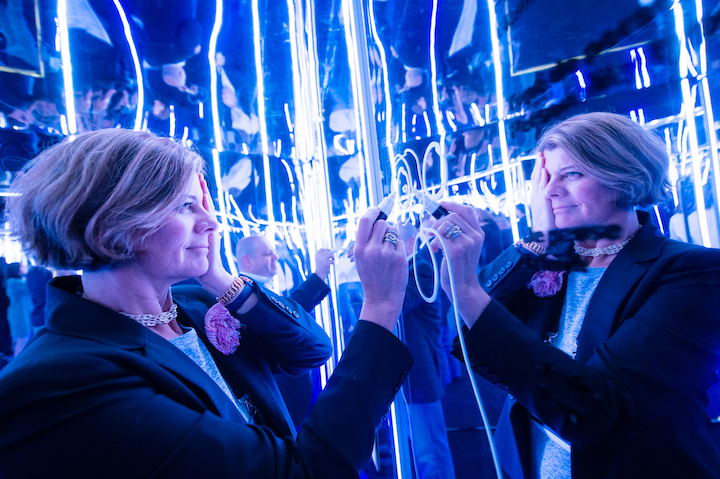 The Alter Ego lab asked attendees to break away from how they perceive themselves, with the goal of making bolder decisions. The three-step experience was held in a mirrored, infinity-style space. Attendees were invited to connect with their alternate persona; develop the character’s identity by drawing on the mirror; and finally, embody their new alter ego.
Photo: Agnieszka Stalkoper 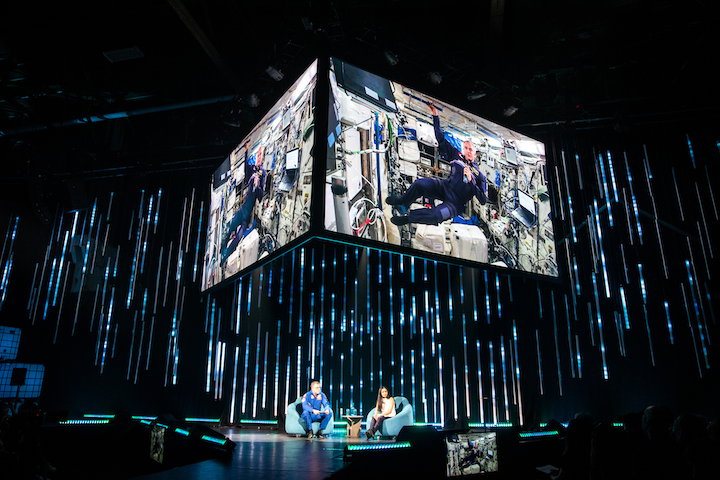 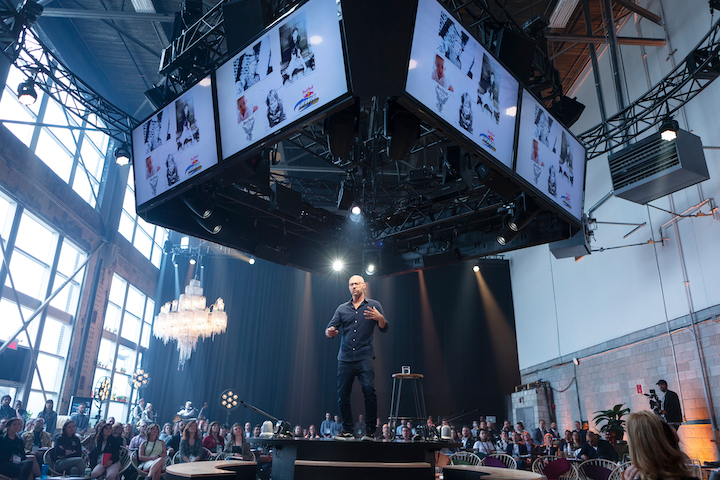 The Cabaret-Quebec space gave attendees a new C2 environment to interact with speakers. The space mixed cabaret-theme candelabras, seating, and other decor to contrast with a high-tech, 360-degree stage. The circular stage was designed to cater to multiple speakers participating in post-talk Q-and-As, in which they could separately take audience questions at the same time.
Photo: Allen McEachern 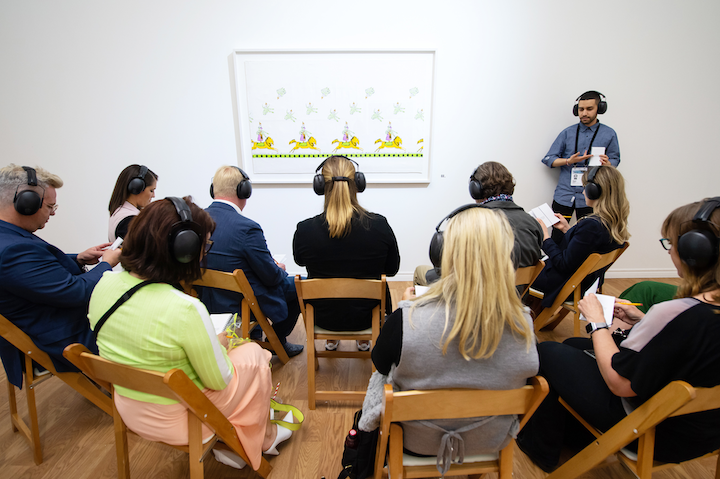 The Slow Lab focused on the practice of observation without distractions, with the goal of finding new ways to learn and think critically. Groups of 30 attendees entered a white room isolated from sound, Wi-Fi, and other distractions. They were asked to observe a piece of art in silence without engaging with their neighbors, and follow a series of "slow-looking" exercises. The lab ended with a discussion on how these exercises can help business leaders focus and navigate complex situations. Artwork included an Andy Warhol piece from the private collection of Paul Maréchal.
Photo: Agnieszka Stalkoper. Artwork courtesy of the Andy Warhol Foundation for the Visual Arts, Inc. / Licensed by SOCAN 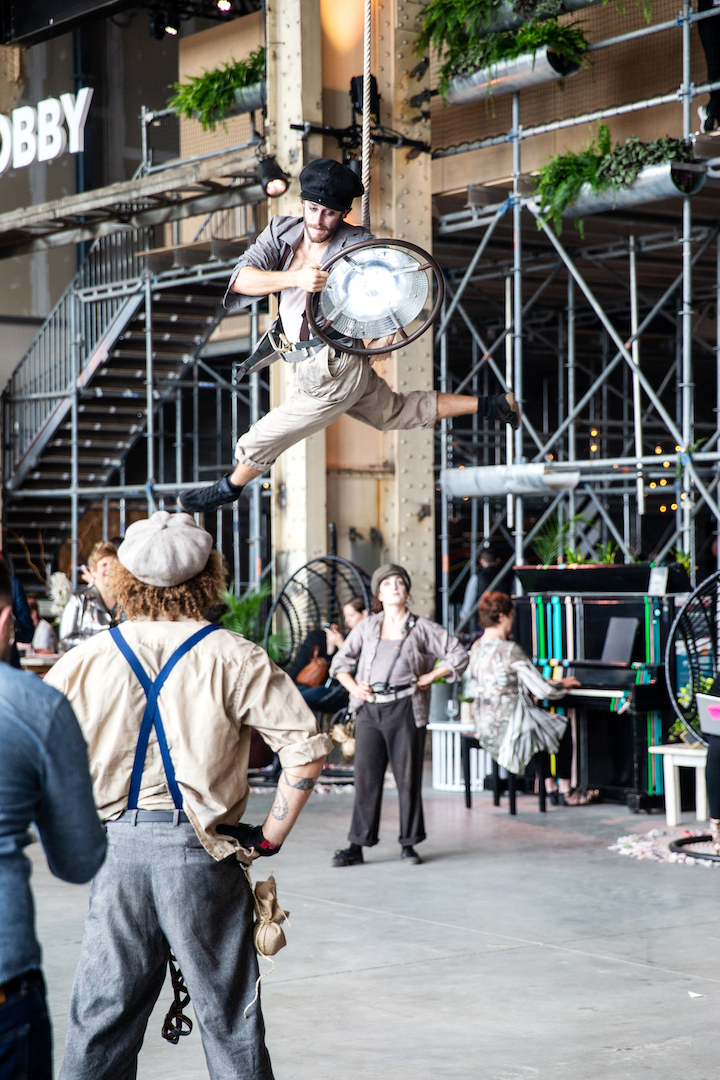 Montréal is known as a city of arts and creativity, and this was exemplified with a group of roving acrobats that “inhabited” the three-day conference. Performance troupe the Spirits appeared from the ceiling throughout the event, dressed in 19th-century industrial attire that paid homage to Grandé Studios’ history. The venue is located on the grounds of the former Grand Trunk Railway yards and shops, which opened in the mid-1850s and was once home to the largest train repair shop in Canada.
Photo: Arianne Bergeron 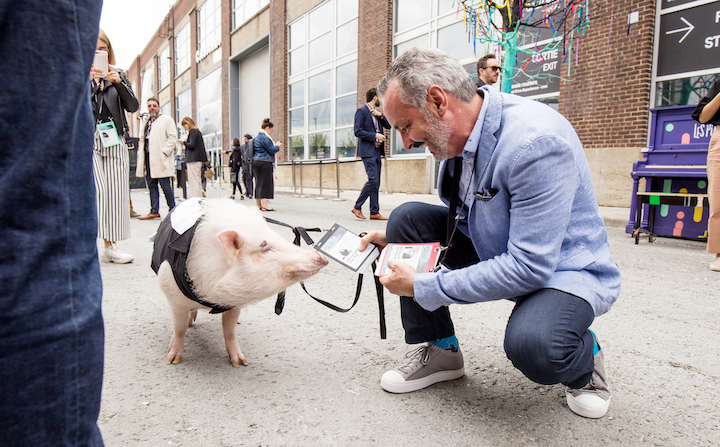 One of the high-profile conference attendees was Christopher the Pig, an Instagram influencer with more than 83,000 followers. The pig had his own Klik attendee badge, and here posed (and exchanged information) with C2 president Richard St-Pierre.
Photo: Mathieu Dunberry 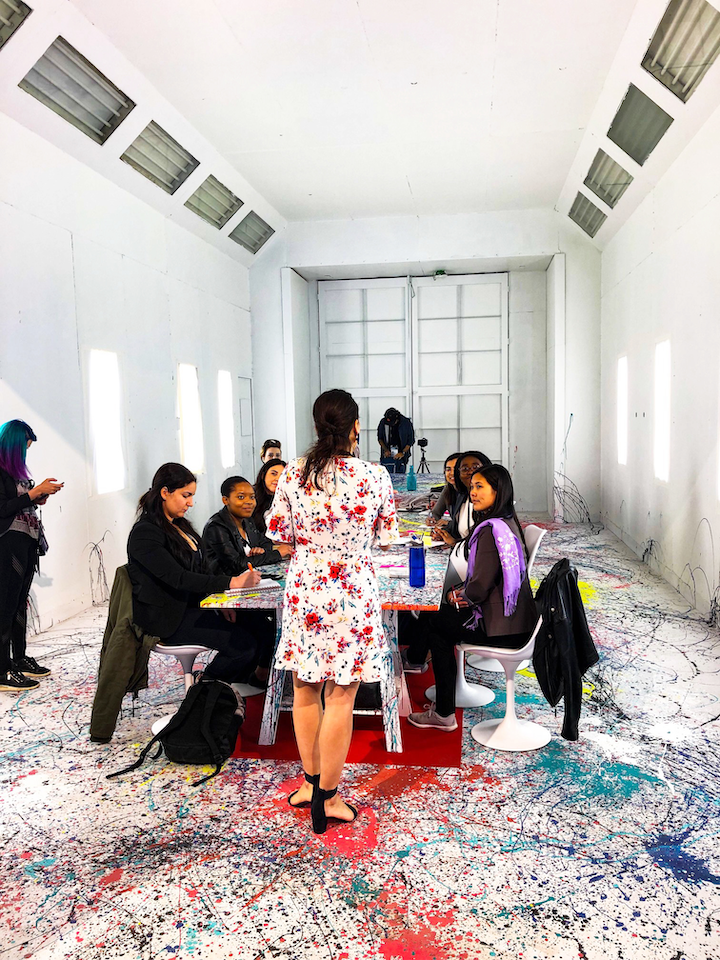 Once again, the conference provided a variety of eclectic meeting spaces for attendees, including a garage-like white conference space splattered in paint.
Photo: Courtesy of C2 Montreal 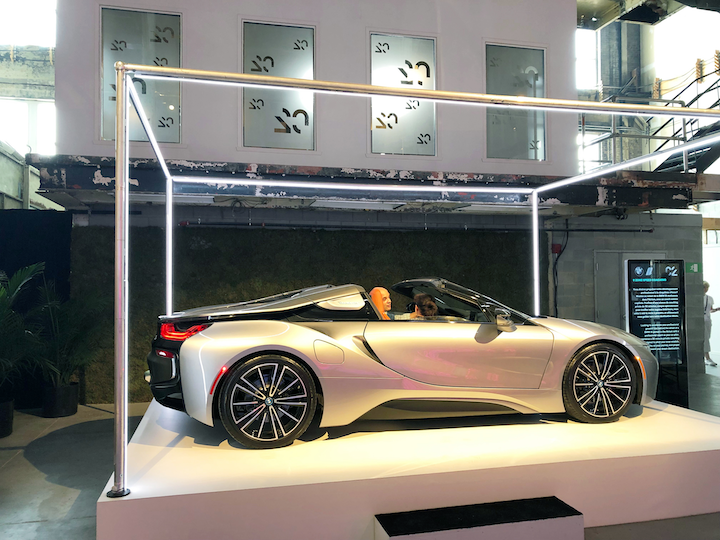 Guests could participate in speed-coaching sessions, held in a BMW i8 vehicle. Behind the wheel, guests had conversations with professional coaches who gave guidance and advice related to career journeys.
Photo: Ian Zelaya/BizBash 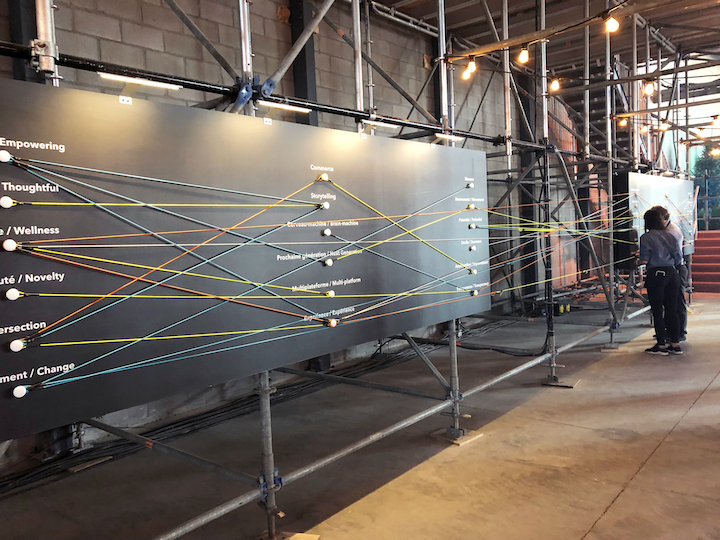