TIFF 2016 Preview: The Most Anticipated Festival Events and Activations

The 41st edition of the Toronto International Film Festival will include numerous gifting lounges, brand activations, and restaurant pop-ups. 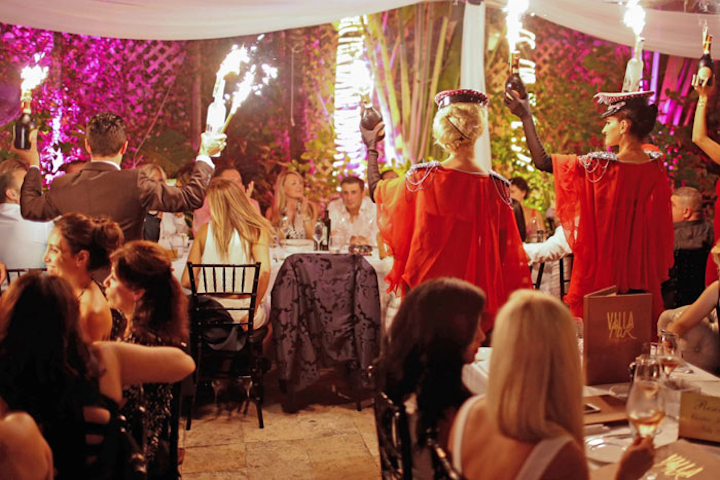 Villa Azur, a Miami-based restaurant and lounge inspired by the French Riviera, will host its inaugural pop-up lounge at the Spoke Club. Events will include lavish dinner parties and a brunch inspired by the South of France.
Photo: Courtesy of Villa Azur

The 41st edition of the Toronto International Film Festival will take over the entire city from September 8 to 18, enticing big brands, publicists, and event organizers to take part in the glitzy 10-day fest. With numerous actors, producers, and directors flying into town throughout the festival, the red carpet is being rolled out and activations and events are kicking into high gear. Here are some of the noteworthy events that will be taking place during TIFF this year.

The Can't-Miss Parties
At the TIFF Bell Lightbox tonight, the TIFF Opening Night Soiree will welcome the guest of honor, actor Michael Fassbender, alongside about 550 donors. Inside the cinema, an exclusive onstage conversation with Fassbender will take place prior to a V.I.P. gathering on the rooftop of Malaparte.

For its second season, Mongrel Media will be returning to the festival party circuit with its event series Mongrel House from Thursday through September 14. Esther Garnick PR is assisting with publicity for the event, which is again taking place at the Campbell House museum. Nightly programming includes live music presented by Cineplex, a nightly food market presented by the St. Lawrence Market, and a throwback to East Coast-inspired kitchen parties, including live karaoke presented by Alexander Keith’s.

Known in the industry as one of the biggest TIFF kick-off parties, the sixth annual Producer’s Ball Presented by Fandango, which takes place Friday, will once again be hosted by tag-team brother duo Drew and Jonathan Scott of Property Brothers. The intimate affair brings together directors, producers, and actors while educating guests on the role of producers in film. The ball will take place at 128 Peter Street, a pop-location in Toronto’s downtown core.

Bovet 1822 Artists for Peace and Justice 2016 Festival Fair, a charitable event that raises funds each year for initiatives in Haiti, sets out for its eighth TIFF installment on Sunday at Casa Loma. Co-hosts this year include Jeremy Renner, Maxwell, Paul Haggis, Maria Bello, Catherine Keener, and Jim Belushi. The board will be honoring Sean Penn for his dedicated support of the organization’s work in Haiti.

Entering into its seventh year at TIFF, the Festival Music House at Velvet Underground on Monday will showcase some of Canada's diverse musical talent to the taste-makers of the film and television industry. Live acts of the evening include Dragonette, Jessy Lanza, Charlotte Day Wilson, and a DJ set from Kardinal Offishall.

For the fourth year of Birks Diamond Tribute to the Year’s Women in Film, Telefilm Canada and Birks have partnered to showcase and celebrate the women in the Canadian film and television who are bringing international acclaim to the industry. The invite-only event will be honoring 12 Canadian women on Monday at the Shangri-La Hotel.

Lounges Where the Stars Are Hanging Out
For the eighth year, Bask-It-Style's lounge presented by GLO Communications at the Thompson Toronto offers a more personalized take on gifting. While guests will be taken through activations by lounge sponsors that include Birkenstock, Finn, Josef Seibel, Cloud and Gerry Weber, L’Oréal Canada, Mary Kay, and Maple Leaf Tavern. Personalized V.I.P. gift bags will be hand-delivered to the stars during their stay throughout TIFF.

Esther Garnick PR will also host the ever-popular Essentials Lounge for the seventh year tonight at the Richmond. The lounge exclusively invites members of the media to come in and pamper themselves before the festival's onslaught. E.G.P.R. president Esther Garnick explains, “It occurred to me that media working around the clock at TIFF—reporting on all its glamour—are living the exact opposite of reality.” The lounge will feature products and sponsor activations from Colmar Originals, Glacéau VitaminWater, KMS California, Saucony, and Smashbox Cosmetics.

NKPR and the Property Brothers duo's activation at 128 Peter Street runs today through Sunday. Including daytime and nighttime programming, invited guests can have their portrait taken with photographer Caitlin Cronenberg in the IT Lounge Portrait Studio in Partnership with W magazine. Artist Peter Tunney will be onsite creating live art to be auctioned off, with 50 percent of proceeds from sales going back to the nonprofit Artists for Peace and Justice.

Entering into its 11th year, the Tastemakers Lounge, presented by Krispy Kreme Canada, will be held Thursday to Tuesday at the InterContinental Toronto Centre. "It's a way to say congratulations to all involved, and create a unique opportunity for the brands involved," says Debra Goldblatt-Sadowski, president and founder of Rock-It Promotions and the Tastemakers lounge. This year, returning premium sponsor Sorel will host an on-site boot shop. Other activations include Tweezerman's brow-and-makeup bar and Salon Dew's hair touch-ups.

At the Deadline Hollywood Studio, stars are being treated to aesthetics treatments from Esthetics Plus at the Trump Hotel from Thursday to Monday. Guests can experience pampering that includes relaxing facials, eyelash treatments, and spray tans.

Sharp magazine has set up a lounge in the heart of the festival hub (located at King Street West and Blue Jays Way) for all to drop in. The lounge—which has a Harley-Davidson motorcycle simulation, a virtual-reality exhibit, a Volvo super car, and some Chopard diamonds—aims to capture what it’s like to relax like a celebrity in style.

Brassaii Bistro Lounge will be hosting the Hollywood Reporter Lounge from Friday to Tuesday for celebrities to escape the festival and enjoy the King West hotspot's new brunch menu.

Notable Parties, Panels, and Pop-Ups
French Riviera-inspired Villa Azur, a restaurant and lounge based in Miami, will host its inaugural pop-up activation and lounge at the Spoke Club from Thursday to Sunday. Events include an "All White Affair" dinner party on Thursday, and a South-of-France-theme champagne brunch, hosted by Toufik Sarwa, on Sunday.

On Tuesday at Hot Docs Ted Rogers Cinema, the Axe Collective and Vanguard Honours event will bring together Mark Duplass and John Legend alongside TIFF Vanguard programmer Colin Geddes to host an evening that celebrates the festival's Vanguard films and spotlights three aspiring filmmakers. No advance tickets are available, and the event is open to the public.

For the third consecutive year, Festival Street returns to TIFF on King Street West between Peter and University streets. From Thursday to Sunday, there will be several family activities, live performances, and art installations. One of the event's highlights will be Pharrell Williams and special guests performing new music from the film Hidden Figures for select TIFF members on Saturday.

On September 14, Neal Fraser of Top Chef: Masters will bring his sought-after Hollywood hot dogs to TIFF partygoers at the Fritzi Dog pop-up at the Drake Hotel. The eatery will offer gourmet, sustainable hot dogs, as well as vegetarian options including a sous-vide carrot dog.