When it comes to event marketing, USA Network doesn't consider itself a conventional entertainment entity, preferring to build promotions around the quirky "Characters Welcome" tagline. That's the approach that informed the silent flash mob of female spies for Covert Affairs in 2010 and last year's picnic-style summer screenings, and was carried through to the television brand's latest public-facing effort. To mark the return of its legal-drama series Suits, which premieres tonight, the network partnered with online menswear retailer Mr. Porter to launch a multiplatform initiative that included a fashion show, microsite, iTunes app, pop-up shop, and coast-to-coast publicity stunt.

Overseen by Alexandra Shapiro, USA's executive vice president of marketing and digital, and designed and produced by XA, the Experiential Agency, the collaboration and its events and promotions was designed to align the style and the aesthetic of show with that of the shopping Web site. "The Mr. Porter alliance allows us to bring the Suits world to life and directly involve our consumers globally in a uniquely innovative, sophisticated, and immersive way," Shapiro said in a press release. "Mr. Porter's taste, sensibility, and editorial voice is perfectly aligned with the Suits franchise."

The promotional campaign started with the digital side, launching the app and a dedicated section of mrporter.com with original photography, behind-the-scenes footage of Suits season two, and a curated collection of clothing based on the show's two central characters the first week of June. This was followed by the June 9 opening of the pop-up shop, an experiential space in the meatpacking district. Dominated by a masculine color palette of white, black, and gold, the venue had a residential feel, with products displayed on bookcases beside oversize table lamps, on dining tables, and near framed black-and-white portraits of the show's cast.

Driving traffic to the store was a troop of models, men dressed in matching gray suits who pedaled around the city on white branded bicycles. The publicity stunt also hit Los Angeles, Chicago, and San Francisco, where the men distributed copies of Mr. Porter Post, the 20-page special edition publication produced by the online retailer.

The final piece in the puzzle was the runway presentation on the High Line, a feat that involved the use of a 60-foot-long LED video wall display, full bars, and, due to the rain, a fleet of male models covering arriving and departing guests with umbrellas. 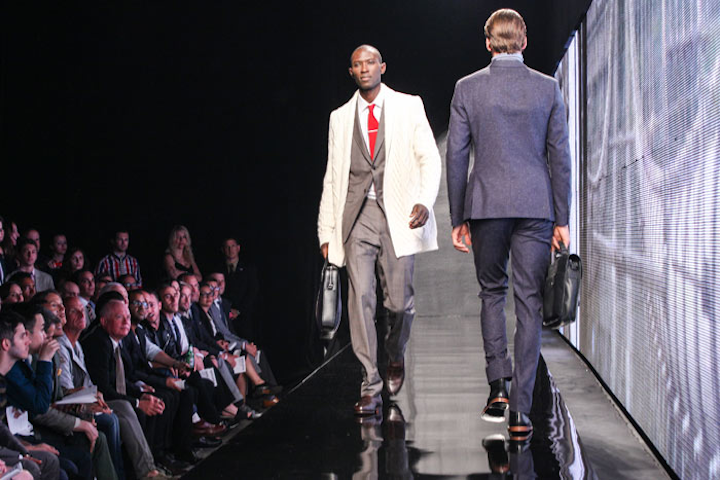 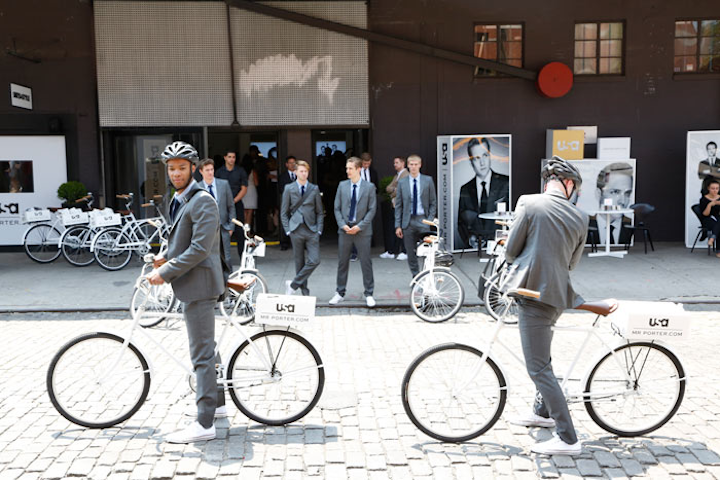 To draw attention to its pop-up shop in the meatpacking district, USA Network dressed male models in identical suits and sent them around the city on matching bicycles. The television brand also dispatched men on bikes in other cities, spreading word in Chicago, San Francisco, and Los Angeles of the upcoming premiere of Suits season two.
Photo: Heidi Gutman/USA Network 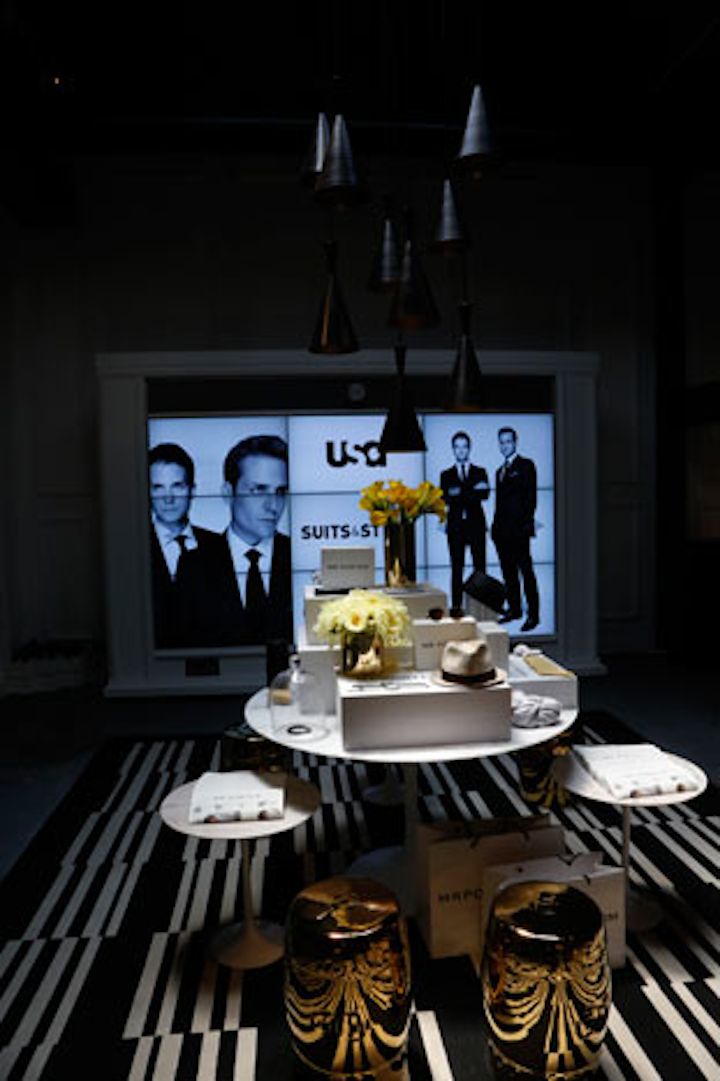 Inside the temporary store, which runs through Sunday, producer XA crafted a residential look. A color palette of black, white, and gold lent a masculine tone to the environment, while large video screens displayed scenes from the show as well as promotional imagery.
Photo: Heidi Gutman/USA Network 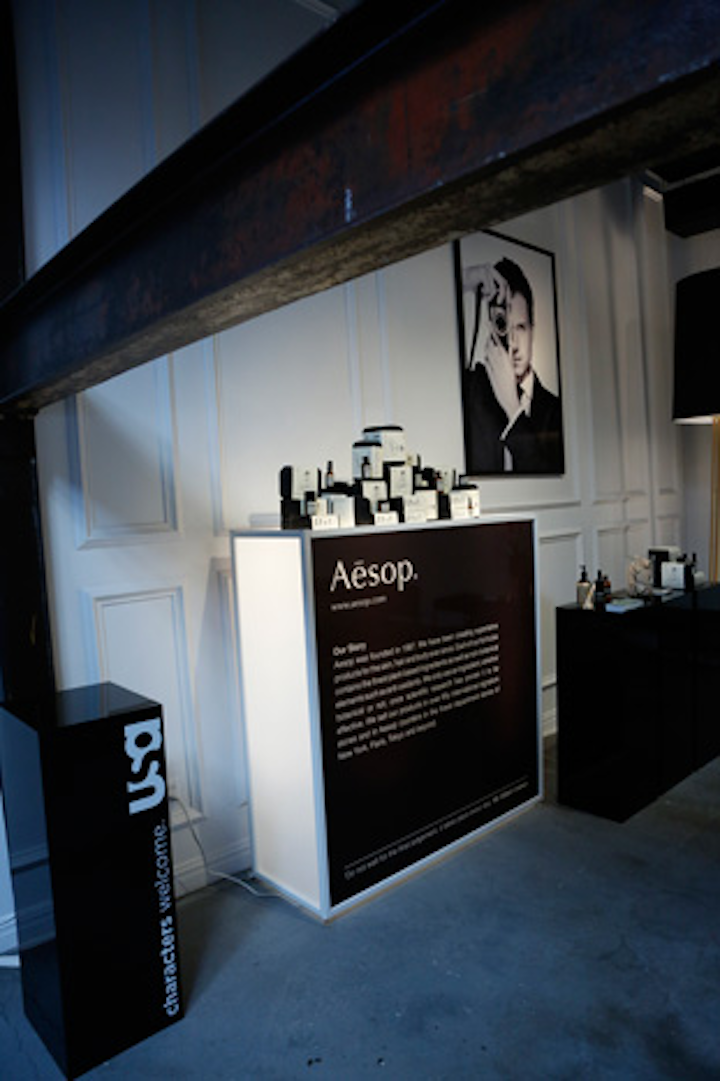 The product displays for the collection of clothing and accessories matched the shop's clean aesthetic and were placed near pieces marked with USA Network's logo or other brand-related imagery.
Photo: Heidi Gutman/USA Network 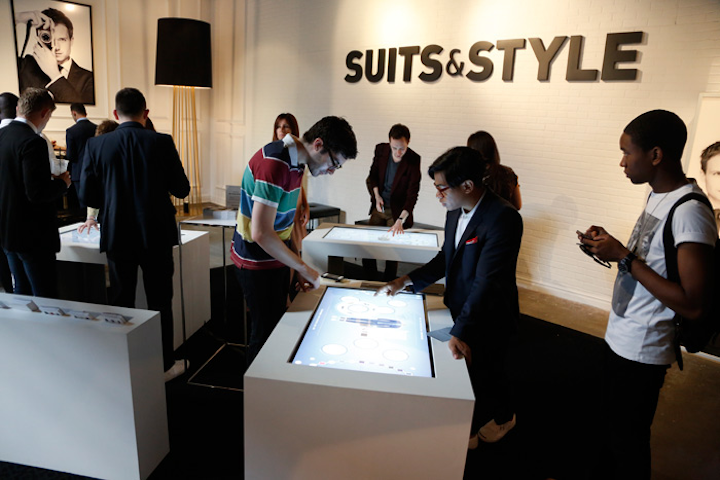 One area of the pop-up store contained interactive touch-screen monitors embedded into tables. Visitors could play digital dress-up using the Mr. Porter products. Once an outfit was created, the look could be emailed to the user, complete with a list of prices.
Photo: Heidi Gutman/USA Network 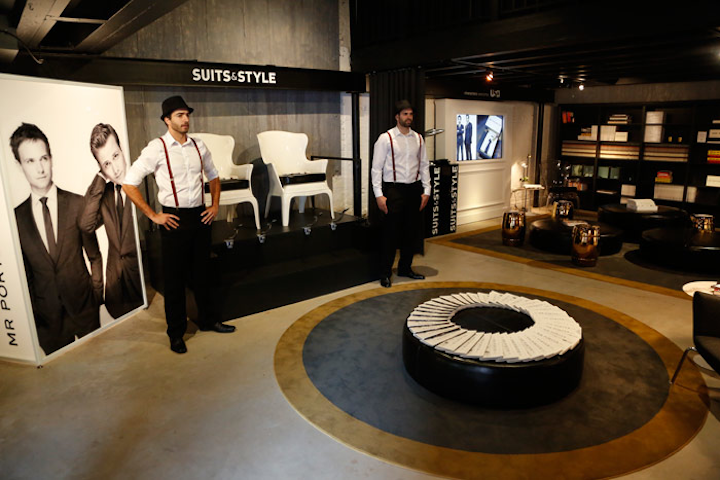 Another section of the pop-up offered complimentary grooming services including free shoeshines from Manhattan Shoe Shine Care, and a nearby den was filled with comfy seating, a bookshelf stacked with copies of partner Vanity Fair's June issue, and a screen showing clips from Suits.
Photo: Heidi Gutman/USA Network 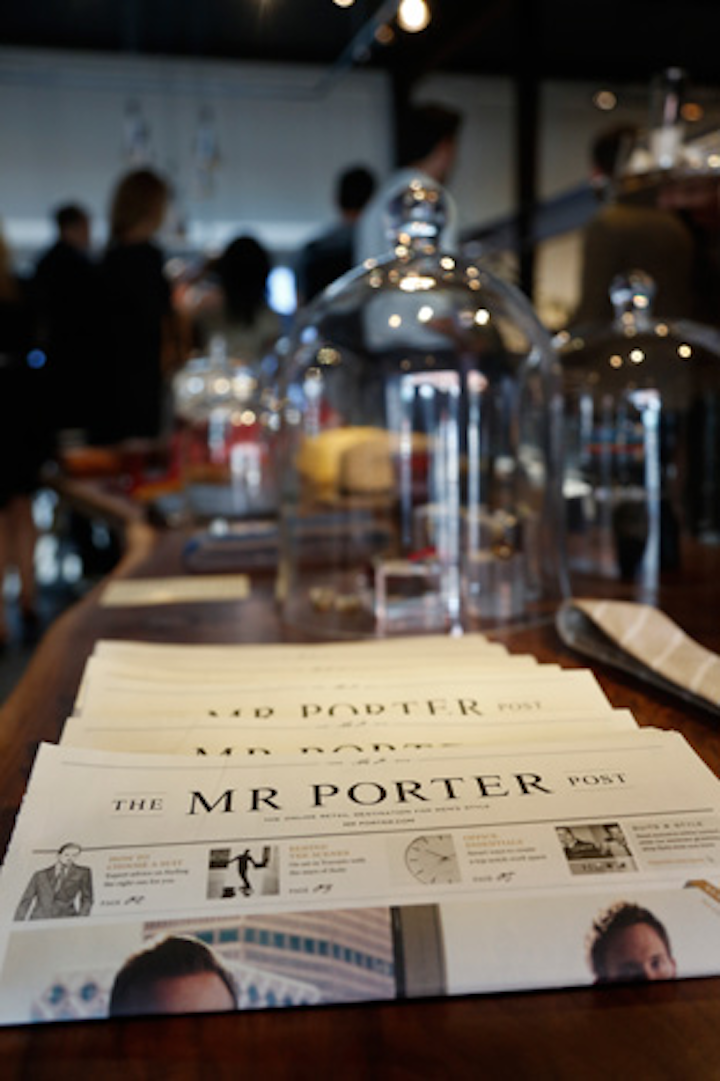 In addition to the microsite and the iTunes app, the partnership between USA Network and Mr. Porter includes a special edition of the online retailer's editorial publication. The issue of Mr. Porter Post included facts and figures about the series, features inspired by the characters, and an article about sharp suits from other TV shows, including USA franchise White Collar.
Photo: Heidi Gutman/USA Network 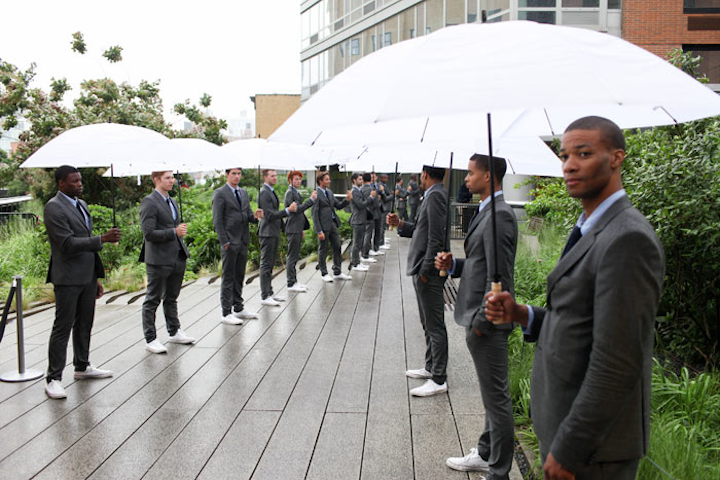 Organizers dealt with the rain at Tuesday evening's show atop the High Line by using the male cyclists to help cover guests as they moved from the street, across the open-air section of the park, and into the event in the covered Chelsea Market passage.
Photo: David X Prutting/BFAnyc.com 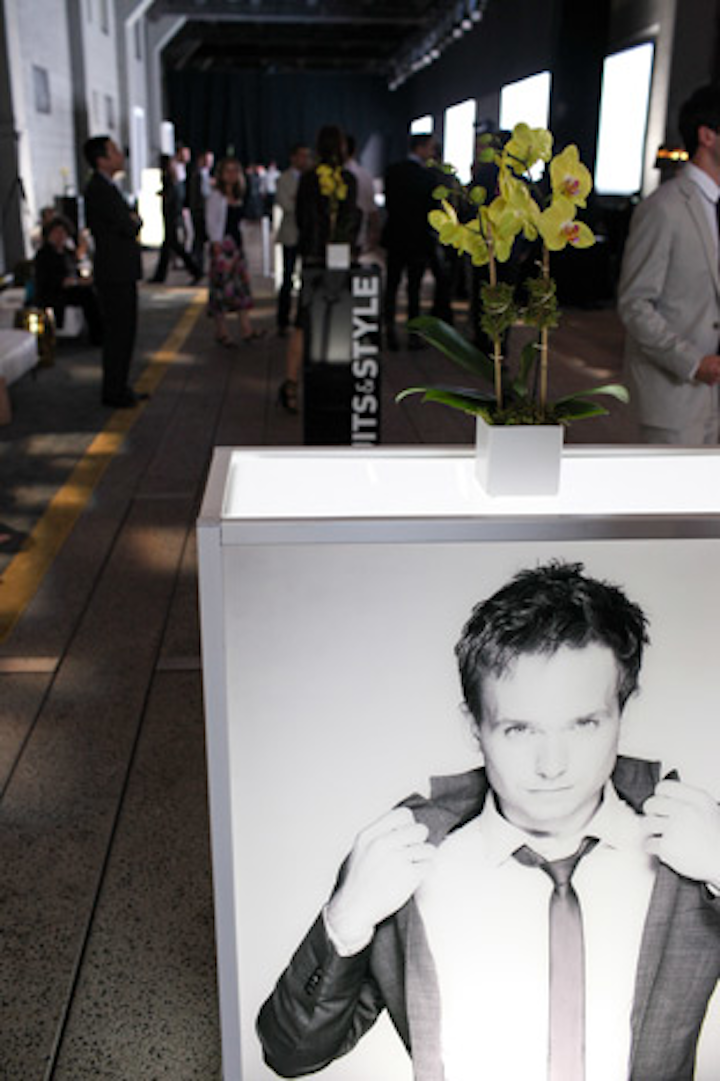 Under cover, the fashion show's environment was separated into two areas. One side was an open lounge with comfy white ottomans and illuminated cocktail tables decorated with black-and-white portraits of the stars of Suits. The rear was set up for the runway presentation, with a long black catwalk running down one side.
Photo: David X Prutting/BFAnyc.com 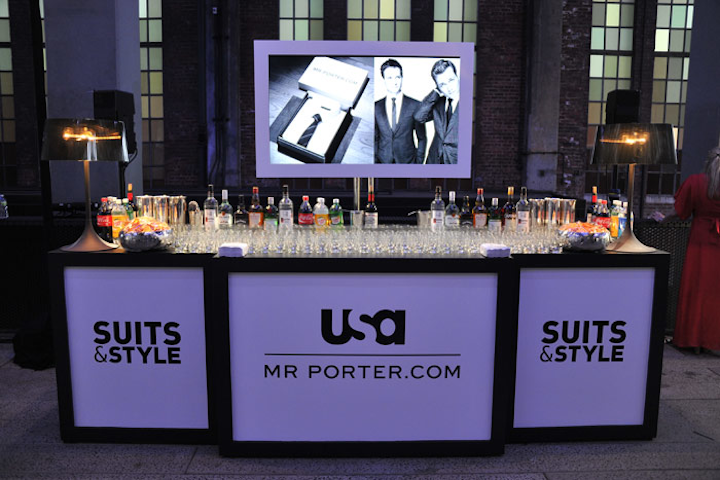 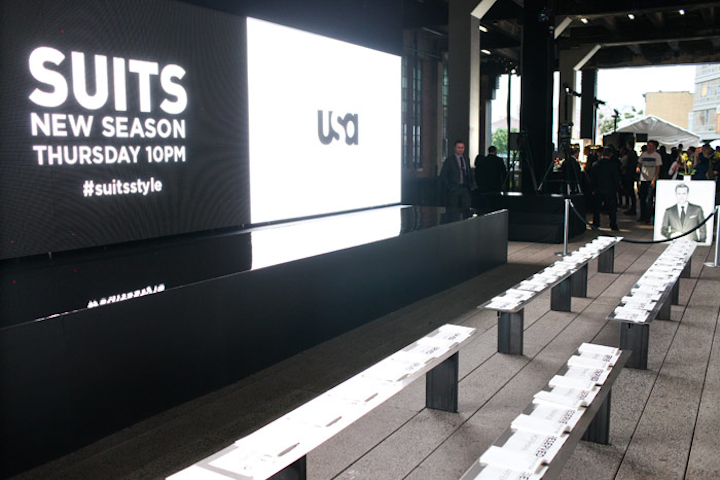 The backdrop for the show was a 60-foot-long LED wall that, before the presentation started, displayed the date and time of the season premiere of Suits as well as the event's hashtag. The video wall ran the length of the catwalk and metal benches facing it were reserved for cast, celebrities, and other V.I.P.s.
Photo: David X Prutting/BFAnyc.com 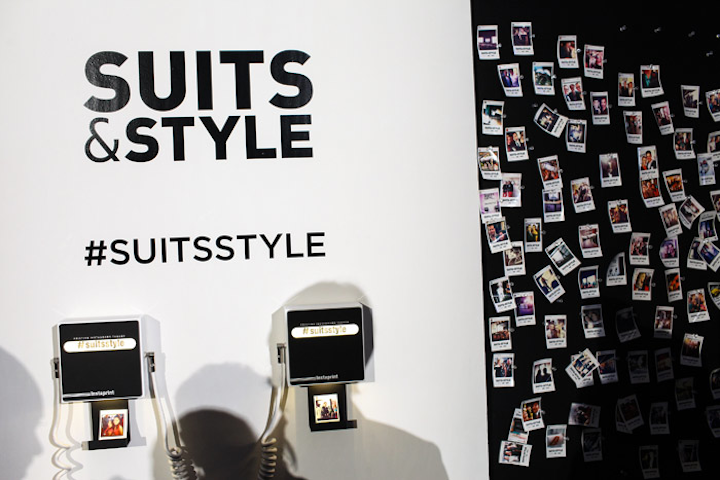 The #SuitsStyle hashtag was also promoted elsewhere at the Tuesday-night event, including on the wall that held Instaprint machines. Guests were encouraged to post snapshots via Instagram, which, when marked with the hashtag, were printed out.
Photo: David X Prutting/BFAnyc.com 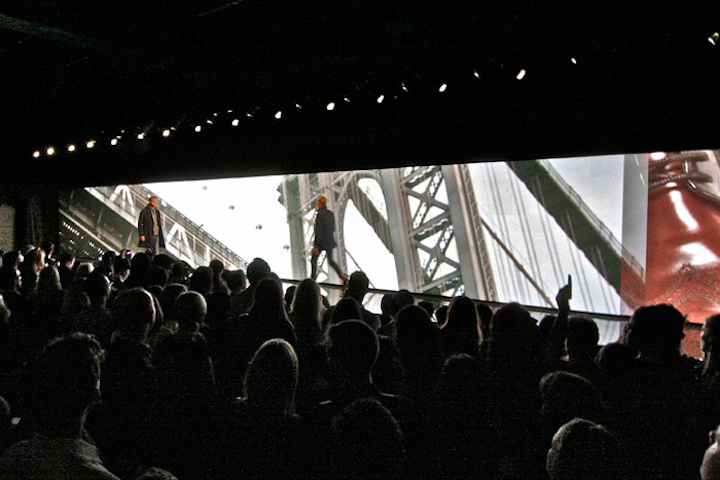 The LED wall served as a dramatic backdrop for the presentation and showcased shots of landmarks in New York, where Suits is set, alongside scenes from the show.
Photo: Brian Brooks/MB Productions
More in Experiential, Activations & Sponsorships