From movie screenings to mass meditations, crowds are growing more and more quiet—in a good way.

“I didn't realize how loud a drone camera is,” says Jesse Israel, co-creator of the Big Quiet, a mass meditation movement that hosts giant moments of silence in unique spaces.

The unexpected buzzkill happened during the group’s second major event, a sunset meditation on an industrial farm (known as the Farm on Kent) at the former Domino Sugar Factory in Brooklyn's Williamsburg neighborhood on August 5. The irony isn’t lost on Israel, who had hired the drone operator to shoot an aerial image of the crowd. “We created noise at an event to celebrate silence.”

As organizer of the Medi Club, a meditation group composed of mostly urban creative types, Israel wanted to be able to bring the practice to the public on a large scale. The first Big Quiet event was held in Central Park's Rumsey Playfield on June 20. Organized in part by the City Parks Foundation and SummerStage, the free event was attended by 1,500 people.

“People think they can't meditate because they don't have a quiet place, then they see a hundred people in a public space being able to find silence,” says Sherri Kronfeld, director of growth at Ziva Meditation, a meditation studio with locations in New York and Los Angeles. This summer, the group offered 30-minute sessions in Bryant Park that were free and open to the public. “It is possible to have a quiet moment in the middle of Midtown.”

Kronfeld and Israel both agree that the attendees at their respective events seem to connect on a deeper level as opposed to at a bar or concert. “As we become more digitally connected, we’re hungry for more human and physical connection, for physical experiences,” Israel says.

To help feed that need, the Big Quiet has teamed up with the Cyclones Bike Club to host a giant bike ride at Burning Man, which will end with a mass meditation and dance party at a secret location in the desert. And on September 21, Israel and his team will hold a floating meditation near the Statue of Liberty—an event made possible in part thanks to new partners.

When it comes to sponsorships, Israel is very mindful. “Meditation is a very sacred thing for many people. ... We’re sort of pushing the boundaries already. We don't want a huge company logo surrounding us.” He adds that a company’s values would need to be in line with Medi Club’s in order to pair up. “It’s about finding the right balance.”

Grip the Mat recently joined forces with EventsDC and Reebok to produce a yoga experience called "[Silent] Soul & Spirits," which will take place at Carnegie Library at Mount Vernon Square on September 19.

The event will feature an outdoor yoga session with SoundOff headphones; a mixer will combine music and instructor cueing, which will be broadcast to the headsets. Afterwards, guests will be able to cool down inside the library with an open bar featuring Skinnygirl Cocktails and healthy small bites from Cava Grill, while DJ Neekola spins tunes. Tickets are $50 per person, which includes the bar and eats. Yoga mats will be available to rent for an additional $5.

“There's a unique experiential aspect to wearing headphones, but also a valuable functionality side—eliminating distraction,” explains Christy Skarulis, co-founder of Grip the Mat, a pop-up yoga and social events company in Washington, New York, and Orlando. “Living in a city, it's tough to avoid ambient noise—sirens, cars honking, people talking. A huge drawing point for yoga is the opportunity to turn off the noise from work, media, etc. Using headphones enhances our ability to facilitate this.”

And it’s not just yogis and meditators hitting the mute button. Decidedly rowdier events have been turning down the volume lately, too.

Thanks to a strict 10 p.m. amplified sound curfew imposed by New York City, Lincoln Center was forced to get a little creative (and quieter) with its outdoor summer programming. Debuting last year, the center’s silent discos have now expanded to locations in each of the city’s boroughs. The free events are part of Lincoln Center Local, an effort to bring its programming and entertainment to all neighborhoods. The noise-free rager features a variety of dance music, including disco, salsa, Top 40, and swing, all selected by three DJs on site, plus there's a professional dance lesson beforehand.

“It’s not actually a ‘disco’ in the modern meaning of the word. Think disco as in dance party,” explains Ryan Dowd, owner of Silent Events. The event production company provides audio, lighting, staging, and tenting services, along with wireless headphone rentals, but does not supply the Lincoln Center events. “Unlike a traditional club-like venue where you can’t hear anyone … at a silent disco, attendees can simply take their headphones off and talk to their friends using their ‘inside voices.’”

So even though it might seem like a party for one, “it is a great communal yet solitary experience. People get very excited to participate,” adds Jill Sternheimer, director of public programming at Lincoln Center.

The success of the center’s silent discos inspired an offshoot event this summer. “We wanted to think of a way to use the headphones for Lincoln Center Out of Doors. And it was just one mental step from thinking silent disco to ‘silent movie,” Sternheimer says. “I had seen venues commission musicians to score music to silent movies but we wanted to do something different.”

On August 7, in partnership with the Film Society of Lincoln Center and as part of its Sound & Vision Series, Lincoln Center Out of Doors presented a screening of the cult classic The Rocky Horror Picture Show in Damrosch Park—minus audio. The audience heard the sound via wireless headphones provided by Quiet Events. Crowd talk-back (a hallmark of Rocky Horror screenings) was encouraged though. Plus, the theater group NYC RHPS performed a live shadow cast during the event, which the 2,000 moviegoers could choose to listen to—or not. 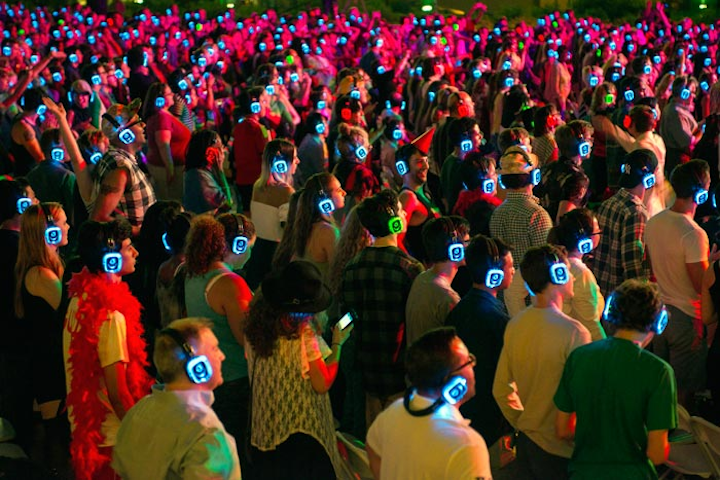 As part of the Lincoln Center Out of Doors festival, attendees viewed a silent screening of the cult classic The Rocky Horror Picture Show in Damrosch Park with the help of headphones.
Photo: Iñaki Vinaixa 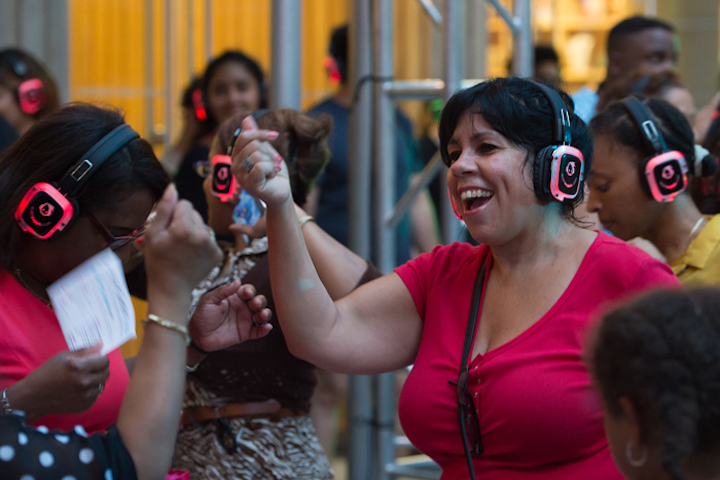 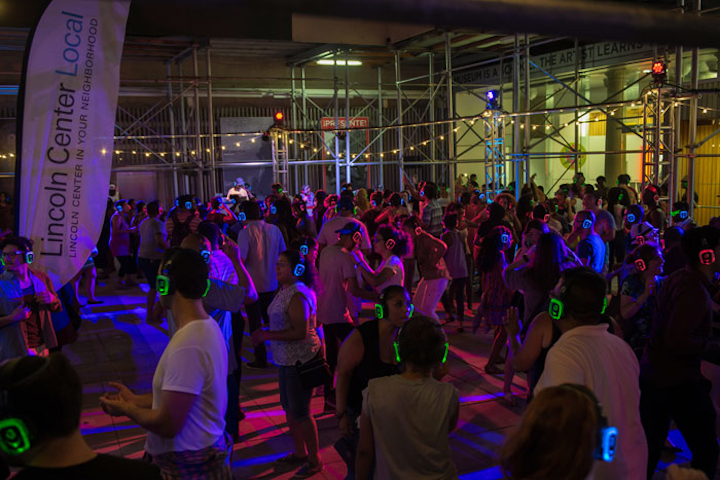 The rest of the center’s silent discos will take place at Snug Harbor Cultural Center & Botanical Garden on Staten Island on August 28, the Woodlawn Cemetery in the Bronx on August 30, and Hunter’s Point Park South in Queens on September 3.
Photo: Kevin Yatarola 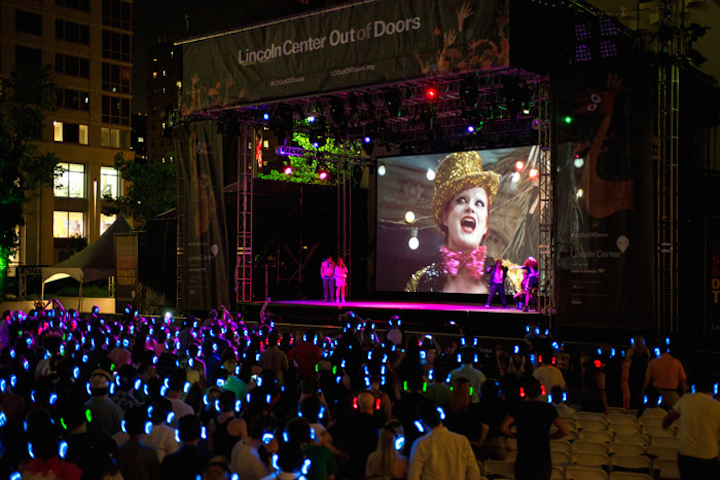 “I had seen venues commission musicians to score music to silent movies but we wanted to do something different,” said Sternheimer about the Rocky Horror screening.
Photo: Iñaki Vinaixa 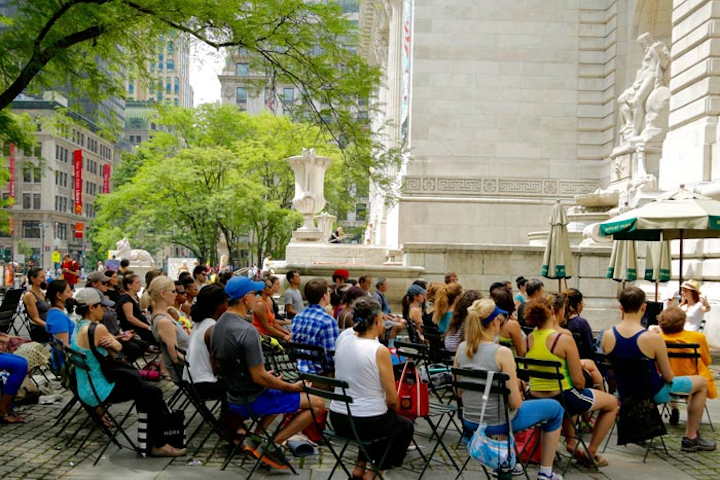 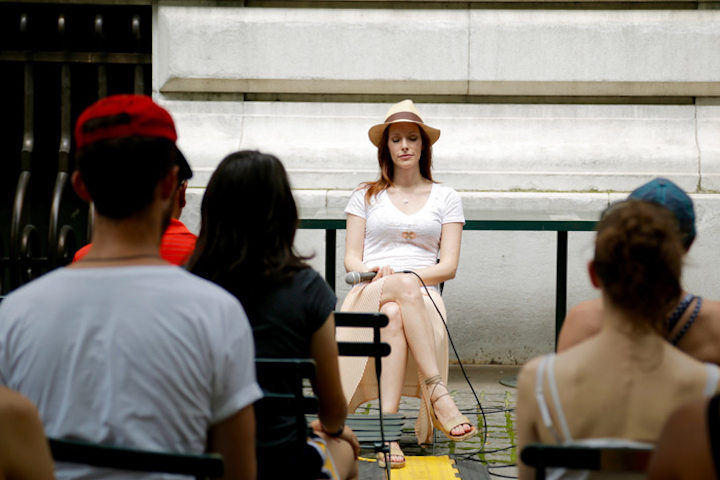 Ziva Meditation also offers a guided group meditation in Studio 34 at One Penn Plaza every Thursday at 1 p.m. until September 17.
Photo: Courtesy of Ziva Meditation
More in Experiential, Activations & Sponsorships