Did Cheetos Have the Hottest Fashion Week Event? 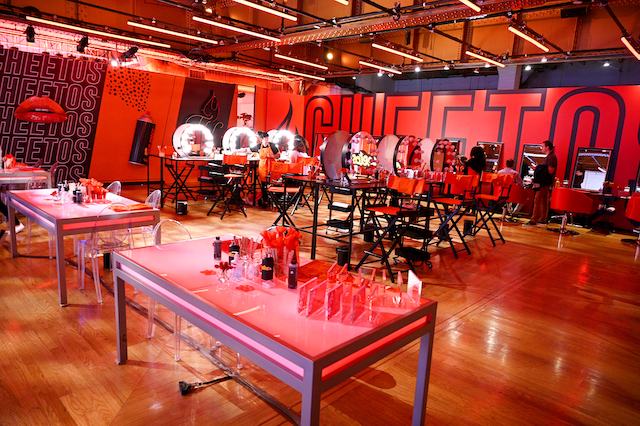 One of the main spaces included style bars for hairstyling, makeup application, and manicures, all in the orange and red shades of Cheetos original and Flamin' Hot flavors.Photo: Dave Kotinsky/Getty Images for Frito-Lay

NEW YORK—September in New York tends to be highlighted by fashion industry events from major names like Tom Ford, Marc Jacobs, and Rihanna, but arguably one of the most outrageous and memorable fashion events in the city this year came from Cheetos (yes, you read that correctly.)

During the kickoff weekend of New York Fashion Week, Cheetos held an adjacent event, the “House of Flamin’ Haute,” inviting media, influencers, and fans of the brand to get makeovers and witness a fashion show themed around the crunchy orange snack.

Cheetos-inspired outfits, hairstyles, and makeup might raise some eyebrows, but the idea is more common than one would think, according to Brandi Ray, senior director of marketing for Cheetos. Ray said the event concept was sparked by fans of the brand who have shared “their interpretations of the ‘Cheetos look’ across social media." This is similar to how the Spotted Cheetah restaurant pop-up in 2017, another of the brand's out-of-the-box events, was inspired by fans sharing meals they created with Cheetos on social media.

The fashion event, which took place September 5 to 7 at the Altman Building, kicked off with a V.I.P. event that included a runway show with 21 looks inspired by fans on social media and selected by fashion influencers. The brand tapped the Marketing Arm to produce and design the space, which featured multiple, cheeky photo ops, a video booth, salon stations, and an overall atmosphere meant to capture the spirit of the brand. Cheetos developed the concept with agencies OMD and Harrison & Shriftman.

Later the space was open to the public; fans could make an appointment for a salon service on a custom website or share their Cheetos-inspired look on social media with the appropriate hashtags to score a reservation.

“The Cheetos House of Flamin’ Haute embodied all the fun and mischievous attributes of our brand and, of course, our fans,” Ray said. “The runway show and style bar were designed to fully immerse our guests in the colors, textures, and tastes of the snacks, while creating a buzzworthy experience worth sharing.”

Naturally, the event incorporated the actual snack into food and drink offerings. Guests could try sushi, sliders, cocktails, and more that incorporated Cheetos. At a snack bar, guests could fill bags with their choice of 10 different variations of the snack.

The event drew a decent amount of attention on Twitter, with some users making (light-hearted) fun of the surprising concept and sharing videos of rapper Saweetie’s performance on the runway. For Cheetos, the social media chatter was welcome.

“It's important for us to connect and engage with as many Cheetos fans as we can, and we use social media to help achieve that,” said Ray, who also noted this won’t be the last time the brand stages an unexpected event. “We’re continually working on new ways to surprise and delight fans all across the nation.”

Scroll down to see the highlights from Cheetos’ first fashion and beauty event. 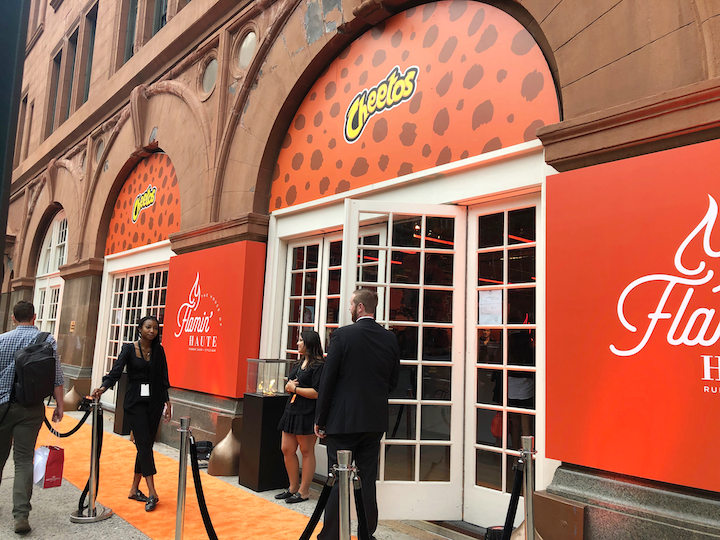 The Cheetos "House of Flamin' Haute" took place September 5 to 7 at the Altman Building. The opening night event rolled out an orange carpet for entrances.
Photo: Ian Zelaya/BizBash 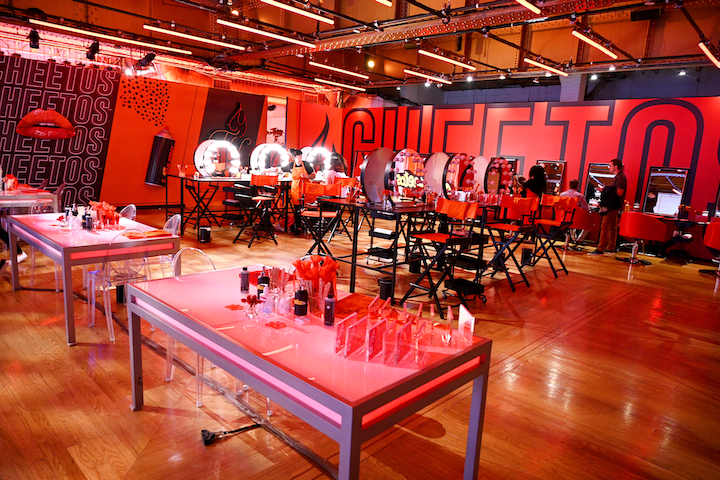 One of the main spaces included style bars for hairstyling, makeup application, and manicures, all in the orange and red shades of Cheetos original and Flamin' Hot flavors.
Photo: Dave Kotinsky/Getty Images for Frito-Lay 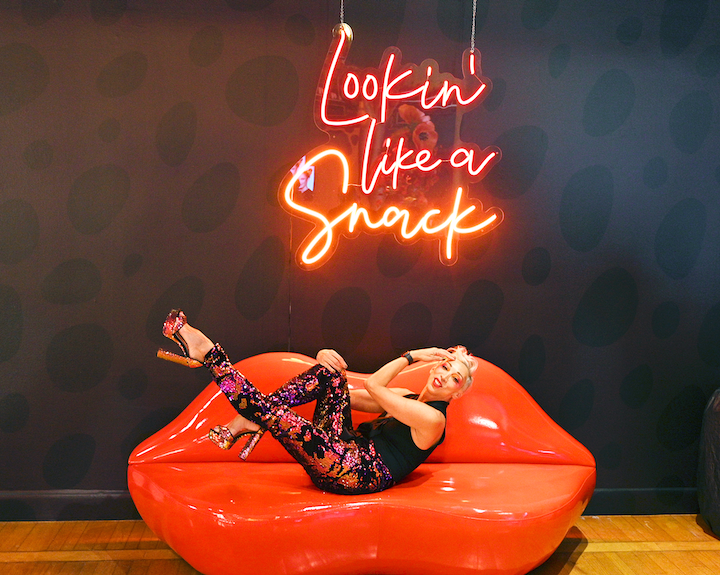 Cheeky photo ops included a rendering of the popular phrase "Lookin' Like a Snack" rendered in neon, above a lip-shaped seat.
Photo: Dave Kotinsky/Getty Images for Frito-Lay 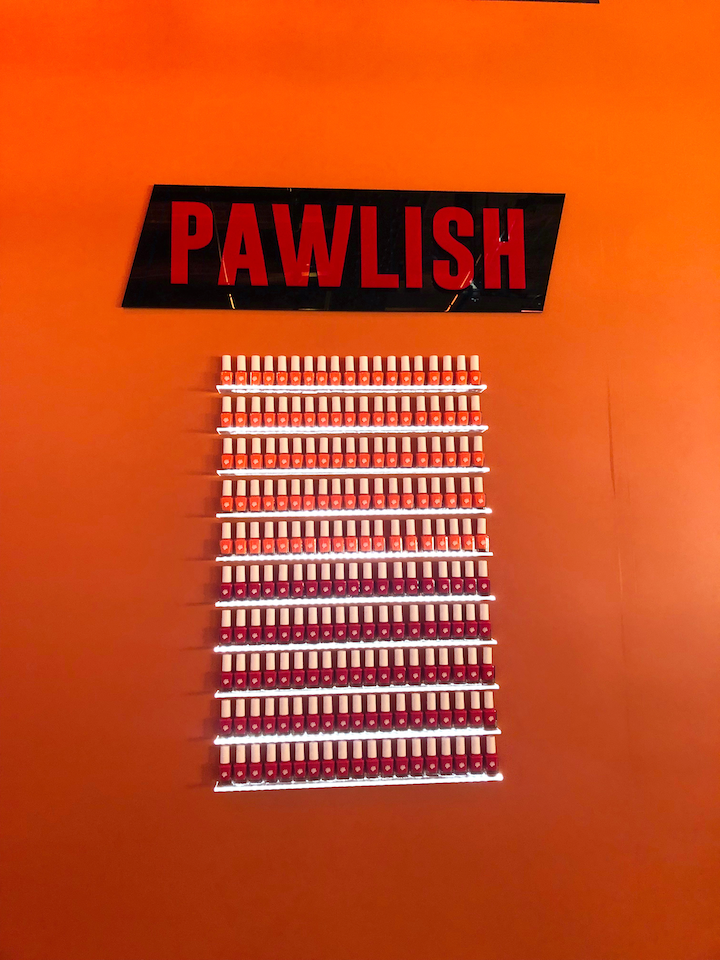 Nail polish came in two shades that were displayed on a wall underneath a Cheetos pun.
Photo: Ian Zelaya/BizBash 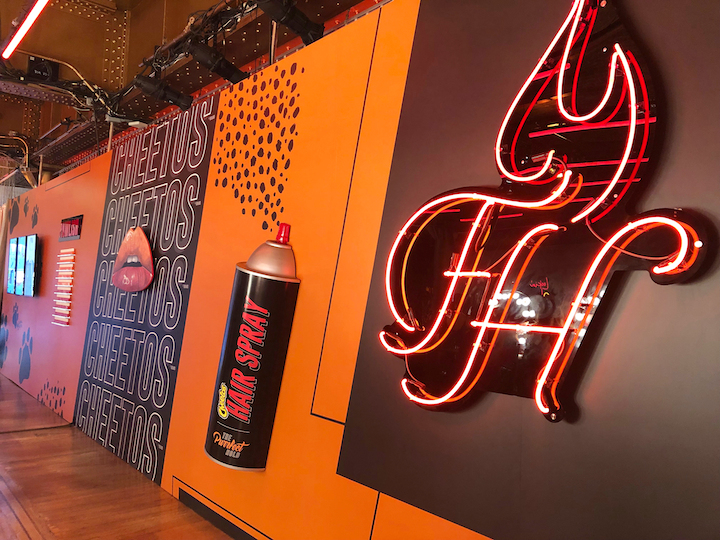 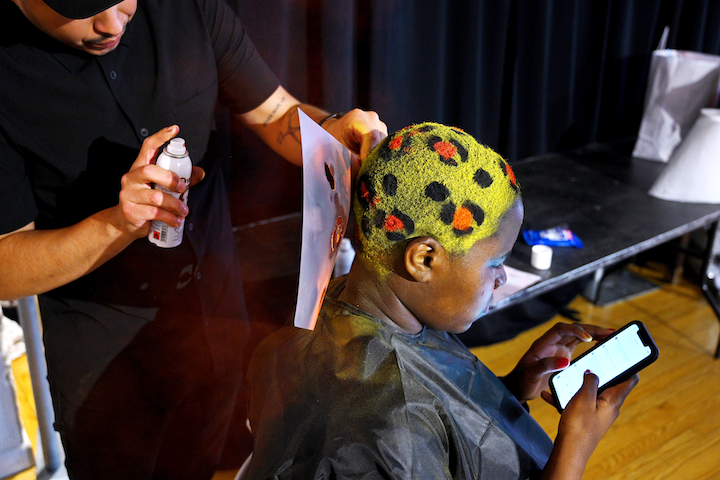 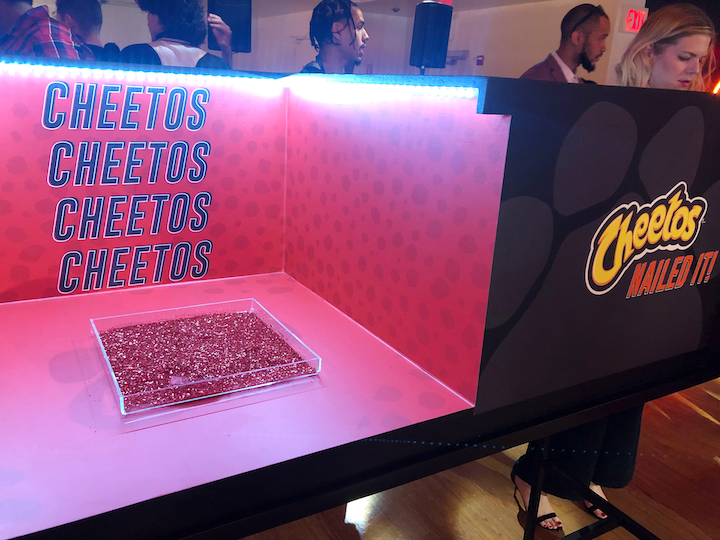 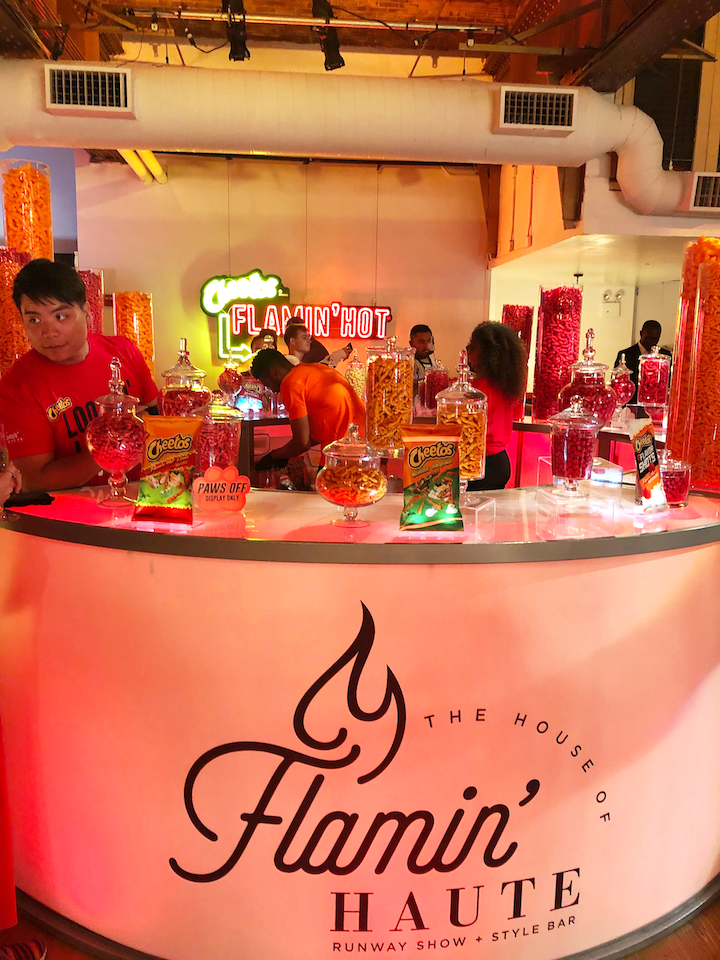 Servers at a circular snack bar offered 10 different flavors of Cheetos, which guests could mix and match.
Photo: Ian Zelaya/BizBash 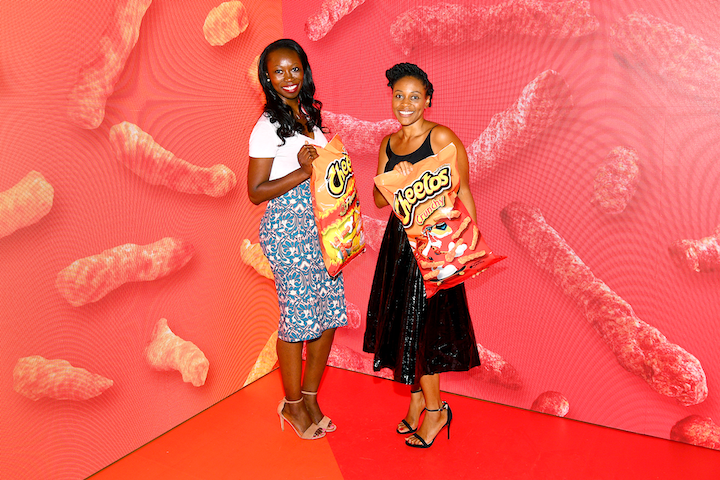 At a video booth, guests could pose with oversize bags of Cheetos against an animated backdrop.
Photo: Dave Kotinsky/Getty Images for Frito-Lay 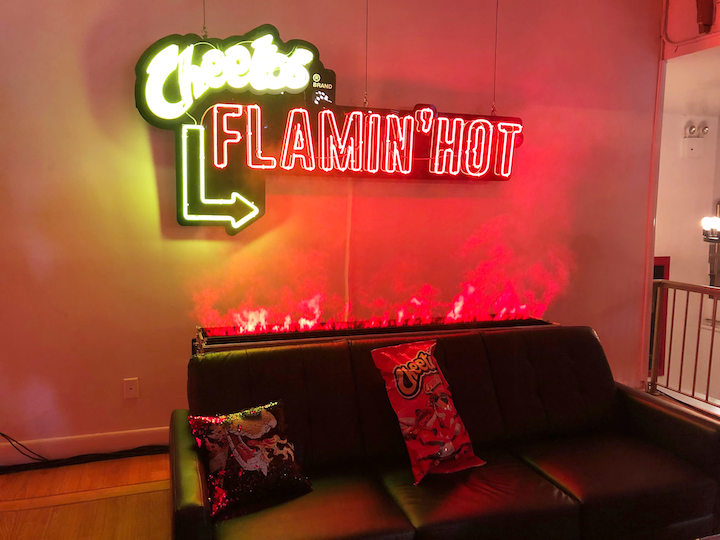 Another photo op featured a couch with a faux flame effect and sequin pillows with an illustration of the brand's mascot, Chester Cheetah.
Photo: Ian Zelaya/BizBash 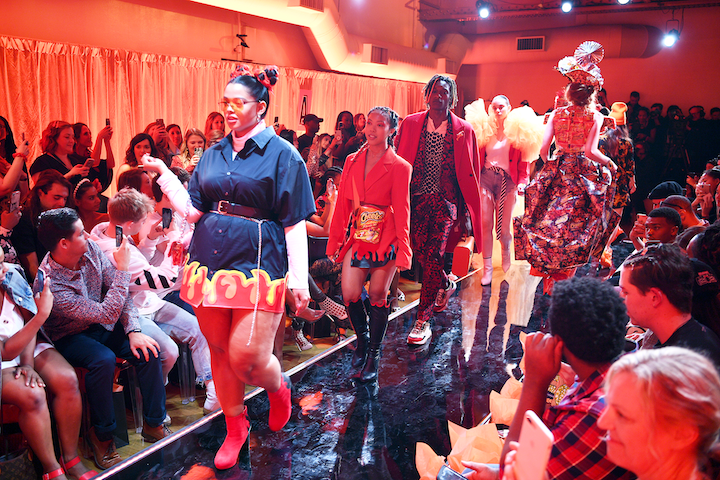 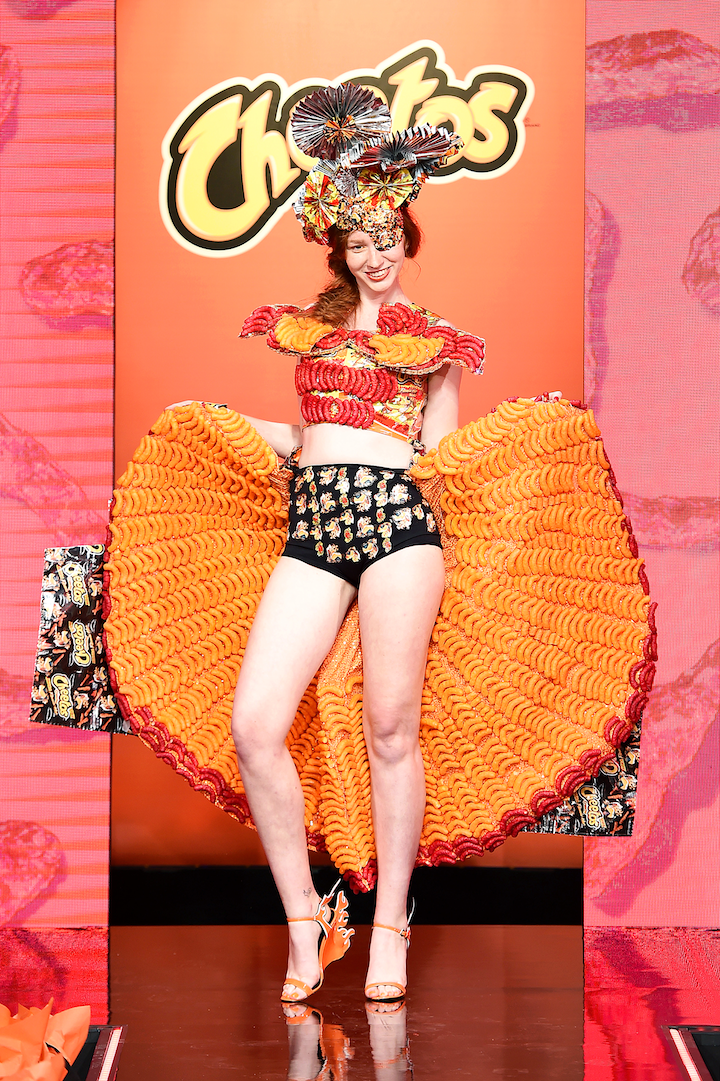 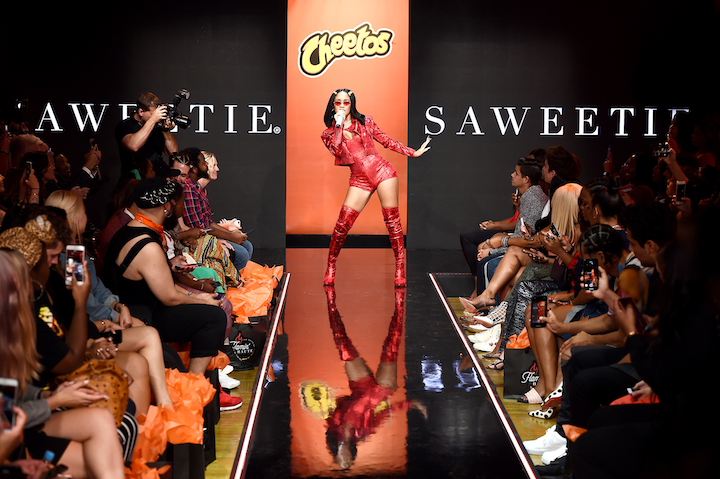 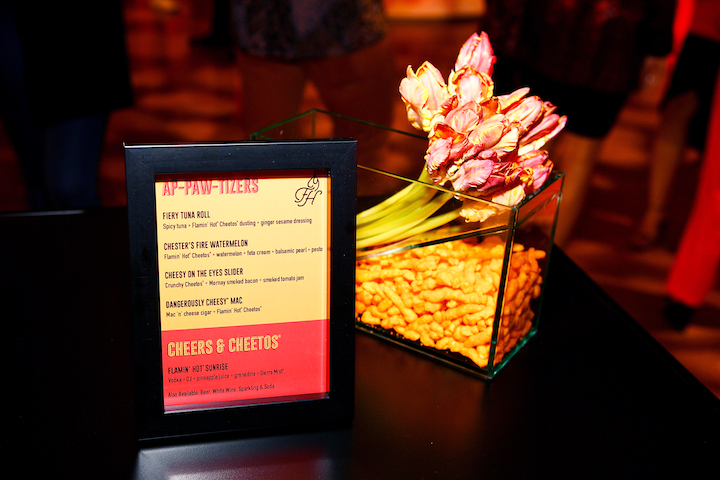 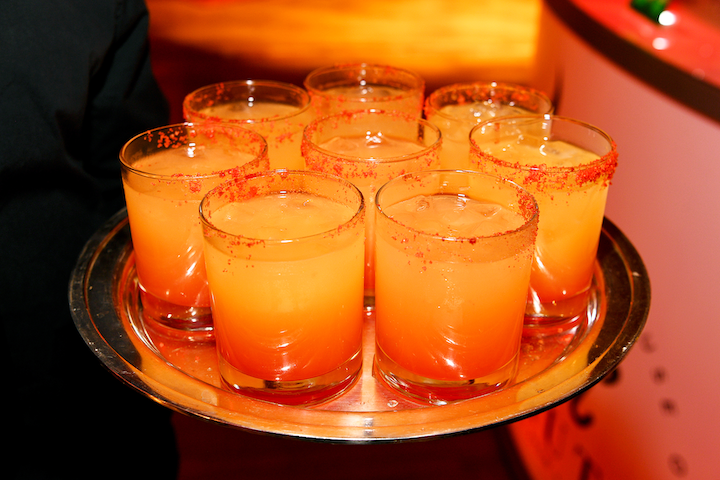 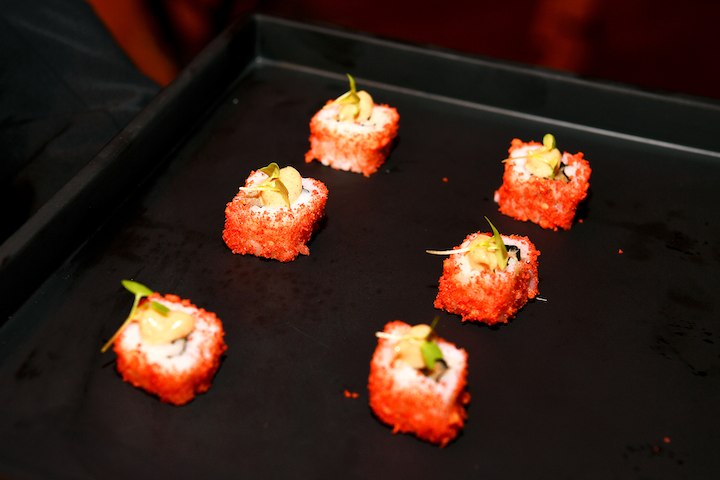