How to keep talent from going off-book and out-of-bounds. 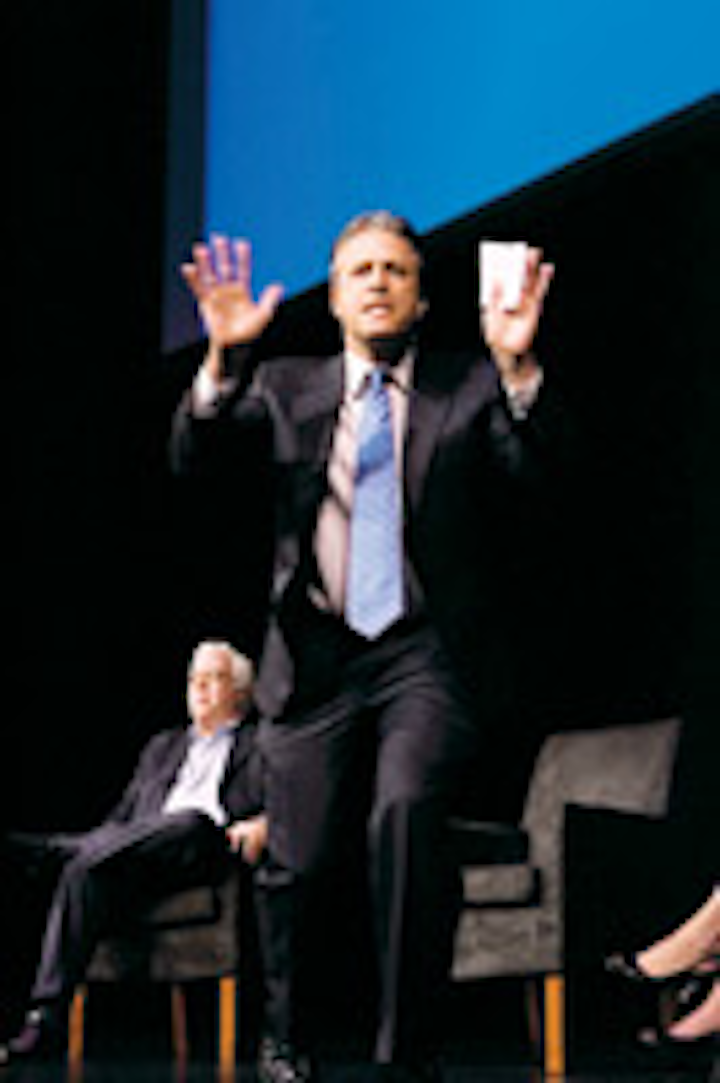 Jon Stewart at a 2005 Magazine Publisers of America event
Photo: M. Szwajkos/ Getty Images
The great thing about napkins or centerpieces or tents is that they don’t talk back. They don’t have a bad day, forget their audience, or have a few too many cocktails before an event. Unfortunately, the same cannot be said for people, and when a planner enlists someone as a host or M.C., a certain element of risk and unpredictability gets added to the mix. And a poor performance can upset guests, sponsors, journalists—and, of course, the process of producing the event itself.

For example: Rosie O’Donnell made some jaws drop at the New York Women in Communications’ Matrix Awards luncheon last year, dropping the F-bomb and unleashing a less-than-refined rant directed at Donald Trump. In 2005, Jon Stewart ruffled feathers while mediating a panel for the Magazine Publishers of America, during which he skewered—some thought inappropriately—the magazines of -panelists Dave Zinczenko (from Men’s Health) and Kate White (from Cosmopolitan). And tongues wagged after Stephen Colbert addressed the 2006 White House Correspondents’ Association dinner crowd, which included the commander in chief himself, with an irony-rich routine that many felt punched, rather than poked fun at, the president.“I had one celebrity come to a luncheon who signed on to M.C.,” says Rachel Gross, director of corporate events at AOL. “She was horrible. It [ran] late, she had no respect for us and the things we had briefed her on in advance, she didn’t take our direction.... She totally didn’t follow the run of show.” In addition, Gross received revised remarks from the celeb’s representative moments before the event started, which found her frantically trying to download an attachment as guests were arriving.

So are planners at the mercy of the talent they bring in to work such functions? Is there anything they can do to prevent an M.C. from behaving badly? What are the ramifications of these occurrences, and if they do happen, what can you do to mitigate the fallout?
“I think the key is to make sure you really know whom you are hiring.... You’ve got to understand what they will and won’t do,” says Martin Perelmuter, president of Toronto-based talent booking firm Speakers’ Spotlight. “Some people are good at taking direction, and other people feel they’re an artist or what have you, and once they get up there it’s stream of consciousness and whatever pops into their head they might say at any given moment.”

One of the most effective lines of defense against unpleasant surprises can be a talent booker or celebrity wrangler. “Deal with people you know and trust so that you can ask for an honest opinion and say, ‘What do you really think of this person?’” Perelmuter says. “Because there are [agencies] out there that are just going to say whatever needs to be said to get the booking, and then there are ones that have a reputation that’s earned over time for providing very honest opinions on people.” Even if a particular speaker is entertaining—and available—a good wrangler will advise against booking him if he doesn’t fit the event.

“[Planners] have to really understand what the event is and what the reality of what they’re trying to accomplish is,” says Don R. Epstein, C.E.O. of the New York-based Greater Talent Network, which books headlining speakers and M.C.s for more than 1,500 events a year. “We’re really clear on the personalities. When somebody says, ‘We want this type of person’ or ‘We want this specific individual,’ we’ll try to go through everything ... and say, ‘Listen, let’s be aware of certain things. There are certain celebrities who will not tailor. Their act is what their act is. And then there are others who will say, ‘I am known for one thing, but given what you’re trying to accomplish, I can do this.’”

Clear communication and expectations are also crucial when preparing talent for an event. “It’s very reasonable to put limits on something and say, ‘O.K., in this particular context, here are the things you can’t do: no swearing, no sexist jokes,’ whatever it happens to be, and get that person to sign off on that,” Perelmuter says. G.T.N. works to connect meeting planners and talent in some kind of dialogue weeks before an event and enlists planners’ help in providing a dossier of information to the agency’s client. “We want to know even the most minute detail: what to wear, who’s going to be introducing them, who are the people that make up the audience, who’s been there in the past, what’s worked, and what hasn’t worked,” Epstein says.

As Lori Levine, founder and president of celebrity-wrangling firm Flying Television in New York, points out, you also need to be prepared to address any unexpected developments with speakers. “If you’re hiring a comedian and something happens in the world and this comic doesn’t say anything, it kind of doesn’t make sense,” she says. “[For example] if Britney Spears just signed a deal with L’Oréal and shaved her head the next day, and you’re doing a convention for L’Oréal ... it’s up to you as a talent booker or a person representing a corporate entity to say, ‘Look, we all know what happened, so why don’t we just talk about whether or not you’re going to say anything.’ Because if you’re concerned that that’s going to happen, then chances are something may happen. It doesn’t hurt you to say, ‘Look, this is going to be an issue and here’s why.’”

At the same time, being realistic about the person you are hiring and how many constraints you can, or should, put on him or her is important to keep in mind. “If you’re hiring a particular comic who you know works blue and you have to say to them, ‘Don’t use bad language,’ well, you’re not doing your job, because you should have never hired somebody who uses bad language if they can’t use it in their act,” Levine says.

“When someone hires someone who’s known to be controversial or who’s known to be edgy, and then they do exactly what it is they do and the organizers are upset because they feel the person has crossed the line, you’ve got to think about who it is that you hired and whether it was really unexpected,” Perelmuter says. “Sometimes people are popular because they’re controversial or because they’re outspoken, and you can’t get the watered-down version, necessarily.”

Case in point: Ms. O’Donnell. “Everything Rosie O’Donnell says and does gets in the paper. It’s probably one of the reasons she was hired,” Levine says. “You can’t censor her. You bring her in specifically for a reason.”

Likewise, Mr. Colbert. “Anybody who watches Stephen knows what you’re going to get, so I’m not really sure what [the White House Correspondents’ Association] thought they were going to get differently,” Epstein says. “Sometimes I don’t think enough due diligence is done. I think people just come up with a name and don’t really understand what the person represents and how [he or she is] going to come off at the event.” (Indeed, Mark Smith, the 2006 president of the White House Correspondents’ Association, told The New York Times that he had not seen much of Colbert’s show on Comedy Central prior to booking him for the event; he also told the paper he felt the comedian was “very funny.”)

Gross from AOL says a critical distinction can be whether speakers are getting paid. “That’s the linchpin—if they know it’s a job,” she says. After her bad experience with the freewheeling, ad-libbing celebrity, she wondered, “How seriously did she take it, because we were not paying her?”

So what is the best plan of action should a host go off the rails? “If it’s warranted, it may make sense to issue some kind of statement or apology, but oftentimes at events things can happen and ... you can do damage control at that time and then move on,” Perelmuter says. “It may be better to just leave it in the past.”

“I feel that underreacting rather than overreacting is always going to be the best case scenario, and for the press, it seems to be the thing that makes stories go away,” Levine says. “The press is going to jump on a story, but the reason why it would have legs is if the client or someone gives it some more meaning.... If you’re running into a situation that is less than dignified, you can still have dignity by your reaction and how you are going to handle it.”

Howard Polskin, senior vice president of communications for the Magazine Publishers of America, seems to agree. Of Stewart’s performance at the group’s panel, he says, “That was three years ago. It’s in the past, and we’re focusing on the future. We’ve moved past it.”
More in Programming & Entertainment