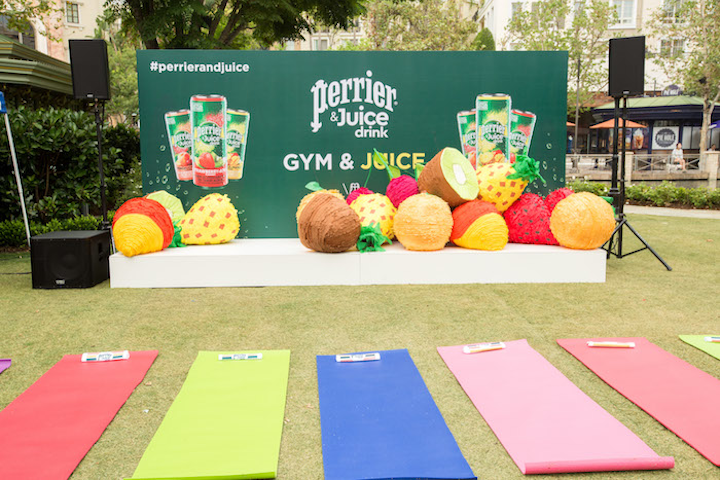 To celebrate the launch of Perrier & Juice, a new product made with mineral water and real fruit juices, Perrier hosted a “Gym & Juice” pop-up at the Americana at Brand in Glendale in late August. A partnership with Y7 Studio, the event featured Vinyasa yoga sessions, live DJs, and fruit-theme photo ops.
Photo: Casey Scott for Perrier

In Case You Missed It
We learned about Kimpton's new social experiment, which uses experiential components to foster a sense of community at the Kimpton Everly Hotel in Hollywood. We also took a look at the growing trend of positive-message walls at events, including six recent examples in the L.A. area.

In the News
To celebrate its 100th anniversary, the Los Angeles Philharmonic and CicLAvia are hosting a massive public festival on Sunday. Curbed Los Angeles: “The supersized block party will feature concerts, art installations, and food trucks at six ‘hubs’ along an 8-mile route that will stretch from the Walt Disney Concert Hall to the Hollywood Bowl. … The entertainment line-up is extensive, with some 1,800 performers slated to croon and dance.” https://bit.ly/2uuYRWz

The highly anticipated Hello Kitty Grand Cafe opened in Irvine on September 14. LA Weekly: “It's the brand's first permanent cafe concept, and offers both afternoon tea and a cocktail service in its private Bow Room. … The level of detail in everything is incredible, from the bar stools with bows on their back to the tea stand in the shape of Hello Kitty's head. It's all custom-made and all Hello Kitty–branded.” https://bit.ly/2Dsm6s8

To improve guest flow in anticipation of the upcoming Star Wars: Galaxy Edge opening, Disneyland has been removing seating around the park. OC Register: “Eventually, Disneyland officials said, all of the removed seating will be replaced in other ways. … Even without the addition of Star Wars land, the 85-acre Disneyland has become increasingly crowded over the last 20 years, pleasing Disney corporate shareholders but creating logistical problems and complaints. It’s the No. 2 most visited resort in the world.” https://bit.ly/2NEYG7y

Digital firm Moxie Marketing Agency has launched a new marketing resource for nonprofits, dubbed the Digital Marketing Academy. The online program is designed to coach nonprofits on how to grow and optimize their online presence.

Overheard
"It needs to make you feel alive and sharp, like you’re walking through The Wizard of Oz when it’s black and white and all of the sudden it’s life in color. Guttural, soulfully delicious. If you don’t want to go sit in a corner while no one’s looking and eat five of them in an unapologetic way, we’re not there yet.”

—Milk Bar founder Christina Tosi, speaking to Variety about what makes a good dessert. The chef opened the first West Coast location of her wildly popular dessert chain on Melrose Avenue on September 22.

On the Scene
To celebrate its new footwear collaboration with Vans, apron company Hedley & Bennett held a launch party on Tuesday night that was filled with crafty, colorful details.

At a launch party for @hedleyandbennett’s collaboration with @vans, guests can customize their own aprons, key chains, and wall art. #BizBash #BizBashLA

Other event highlights to look for this weekend include Music Tastes Good, a combination food festival and music festival in Long Beach, and the Abbot Kinney Festival, which draws 120,000 people to Venice each year.

Later in the week, local event production firm Bianchi Productions will host a fall-theme launch party on October 4. The company was founded by Mandy Bianchi, a veteran of Sequoia Productions, Extraordinary Events, and G’Day USA.