How the San Francisco Symphony Used Design to Convey Peace, Beauty, and Inclusion

Working with longtime collaborators Blueprint Studios, the symphony created nine design-heavy events in one night for its 107th opening-night gala.

More than 3,500 guests flocked to the San Francisco Symphony’s 2018 opening-night gala on September 5 to hear Itzhak Perlman join the orchestra for an evening of Bach and Hollywood film scores. But the violin virtuoso’s performance wasn’t the only highlight: From the custom floral-print arrivals carpet to the world-class concert to late-night dancing in the street, the symphony once again proved that the 107-year-old institution knows how to throw a party.

Unlike the city’s opera and ballet galas, which rely on San Francisco City Hall’s stunning Beaux-Arts details as a backdrop, the symphony constructs its pre-performance and after-party venues from scratch. Two weeks prior to the gala, Hensley Event Resources began the process of turning the Louise M. Davies Symphony Hall’s modest parking lot (known to staffers as “Lake Louise”) into a tented pavilion to host the patrons' dinner and after-party.

Gala co-chairs James Hormel and Michael Nguyen-Hormel wanted the spaces to feel inviting, while still classic and sophisticated. Together with longtime collaborators Blueprint Studios, they decided to make flowers—symbolizing peace, beauty, and art—the focal point of the design. Floral moments accented with black, gold, blush, and white tones were woven through both the pop-up event areas and the symphony hall, appearing in elements through each phase of the night, from cocktail parties to the pre-concert champagne promenade to the after-party.

“We tried really hard to make each space and each experience uniquely beautiful and exciting,” said Shannon Gurley, senior director of business development and design at Blueprint Studios. “There was so much symbolism throughout the evening, but the most important message that we hoped to convey was that this was a celebration of love, art, and music.”

With more than 100 Blueprint Studios production team members executing nine events throughout the evening, the gala was a herculean undertaking that included four simultaneous dinners catered by McCalls and two concurrent cocktail parties. For each experience, organizers wanted to ensure that guests felt included. The solution, they decided, was varied seating arrangements accented with custom-fabricated floral glass installations that created a series of vignettes throughout the space.

“When you have a room of just round tables, the only way to feel special is by sitting in the middle of the room or near the stage. When you have a room filled with a variety of table settings, the conversation shifts and people get excited to see a black mirror-topped table or a curved banquette table or even a table that is nestled within an art piece within the space,” Gurley explained.

Lenticular panels established locations within the tent that Blueprint Studios could arrange tables around, and semi-translucent graphic panels served as visual points of interest (and selfie backdrops) while allowing attendees to see across the room.

After dinner, revelers decamped to the concert hall for the main event—Michael Tilson Thomas conducting the symphony with special performances by Perlman; staffers then had 90 minutes to flip the patrons' dinner tent into a club-like setting for dancing and socializing. When the concert ended, guests were welcomed back to a refreshed space with more than two dozen local restaurants and bars providing drinks and snacks.

Those who wanted to breathe the fresh air on a typically chilly San Francisco evening warmed up on the block party dance floor with DJL! or under one of the heat lamps or complimentary blankets in the outdoor lounge. (“We started the blanket trend last year as it was the coldest year yet. It was so popular we brought it back again this year,” Gurley said.) Inside the tent, partygoers swayed and twirled to pop hits with the Cheeseballs, while more than 300 gold- and rose gold-illuminated glass pendants twinkled in time with the music.

Much like in Cinderella, the party ended at midnight, but the fairy-tale evening will live on: Proceeds from the opening-night gala benefit the San Francisco Symphony’s artistic, education, and community programs, which serve nearly 100,000 children, students, educators, and families in the Bay Area annually.

Here's a look inside the event's dinners, cocktail receptions, and after-parties. 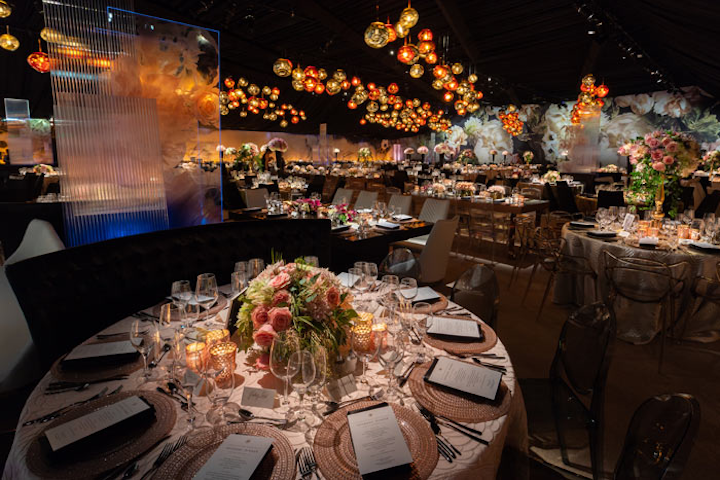 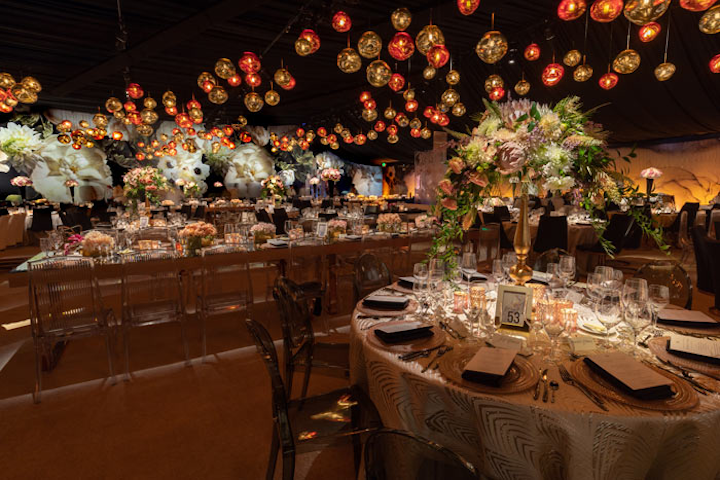 The event’s 3,500 attendees split off to four concurrent dinners, the largest of which took place in a 12,000-square-foot tent outside the Louise M. Davies Symphony Hall. More than 300 gold- and rose gold-illuminated glass pendants hung from the tent’s ceiling, and eye-catching floral bouquets created focal points. 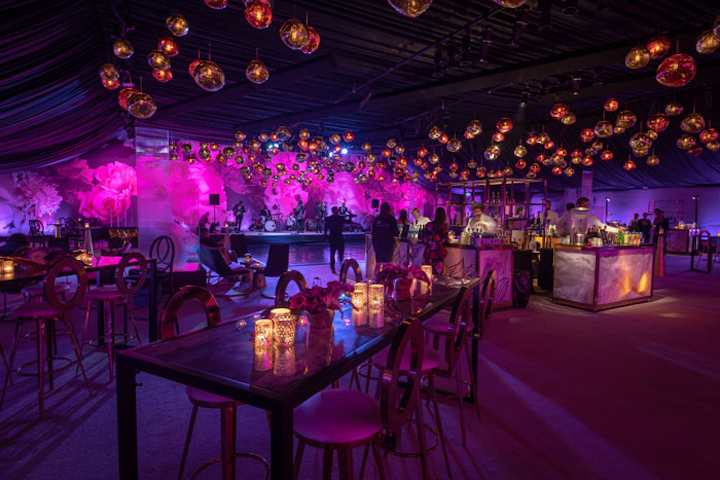 After dinner, while guests went inside the symphony hall for the performance, the Blueprint Studios team had 90 minutes to transform the tent into an after-party space. The overhead pendants remained, and dinner tables were replaced with a bar area, cocktail tables, and couches. 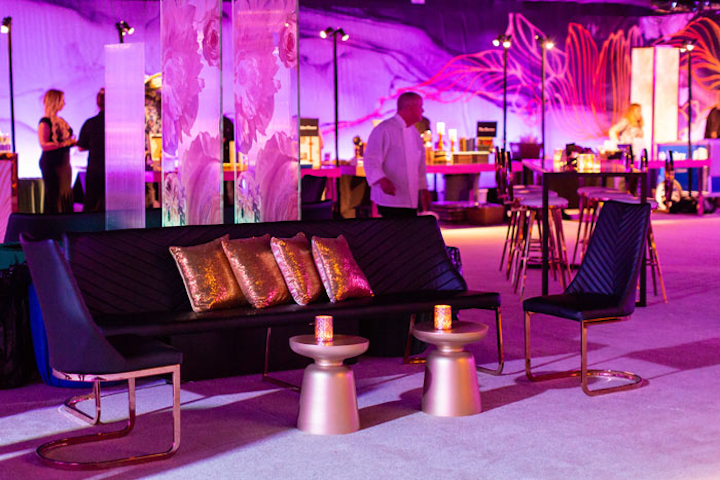 The floral glass installations were also worked into the after-party design. 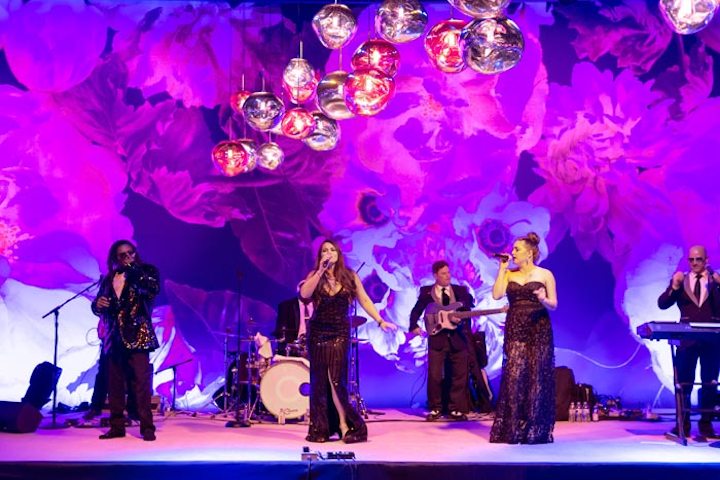 Local band the Cheeseballs performed against a floral backdrop. 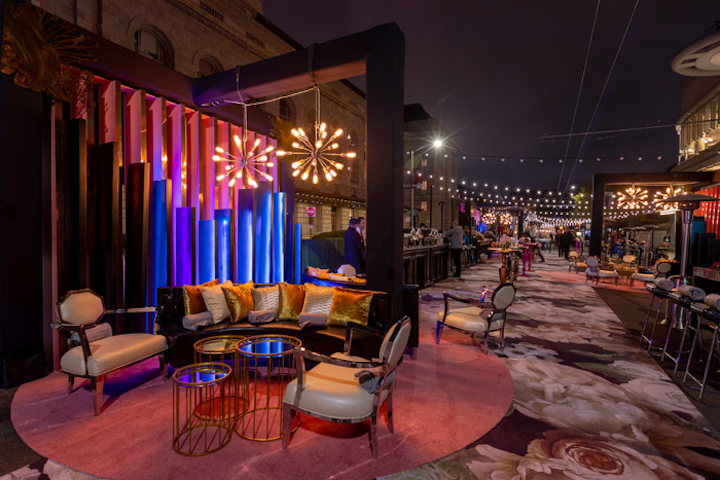 During the 90-minute window, workers—including more than 100 staffers from Blueprint alone—also transformed the outdoor area that had previously held the event's entrance area. A long printed carpet recalled the floral backdrops inside the tent, and vignettes featured plush lounge furniture. Blankets and heaters were used to keep guests warm. 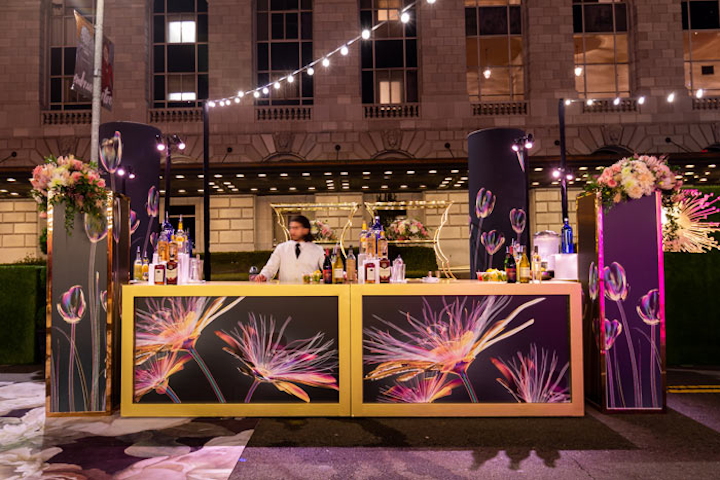 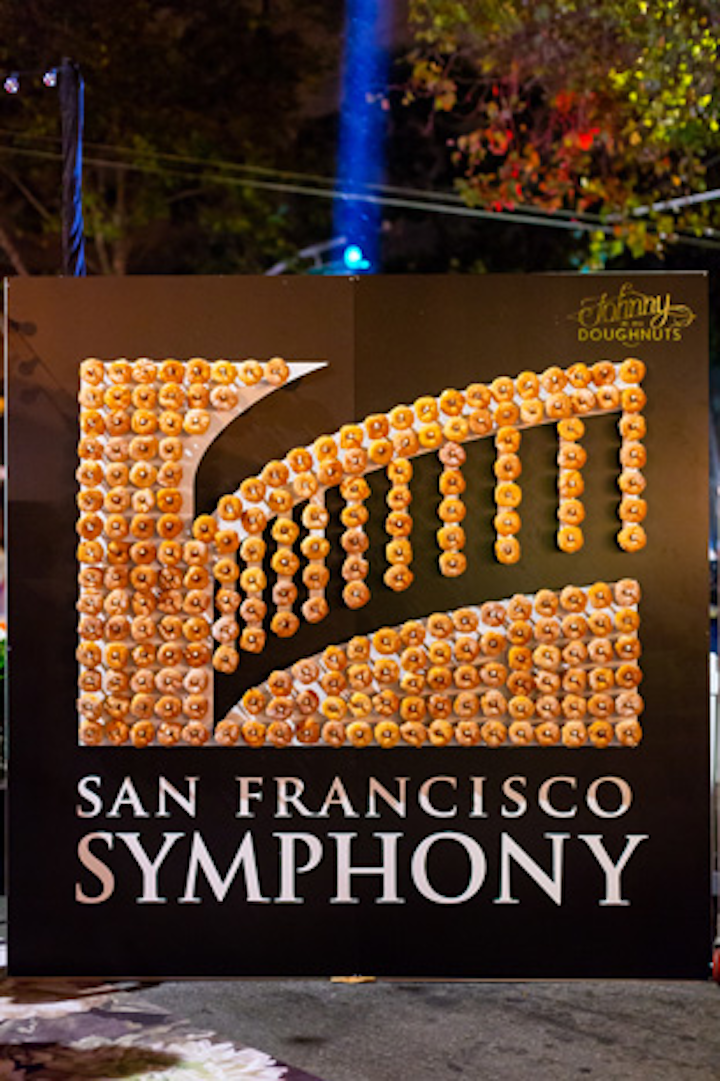 In a fun touch, a wall of doughnuts created the shape of the symphony’s logo. 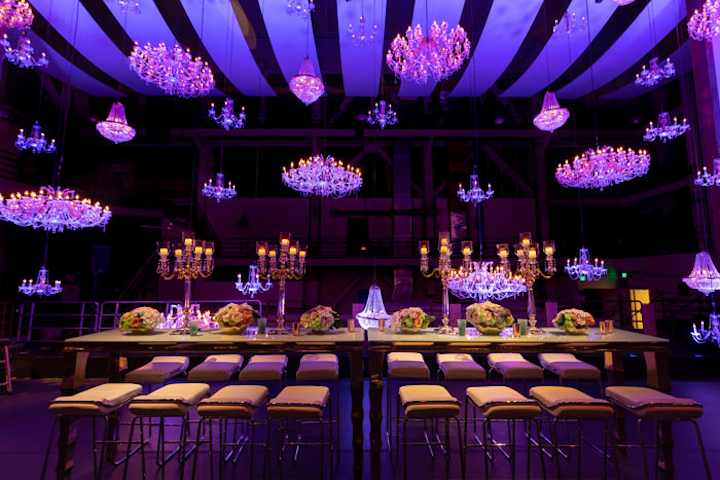 The evening featured a total of nine events, including cocktail receptions and additional dinners. A reception at Zellerbach Hall was illuminated with 48 crystal chandeliers. 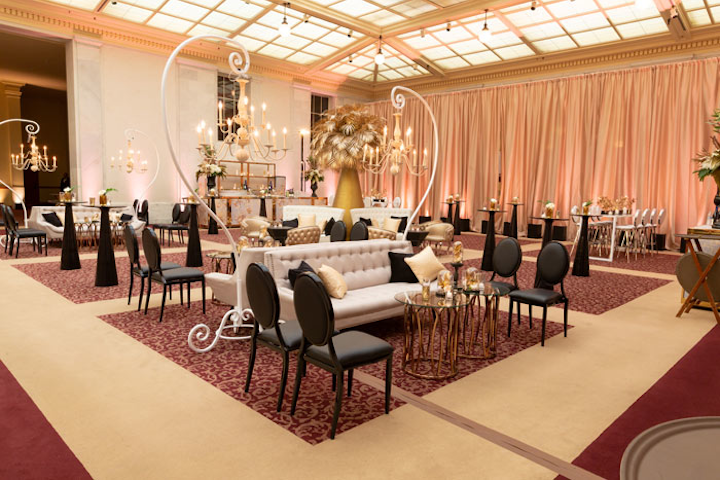 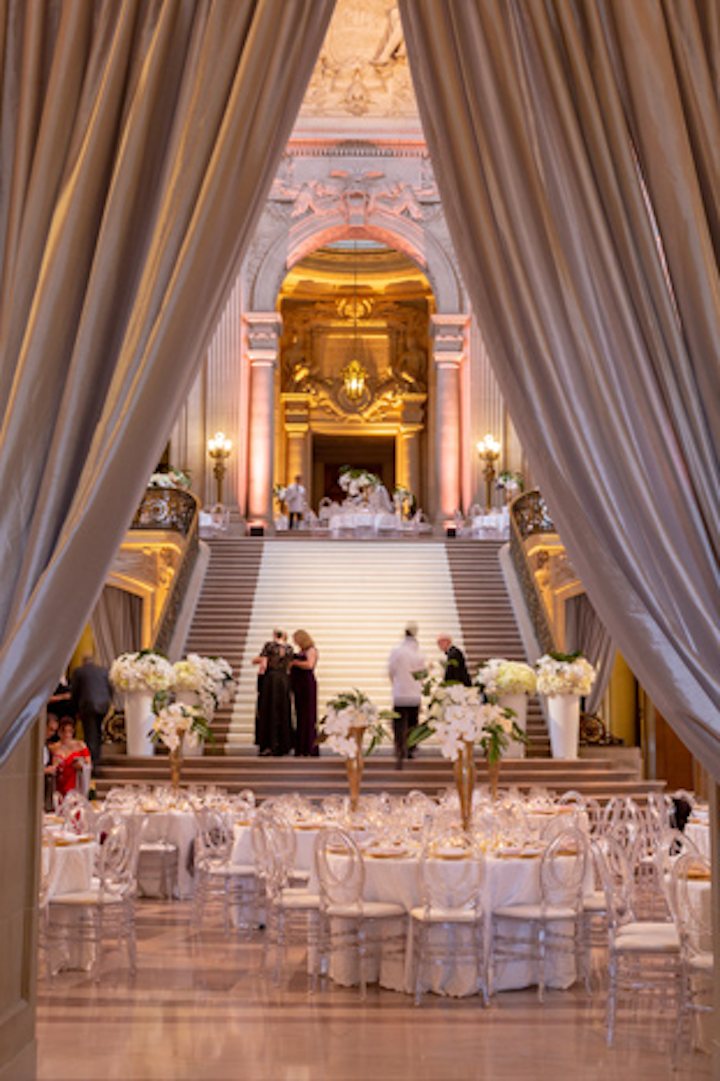 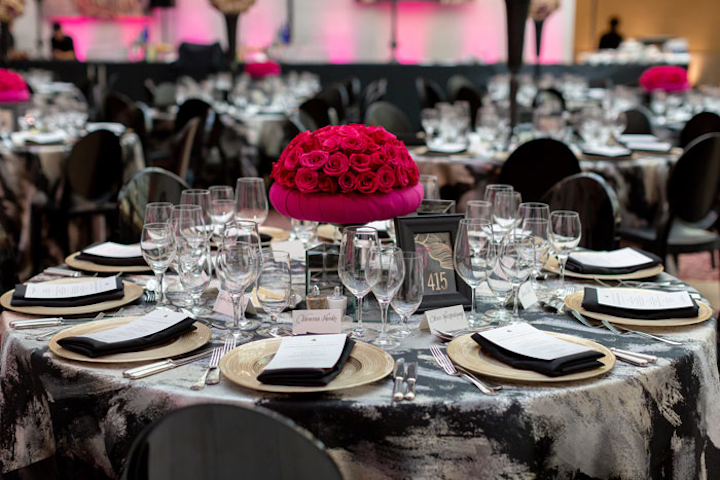 Another dinner, held at North Light Court at City Hall, had a black, white, and gold color scheme with red and burgundy florals. 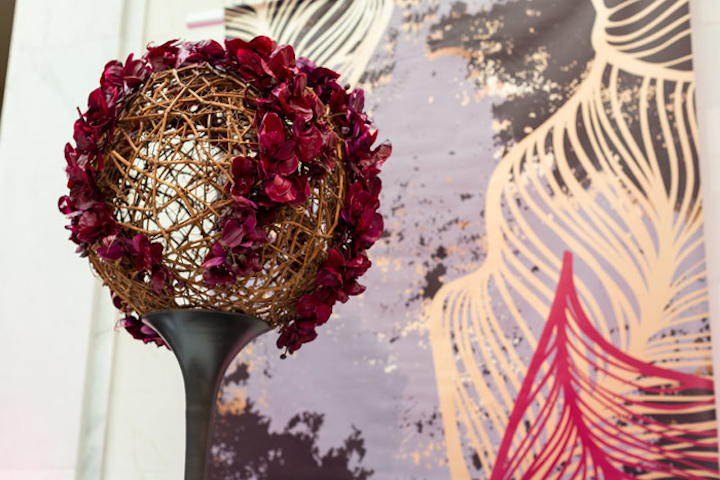 Centerpieces included tall round arrangements made with branches and flowers.