The digital media company looked to top last year's effort by presenting its lineup of new original programming at a Brooklyn waterfront venue with a "Connected" theme that linked the location, messaging, and design.

Tim Armstrong, C.E.O. and chairman of AOL Inc., introduced the digital media company's 2014 NewFront presentation on Tuesday, April 29 by directing a question to the elephant in the room: "Why are we in Brooklyn?"

Nearly 1,700 people trekked to Duggal Greenhouse at the Brooklyn Navy Yard for the unveiling of AOL's latest lineup of video content. Just as the Brooklyn Bridge became the world's longest suspension bridge when it opened in 1883, Armstrong positioned AOL as a connector between the digital and TV realms offering 16 original shows—which he announced will be rated by Nielsen alongside traditional broadcast programming.

But AOL also needed a venue that would top its 2013 NewFront at Skylight at Moynihan Station while accommodating an even larger guest list. (About 500 more people attended this year's event than in 2013.) "It was our goal to find a nontraditional theater space," Stacy Lambatos, director of corporate events, said of the building’s raw, open floor plan and high ceilings. "But it wasn't a venue that we could say, 'Hey, come find us on 9th and Broadway.' It was a big risk to ask people to come to Brooklyn." To help pull it off, AOL tapped Barkley Kalpak Agency to design and produce.

Most people traversed from Manhattan across the East River via ferries (organized by AOL), which offered the appeal of an in-transit bar. Less appealing was the rain that battered attendees waiting on the dock under AOL-branded umbrellas handed out by workers wearing "How may I connect you?" T-shirts.

As the evening's central theme, "Connected" appeared throughout the event, most notably on the two 120-foot-long screens that enclosed a stage in the round. A concentric-circle bar featured varying sizes of tablet and smartphone screens—protected under glass—that displayed different platforms for connecting with AOL's video content. And guests had the opportunity to snag their own "Connected" tees by choosing from an assortment of screen-printed graphics that played with two dots and a line—also riffed on by a giant, radial chandelier over the bar.

One reliable way of getting people to feel connected to an event (or at least getting them to connect on social media) is with celebrity appearances. Among the speakers highlighting their AOL shows during the presentation were Zoe Saldana, Bode Miller, Portia de Rossi, and Nicole Richie. Sarah Jessica Parker best summarized the evening's message of bridging the digital and TV mediums: "Good content is good content," she said, "regardless of the screen you watch it on." 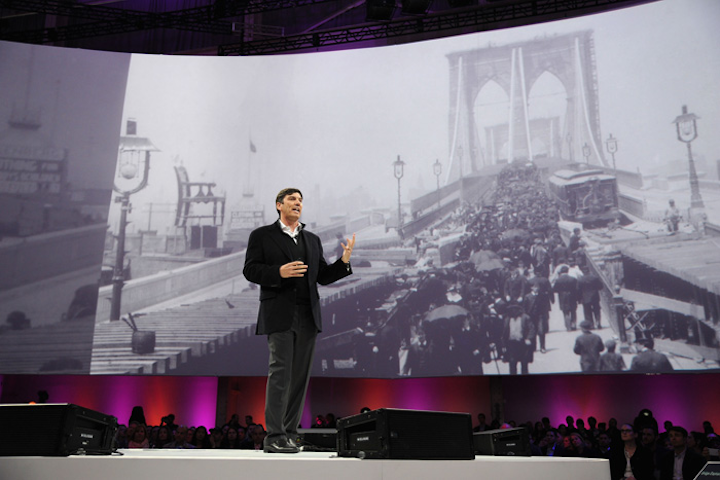 AOL chairman and C.E.O. Tim Armstrong made a point to address the location and used the Brooklyn Bridge as a metaphor for how the media company is the connector between digital and televised content.
Photo: Bryan Bedder/Getty Images for AOL 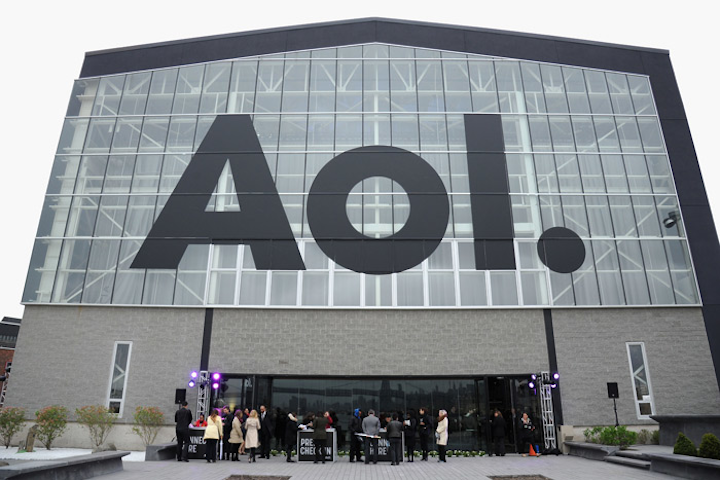 Looking to top last year's event in Manhattan, AOL hosted its 2014 NewFront at the Duggal Greenhouse, a 35,000-square-foot space in the Brooklyn Navy Yard. The event's planners and producers paid a lot of attention to the transportation logistics, organizing ferries and providing staffers to guide guests from the dock to the venue.
Photo: Bryan Bedder/Getty Images for AOL 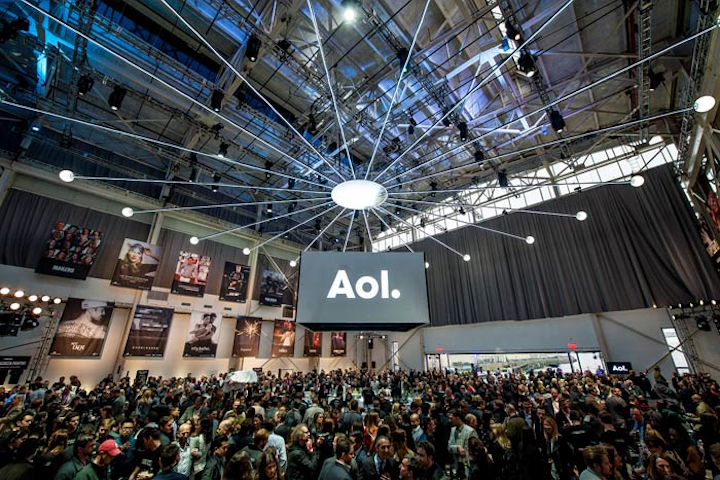 Inside the space, the NewFront's planning and production team customized the space with hanging banners and a chandelier that measured more than 100 feet in diameter.
Photo: Chris Pearce 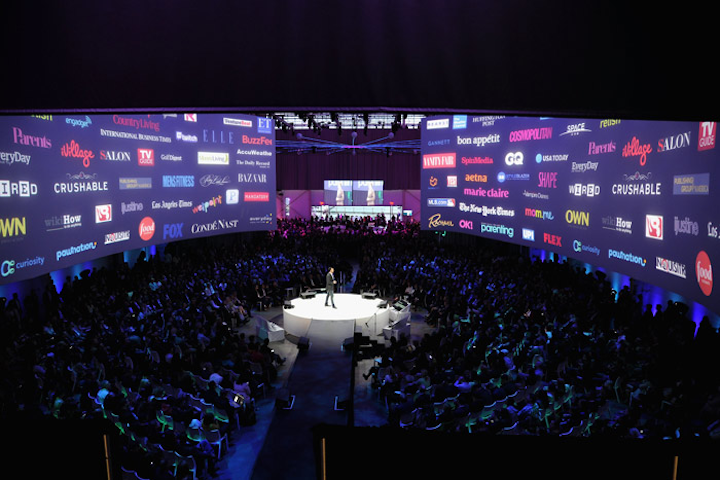 To accommodate the larger guest list and create an immersive concept for the presentation, the producers built a theater-in-the-round, with a relatively small stage in the center. Two curvilinear screens—each 120 feet long and 30 feet tall—hung overheard, offering an almost 360-degree view of the content displayed.
Photo: Bryan Bedder/Getty Images for AOL 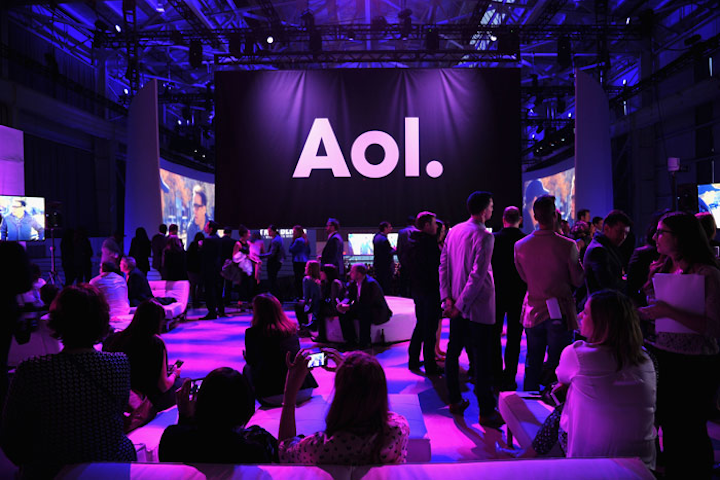 The venue's mezzanine was turned into a V.I.P. lounge, and producers made sure the content shown on the screens was visible from the elevated space.
Photo: Bryan Bedder/Getty Images for AOL

The relatively simple stage and seating setup was designed to make the screens and content displayed the focal point of the presentation.
Photo: Chris Pearce 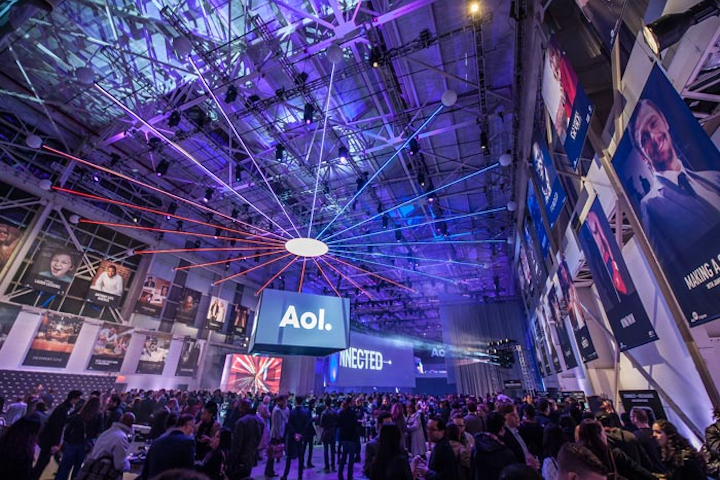 When the presentation finished, the audience of nearly 1,700 media buyers, ad executives, and press remained in the venue for the after-party. The chandelier's LED strips changed color, matching the hues of the lighting.
Photo: Chris Pearce 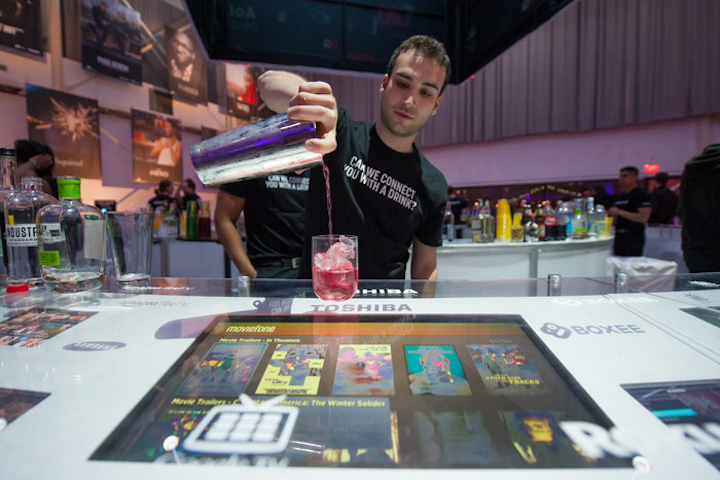 The biggest visual of the after-party was the bar, a piece that measured 30 feet in diameter and was embedded with more than 100 devices streaming content.
Photo: Chris Pearce 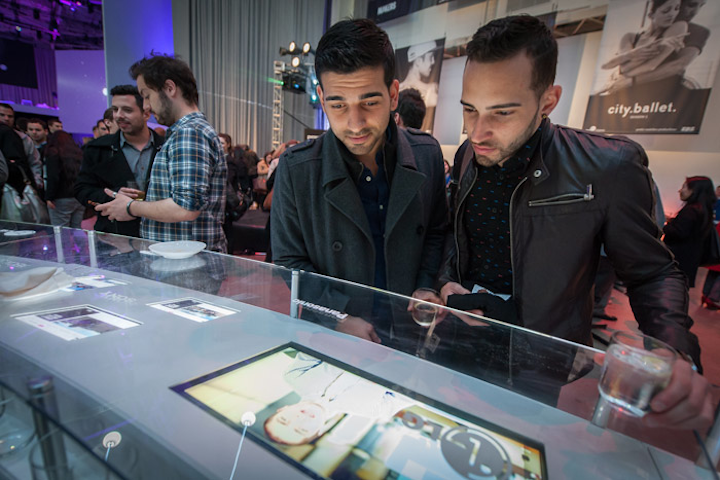 The bar's concept was designed to match AOL's messaging for the evening—that its content can be accessed on any device at any time.
Photo: Chris Pearce 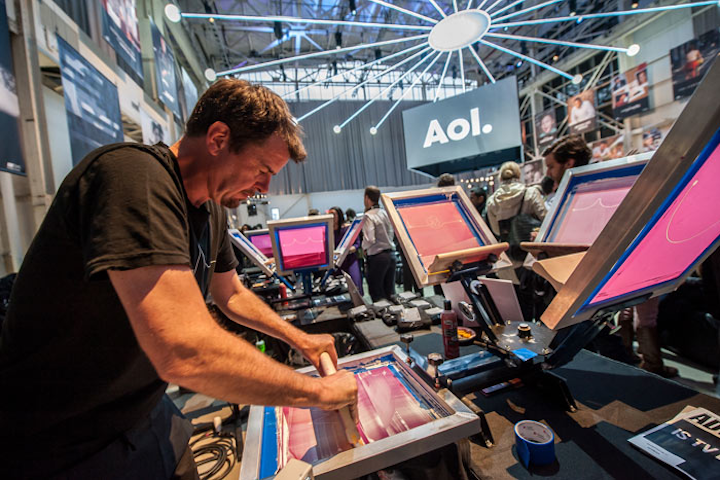 Even the T-shirts screen printed on site matched the night's theme of "Connected."
Photo: Chris Pearce 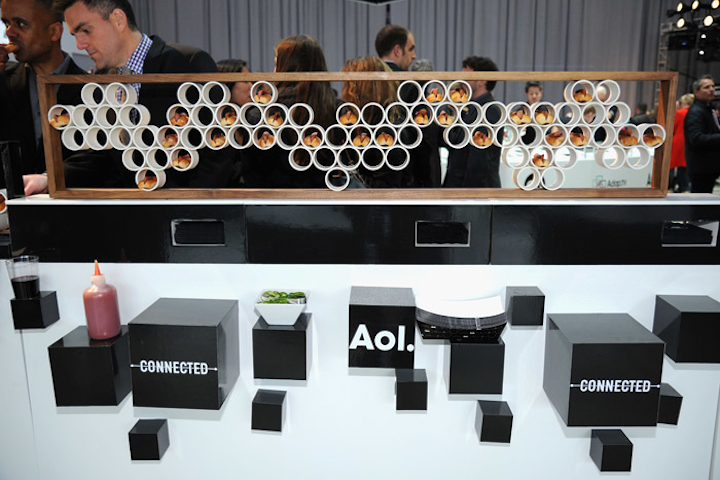 The theme was also displayed alongside the food, catered by Pinch Food Design.
Photo: Bryan Bedder/Getty Images for AOL
More in Programming & Entertainment