The Hamilton Hotel worked with the cable network to design the Presidential Veep Suite and Oval Office, then celebrated with a screening party ahead of the season premiere. 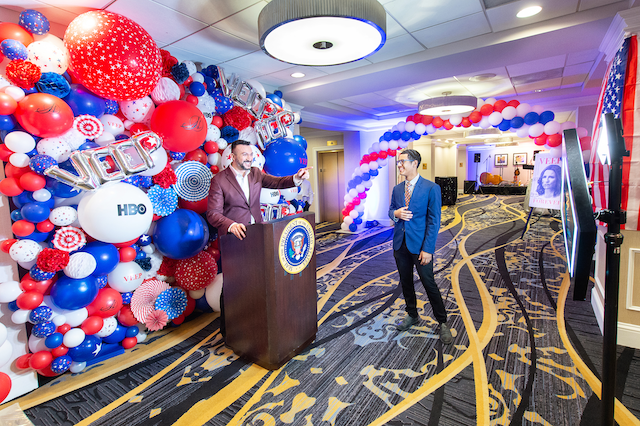 Guests posed in front of a presidential podium with a Veep balloon wall for animated photos they could post on social media. The photos emailed to guests featured Veep and Hamilton Hotel branding.Photo: Courtesy of Hamilton HotelWASHINGTON—Presidential candidates are still jumping into the 2020 race, but one campaign was in full swing last week at the Hamilton Hotel Washington, D.C. That would be Selina Meyer, the dysfunctional fictional politician at the heart of HBO's Emmy award-winning comedy Veep. The show is airing its final season, but it will live on at the K Street hotel, which unveiled a guest suite and lounge decorated with props straight from the show's Los Angeles set. The hotel, which is currently undergoing a multimillion-dollar transformation, collaborated with HBO to design the "Presidential Veep Suite and Oval Office."

In advance of the show's premiere on Sunday, the Hamilton Hotel threw a party on March 27 for 150 guests to debut its replica of President Selina Meyer’s Oval Office on the 12th floor lobby. That includes a Presidential Resolute Desk, presidential portrait of Meyer, and fun decor like a throw pillow with Meyer's face on Mount Rushmore. Hotel guests can book the one-bedroom “Selina Meyer Presidential Suite,” which is meant to resemble her brownstone residence on the show with props like a writing table, a bar cabinet, family photos, and more momentos that superfans of the show might recognize. Terri Jannes Interiors designed the suite and Oval Office using original Veep pieces from HBO.

“With Veep coming to a close this season we were looking at ways to celebrate Selina Meyer, and a presidential suite seemed like such a perfect way to salute her legacy,” Yauny Wheaton, director of consumer marketing at HBO, said in a press release. “We’ve had a wonderful time working with the show’s production designers and the Hamilton Hotel to create a unique in-world experience that we think fans will love for years to come.”

Before a screening of the first two episodes, Bialek's Music's Sweet Yonder all-female bluegrass band performed while guests took gif photos emblazoned with the hotel's branding in front of a presidential step-and-repeat from Booth-o-Rama. Afterward, party guests snapped photos in the suite and Oval Office, sampled a patriotic spread of desserts, and took home Veep tote bags that included a copy of Selina Meyer’s autobiography, A Woman First: First Woman. 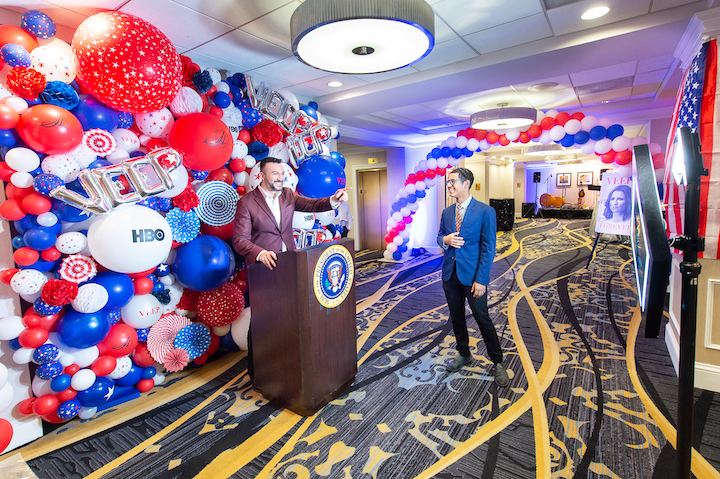 Guests posed in front of a presidential podium with a Veep balloon wall for animated photos they could post on social media. The photos emailed to guests featured Veep and Hamilton Hotel branding.
Photo: Courtesy of Hamilton Hotel 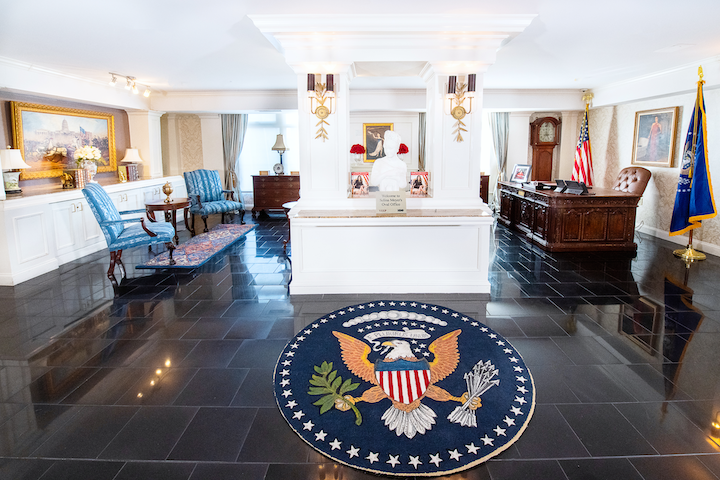 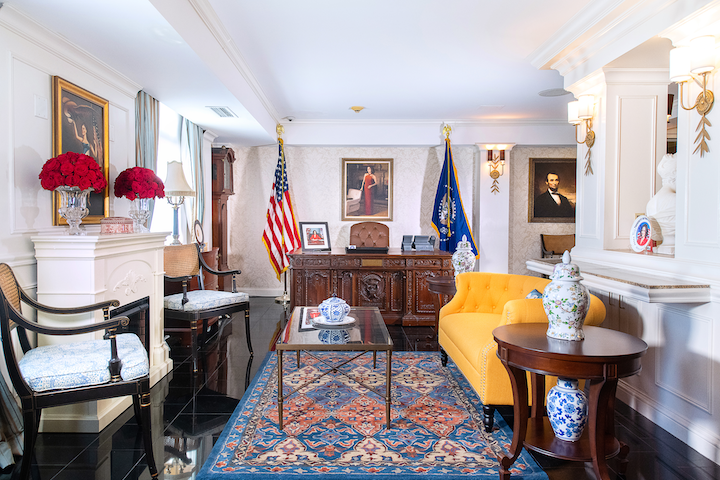 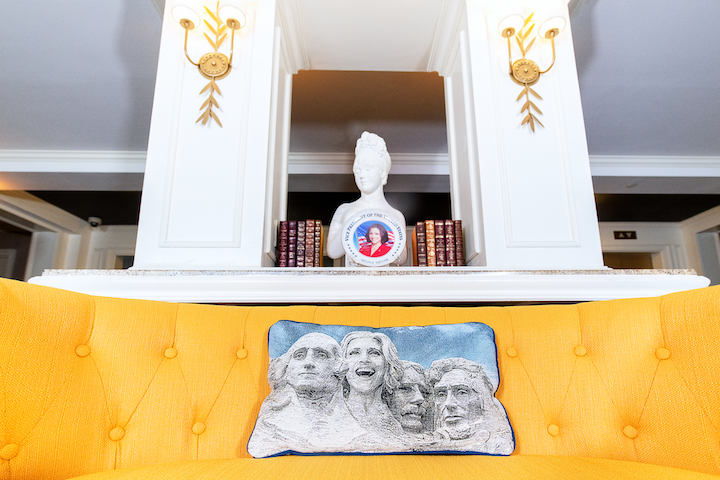 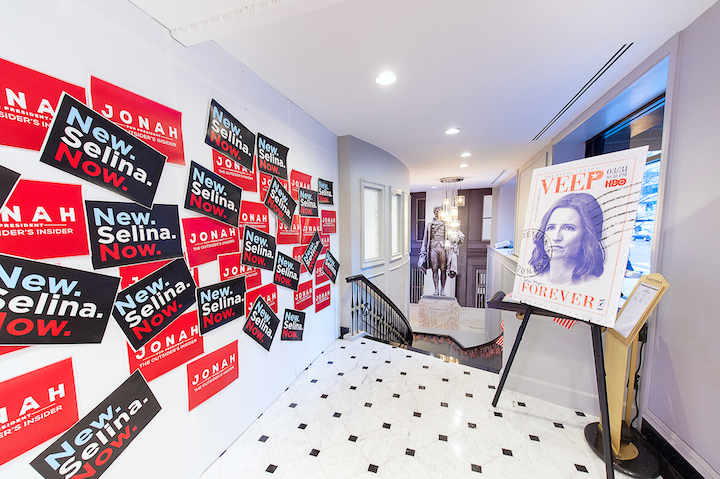 Campaign posters with themes from the final season of Veep set the tone for the entrance to the party, along with an oversize Selina Meyer presidential stamp.
Photo: Courtesy of Hamilton Hotel 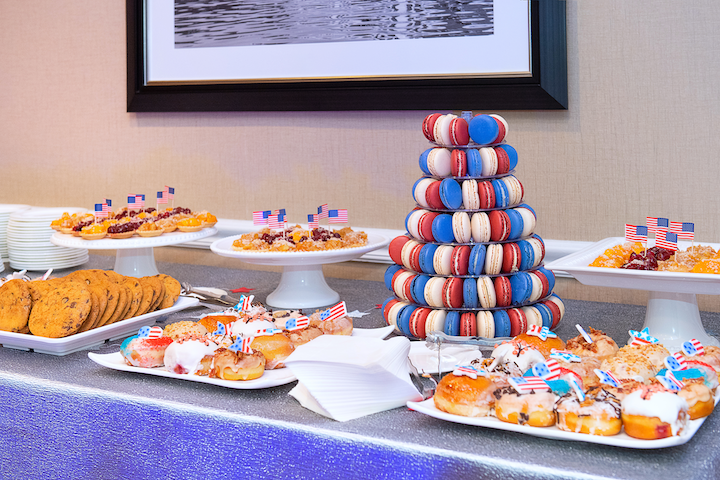 To go with the screening's "over-the-top Americana" theme, a dessert buffet included a red, white, and blue macaron tower, mini pies topped with American flags, chocolate chip cookies, and a selection of mini-doughnuts that Astro Doughnut had developed for the recent election season.
Photo: Courtesy of Hamilton Hotel
More in Programming & Entertainment