The Recording Academy's Branden Chapman always says planning the Grammy Celebration official after-party for 5,000 guests begins immediately after the previous year's party wraps. And for this year's event at the Los Angeles Convention Center on Sunday night, that sentiment couldn't have been more literal. The party's theme was "A Night at Studio 54," a nod to the Grammys' 54th year, which began right after Sunday night's 53rd annual award show at Staples. The academy's Chapman, Rex Supa, and Clay Upton were the event's executive producers, and Along Came Mary Productions, helmed by longtime collaborator Mary Micucci, once again produced it.

"Every year it's a bit of a challenge to come up with a new theme tied to music," Chapman said. "Not only is disco such a dynamic era, but there's so much to pull from musically, with visuals as well, so we thought it would be a good way to lead into our 54th year, on the downbeat of our 53rd Grammys."

Along Came Mary drew upon influences taken from '70s pop culture and the emergence of disco for the look and feel of the cavernous convention center space, the size of three football fields. "I screamed with joy when [Chapman] said this year was going to be a night at Studio 54," said Micucci, who called the theme her favorite ever. Beanbags, Twister games, roller skaters, and tiered stages filled the room, where there were about 100 performers in all. A high-def circular video projection screen from ShowPro was among the centerpieces of the space, and projected imagery including live magnified video feeds of the entertainment and live shots of the crowd, as well as a rotating disco ball. (ShowPro provided close to 1,000 lighting instruments, maybe of which were LEDs—so this year had a larger fixture count but the lowest power consumption ever.)

Decor standouts for Micucci included the clusters of different-shaped mirror balls including a massive glitter ball that was used as an aerialist prop, and a laser light show that used a high-intensity blue. For Chapman, it was the 30- by 30-foot dance floor—evocative of Saturday Night Fever, natch. "It's such an iconic image from [that movie]," he said. Micucci added, "The dance floor should have probably taken up a whole room because everyone was dancing. You couldn't miss it." Providing further dance floor fodder were co-headliners Keri Hilson and the Roots, plus DJ Wayne G. Additionally, members of the Jazz at Lincoln Center Orchestra and the Grammy Jazz Ensembles performed in the MasterCard Jazz Lounge.

Adding to the logistical feat of installing the massive event this year was the NBA All-Star festivities, sharing the same real estate for its Los Angeles visit, which necessitated some timeline changes. The party generally has about a weeklong load-in, but this year the Along Came Mary team had to move out of about 26,000 square feet, or about a quarter of the total event space, for two and a half days: An NBA All-Star event took over the concourse, where the Grammy organization's MusiCares had been holding its auction, so that event had to move into the Grammy Celebration space. 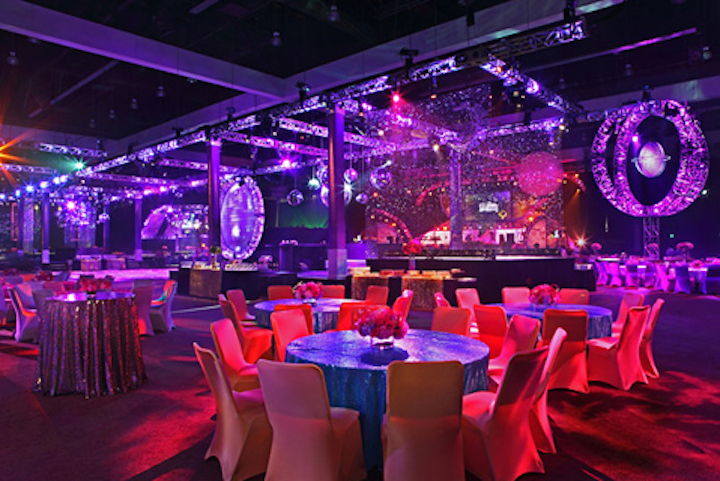 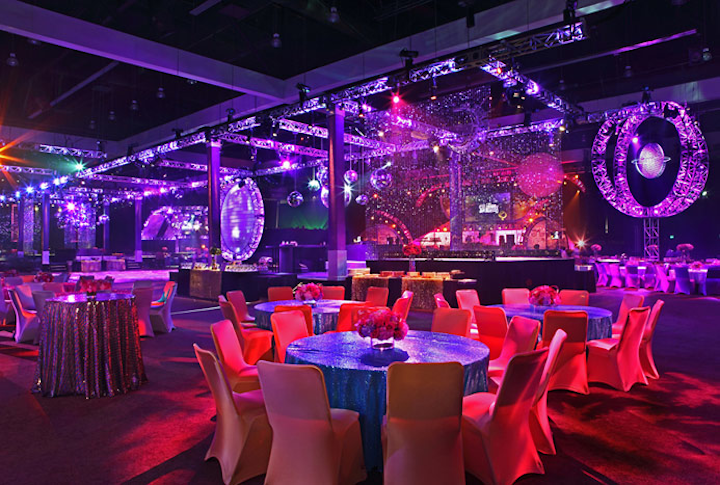 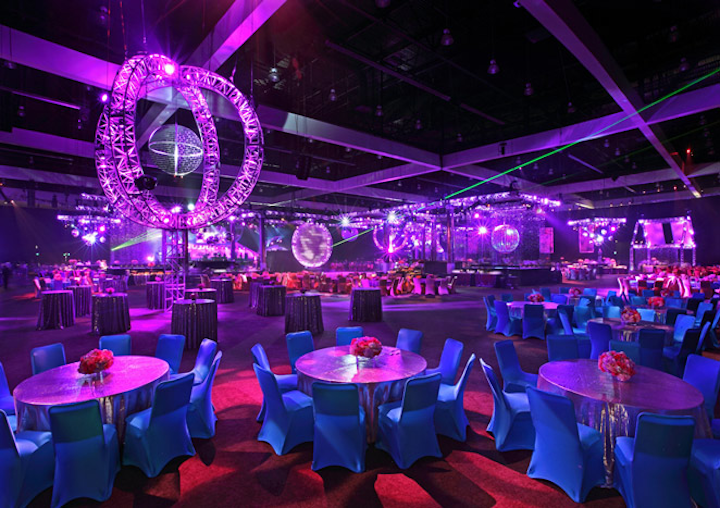 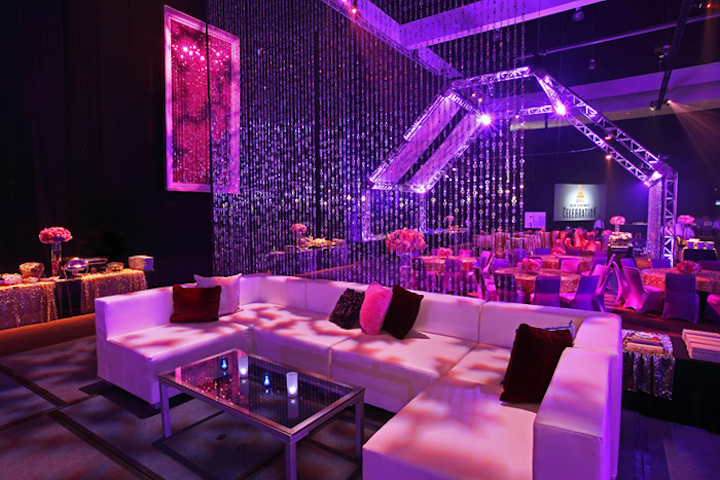 Curtains made from reflective beads added a vintage touch, and lots of sparkle.
Photo: The Recording Academy®/photo by Line 8 Photography (c) 2011 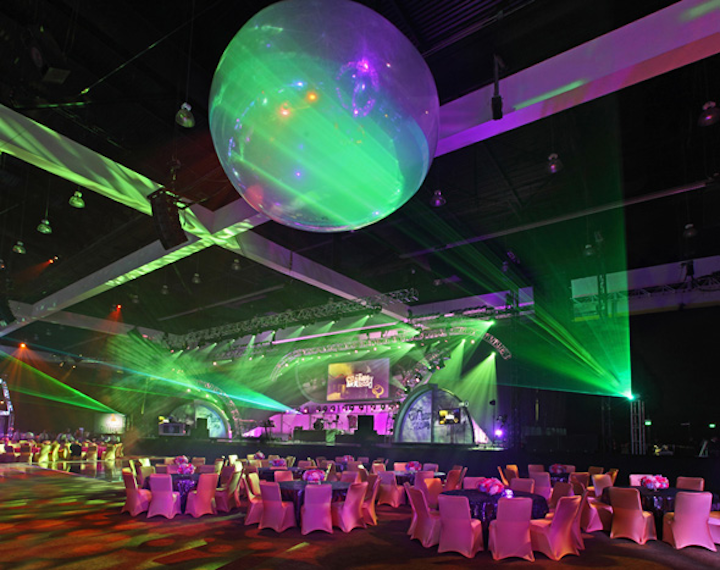 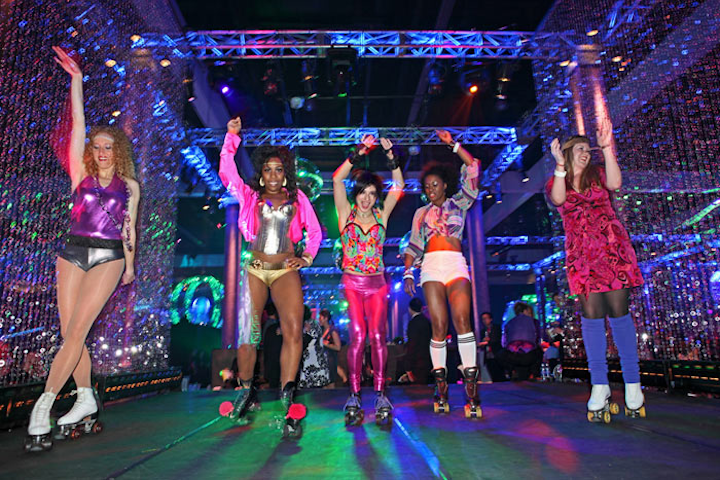 Roller skaters in the party space added a bit of whimsy and nostalgia.
Photo: The Recording Academy®/photo by Line 8 Photography (c) 2011 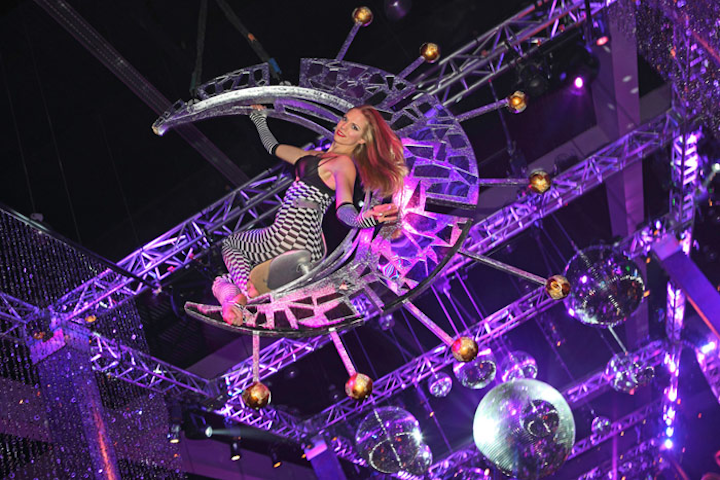 Aerialists performed for the crowd.
Photo: The Recording Academy®/photo by Line 8 Photography (c) 2011 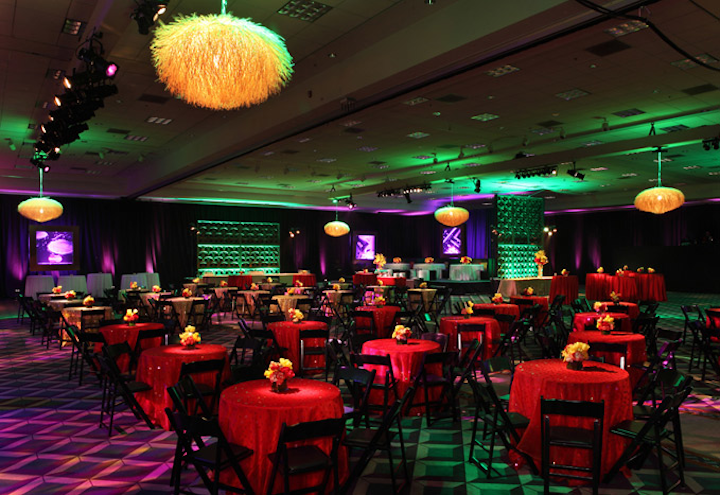