To celebrate the global launch of its flagship L.12.12 fragrance, its first-ever scent collection for men, Lacoste harkened back to founder René Lacoste's roots as an inventor, with a multifaceted approach that tapped into such realms as dance, color, virtual technology, and even a live art installation.

Developed by Glow Design Group—the New York-based event design and production company that recently oversaw Jaguar's 50th anniversary party for its E-type car at the IAC Building—the event on Monday at Grand Central Terminal's Vanderbilt Hall kicked off with a performance for 300 guests by the Gallim Dance Company, alongside Lacoste fans the brand brought in using its Facebook page. And following remarks from Lacoste Fragrances executive Antoine Delagrange and a second dance performance that featured music by Grandmaster Flash and the Furious Five, The Social Network actor Max Minghella—whose connection was no coincidence, given the affair's emphasis on social media—delivered the kabuki drop reveal of live sculpture "La Machine L.12.12."

"Today was all about timing compounded by very strict rules about where things can be placed," said Glow Design Group principal Craig Robillard. His team of 50 workers were given very specific time frames for the build-out—midnight to 5 a.m., then starting again at 5 p.m.—to keep the public passage between the east and west sides of the hall open to pedestrian traffic. In addition to the standard permits necessary for a launch of this scale, Robillard noted the extra level of approvals, from the fire marshal and the N.Y.P.D. to the Metro North police and the terminal's landlord.

Initial conversations between Robillard and Lacoste started in May. “Lacoste said they had an installation in the works and wanted us to design and stage a big opening night party and dramatic reveal of the space,” Robillard said. The resulting kabuki drop was something his company was familiar with, having done a fair share of them in the past, including once covering an entire 747 at Newark Airport with a 60- by 170-foot drape.

The virtual and mechanical art installation, built by Tronic and measuring about 50 by 28 feet, is powered by the collaboration of Lacoste’s nearly 6.5 million Facebook fans. The fragrance trio speaks directly to the iconic Lacoste polo, the L.12.12, translated into three scents. "La Machine 12.12," meanwhile, represents the convergence of a traditional art form with a social media platform, where 35,000 social media fans will generate the content that appears on the sculpture.

The device was fully designed digitally, using Standard Robot and Smart Architecture technology. According to Jesse Seppi, co-founder and director of Tronic, the installation was constructed from about 70 hexagonal-shaped high-density foam modular panels, while the individual monitors were assembled to form a vast “living skin” to resemble—you guessed it—the scaly texture of a crocodile, the brand's signature logo. The concept behind "La Machine L.12.12" is to visualize the transformation of the iconic shirt into a fragrance bottle every 20 seconds using advanced logarithms. Mechanically, the shirt is consumed by contraption and on the virtual side, animated video sequences generated by Lacoste social media fans splash across the surface. At the end of this digital interaction, a physical fragrance bottle appears from "La Machine," completing the cycle of metamorphosis.

According to Olivier Bamberger, North America regional director at Lacoste S.A., it was all about establishing and reinforcing a digital connection between the Lacoste fragrance and the Lacoste polo. “I wanted [a venue with] maximum traffic because it’s staying up for nine days,” said Bamberger, who initially threw around such venues as the New Museum and the Museum of Modern Art. “In the end, Grand Central Terminal was the ideal setting. The architecture here balances the modernity [of the fragrance and the brand] nicely.”

While no concrete plans have been set, Lacoste’s Bamberger did hint at the notion that "La Machine L.12.12" may embark on a global trip to various cities, as the contraption can be broken down into about 12 compact pieces. In the meantime, the installation will be exhibited at Grand Central Terminal through September 27. 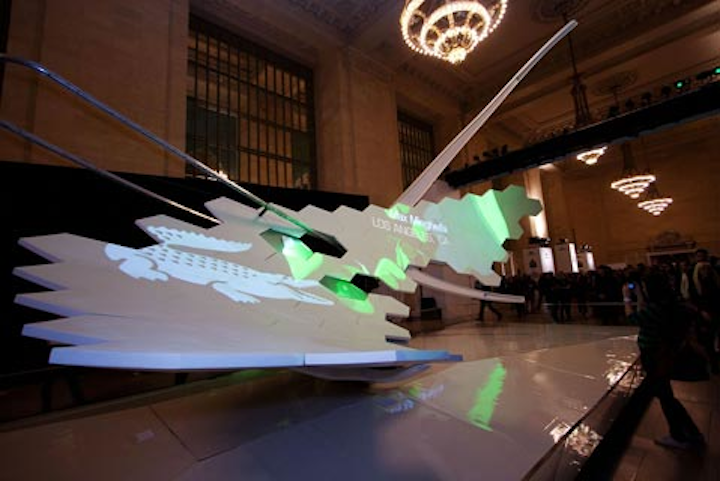 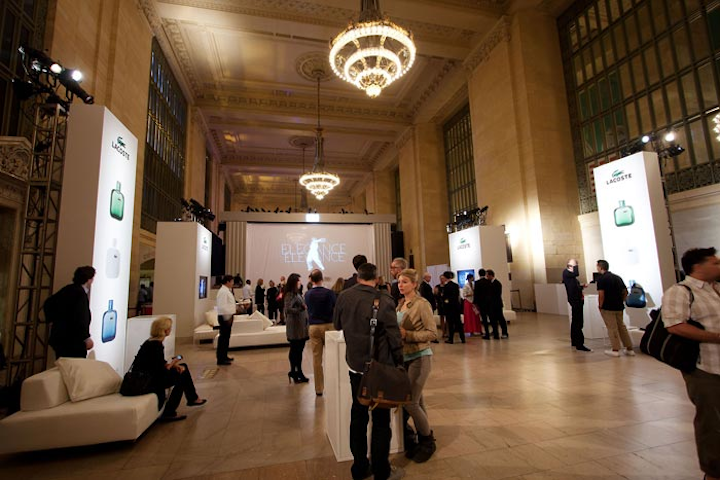 Inside Grand Central Terminal's Vanderbilt Hall on Monday, Lacoste set up a space to house 300 guests for the launch of its Eau de Lacoste L.12.12 fragrance and "La Machine L.12.12" installation. Stark white furniture complemented the clean contemporary look of the event and matched the brand's overarching aesthetic. While the setup was fairly straightforward, the video system was a bit more complex: The entire event was streamed live via a three-camera setup with a single operator on a tripod-mounted camera and two robotic cameras placed overhead and to the side. “We kept the lighting simple. The idea of the brand has very clean, crisp lines, so we put all our energies into the scenic fabrication and did very clean lighting on that,” said Glow Design Group principal Craig Robillard.
Photo: Keith Sirchio for BizBash 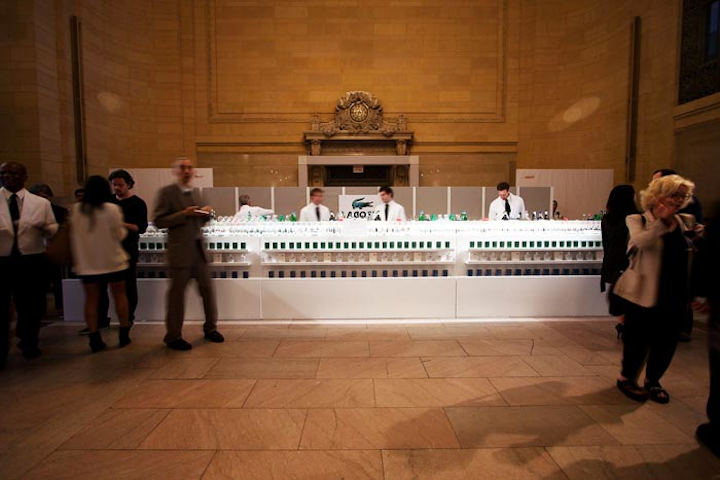 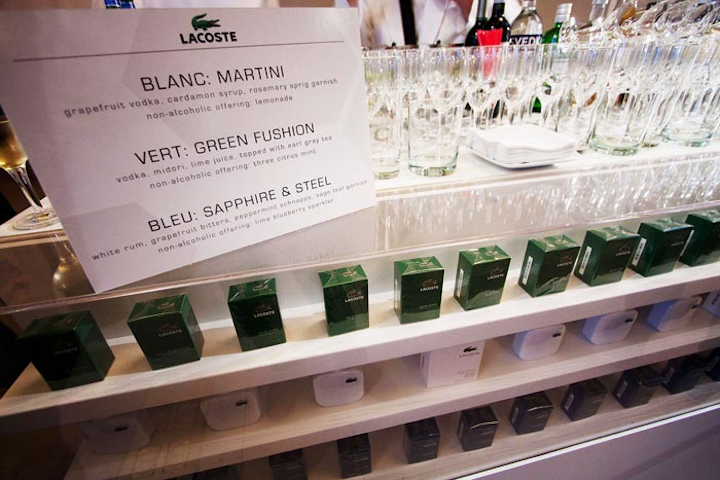 Abigail Kirsch served a selection of drinks designed to match the colors of the fragrance bottles.
Photo: Keith Sirchio for BizBash 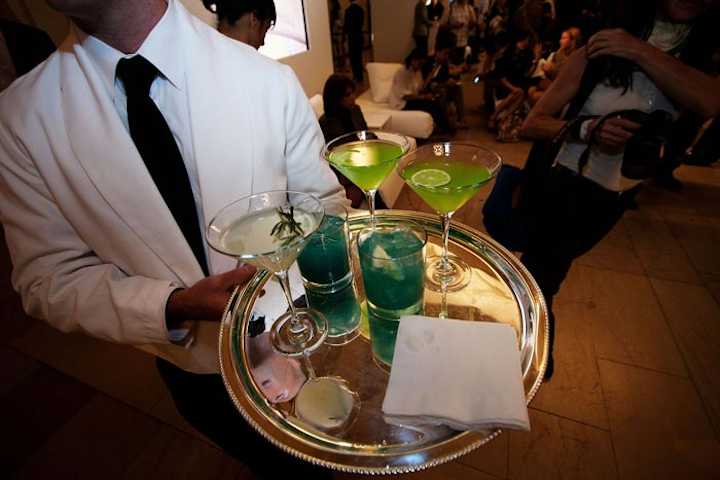 For every color, Abigail Kirsch offered two options, an alcoholic cocktail and a nonalcoholic beverage. For example, under the blue category, an alcoholic option featured a mix of white rum, grapefruit bitters, peppermint schnapps, and sage leaf garnish, while the nonalcoholic offering was a lime blueberry sparkler.
Photo: Keith Sirchio for BizBash 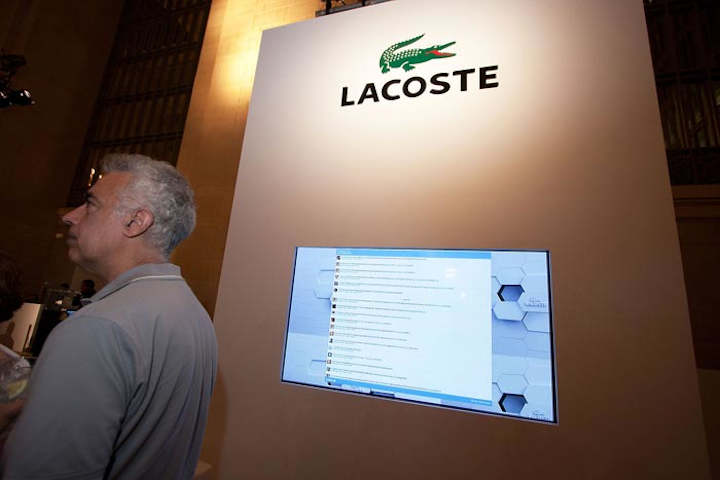 Columns surrounding the space featured the fragrance branding and built-in flat-screens for the ad copy loop, live video from the event's aerial cameras, and the feed from Lacoste's Twitter account.
Photo: Keith Sirchio for BizBash 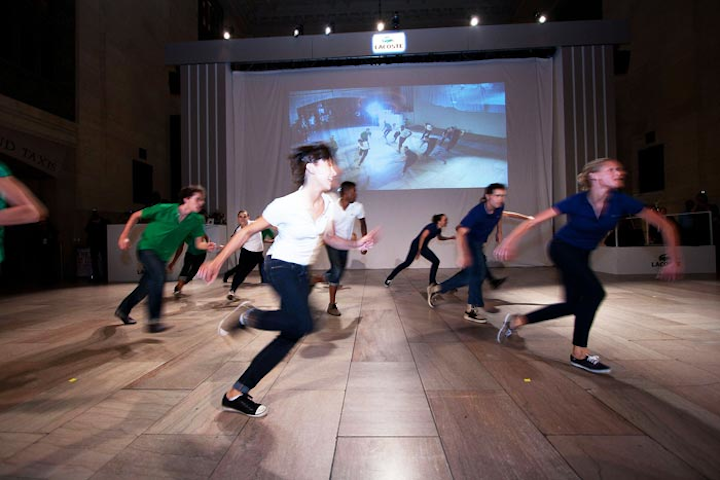 To open the festivities, Lacoste brought in a flash mob of dancers from Gallim Dance Company and social media fans selected from auditions. The troupe wore the L.12.12 polos in white, green, and blue, the same colors as the bottles in the fragrance collection.
Photo: Keith Sirchio for BizBash 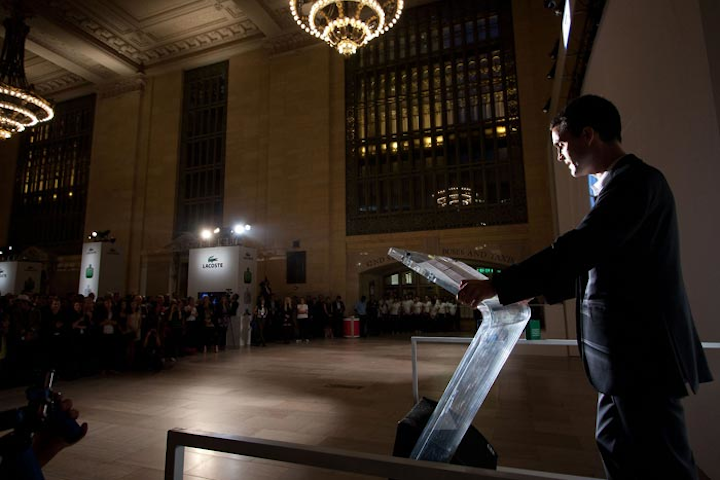 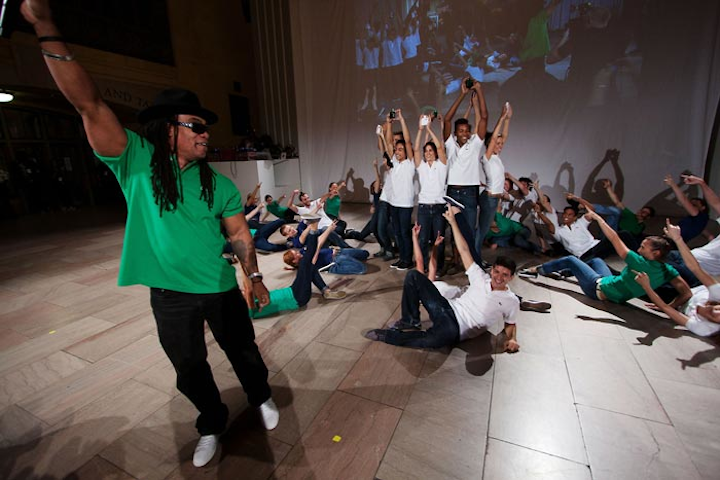 Delagrange was then followed by a second performance by the dance troupe, which was accompanied by the live musical stylings of Grandmaster Flash and the Furious Five.
Photo: Keith Sirchio for BizBash 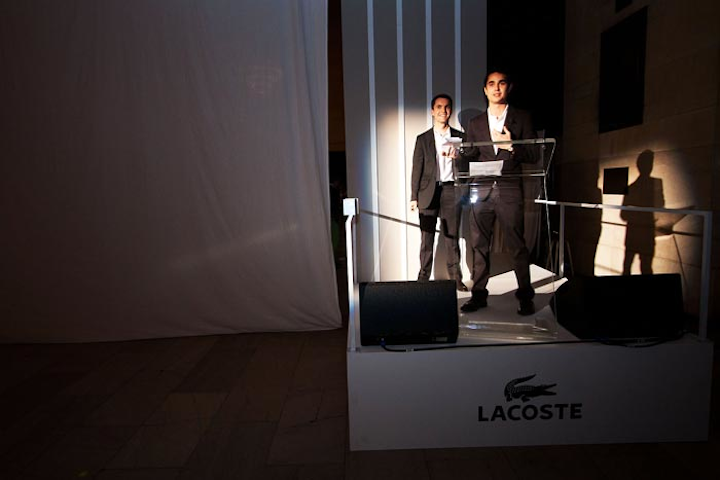 Surprise guest Max Minghella (pictured, right), an actor who starred in last fall's hit movie The Social Network, was brought in for the unveiling of La Machine L.12.12 and to speak about the social media component of the installation.
Photo: Keith Sirchio for BizBash 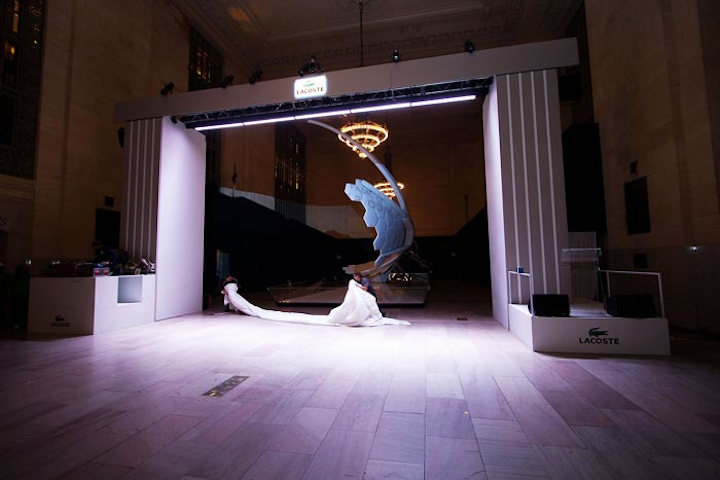 The contraption was kept hidden by a drape for the first portion of the event, only revealed once Lacoste gave the signal.
Photo: Keith Sirchio for BizBash 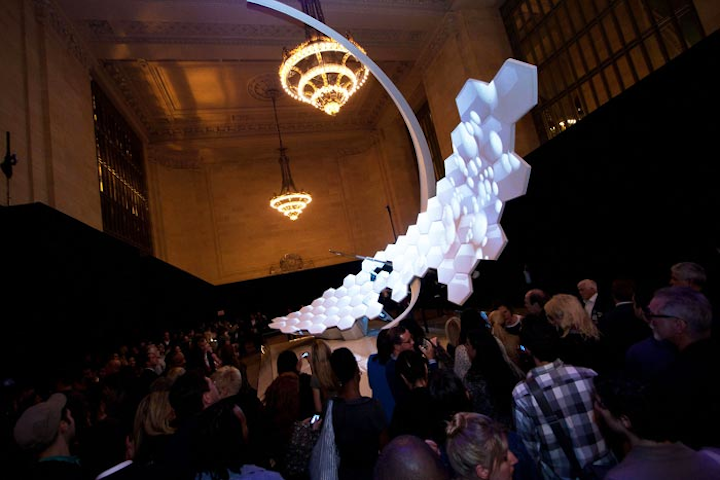 Comprised of about 70 hexagonal panels, the texture of La Machine L.12.12 is designed to imitate the skin of a crocodile, and its shape loosely resembles Lacoste's iconic logo.
Photo: Keith Sirchio for BizBash 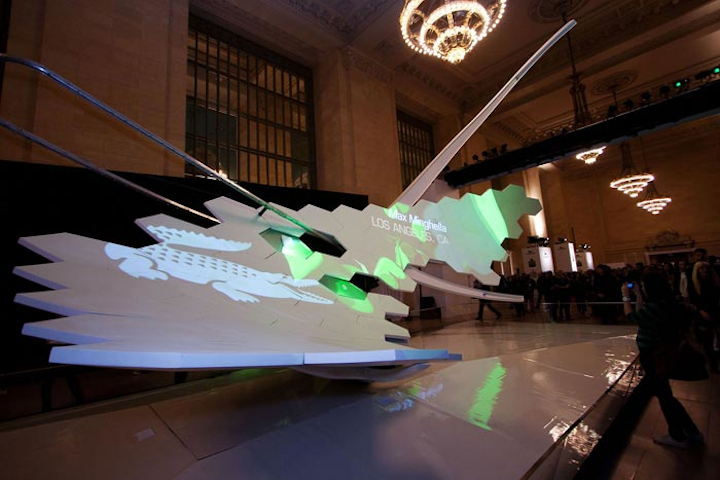 Online, Lacoste fans can create an avatar, pick background imagery, and choose a bottle and crocodile style, which is then turned into an animated video and splashed across the surface of the installation. The device itself hides and reveals the L.12.12 polo and fragrance bottle through mechanized panels, designed to represent the process of turning the shirt into the bottle.
Photo: Keith Sirchio for BizBash 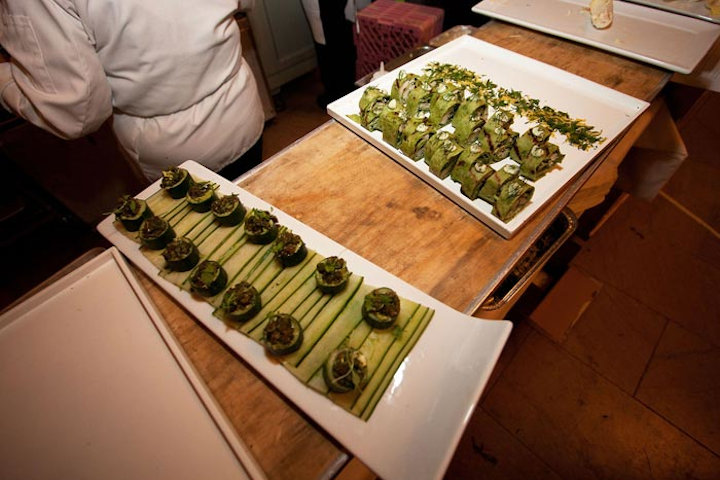 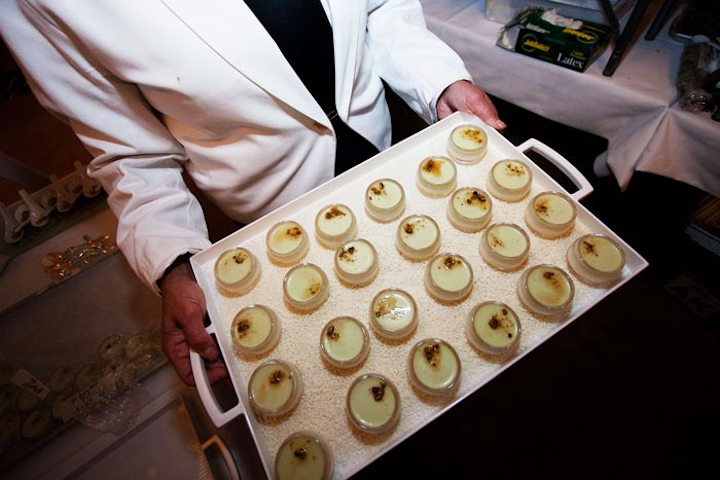 There was also plenty of white fare, including smoked chicken, celery root, apple, and fennel served on a endive with a white cranberry glaze; mahimahi ceviche presented in a jicama cup with ginger, yuzu, and Asian pears; and bergamot panna cotta with pistachios (pictured).
Photo: Keith Sirchio for BizBash 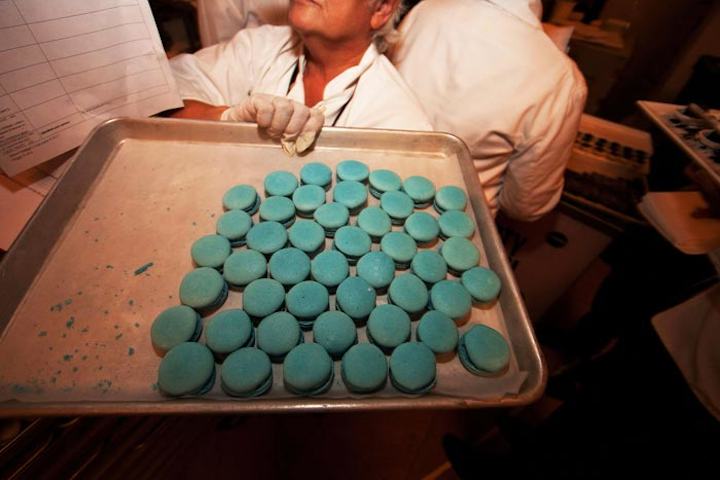 Among the desserts from Abigail Kirsch were blue macaroons.
Photo: Keith Sirchio for BizBash
More in Strategy