Utilizing Disney's vast resources, the world premiere party for the third installment of Pirates of the Caribbean was a giant-scale spectacle that doubled as a $3 million fund-raiser.

Alesandra Dubin
It may have been the debut of a huge summer movie, but it was no ordinary red-carpet photo op. Disney offered tickets for its May 19 world premiere of Pirates of the Caribbean: At World's End at Disneyland to the general public for $1,500 a pop—and put on a show big enough to (for some, at least) justify the cost. Bargain or no, the money went to the Make-A-Wish Foundation of America and Make-A-Wish International, and the event raised $3 million for the cause, with Disney chipping in more than $1 million and underwriting the event's full costs. The 1,200 tickets sold out in less than two weeks, with guests trekking in from all over the world.“One father from Chicago had his kids volunteer at a children’s hospital so they could appreciate their tickets more, and a doctor from Canada sent her mom as a surprise thank-you for putting her through medical school. It’s awesome,” said Disney senior vice president of worldwide special events Lylle Breier. (We met a kindergarten teacher from Alabama who brought her mom on the trip but promptly ditched the matron in line when she thought she spotted Johnny Depp up ahead.)


As with the premieres for the past two Pirates movies, Breier worked with a massive team from the studio and the theme park to bring together the meticulously scripted event, which began with guests, costumed entertainers, and celebrities all making their way down a snaking red carpet into the park. Instructions on their laminated tickets directed guests to specific restaurants for dinner (assignments were based on color-coded theater seating—a smart way to control crowds and maintain order). Each restaurant featured musical entertainment, as well as surprisingly elegant buffet spreads. More typical amusement-park fare like churros and cotton candy were also available at carts around the park.

As the sky grew dark, staffers closed the rides and activities (including stations where people could collect photos of themselves with stars by way of green-screen technology) to encourage guests into their seats at an outdoor theater, where a fleece blanket hung on the back of each chair for warmth against the nighttime chill. Norm Roper and his 12-piece Splash band, along with six dancers—all costumed in outfits from the movie—performed retro dance standards before the composer Hans Zimmer took the stage for a short performance from the score and actors paraded across the stage to thunderous applause from the crowd.

After the two-hour-45-minute film, the screening ended amid a symphony of well-timed fireworks, to music also specially composed by Zimmer. Guests were free to ride the attractions—including Pirates of the Caribbean, of course—until the park closed at 1 a.m.

“We were very lucky [to be working with] the most anticipated movie of the entire year,” Breier said. “What could be better than premiering the movie at the place it all started—Disneyland?” 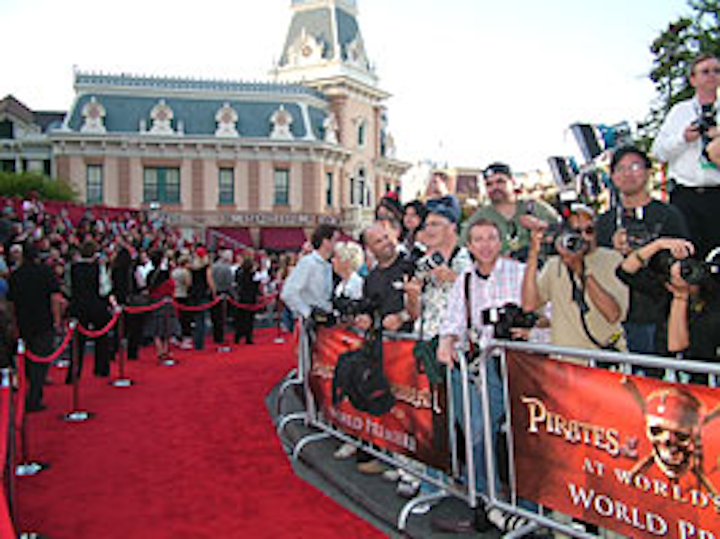 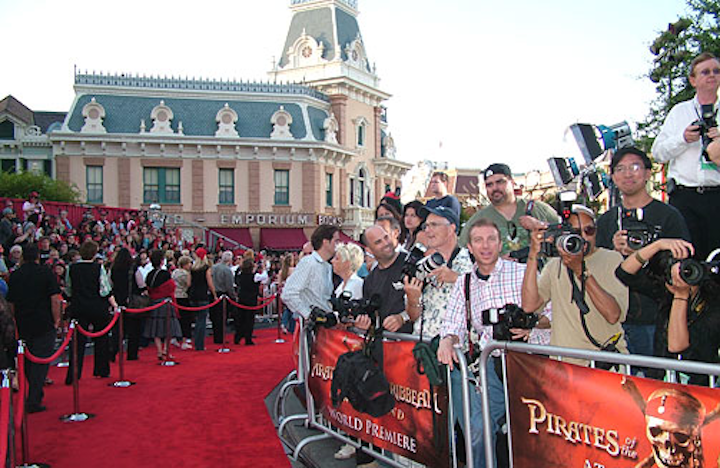 Hordes of press reps and fans flanked the red carpet, which snaked through the theme park.
Photo: BizBash 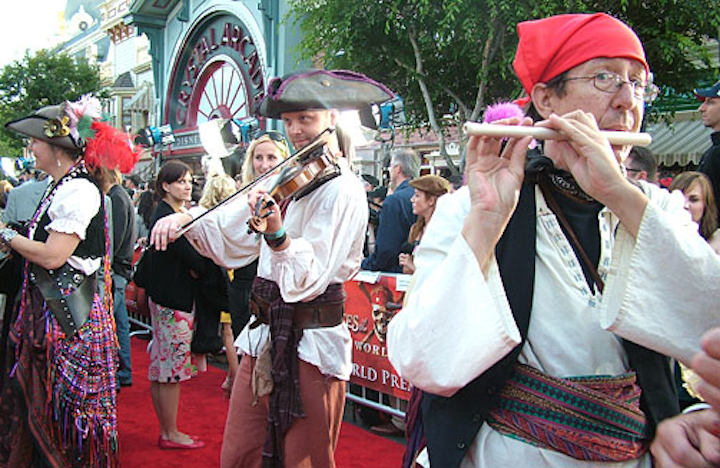 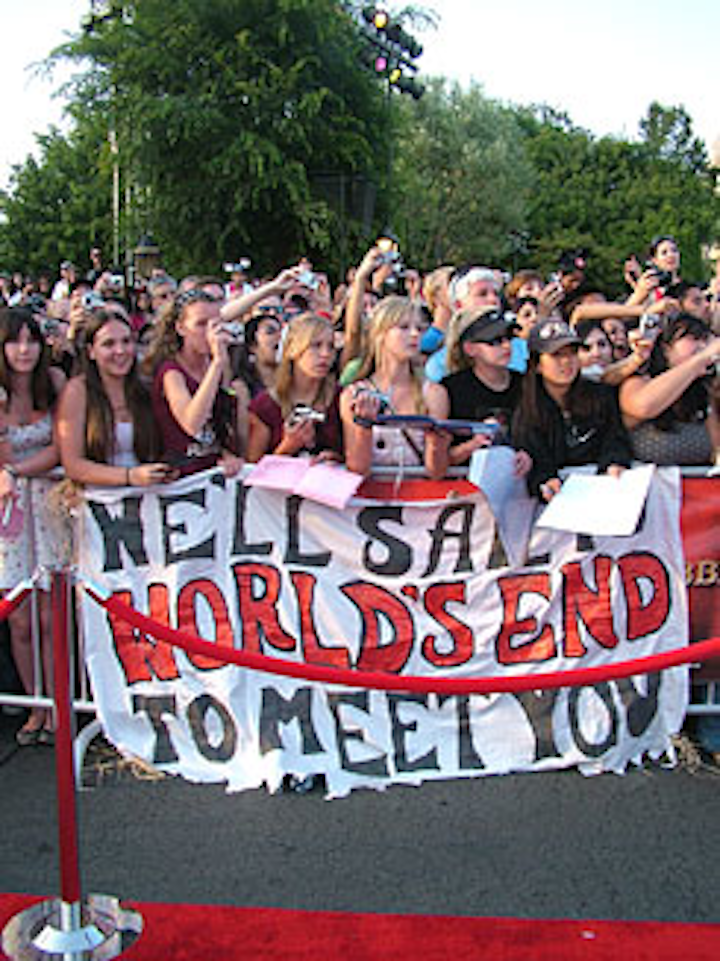 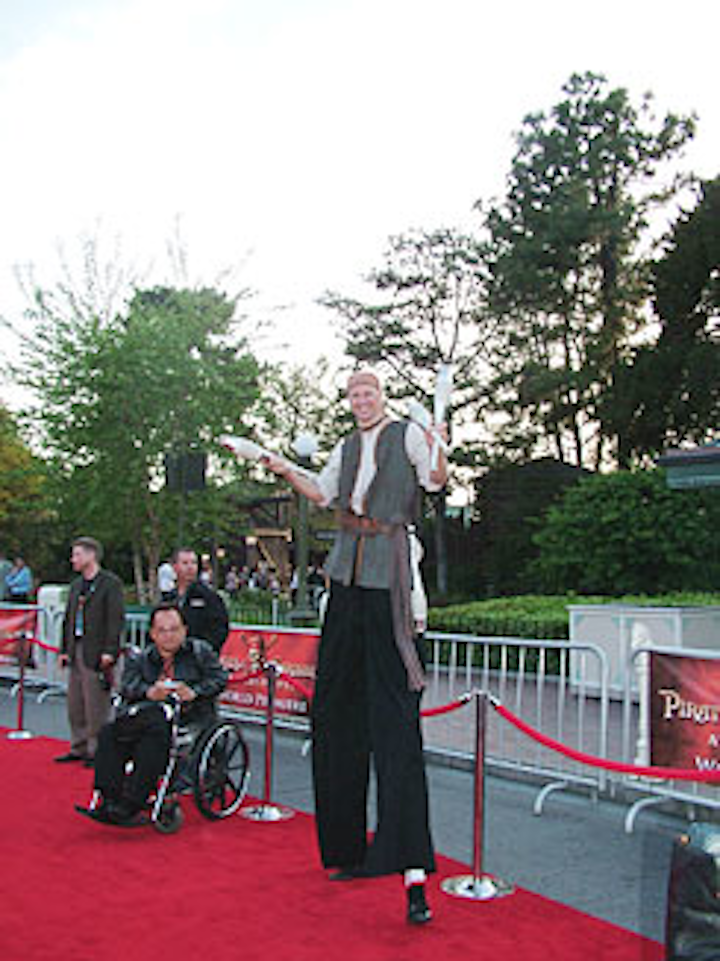 A towering stiltwalker entertained toward the end of the carpet, where the crowd finally thinned.
Photo: BizBash 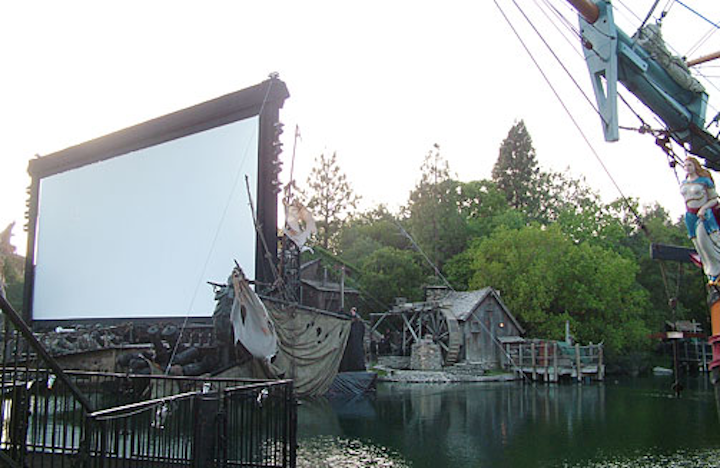 The movie made its debut on a giant screen over the water, with a pirate ship docked nearby.
Photo: BizBash 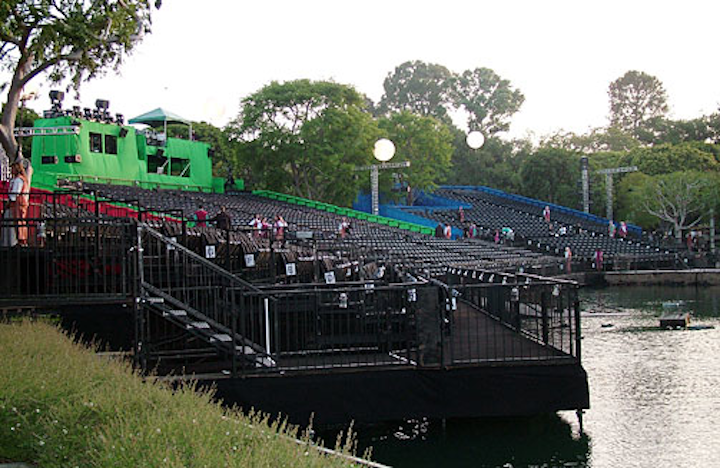 Guests watched the screening from their seats in an outdoor theater, which featured carefully color-coded sections for easy crowd management.
Photo: BizBash 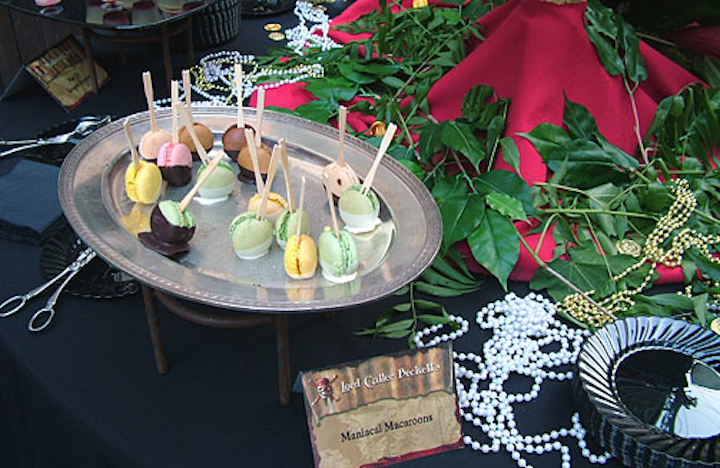 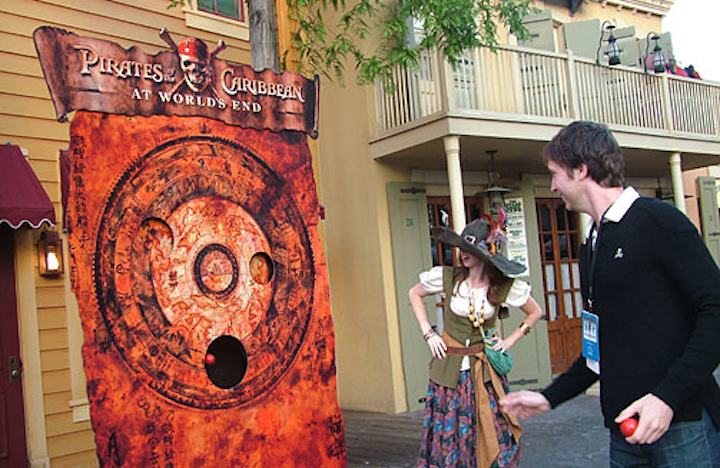