As Seen on TV

For the latest incarnation of its annual show house, Metropolitan Home teamed up with Showtime for a project that would give all of their time and money a lot more mileage.

Designing a dining room that brings the psyche of a serial killer to life with a bloody crime scene may not be high on the to-do list of a typical Metropolitan Home reader, but for the 2008 installment of the magazine's show house, it forged a unique partnership that involved just that. Thirteen designers turned a $20 million, 8,800 square-foot Greek revival townhouse on Gramercy Park into an embodiment of Showtime, with thematic rooms inspired by seven of the network’s series.

“Most magazines in the shelter category put on a show house every year,” explained Metropolitan Home publisher Deborah Burns. “The process involves finding the space, putting in a lot of effort, and having a little launch party. You run some images in your magazine and then basically it’s over. It’s a tremendous amount of work, and I’ve always felt that the return, in today’s world, is not what it used to be. When I joined Metropolitan Home, I wanted to know what we could do differently."

“Differently” meant finding a way to tap into a larger audience, and Metropolitan Home sought to accomplish this with a partner that shared its modern aesthetic and willingness to take risks. Showtime was an early suggestion, and during conversations between the two entities, the idea of rooms inspired by individual series and characters came up. Designers would be assigned one of the network’s series and given free reign to build a room around that show. One of just three single-family homes remaining on Gramercy Park, the historic four-story home chosen for the 2008 show house provided a substantial blank canvas.

It took five months for the whole project to come together, and when the doors of 23 Gramercy Park South opened for last night’s launch party, 470 guests celebrated in rooms inspired by a 16th century despot and a Miami Beach serial killer. The series chosen, which included Californication, Weeds, Dexter, The L Word, The Tudors, and The United States of Tara, all captured their muses with a mix of subtlety and playful literalism. The hemp carpeting and carefully folded rolling papers in the Weeds living room required close inspection, while the blood-splattered Dexter dining room haunted the first floor with the ghosts of a dinner party gone horribly awry.

The most difficult task, however, seemed reserved for Tori Golub, who was charged with designing a bedroom based on the upcoming series The United States of Tara. Golub built the bedroom and adjoining bath and walk-in closet without ever even seeing an episode. All she was given was a script for the pilot. That kind of creative control seems to have worked for everyone involved. Burns was thrilled by how designers such as Amy Lau, Vincente Wolf, and Jamie Drake were able to innovate while remaining inside the tight parameters of the themes. “The real payoff is that they were able to create trends with legs,” she says.

This year’s show house will have longevity in more ways than one. In addition to remaining open for four weeks, with walkthroughs to the public during the day and events scheduled every night, including a season premiere party for Californication and Dexter, the partnership gives the house a second life on television. Showtime filmed construction and design of the home from the day it was gutted, and the footage will be edited down into a miniature documentary that will air on the network. Profiles of the individual rooms will also be available to On Demand subscribers.

When all is said and done, the magazine anticipates creating more than 60 million impressions with the house, far surpassing the reach of its previous incarnations. Burns thinks the partnership with Showtime is something Metropolitan Home is keen to keep up. “We certainly don’t see why not,” she says. “Every designer would interpret these shows in a different way.” 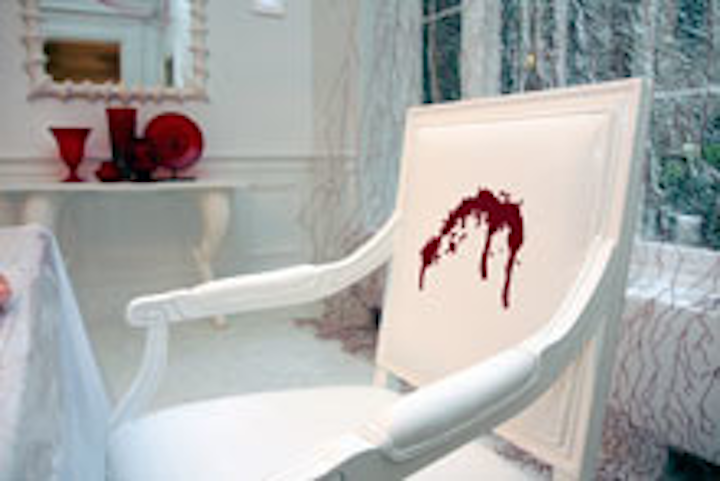 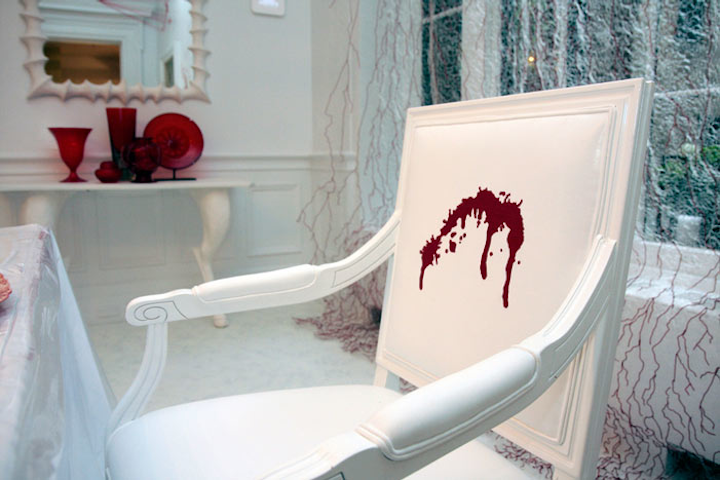 Leah Pickler embroidered red silk into splotches and droplets of blood on the 12 chairs in the Dexter dining room.
Photo: aliceandchris.com for BizBash 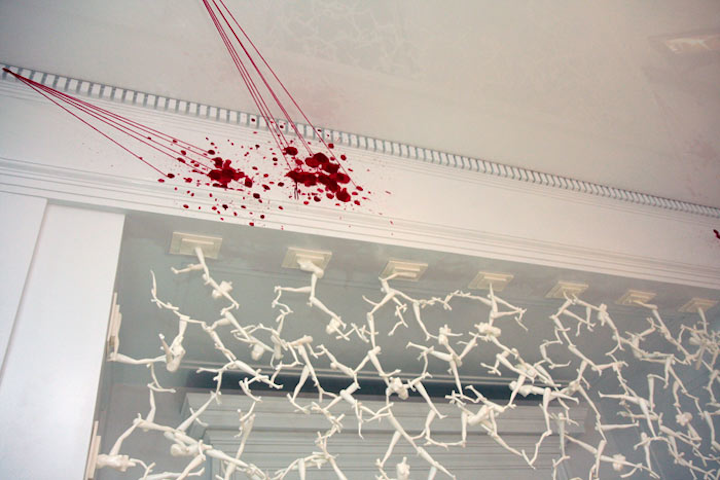 Artist Chris Klapper cast 1,500 doll parts out of resin and assembled them into netting around the doorway, above which stretched yarn simulated the forensic techniques utilized on Dexter.
Photo: aliceandchris.com for BizBash 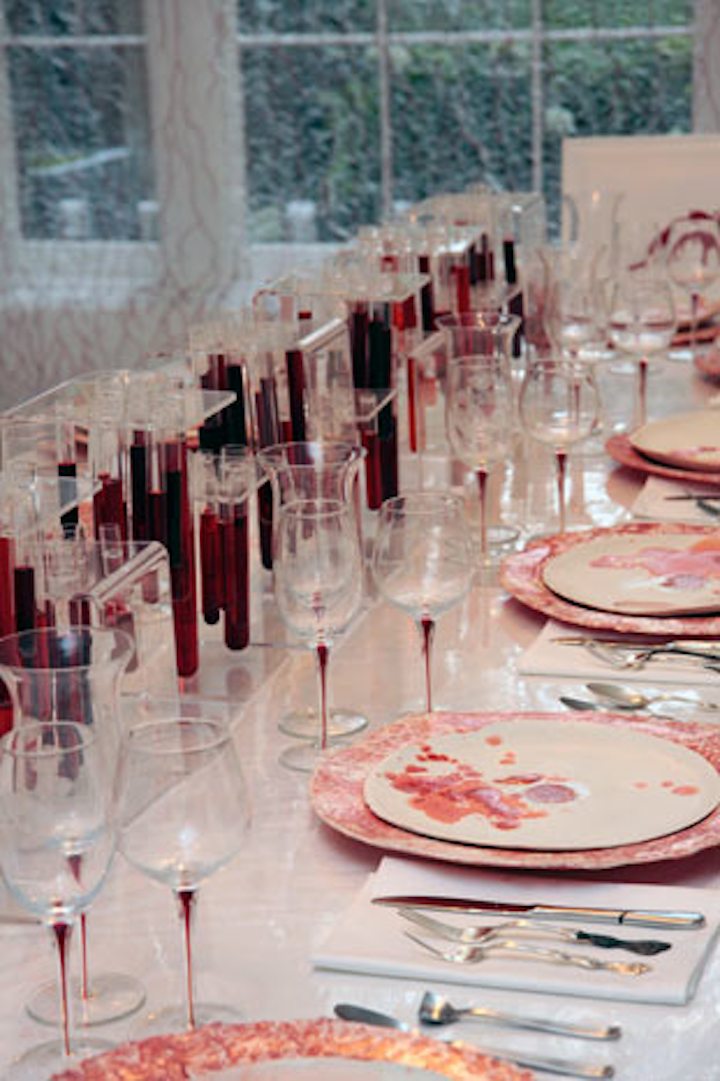 Designer Amy Lau built the Dexter room around a dining table that featured silverware fashioned into jagged tools, ceramic place settings that will be sold to the public, and glasses etched with fingerprints.
Photo: aliceandchris.com for BizBash 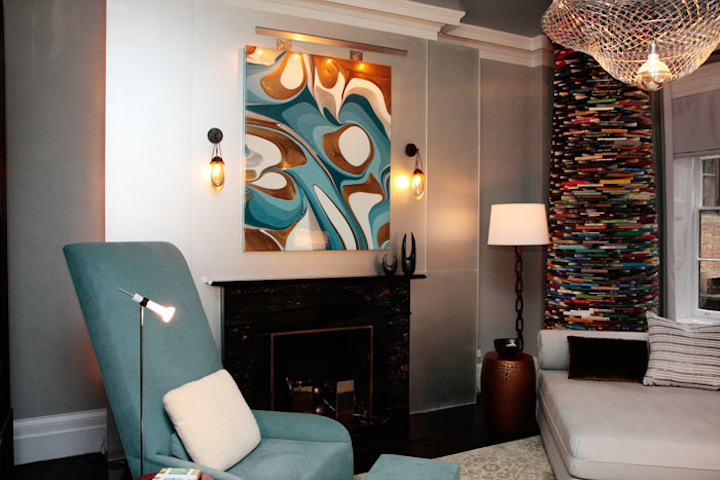 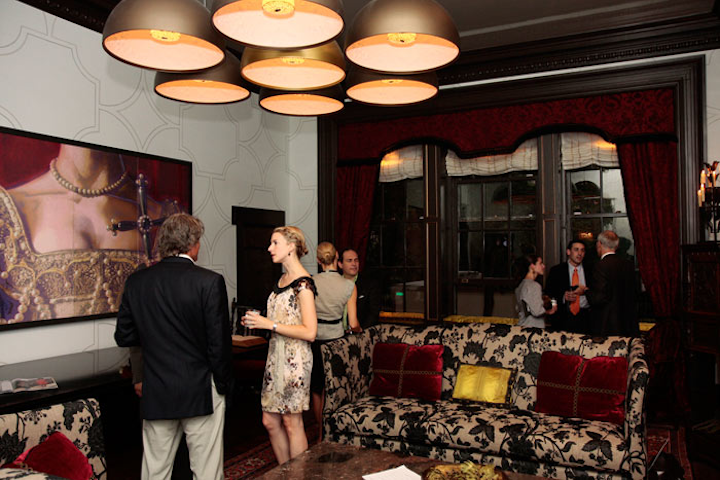 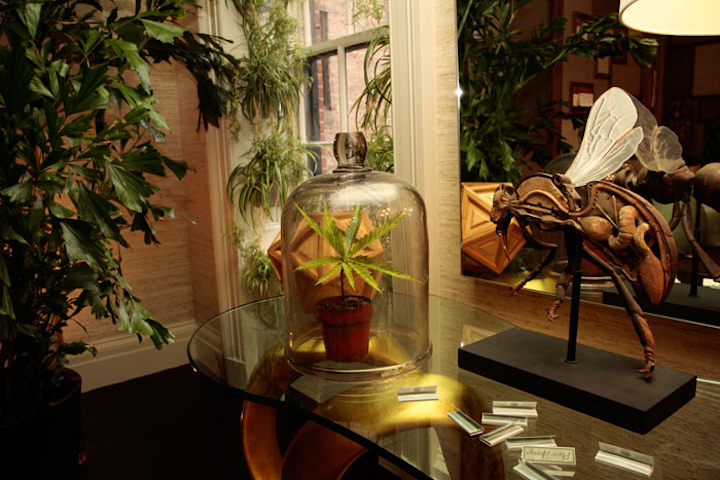 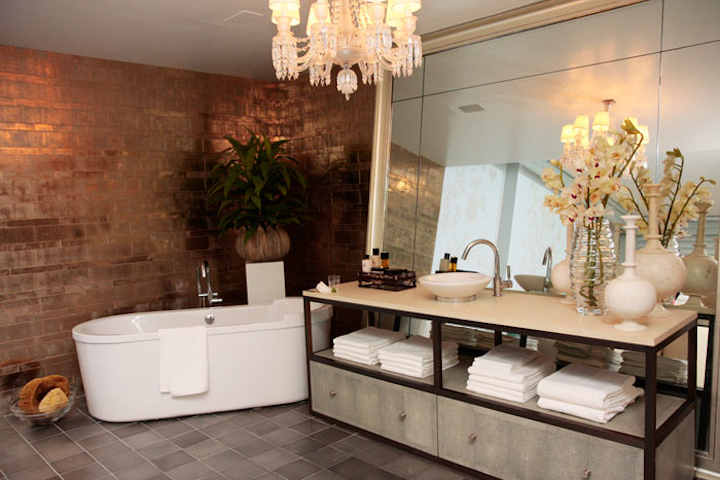 The bath attached to the The L Word bedroom opened right into the sleeping area, and a giant mirror reflected the moving wallpaper installation beside the bed.
Photo: aliceandchris.com for BizBash 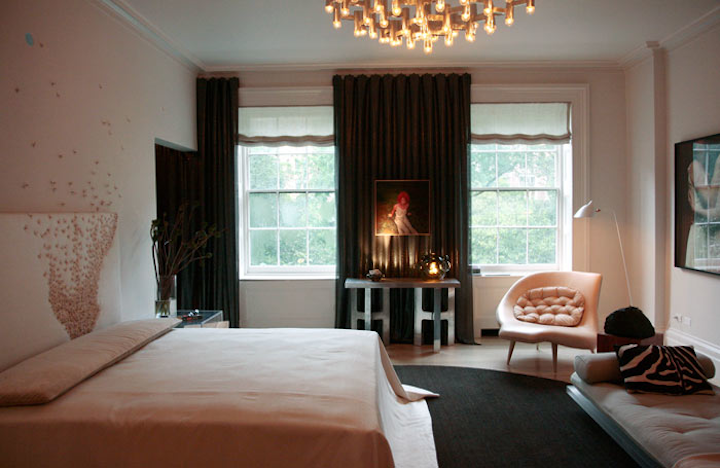 The bedroom inspired by the upcoming series The United States of Tara belongs to a housewife with dissociative identity disorder, so designer Tori Golub gave her multiple options for where to sleep.
Photo: aliceandchris.com for BizBash 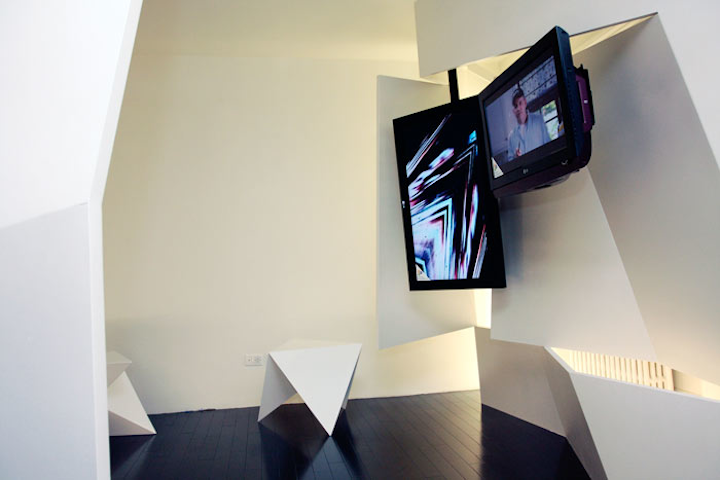 The fourth-floor media room housed the work of architect Luca Andrisan, whose bending walls and multiple televisions sought to capture the identity of Showtime as a whole.
Photo: aliceandchris.com for BizBash 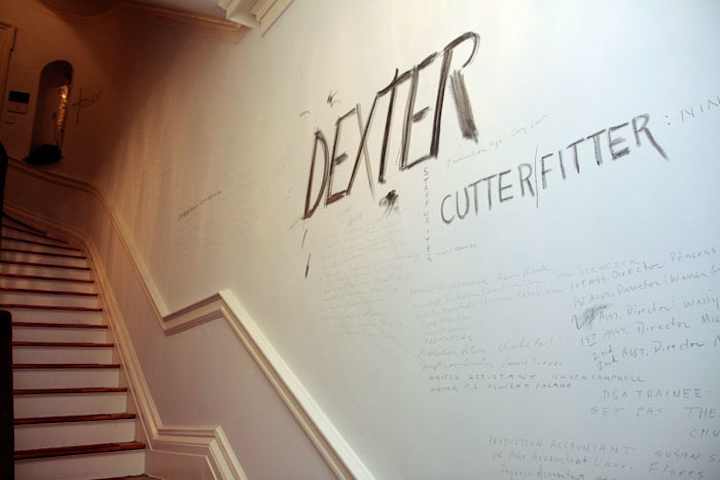 Names of the cast and crew of all the series highlighted in the show house were scrawled into the stairwell's otherwise bare walls.
Photo: aliceandchris.com for BizBash
More in Event Design