Despite its celebrity guests, trio of specialty cocktails, and free one-hour Chromeo concert, Belvedere's promotion in New York on November 29 was more than just a branded holiday stunt. Committed to achieving an AIDS-free generation by 2015 in partnership with (Red)—the campaign founded by Bono and Bobby Shriver to fight H.I.V. and AIDS in Africa—the vodka brand staged an awareness-oriented takeover of the meatpacking district that turned Gansevoort Plaza into a winter weather nightclub.

"Only a Scotsman would plan an outdoor concert at the end of November," joked Belvedere president Charles Gibb during his speech from inside a heated V.I.P. reception at the adjacent restaurant Bagatelle. "But cold is just a sensation that reminds us we're alive."

As the second year in Belvedere's four-year campaign with (Red), last Thursday's event aimed to generate buzz around a limited-edition red metallic bottle of the brand's unfiltered rye vodka, half of all sales from which benefit the Global Fund to Fight AIDS. According to Gibbs, Belvedere's fourth-quarter holiday, gifting, and duty-free sales in 2011 supplied more than two million days' worth of life-saving drugs, affecting the lives of an estimated 3,500 H.I.V.-positive mothers in Africa.

"I'm really proud that the brand I'm responsible for was able to do something as meaningful as that," said Gibbs. "It gives me a huge sense of personal satisfaction, gives my employees a sense of worth and value in the community, and it gives everyone a sense that Belvedere is a brand that cares deeply about big issues in today's world."

The meatpacking celebration was Belvedere's flagship event in the lead-up to World AIDS Day, with similar events taking place in a dozen locations around the world, including Los Angeles, England, Germany, Australia, Hong Kong, Singapore, Brazil, and Canada. To attract revel-seeking New Yorkers to its cause, the brand commissioned Loop, a London-based artist team whose work has been exhibited at the MoMA and the Victoria and Albert Museum, to create 20-foot-high treelike sculptures from parametric LED lights. The illuminated, arched designs acted as a centerpiece to the high-energy set from electro-funk DJ duo Chromeo. Loop's sculpture remained erect in the plaza through December 1, when Belvedere hosted a follow-up event called "(Red) on Ice" in collaboration with the Standard hotel.

Unsurprisingly, shutting down a well-trafficked section of the city requires a significant number of government positions—"a huge number," if you ask Gibbs. To accommodate residents of the cobbled-stoned neighborhood, Belvedere met with the Meatpacking District Improvement Association and the City Council to establish appropriate noise regulations and curfew hours.

The event wasn't designed to be an all-night rager, like some alcohol-centric parties. Rather, Belvedere had a different intention in mind: "It's about people celebrating but at the same time realizing that there's a serious message underneath," said Gibbs. "That's the great thing about (Red)." 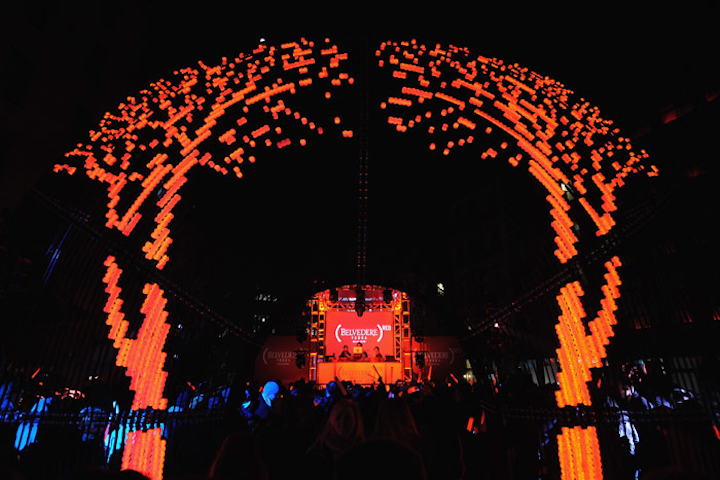 The trees served as the centerpiece, starting out illuminated in blue and white—the colors of Belvedere—and changing to red for World AIDS Day and (Red).
Photo: Bryan Bedder/Getty Images for Belvedere Red Night Lights for World AIDS Day 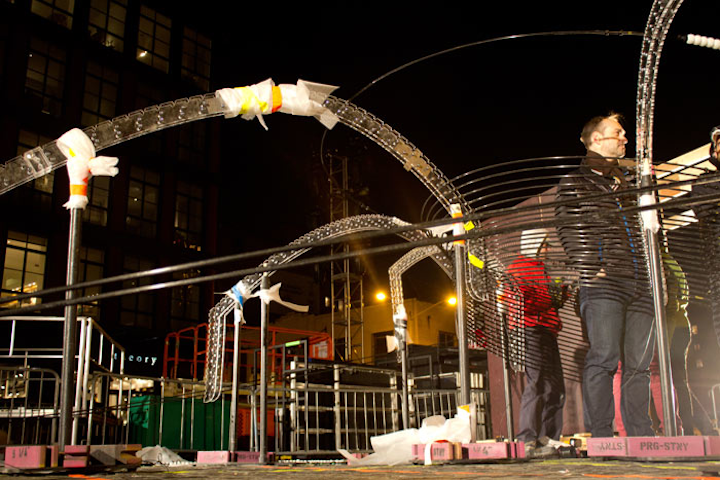 Belvedere commissioned London art studio Loop to design tree-shaped lighting sculptures inspired by the vodka brand's logo. Made in the U.K. and shipped to the U.S. for the promotion, the pieces had to be set up and installed by a crew in the days leading up to event.
Photo: Nadia Chaudhury/BizBash 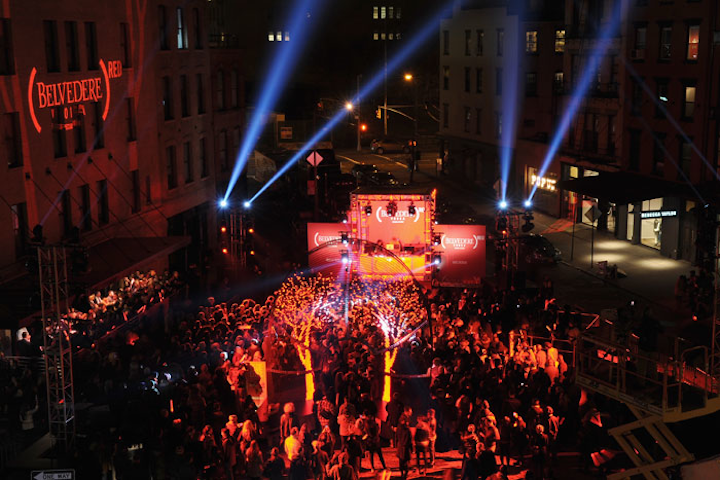 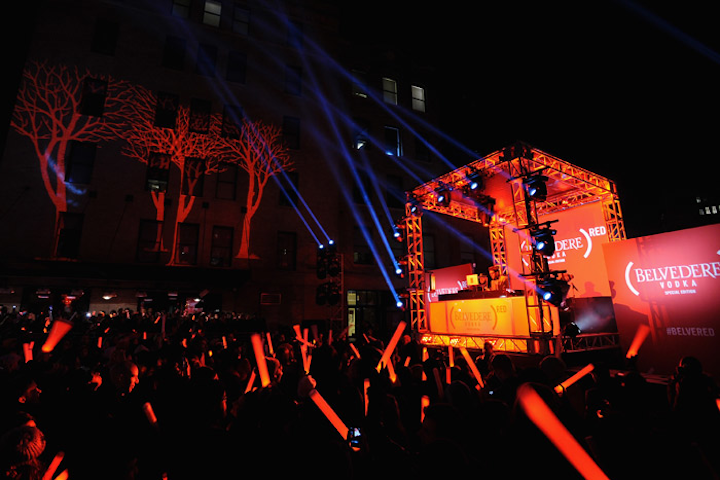 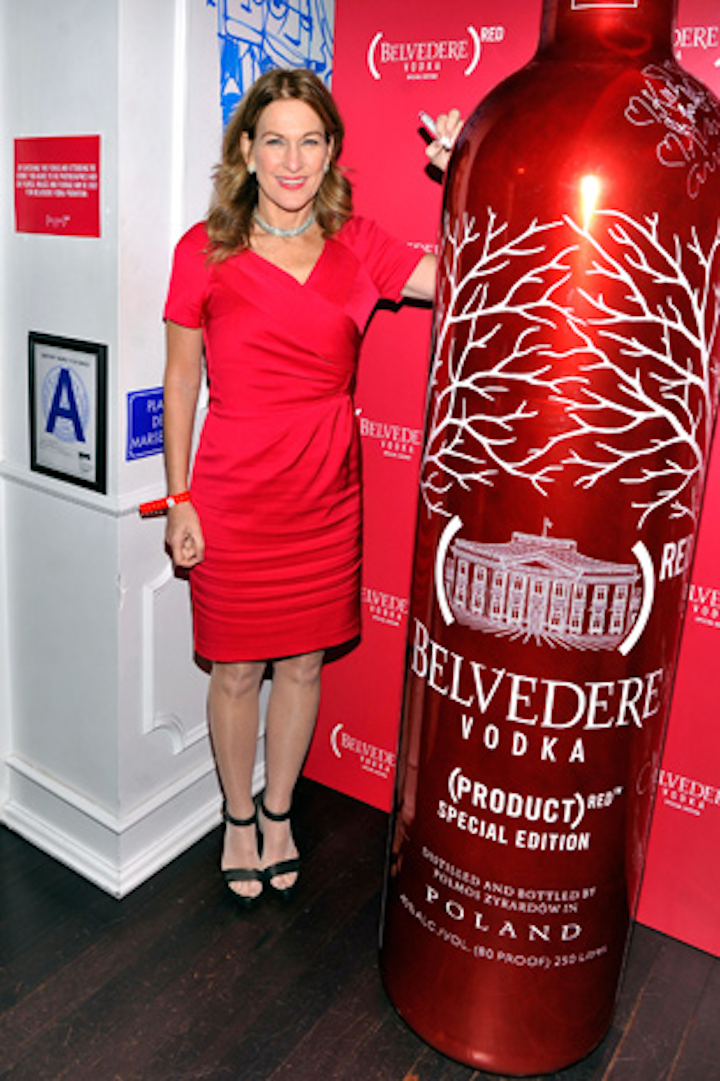