The beer brand, known for its Most Interesting Man campaign, provided interesting immersive experiences for guests at its Grand Masquerade event.

In somewhat of an understatement, Dos Equis brand director Ryan Thompson observed that "folks are very used to a lot of razzle dazzle and extravaganza in New Orleans." Choosing the decadent city to host the beer brand's third Grand Masquerade event raised the stakes to create a spectacle that the nearly 2,200 guests would remember.

"We try to go overboard and make sure people understand everything gets more interesting when you put on a mask," Thompson said. "One thing we believe in is taking our consumers out of their comfort zone enough to make them feel comfortably uncomfortable and holding their hand as we lead them back."

The masquerade concept debuted in 2012 when Dos Equis was looking for a way to differentiate itself from competitors throughout October leading up to Halloween. It settled on an event that would feature various consumer engagements and entertainment, launching in New York in 2012 and moving to Miami in 2013.

Guests at the November 22 event arrived and were offered masks if they hadn't already brought one. Then brand ambassadors escorted them in one of two directions, with each path featuring a different decor concept: the lush world of the living and the shadowy underworld. Immersive experiences at the event included the Chance Bakery, where treats incorporated edible insects, a "Dinner for One" in which a blindfolded guest sampled an exotic meal while a brand ambassador held up large cards in boxing-ring fashion that described the course, and safe interactions with birds of prey such as an African raven. A photo engagement also provided surprises: As guests posed with a costumed performer, staff behind the fabric-covered photo wall would lean into the photo, creating a spooky illusion.

"Dos Equis has developed this reputation for being a beer brand for those who want to live a more interesting life," Thompson said. "By coming to the masquerade and encouraged to dress in your most interesting attire, understanding the level of participation that the brand expects of you, you would be surprised how willing guests are to move away from their friends and have new experiences."

Another new experience at the event was a virtual reality tour of the mansion belonging to the Most Interesting Man, a character from the brand's advertising campaign. Using Oculus Rift headsets, guests could watch as various characters came into the scene, including a cougar who sat in the middle of the room. The brand was worked into the video content—a butler is serving the beer to guests—but just as important was tying it into the live event, Thompson said. "As the experience concludes and you remove the headset and mask, you're within arm's reach of a cold Dos Equis waiting for you," he said. "It's literally right there. That's where the virtual experience becomes a reality."

With such a large number of guests, it might seem like assembling the guest list was not difficult, but Thompson said getting the mix right was crucial. It included stakeholders from distributorships from across the country, local distributor partners, and consumers from the local market.

"When we're looking for influential opinion leaders to attend these events, the diversity of our audience is so critical," Thompson said. "We want to make sure just like the brand itself is about being truly vibrant and exploring, going new places and meeting new people, we want to make sure we're reaching out to different people as well."

For this year's masquerade, Thompson told BizBash the event will return to New York in a location to be announced later. 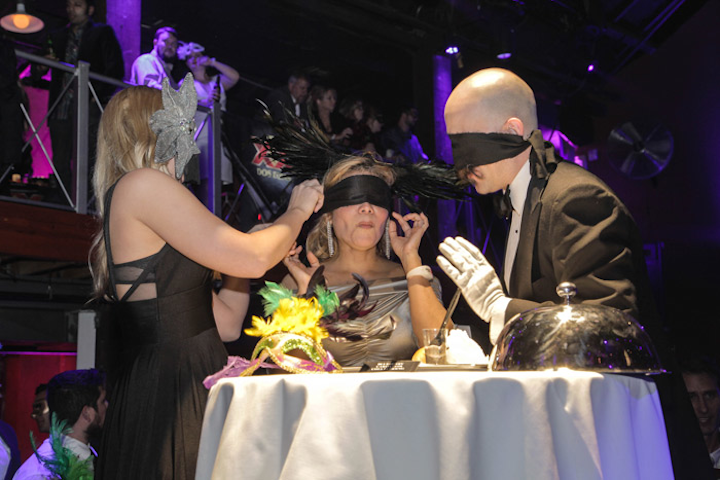 At an experience called "Dinner for One," a blindfolded guest would sample various exotic delicacies such as armadillo, emu, or sea urchin. A brand ambassador held up large cards in boxing-ring fashion that described the course as the volunteer ate it.
Photo: Courtesy of Dos Equis 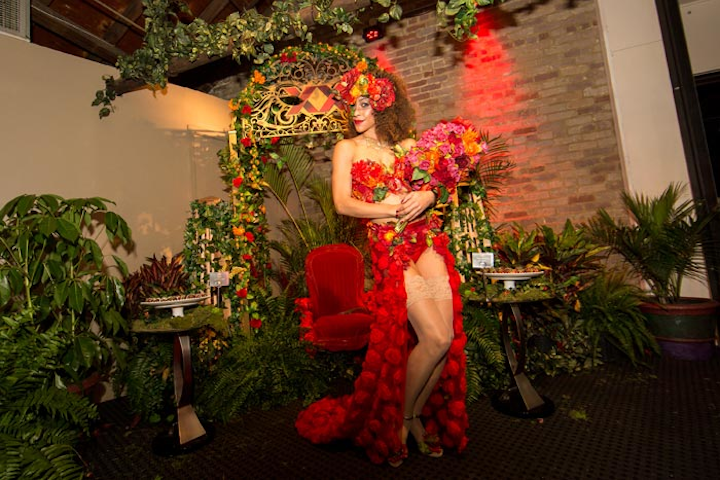 As guests entered the event, they were escorted in one of two directions: one path decorated as the lush world of the living and the other as a shadowy representation of the underworld. Costumed entertainers helped set the scene.
Photo: Courtesy of Dos Equis 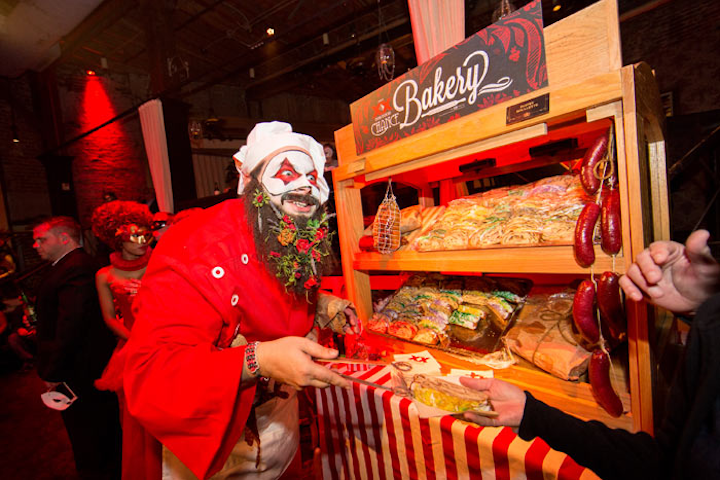 At the Chance Bakery, a costumed baker would offer guests an array of dessert delicacies that contained edible insects. "There is a large community of exploration and culinary connoisseurs who are trying to proliferate the idea of insects as nutrients for regular eating," Thompson said. "With many of our events, we love to exploit the concept and offer our guests unique takes on delicious desserts where there might be a Madagascar cockroach, a mealworm, or a roasted and spiced cricket."
Photo: Courtesy of Dos Equis 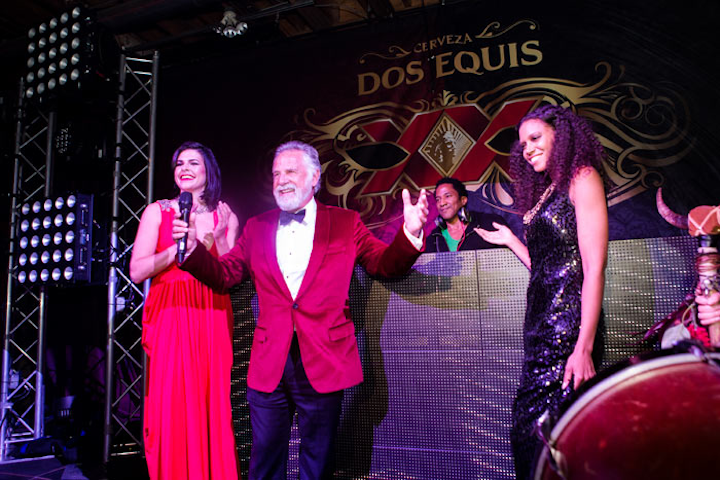 The brand's "Most Interesting Man" made an appearance and posed for photos with guests. DJ Q-Tip provided the headlining entertainment.
Photo: Courtesy of Dos Equis 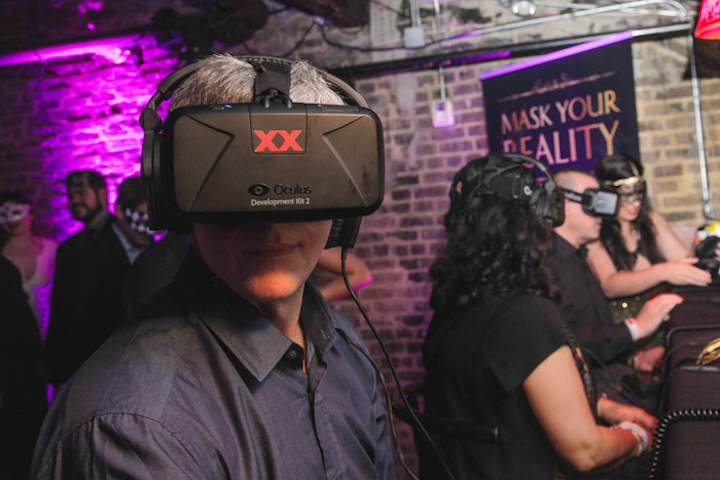 Guests donned Oculus Rift headsets for a virtual reality experience that invited them to experience a 360-degree tour of the Most Interesting Man's mansion and watch the people who visit. The concept derived from a Dos Equis game online that asked people to help the man find his black book. Thompson said that more than 27 million people had viewed the video—more than any other video produced by Heineken Global.
Photo: Courtesy of Dos Equis 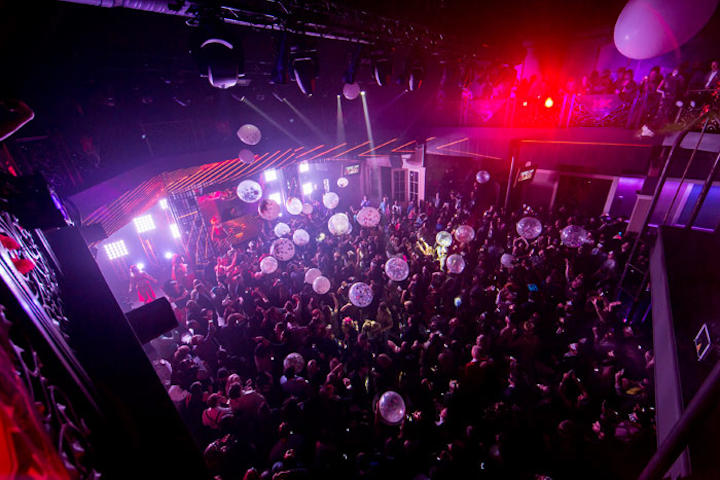