How Robin Hood Turned Its Benefit Into a Personal Affair

The strength of the program, which featured a nearly two-hour concert from Paul McCartney, helped sell out the 4,000-person event at the Jacob K. Javits Convention Center. The event featured its usual slate of boldface names, with Katie Couric as host and appearances by Governor Andrew Cuomo, former New York Yankees pitcher Mariano Rivera, comedian Michael Che of Saturday Night Live, and Tonight show host Jimmy Fallon, who introduced McCartney. The surprise musical guest was Jon Bon Jovi, who sang a somber, stripped-down version of his hit “Livin’ on a Prayer.”

This year the foundation debuted a new fund-raising strategy by hosting two satellite parties for a younger generation of philanthropists who might not be able to afford the single-ticket price of $3,000. The events, held at Lavo and the Gallery at the Dream Downtown hotel, drew 1,000 people and raised $150,000.

“This is our first attempt to spread beyond the Javits,” said Jayme Rothman, director of events and sponsorships. “We want to grow the next generation of poverty fighters. We’re hoping that five or 10 years down the line there are parties in Queens, in Staten Island, all over the place in living rooms and bars to come together to help our neighbors in need.”

The events were joined by a common hashtag: #RHBenefit, and tweets from guests at the three venues were streamed across the 16 screens lining the dining room of the Javits Center throughout the evening.

At all three venues, the theme was “Together.” More than 80 percent of guests have attended the event before, so the challenge is to provide a different experience each year, said Lindsay Carroll, one of the event’s producers. Inspiring this year’s decor was a partnership with Brandon Stanton, creator of the Humans of New York photo blog that features portraits of the city’s diverse residents. The event design, by David Stark Design and Production, incorporated the photos and theme into the entrance, cocktail space, and dining area.

Guests entered by walking through the lens of a giant camera. They emerged from a tunnel into a vibrant gallery of portraits from the Humans of New York collection. That led into the cocktail space, where 15-foot letters spelling out the word “Together” were staggered in the center of the room. Stark created photo opportunities, executed by Smilebooth, in which guests could pose in front of iconic New York backgrounds—from Luna Park at Coney Island to Central Park to a subway car. In a surprise for guests, the photos later were used in the program as the backdrop to a running total of pledges.

In the main dining area, portraits that Stanton took while visiting eight of Robin Hood’s community partners were used in four-sided centerpieces—all part of the foundation’s goal of humanizing poverty for guests, Carroll said. Their stories also were told throughout the program and provided a welcome counterpoint to the event’s celebrity guests.

As the program concluded, doorways flanking the stage opened, revealing a concert stage for McCartney’s performance. The curtained-off area provided an intimate space for the show but also helped clear the dining room. A challenging load-out schedule meant that planners had to strike each area immediately after guests progressed to the next one. Since some guests might normally linger in the dining space over cocktails, planners created a separate “Exit Lounge” where guests could get drinks, chat at highboy tables, and watch a live feed of the event. 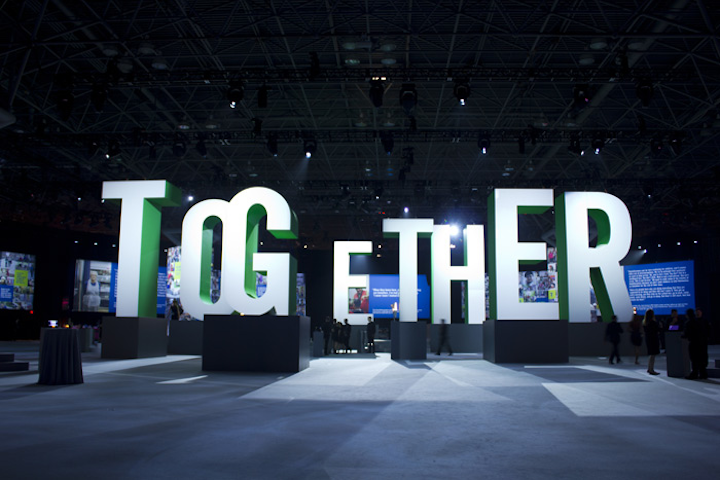 Fifteen-foot letters spelled out “Together,” the evening’s theme. The letters were staggered throughout the center of the room, but “the idea from David Stark is that you walk into that room and regardless of where you are the ‘together’ phrase is intact,” said Lindsay Carroll, one of the event’s producers.
Photo: Cornelia Stiles/BizBash 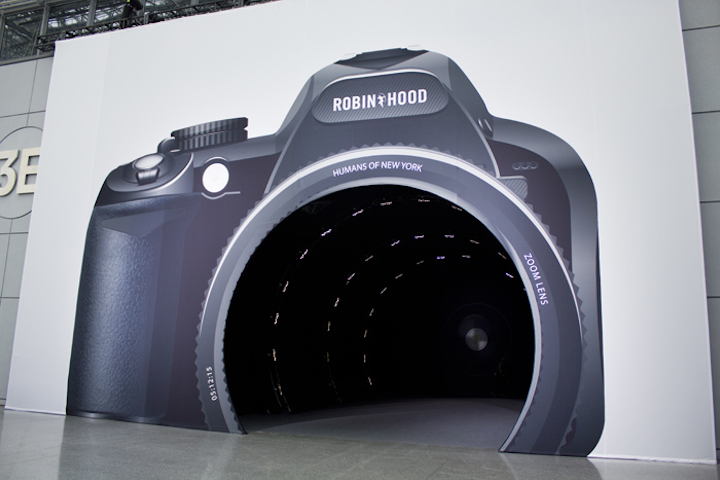 Guests entered the event through a giant camera lens, alluding to the portraits used throughout the decor and program.
Photo: Cornelia Stiles/BizBash 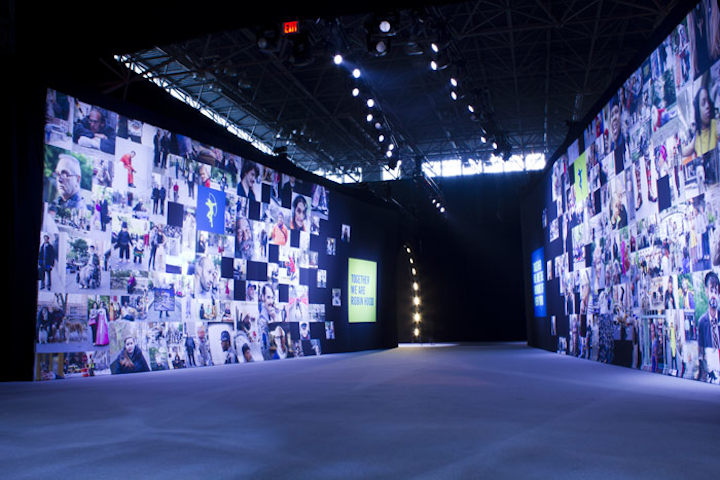 A gallery of portraits from the photo blog Humans of New York led the way to the cocktail space.
Photo: Cornelia Stiles/BizBash 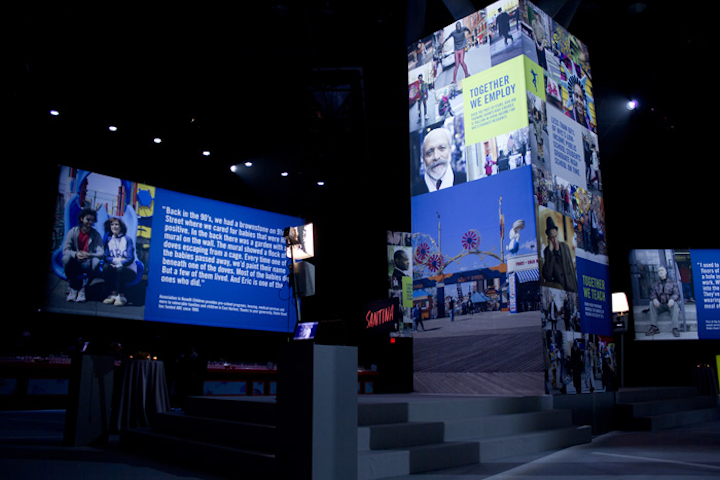 Photo stations set up throughout the cocktail space featured backdrops of iconic New York scenes such as Luna Park at Coney Island. The finished photos inserted guests into those locations.
Photo: Cornelia Stiles/BizBash 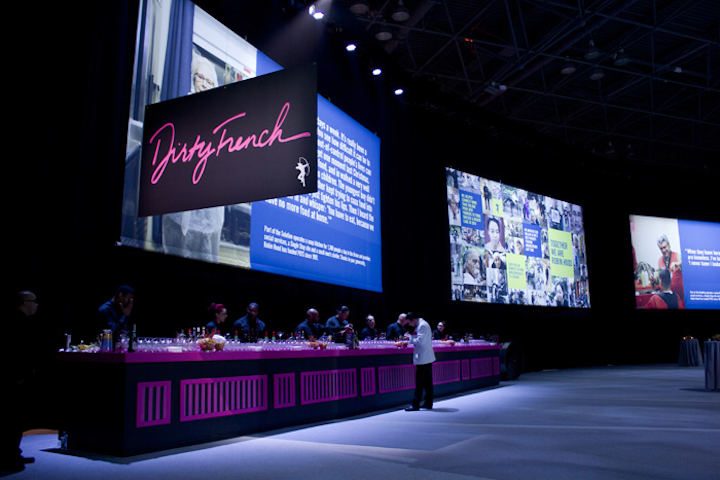 Major Food Group provided cocktails during the reception at bars hosted by four of its famed New York restaurants: Dirty French, Carbone, Santina, and ZZ Clam Bar. Each bar had unique decor and served a signature cocktail as well as a full bar.
Photo: Cornelia Stiles/BizBash 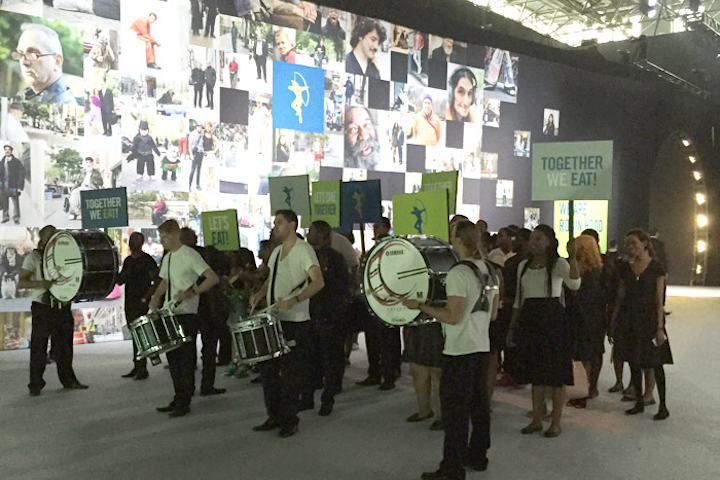 When it was time to transition from cocktails to dinner, a drum line and choir provided an energetic version of Aerosmith’s “Walk This Way” and guided guests through the space.
Photo: Beth Kormanik/BizBash 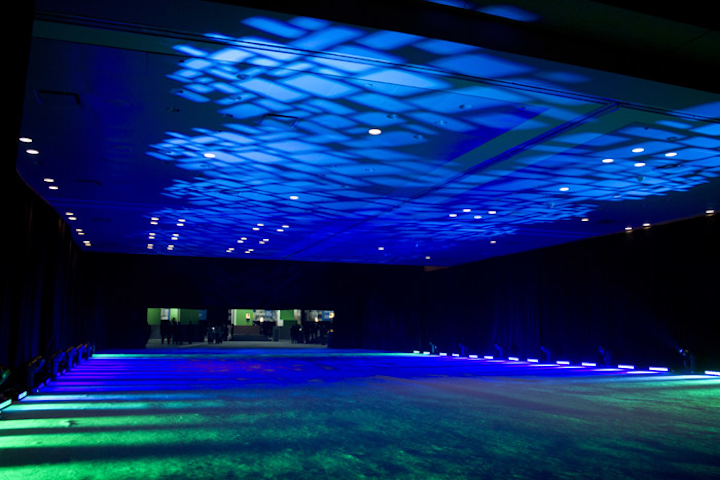 A tunnel with dramatic lighting connected the cocktails space to the dining room. Since guests would quickly pass through the space, lighting was a cost-efficient way to provide decor.
Photo: Cornelia Stiles/BizBash 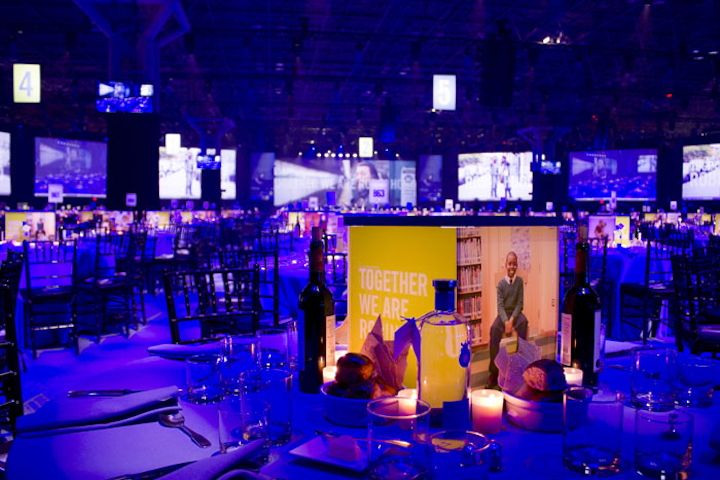 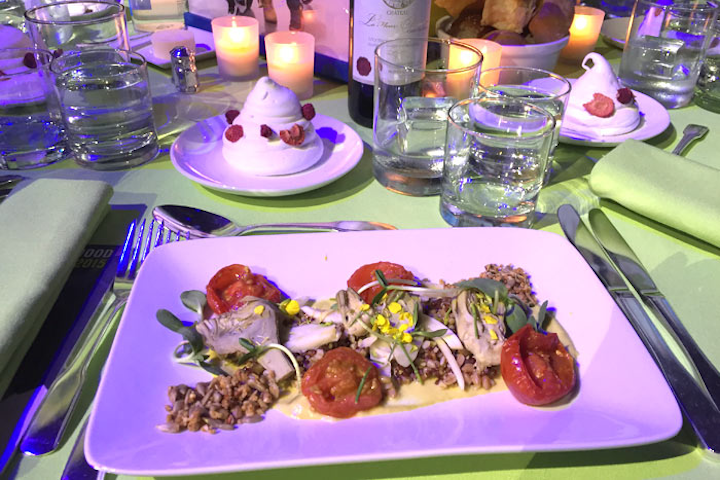 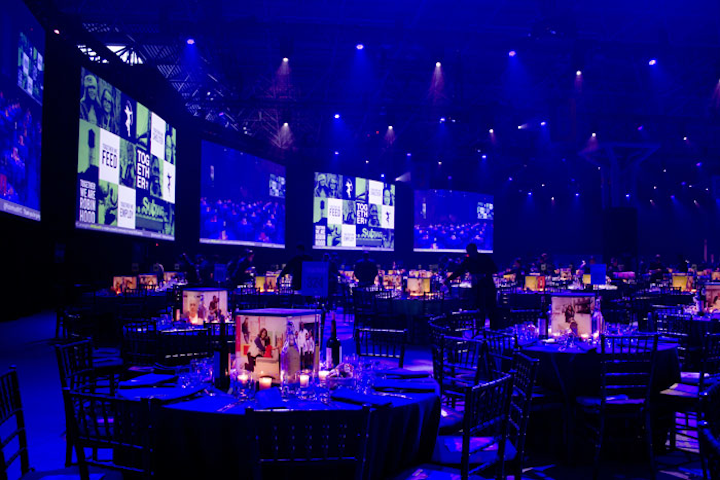 The dining room seated 4,000 guests. Sixteen screens lining the perimeter of the room gave all guests a close-up view of the stage, videos, and other elements of the program.
Photo: Cornelia Stiles/BizBash
More in Event Design