NEW YORK—On January 23, New York's historical Sousa House transformed into the House of Philosophy for a one-day influencer event and V.I.P. cocktail hour hosted by the beauty brand. At the helm of the event's experiential design was event planning and production company Eventique, which was tasked with turning four floors of the venue into interactive yet informational displays of four Philosophy collections.

"The whole experience was a hybrid of getting [guests] reacquainted with some of the existing product lines and also introducing a new product line called Nature in a Jar," said Eric Wielander, Eventique's director of strategy and communications, who spent two days setting up the event with a team of seven.

When it came to appealing to the influencer crowd, the Eventique crew tackled the project one Instagram-worthy photo op at a time. "It was definitely part storytelling, but also part being very photogenic," he explained. "It wasn't just one photo moment. The intent was to have multiple—at least one or more in each different part of the house that represented the four different categories [of products] we were playing off of."

From the Nature in a Jar Room's soothing green hues to the Peel, Don't Conceal Room's vibrant shades of pink and yellow, each product's room was played up with color playing a major role. "The one thing that stuck out to us about [Philosophy] was their color palette. They use two different shades of pink; there's a light green; a light yellow," said Wielander. "So we really told the story through very prominent, serene uses of their color palette."

Though Eventique's event production expertise brought the experience from a concept to completion, Philosophy's known branding, of course, shone through—lowercase letters and all. "We were constantly thinking about, 'This activation, this graphic, this message, this tagline—does it feel relevant and right to what we want to say about the brand?'" noted Wielander. "And for the design and fabrication: 'Is it going to be not only something that articulates that message, but also is it going to create this moment with people that makes them want to voluntarily take a picture, share it, or write about it?'" 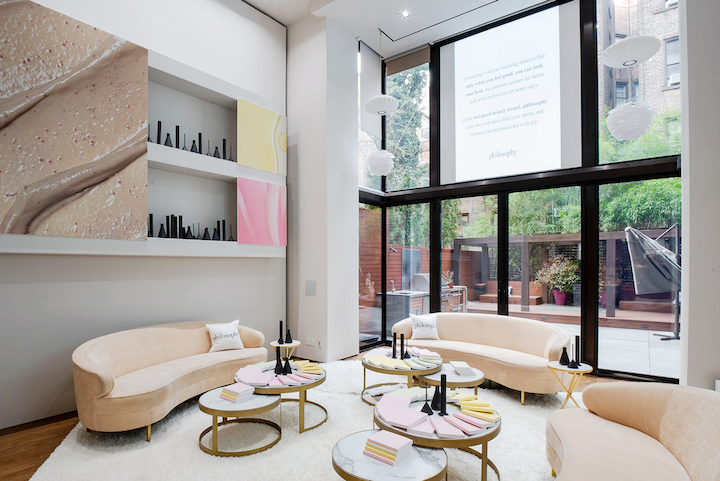 At the start of the experience, influencers and media guests (brought into the event in groups of 20 to 30) entered the Brand Room, where they were able to choose a journal—each of which had Philosophy's brand statement embossed on the cover. Eventique looked to Patina Rentals and RentQuest for the furniture used throughout the Sousa House.
Photo: Jean-Pierre Uys Photography 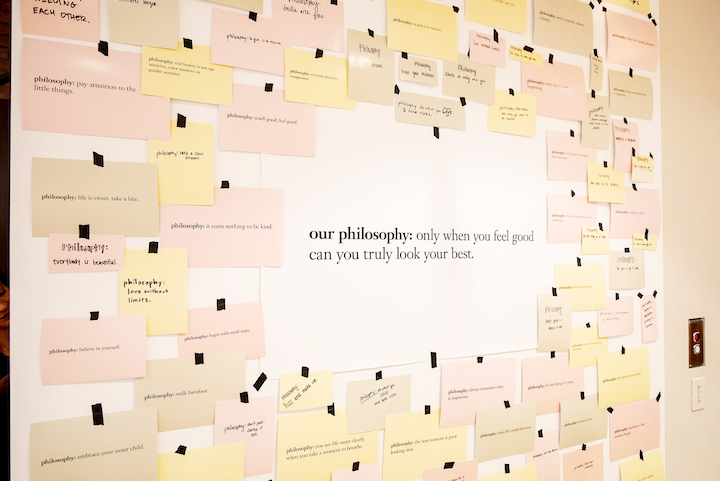 Upon entering the Brand Room, influencers were greeted with a floor-to-ceiling "wall of philosophies" that had numerous tenets printed to create a giant collage. Guests were encouraged to pick up a note card and add their own philosophy to the wall.
Photo: Jean-Pierre Uys Photography 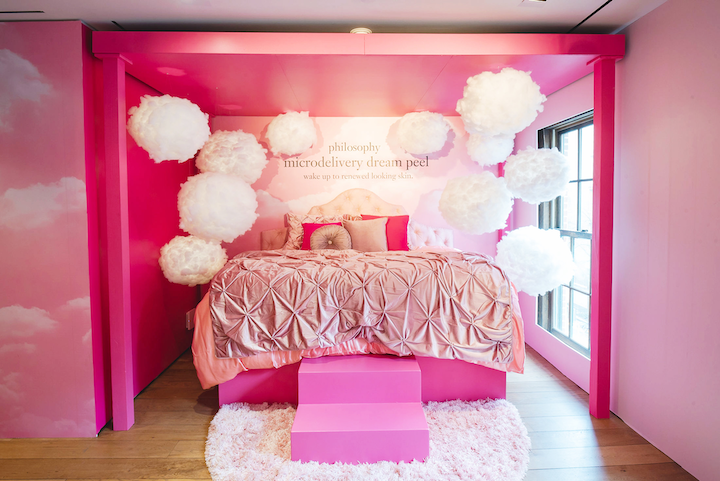 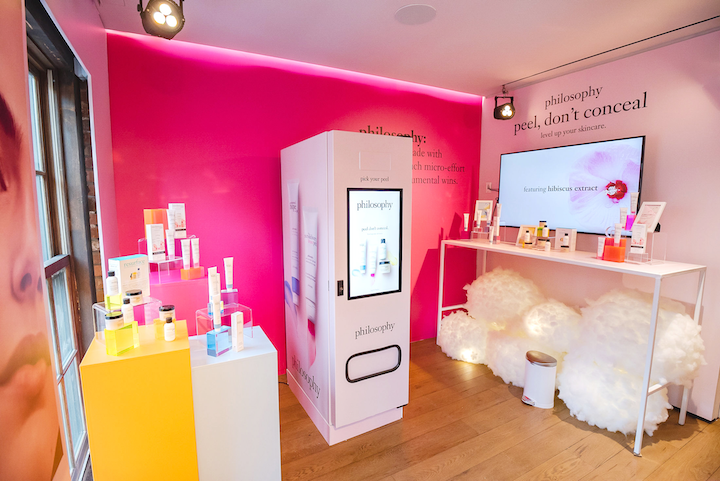 After getting their Instagram moment in the oversize bed, guests paid a visit to a tech-enhanced vending machine to take a quiz that matched them with—and provided a sample of—their perfect Philosophy peel product.
Photo: Jean-Pierre Uys Photography 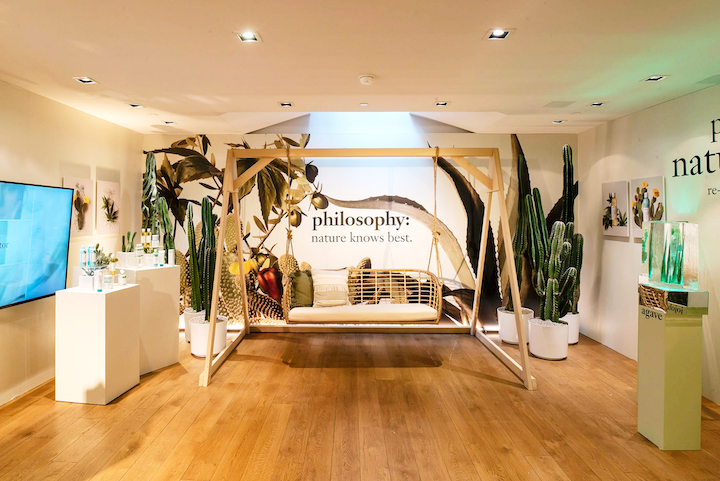 "The focal point of this Nature in a Jar Room was a photo-ready rattan swinging chair, surrounded by cacti and prepped with pillows for influencers to pose with for all their social media picture-taking. The skylight directly above the swing provided natural light," explained Wielander, who sourced the room's plants from Interior Foliage Design.
Photo: Jean-Pierre Uys Photography 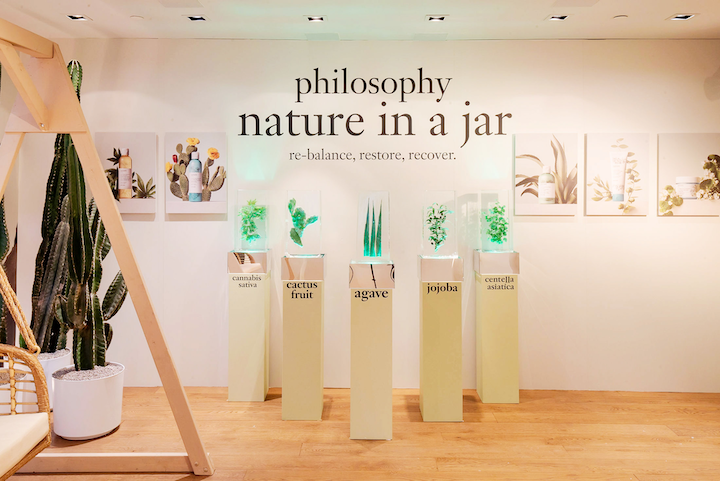 To highlight the desert plant ingredients of Philosophy's new Nature in a Jar product line—as well as the brand's emphasis on freezing fresh plants through a process called cryoextraction—Eventique tapped Okamoto Studio to enclose each plant within blocks of ice for display.
Photo: Jean-Pierre Uys Photography 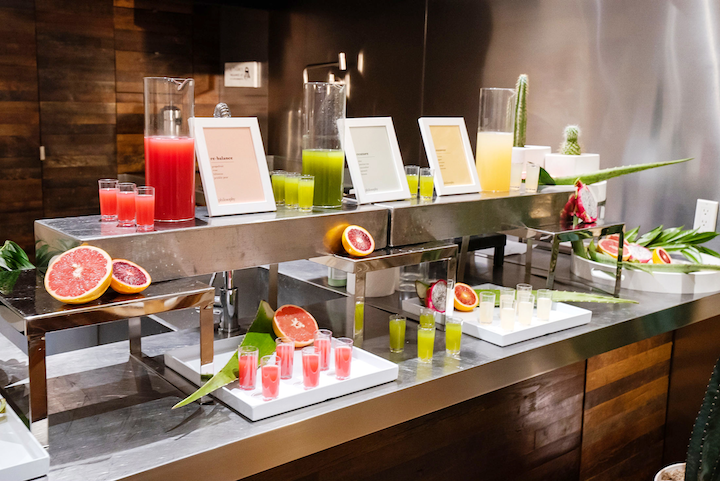 Convivium catered light fare such as juice shots of prickly pear, aloe, and agave—all ingredients from the new Nature in a Jar collection. Names of the juices (Re-balance, Restore, and Recover) as well as the hues of each mirrored Philosophy's color palette for the product. In addition to the juice bar, two signature cocktails were served that also played on the ingredients of the Philosophy product line.
Photo: Jean-Pierre Uys Photography 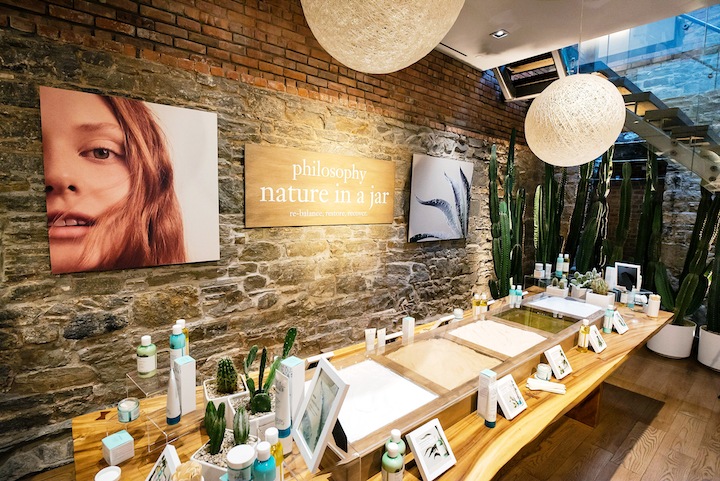 "An oversize palette showcased the lavish textures and tones of the newly released Nature in a Jar products, where guests could sample each item while discovering the ingredients, benefits, and values that define the collection," explained Wielander.
Photo: Jean-Pierre Uys Photography 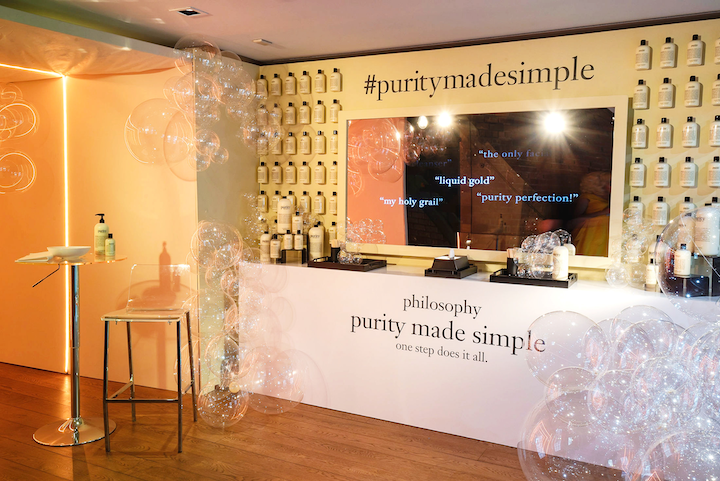 In the Purity Made Simple Room, guests interacted with a hands-on beauty bar stocked with sample cleanser. Eventique emphasized the product's refreshed branding with top-to-bottom bubble-like decor. On the screen flashed a selection of the product's 11,000-plus positive reviews.
Photo: Jean-Pierre Uys Photography 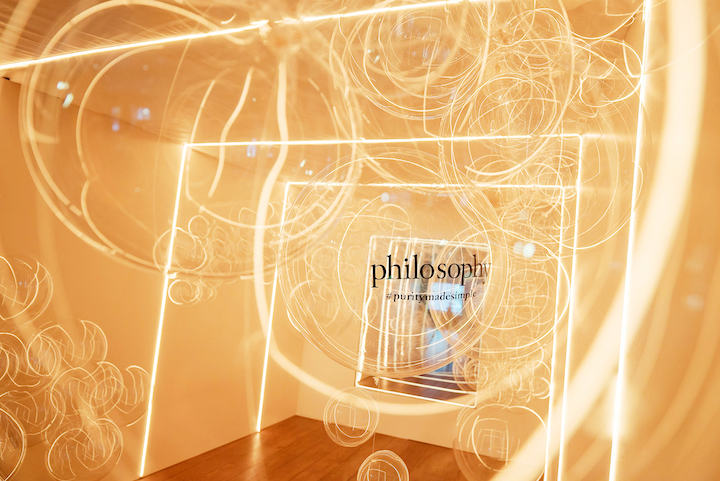 "An illuminated tunnel filled with giant, fabricated bubbles expressed both the new, modern branding and the simple, clean essence of Purity, leading to an infinity mirror that reflected the never-ending simplicity of the collection," said Wielander, who worked with Cigar Box Studios to create the attention-grabbing activation.
Photo: Jean-Pierre Uys Photography 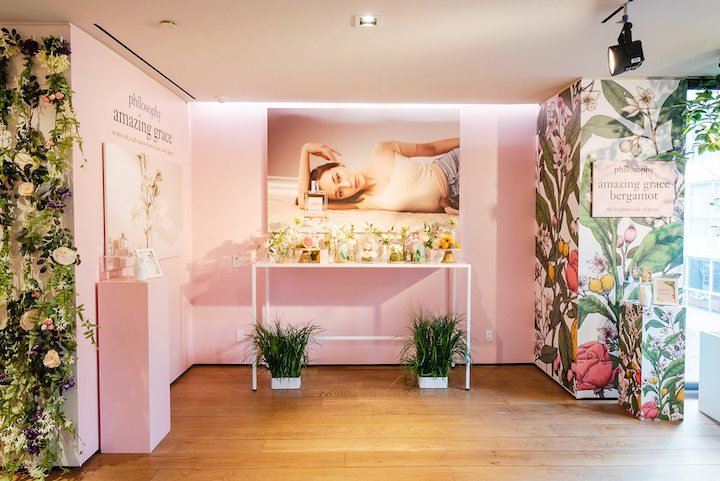 As guests walked into the Amazing Grace Room, they were met with an interactive scent station, at which an array of cloches showcased the various notes that together formulate the fragrances in Philosophy's new Amazing Grace collection. Bombshell Graphics provided the large-format printing, graphics, and branding used throughout the event.
Photo: Jean-Pierre Uys Photography 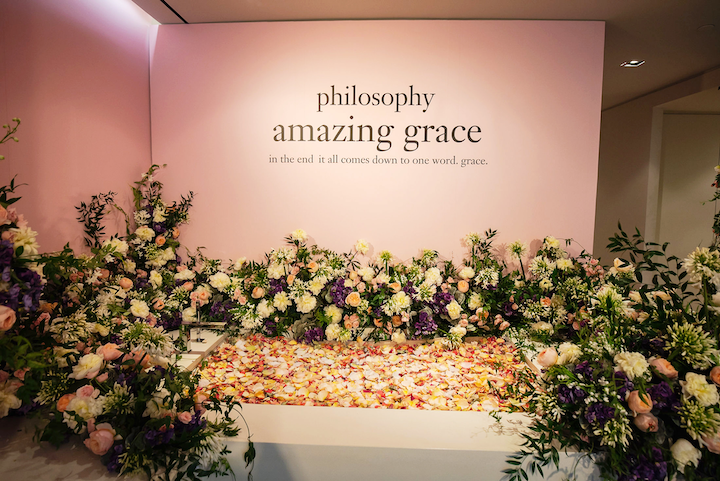 B Floral filled a bathtub within the venue with blooms for a floral-focused photo op.
Photo: Jean-Pierre Uys Photography
More in Event Design