Looking Back at E3: 10 Ideas From the Splashy Video Game Expo

The Electronic Entertainment Expo—better known as E3—brings big-name video game companies like Activision, Disney, Microsoft, and Ubisoft to the Los Angeles Convention Center every year. Here's a look at some of the splashy, tech-filled exhibits and press briefings that brands have produced over the years. 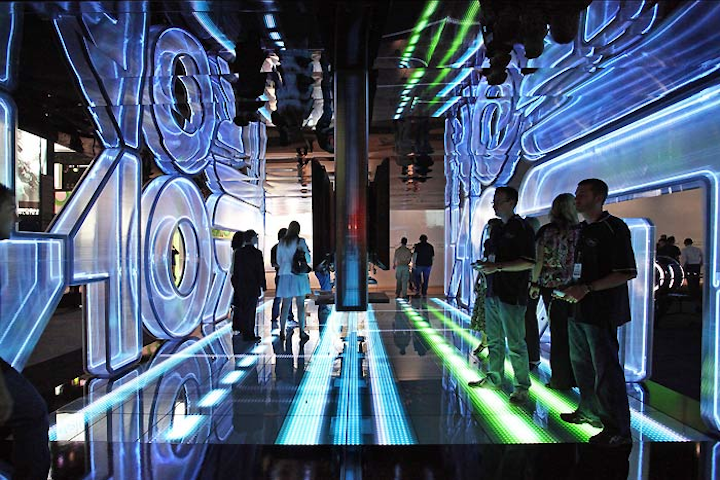 Disney Interactive Studios contracted Greco Decor for art direction and booth production for its exhibit in 2010 and a striking, larger-then-life structure called attention to Disney's title Tron: Evolution. Built as a series of illuminated letters spelling out "Tron," the platform included gaming consoles and stood next to a full-size lightcycle model. 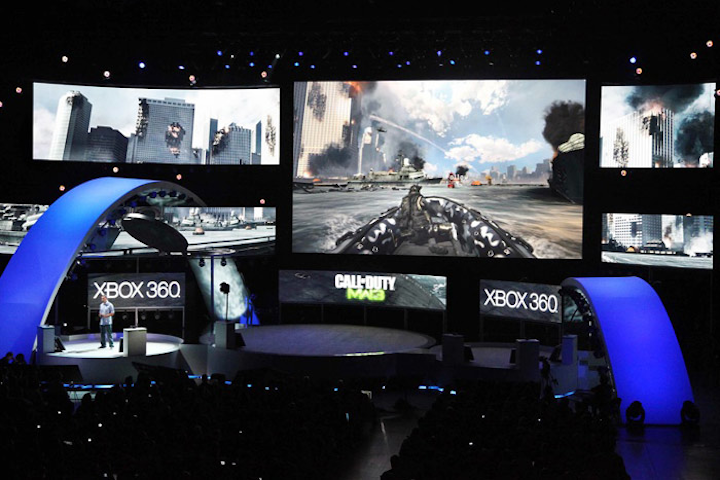 Known as one of the larger, more visually impressive events during the Entertainment Software Association's buzzy trade show, Microsoft's press briefing for its Xbox console regularly involves an immersive stage. Last year the show produced by Zed Ink and overseen by Microsoft's experiential marketing team had three functional demo stages and an eight-screen array with a central 40- by 22.5-foot high-definition screen. Held at the Galen Center, the gathering offered seating for 3,600, had a sound system with more than 250,000 watts of amplification, and was broadcast live and commercial-free on Spike TV, simulcast to Times Square, and streamed online. 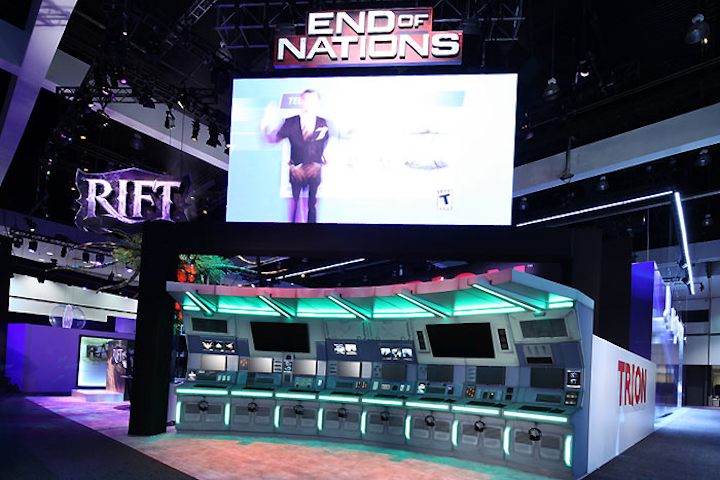 In 2011, a curved structure created by the Freddie Georges Production Group for the Trion End of Nations MMOG game gave the demo area an intimate and open feeling for players. Elsewhere in the exhibit were showcases for Rift and Trion as well as Syfy's TV and video game brand Defiance. 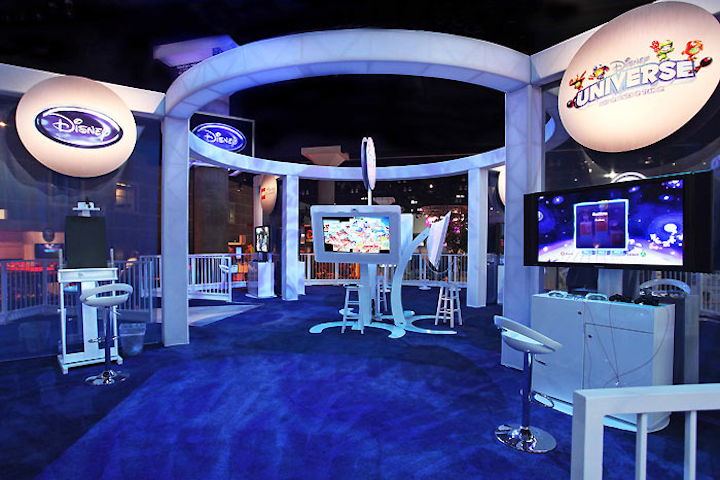 A dramatic 15,000-square-foot section housed the exhibit from Disney Interactive Media Group in 2011. Designed to simulate how consumers connect with the entertainment products in different situations, the booth was divided into environments styled after kitchens, living rooms, outdoor parks, and other settings. There was also a coffeehouse that offered coffee and entertainment provided by mash-up artist DJ Earworm, costumed characters, and Phineas & Ferb sketch artists, Greg Guler and Kyle Menke. 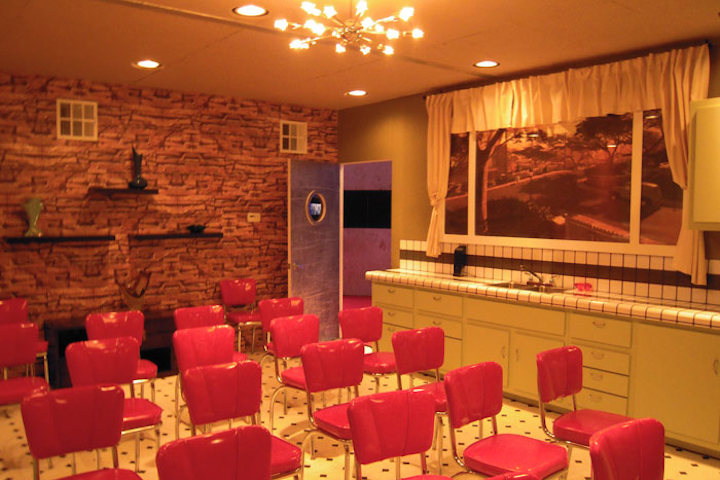 Stylized sets also dominated the look of the 2K exhibit in 2010, a booth produced and built by Freddie Georges Production Group. The different areas were designed around the genre of each title showcased, including a sports bar for sporting games, a theater for reimagined '90s strategy game X-Com, and a fairgrounds-like set up for New Carnival Games. 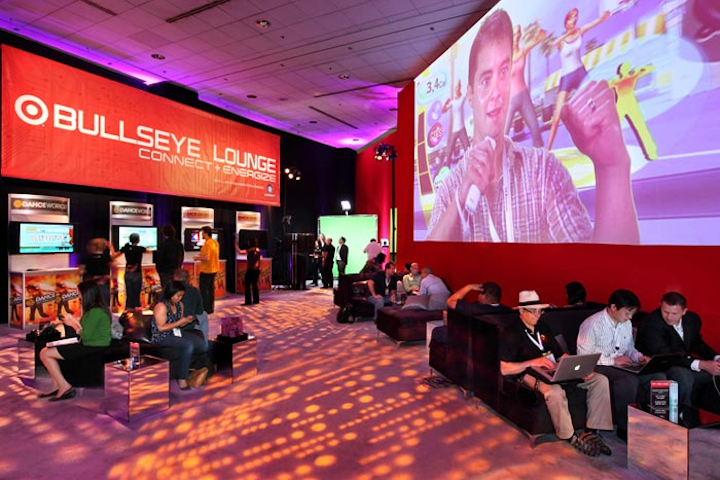 The retailer carved out a section of the Concourse Hall Foyer for its effort in 2010 and dubbed it the "Bullseye Lounge." Produced by Caravents, the space included a 20-foot video wall that showed a loop of logo-inspired graphics, gaming trailers, and guests photos, as well as booths for playing Ubisoft games. 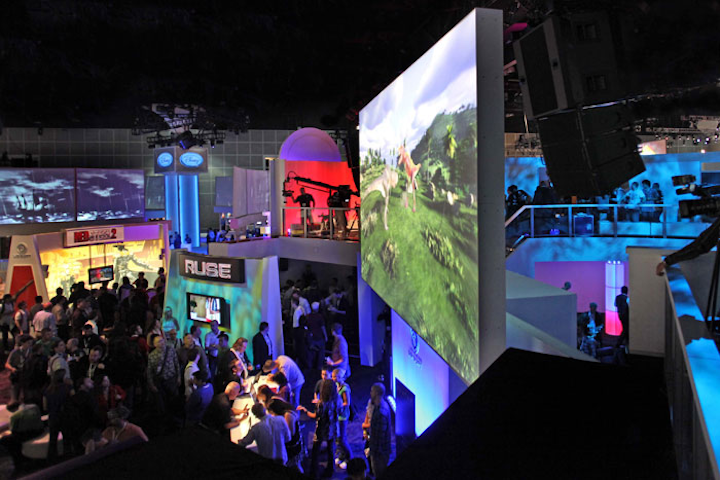 Under lead designer Armen Gharabegian, Ethos designed, engineered, fabricated, and built the massive 150- by 100-foot two-story booth for Ubisoft in 2009. Housed inside were private meeting rooms insulated from the show floor, curvilinear structures for gaming stations with an open flow, and a full-scale theater and lounge. 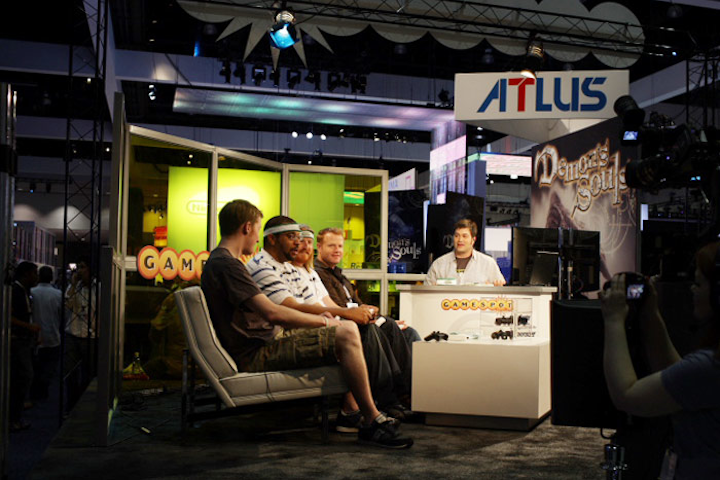 Before E3 offered a virtual platform that gave consumers a look inside the trade-only show, GameSpot had live-streaming video of every major press conference, plus continuous coverage of the latest game releases, news, and interviews with industry folks from the stage in its west hall booth in 2009. Freddie Georges Production Group produced, designed, and executed the setup, which put a news desk on an elevated platform backed by yellow plexi wall that revealed the show floor behind it. 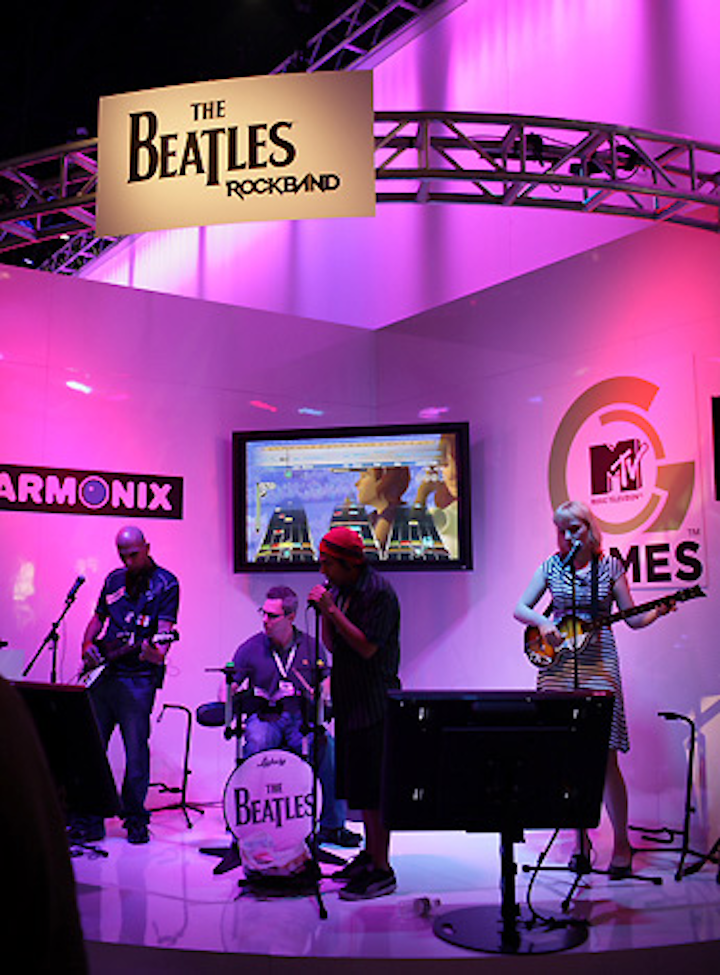 To promote the forthcoming release of The Beatles: Rock Band game, MTV Games created a booth for the 2009 expo that was designed to evoke the Fab Four’s storied Abbey Road Studios. The façade came complete with window box planters and blinds inside windows, plus a faux striped sidewalk in front. Inside the structure produced by Premier Displays & Exhibits, the brand did demos of the game. 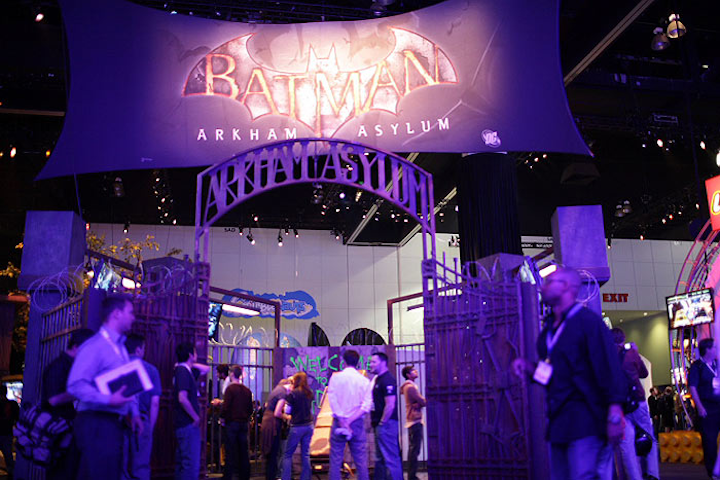 Filled with props and separated into thematic areas to highlight key titles, the 10,000-square-foot booth from Warner Brothers Interactive Entertainment looked more like a studio lot than an exhibit. Freddie Georges Production Group created sets such as a destroyed playground to evoke scenes from a F.E.A.R. game, and a Batmobile for Batman: Arkham Asylum, fabricating many items from scratch for the 2009 show.