The fashion house partnered with software supplier SAP to bring experiential retail to the catwalk. 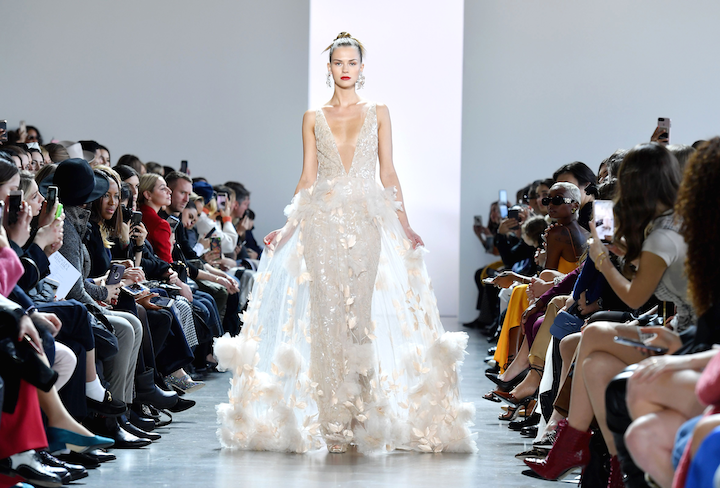 A model walks the runway during the Badgley Mischka show in February.
Photo: Angela Weiss/AFP via Getty Images

NEW YORK—Keeping the oftentimes fickle fashion world interested and engaged can be a challenge for any designer. And while some may view the ubiquity of mobile phones at runway shows as a distraction, American design house Badgley Mischka is using today’s tech to its advantage by embracing the concept of experiential retail.

For the fourth season in a row, the duo encouraged show attendees to download the Runway by SAP app at its Fall 2020 show, held at Spring Studios on February 8 during New York Fashion Week. 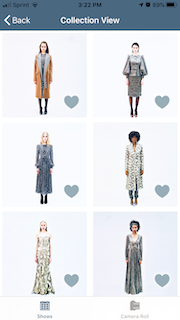 Users can view Badgley Mischka's Fall 2020 collection on the Runway by SAP app.Photo: Courtesy of SAPAvailable in the Apple store, the app allows the audience, as well as those watching via livestream, to participate by providing feedback on the runway looks (with “like” and “love” options), accessing detailed information on each item, and adding items to their wish list (users are then alerted when those items are available to order). Plus, there is an “Order Now” option to purchase previous collections.

“At the start, it was a very, very different app than it is today,” explained Christine Currence, president of Badgley Mischka. (Runway by SAP debuted at the Badgley Mischka Fall 2018 show and has also been used at the Christian Siriano Fall 2019 show.)

“In the beginning, the girls were wearing beacons on the runway and you would hold your phone up and as they walked past you, your phone would read the beacon and it would bring up all the information about that look and those styles. And at the time, it was hard to link multiple things. So if they were wearing a jacket and pants, it was difficult for [the phone] to pull up both things. And it was really just an experience for the people who were in the room, where now it’s an experience globally; it’s for everybody around the world.”

Currence said that for the first runway show, SAP needed images of each look in numerous ways—front, back, under different lighting, different angles, and close-ups—in order to “teach” the app how to read the looks. But now, thanks to advanced technology and machine learning, the app is able to recognize a look from just one image.

Along with capturing looks, the app is also capturing real-time audience engagement data from users, which helps the company sell more strategically. “It gives you a chance to see trends,” Currence said. “Do the stylists love one look, while the customers like a different look? It also gives you the ability then to go into market and sit down with our major retailers and say, ‘Neiman Marcus, this was rated the top look. This is a must-have on your order. This is what customers are going to be looking for in stores come fall.’”

She added that the app’s feedback allows for more educated buying decisions, since instead of relying on historical buying data, buyers are able to see forward-looking information.

In addition, attendee "likes" can translate into more inclusive and accessible fashion. There might be “a couture gown that gets a million likes on the app—however, we know we’re not going to sell a million couture gowns. The price point is just too exorbitant,” Currence explained. “But we’ve touched on something here. We need to redevelop this at a lower price point. This is what the customer is asking for. And because we offer so many different divisions at so many different price points, it gives us that flexibility to redevelop it.”

Sometimes, though, statistical data isn’t as powerful as star wattage. Currence said that one of the least-liked looks (according to the app) from the brand’s Spring 2020 show was a couture gown with voluminous balloon sleeves. But it was a stylist favorite, with many calling in the look for their red carpet clients. This Is Us star Susan Kelechi Watson ended up wearing the dress to the Emmys in September 2019.

The dress, which will soon be available in stores, will put the app’s reporting to a unique test: “After having gone down the red carpet and receiving so much press and it now becoming a trend, will that change the customer’s opinion of that dress?” Currence wonders.

Besides catwalks, Peter Akbar, global vice president and chief customer officer of fashion at SAP, said that there has been interest from brands about using the Runway by SAP app for other events such as car shows and trade shows, as well as in showrooms and exhibits.

“The app is useful to brands because it enhances a consumer’s experience and makes the brand more memorable to the consumer,” he said. “The app can really be used anywhere that consumers want more information about the products they are seeing; it provides a curated, in-person experience. It also gives the brand invaluable insight into potential consumer demand through engagement and sentiment data.”