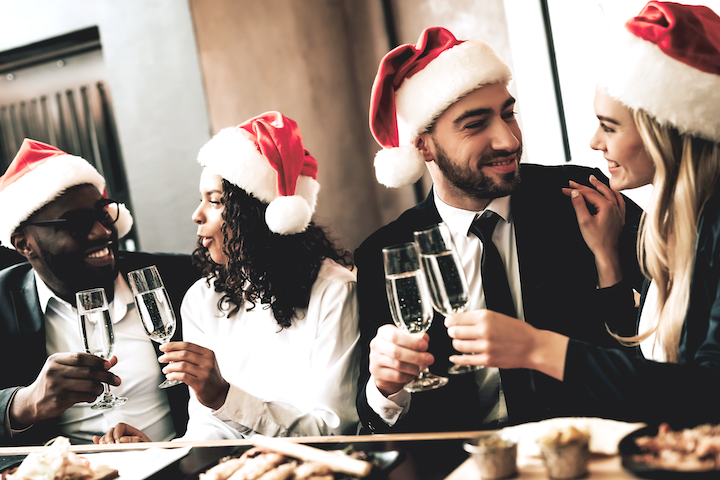 Sometimes activities (and some champagne) are needed to get guests talking.
Photo: vadimguzhva/iStock

How do you make a corporate holiday party engaging and fun without attendees feeling like it’s just another work obligation? It’s a question that the prettiest decor ideas simply can’t answer. So BizBash spoke to Tania Luna, co-C.E.O. of LifeLabs Learning, a manager development resource for companies such as Lyft, Venmo, and Warby Parker, and Hannah Dubin, group principal and founder of the Group Forward, a company that specializes in organizational development, about creating an experience that fosters interaction and camaraderie among attendees.

Get folks talking
“We are all human, and we all know that connecting with strangers is awkward,” says Luna, co-author of Surprise: Embrace the Unpredictable & Engineer the Unexpected. “We need a nudge in the right direction, and most people appreciate it, even as they grumble about it. So first and foremost, consider what will create connection even if it requires choosing a bit of courage over comfort.”

Dubin suggests using some type of “light intervention” activity like handing out human bingo cards that encourage attendees to talk to different people in order to win a prize or placing bright orange and blue stickers on the guests’ name tags: orange indicating “something I need help with” and blue signifying “something I could help you with.” “It gives people an intentional reason to chat,” she explains. “It might be easier for people to talk about [work] than themselves.”

Along those same lines, Luna recommends asking attendees to build their “tribes,” playing into our evolutionary trait of shared identity. Ask people to find others with their shirt or tag color or first initial. Or give them the mission of finding five people who have the same _____ as them (e.g., hobby, fear, food allergy). This could be taken a step further and turned into a challenge. For example, in order to get admission to the bar or photo booth you have to walk over with your newly found team.

Luna says that this kind of “forced” interaction is okay, but try to avoid being inauthentic. “Experiences feel cheesy when they don't match the culture of your company. Incorporate your style of play, inside jokes, and company history,” she suggests.

Add some surprises
Planners continue to keep guests on their toes with “surprise-and-delight” moments, and corporate holiday parties are no different. “Research shows we humans are subject to a primacy and recency bias. In other words, we remember how things start and how things end,” Luna explains. “Surprise amplifies our emotions by 400 percent, triggers connection, and makes experiences even more memorable. So, incorporate a surprise at the start and end of a party—bonus points for the middle too.” For example, hide small gifts under the chairs.

Don’t exclude people
Like other events, corporate holiday parties need to be inclusive and offer accommodations for all attendees—from bathrooms to catering. “As a vegan, I feel hungry and somewhat forgotten at most events. Or perhaps there are vegan options, but I can't tell because the food isn't labeled,” Luna says. “This is also a big challenge for folks with allergies. I have seen well-labeled, inclusive food bring tears to people's eyes.” Other things to consider: Are there non-alcoholic options that are just as fun looking as the alcoholic ones? Are there gender-neutral bathrooms? Will folks need any physical accommodations? “When in doubt, send out a brief survey asking what would make people feel most included at the party,” she says.

This also applies to the wallflowers. Luna says planners should avoid designing only for extroverts. “Consider the introverts and shy folks who will need your support the most. Conversation prompts, quiet zones, and activities are particularly helpful. You may even want to place a sign on bathrooms that reads: ‘Bathroom and Introvert Recharge Station.’”

Eliminate some chairs
When designing the layout of an event space, planners should think about how they can subtly and subliminally influence partygoers’ behavior with decor and catering. “Consider what primes [small cues on how to act] you can embed into your event,” Luna says. “For example, comfy couches or soft seats positioned in a circle will prime casual conversation. A fancy chandelier will prime more formal, professional interactions. As for food and drinks, put them in the center so people have no choice but to leave the safety of the walls and make their way to the middle where spontaneous collisions can happen.”

Luna adds that sometimes less is more when it comes to seating. “When we teach workshops at LifeLabs Learning, we intentionally do two things: have fewer chairs than people and make the chairs somewhat messy versus perfect rows,” she explains. “The impact is that people cluster together and connect more quickly with one another.”

Encourage people to attend
All the planning in the world won’t matter, though, if no one shows. So how do you encourage attendance? Luna says managers need to make it easy for people. “If you notice folks didn't sign up to attend, share why you care about them being there and ask if there are any obstacles you might help remove,” Luna says. “For example, maybe childcare is a concern. If so, consider having the event in the morning, during the workday, or even providing a childcare stipend.”

And if the party is mandatory, Luna says employers should leverage the “IKEA effect”—when we help make something, we like it significantly more. “Get people's input and give them ownership and responsibility where possible, even if it is just naming the event and picking the music.”

Dubin agrees, saying companies should establish an event planning committee that includes employees from different departments so that they can cross pollinate. By democratizing the process, you create more buy-in, she explains.

Employers can also build excitement by leveraging the power of anticipation, Luna says. For LifeLabs’ biannual retreats, “we start a countdown a month in advance, reveal small clues about what it will entail, and share photos and stories from past retreats. By the time the retreat comes around, people are literally squealing with anticipation.”

Don’t throw a party
For some companies, “holiday parties are not their jam and that’s OK,” Dubin says. Instead, plan a value-based event like a team volunteering experience. Also, if your company is entirely virtual, a traditional shindig just won’t cut it. In this case, try carving out time during the employees’ respective time zones and share a couple of cocktails via Skype.