3 Ways to Control Crowds at Events

The Anime Expo—the most densely populated convention at the Los Angeles Convention Center—continually implements solutions to handle its exponential growth. 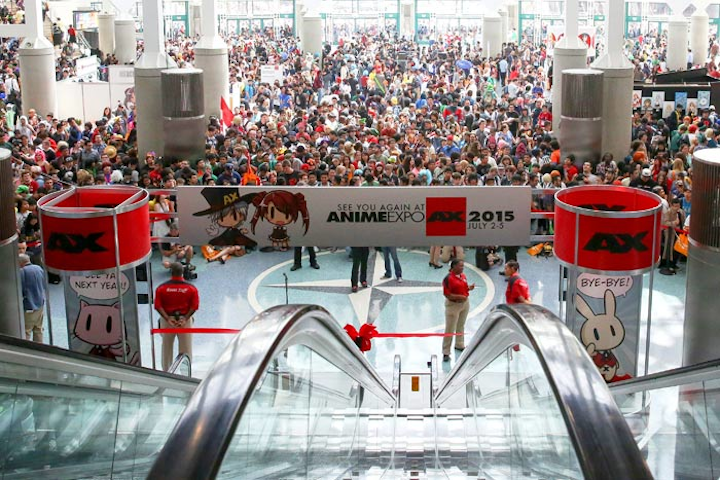 The Anime Expo bills itself as North America’s largest celebration of Japanese pop culture—as well as the most densely populated convention at the Los Angeles Convention Center. The biggest project managed by the Society for the Promotion of Japanese Animation, the show doubled from 40,000 unique attendees (and 105,000 swipes of the turnstiles) in 2010 to more than 80,000 (with 220,000 through the turnstiles) in 2014.

With such growth, the expo continually adapts to accommodate the massive throng. Specifically, organizers identified three problems caused by the show’s rapid growth and have put in place various solutions and modifications for each one ahead of this year’s installment, coming up July 2 to 5.

Problem 1: Large crowds caused the registration process to slow and crash.
Solutions: In order to create a smoother, faster process for badge pickup, the Anime Expo, together with Eventbrite, has increased the number of pickup locations. The organizers have also extended badge pickup hours to 36 hours straight from noon on the day before the event until 8 p.m. the next day. And the team has prepared for triple redundancy on the system equipment, and pre-printed plastic badges instead of using paper and plastic badge holders.

“All these updates streamline the process, cutting down the time for badge pickup to a matter of seconds,” says director of operations Ray Chiang.

Due to the longer processing time for on-site purchases (inputting payment and personal information takes longer than the scan-and-go process for badge pickup), the Anime Expo has increased on-site cash pricing to incentivize attendees to purchase before arrival or on their mobile devices.

Problem 2: The crowd overwhelmed the panel and screening rooms.
Solutions: The Anime Expo reevaluated and reorganized room allocations and line areas. The time required to clear large panel rooms takes away from potential panels and programming for industry partners. So organizers no longer clear the two largest rooms between panels.

Organizers will also streamline the movement of lines into rooms this year. “We’ve discontinued using upper-floor rooms that do not have any nearby space for lines for panels,” Chiang says.

Further, the conference has created spaces for attendees to “sit and enjoy themselves,” Chiang says. Upper-floor rooms are now larger lounge areas, and there’s a karaoke room where attendees can flow freely in and out. These rooms mark an increased focus on interactive programming for attendees exploring the convention between panels or taking breaks from the exhibit hall.

The Anime Expo is also working to spread out the crowds by utilizing all of the space in the Los Angeles Convention Center. This includes all of the South Hall for exhibits; the hall underneath for autograph areas and tabletop gaming, plus seating; as well as ballroom space in the nearby JW Marriott for video screening rooms.

Problem 3: Lines became long.
Solutions: With panel rooms that can only hold a maximum of 3,000, and an attendance of nearly 100,000, the reality is all attendees simply won't be able to see all panels. As such, the Anime Expo is working to manage expectations, communicating the message that attendees should expect lines for panels the same way they might at other large conventions such as Comic-Con.

In addition, organizers clearly mark out line areas with tape. “While other events may prefer to use stanchions, Anime Expo attendees have become accustomed to following the tape line system,” Chiang says.

Organizers have also created shoulders in the hallways. “Since our attendees are younger and tend to sit down on the floor quite often, we worked with the fire marshal to mark off the edges of hallways where attendees may sit down to rest,” Chiang says.

Additionally, the team switched mobile apps so they can see how many people have signed up for an event or panel prior to the expo.

Managing crowds also means coordinating carefully with multiple internal teams and volunteers, anticipating the demand for panels and planning accordingly. The crowd management team consists of both so-called “access control” volunteers and contracted security. About 300 volunteers undergo training prior to the expo to learn about their assigned zones and become familiar with the space. Since volunteers often return year after year, many become knowledgeable about the convention center and expo overall, adding to a streamlined experience for the crowd with each passing—and growing—event.