How To Handle Unruly Event Guests

When guests get out of hand or hecklers cause a scene at an event, here are ways to prepare and handle sensitive situations. 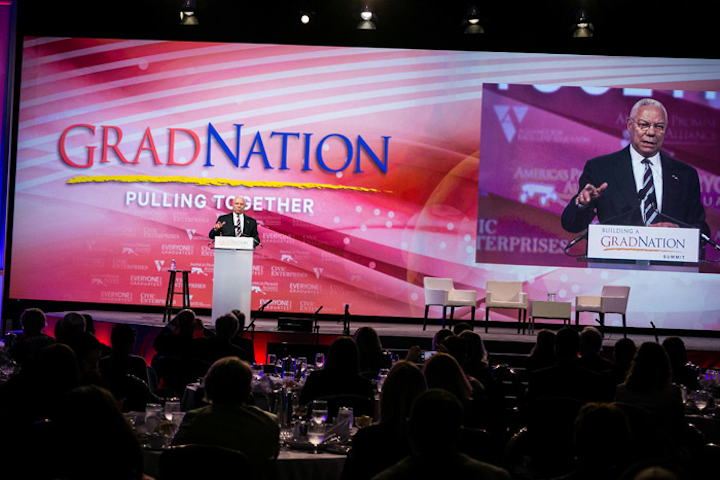 High-profile speakers increase the chances of hecklers and require extra research and security measures prior to the event.
Photo: Courtesy of America's Promise Alliance

The potential for disruptive guests or hecklers is present whenever you’re planning an event with an invite-only guest list, a high-profile or controversial speaker, or any gathering with alcohol service. Here are six ways for event planners to identify potential troublemakers prior to the event, and handle unruly guests onsite.

1. Ask hosts if there are any personal dynamics among guests that could be problematic. Then notify vendors and staff.
Office politics, and the interpersonal relationships behind them, can find their way into your event. It’s important to know about these up front so you can avoid potential minefields onsite, such as asking the C.E.O. and his daughter to pose for a picture when it’s actually his wife.

Once the issues have been identified, it’s important for any vendors who are working directly with guests to be notified of potential issues that could arise in their interaction with them. Michael Radolinksi, principal event planner at Michael Henry Events Creative LLC, creates a "sensitivity sheet" for vendors such as the photographer, photo booth staffers, and interactive entertainment.

“There is balance between giving vendors a heads-up and making a mountain out of a molehill, so you have to use good judgment so they are conscious of things that could be triggers for guests,” he says.

2. Plan ahead to block party-crashers.
Jessica Shea, founder of Alexandria, Virginia-based event styling firm J Shea, often plans invite-only corporate events at high-end restaurants that showcase her client’s products or destinations. These events include samples of the products and gifts for attendees, making invitations sought-after. She uses a two-prong approach to avoid issues at check-in such as unexpected guests or party-crashers.

“We essentially role-play and discuss the possible scenarios that could occur, so we are armed with each proper response,” says Shea. “Next we request that one person from our client’s team be easily available during the first hour of the event to consult, so they have the opportunity to decide if [the situation] is worth confronting or to just allow them entry.”

3. When dealing with a high-profile guest list, do your research beforehand.
Stacy Heit, director of communications and events for nonprofit Opportunity Nation, has spent more than a decade coordinating nonprofit events with prominent keynote speakers and attendees such as President Barack Obama, Vice President Joe Biden, former Secretary of State Colin Powell, and filmmaker George Lucas. She relies on pre-event research to predict potential problems.

“I look at my registration list and try to research who the potential troublemakers may be based on their affiliations and organizations they work for,” says Heit. “Then I print pictures and make sure security has those photos and background on who those people are so they can have eyes on them.”

4. For large events or those with a keynote speaker, uniformed security near the main stage or front of the room can serve as a deterrent.
“When you’re at a political event or one where a speaker may be controversial, I found that having a uniform security presence goes a long way,” says Radolinksi. “You don’t need one security guard for every 50 people, but if someone in the uniform is up front, it signals to guests that anyone unruly will be escorted out.”

Shea agrees. “Often hecklers are not there just to yell and cause disturbance. Once they get going they have the potential to get unruly or even violent, so event staff should not be the ones responsible for physically handling those people.”

In her past role as director of events for America’s Promise Alliance, for which Colin Powell was the chair, Heit often attended events with him and used security to remove hecklers. “Even if they weren't political events, people always had things to say to him about his political past, so there’s always an opportunity for hecklers.”

5. Opt for staff-held microphones during Q&A sessions.
As an event coordinator at Georgetown University, Elizabeth Powell has worked on events with speakers ranging from professors to multiple Supreme Court justices as guest lecturers. The events included Q&A sessions, which opened the door to unpredictable speakers.

"Instead of a standing Q&A with a mic at the front of the room, we had wireless handheld microphone runners who kept the mic in their hand at all times so they could pull it away if the question became inappropriate," says Powell.

6. Move intoxicated guests out of the room as quietly and quickly as possible.
When a situation arises at a smaller event where security isn’t necessary, a one-on-one approach works best.

“Try and give the guest a reason to leave the room so you can handle the issue privately,” says Radolinski. “I’ve used every technique from ‘Come with me so I can fix your bow-tie’ to ‘Someone wanted to talk to you over here’ in order physically remove them from the situation, particularly if they have over-indulged.”

Joseph Farahat, C.E.O. of David Josephs Special Events in New York, also uses distraction to diffuse an escalating situation. “Getting aggressive never works. Kindly ask them to come have a private drink or see a special room, then hand them a sparkling water and have a talk to calm them down,” he says. “It’s always easier to do one-on-one when they don’t have friends around.”

Once they’re out of the room, Radolinksi advises taking an emotional—rather than rational—approach, as the latter can often go unheard by someone who has over-indulged. “When emotions run high, reason doesn't work and only reinforces the existing viewpoint,” says Radolinski. "[My team] responds to emotion with emotion by making them feel heard and playing on their connection to the hosts if we need to to diffuse the situation."