Traditional state society balls and media events will mix with massive protests during a packed weekend in the nation's capital. 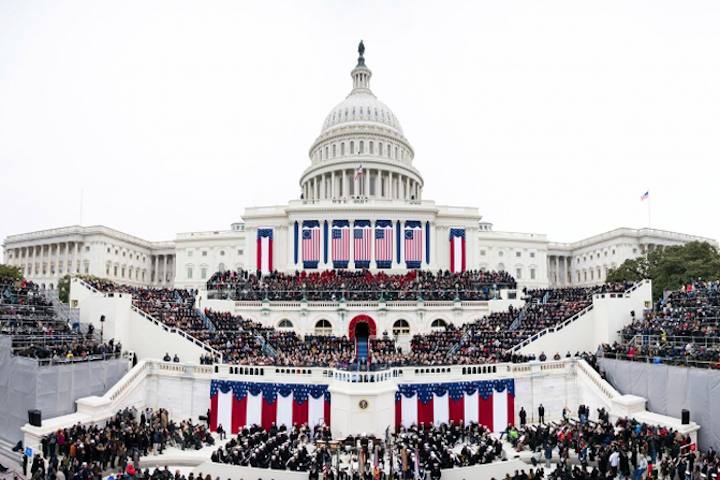 The swearing-in ceremony for President-elect Trump will take place at 11:30 a.m. Friday morning on the west side of the Capitol.
Photo: Official White House Photo by Lawrence Jackson

With President-elect Donald Trump’s inauguration just days away, details about the biggest events are still being hammered out. BizBash spoke with event producers, venue reps, associations, and other organizations hosting events in Washington for a sense of what the 58th Presidential Inauguration has in store.

The official events have a mix of the old and the new.
The official inauguration events begin on Tuesday with the 500-person, invite-only Chairman’s Global Dinner, which serves as the first opportunity for foreign diplomats and dignitaries to meet the incoming administration. Top supporters of the Trump-Pence campaign as well as the incoming cabinet are slated to attend.

Thursday will be the first new event to the official calendar with the Make America Great Again! Celebration at the Lincoln Memorial that afternoon. Unlike star-studded concerts in 2013 and 2009, this year’s event is notable for the performers who declined to participate. On Friday, the Presidential Inaugural Committee announced a list of performers and special appearances, which includes country singer Toby Keith, rock band 3 Doors Down, actor Jon Voight, and singer Lee Greenwood. The event is set to be broadcast live.

The swearing-in ceremony will take place at the Capitol on Friday at noon followed by a parade up Pennsylvania Avenue to the White House. The parade will include more than 8,000 people from 40 groups around the country.

Friday evening will see three official balls—a contrast to the 10 official balls for President Barack Obama’s first inauguration and two in 2013 after his re-election. The Liberty Ball and Freedom Ball will take place at the Walter E. Washington Convention Center, and the Salute to Our Armed Services Ball will be at the National Building Museum. On Saturday morning, the first families are slated to attend the National Prayer Service at Washington National Cathedral.

New groups are hosting events.
The number of and hosts of ancillary events and unofficial balls has shifted. Many vendors and venues noted that more than half of the pending contracts they had prior to election night were canceled the next morning, with new interests coming in with shorter timetables for production.

“I had 23 inquiries before the election and as of the next morning, 21 had pulled out,” says Shaun Hart, associate director of bookings and partnerships for The Shakespeare Theatre Company and Sidney Harman Hall. “It was a drastic turnaround. We’ve since then seen close to 20 new [inquiries] come in from groups that weren't doing something and now they want to.”

Among the new hosts is issue advocacy firm Goddard Gunster and British politician Nigel Farage, a prominent Trump supporter who led the Brexit campaign, hosting a rooftop reception at Top of the Hay at the Hay-Adams Hotel on Thursday evening coordinated by Will Milligan Events. That event will see decor and catering that represents both the United States and England, with the flags of each country in tabletop centerpieces as well a menu of classics such as fish and chips.

Protest events expect a large turnout.
Probably the most widely-known of the protest events is the Women’s March on Washington planned for Saturday morning on the National Mall. Estimates put the expected attendance around 200,000 people, including more than 30 women’s and minority advocacy groups, plus an additional 450,000 estimated to participate in some 370 protest marches planned around the world.

The march will culminate with the Laugh, Dance...then Get to Work! after-party at the 9:30 Club co-presented by Funny or Die. The sold-out program includes a mix of comedy and music, with proceeds from the $100 ticket benefiting Planned Parenthood.

Another anti-inauguration event that came about post-election is the Rise Above Conference. Hosted by Lawyers for Good Government, an advocacy group of lawyers that sprouted out of a Facebook group formed after the election, the inaugural conference on Saturday afternoon following the Women’s March as well as all day Sunday will include TED Talks-style programming, issue-focused workshops, and panel discussions.

“The purpose of this conference is to give the newly engaged activists some tools and training to move forward with helping to preserve the things in government [they care about] and keep government good in light of new concerns with the focus of incoming administration,” says Michael Radolinski, principal event planner at Michael Henry Events Creative, who has coordinating the two-day event taking place at the Lincoln Theatre and the Mayflower Hotel.

Radolinski notes that the original conference plan of 300 people more than doubled to 800 overnight, a similar rise to the Facebook group’s growth that started with 20 people, then reached 6,000 within two days and 123,000 members within two weeks.

Nonpartisan events and activations will return.
The local NBC affiliate will set up at Bayou Bakery's Capitol Hill shop on Friday for its taping with a roundtable setup and more live coverage and discussion throughout the day. In a similar fashion, Politico will take over the top floor of the W Hotel, including POV Lounge, to recreate its Politico Hub activation seen last year during the Democratic and Republican national conventions. There will be live programming throughout the day as well as activations from sponsors Samsung and Pepsico.

State societies from Texas, Iowa, Georgia, New York, Michigan, and South Carolina will all host balls this year. Texas’s 10th Black Tie and Boots Ball will return to the Gaylord National Resort on Thursday with four rooms of live music, celebrity appearances, and decor from Design Foundry paying homage to postcards of a Texas road trip. Rather than showcasing the wares of Texas retailers as in the past, this year’s event will focus on interaction and guest engagement like autograph signings in a sports bar-theme room and hat fittings by new sponsor Stetson.

More than 8,500 people are expected, which is about 5,000 people more than in 2013 and 1,000 more than 2009, according to event producer Julie Wadler, president of Epiphany Productions. “We sold 1,000 tickets within 24 hours of the election,” says Wadler. “I was surprised how well we did with sponsorship, too, even with the conversations about no one giving corporate money if Trump won. That has not been the case.”

The National Portrait Gallery will be the site of three inaugural balls beginning with the South Carolina State Society on Thursday, followed by the Dardanella Great Gatsby Ball on Friday and Washingtonian magazine’s ball on Saturday.

Wadler is also producing the Agricultural Ball, often referred to as the Piggy Prom, which is is expected to sell out with 1,400 people at the Grand Hyatt Washington on Saturday evening. The event, which was nearly sold out before election day, has expanded its footprint by adding a V.I.P. area in the second-floor ballroom to accommodate additional interest.

Correction: Morning Joe will not be taping at Bayou Bakery as originally reported.