Susan Tercero shares how the balloon lineup is chosen, how she celebrates with her team, and how technology is modernizing the 93-year-old parade. 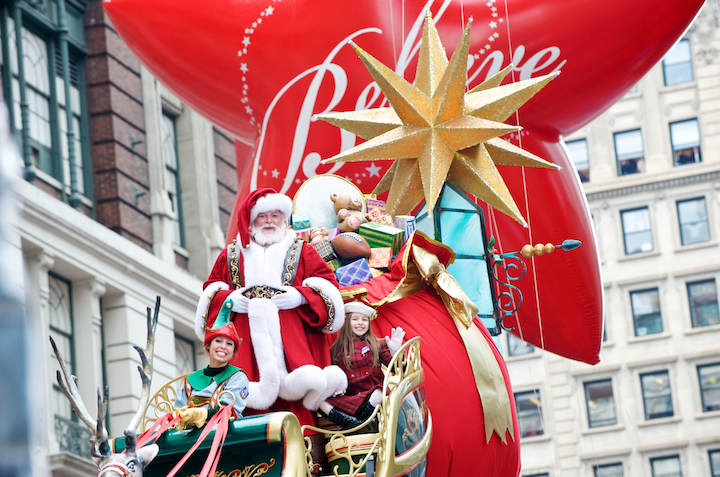 "The unique thing about our parade is that it’s three hours long and Santa has to make it to 34th Street at noon," Tecero says.
Photo: Kent Miller Studios

NEW YORK—With nearly 60 balloons, 26 floats, 11 marching bands, and 8,000 volunteers, the 93rd edition of the Macy’s Thanksgiving Day Parade will put the focus on digital and diversity more than ever before. Among the new features this year are balloons that celebrate anniversaries: Yayoi Kusama marks the artist’s 90th birthday, Smokey Bear and SpongeBob turn 75 and 20, respectively, and Snoopy is heralding the 50th anniversary of the moon landing.

Now in her second year as executive producer, Macy’s veteran Susan Tercero knows the eyes of the nation will be squarely on the work she and her team have spent the last 18 months planning. “What we focus on is less about the designs being Instagram-friendly and more, 'What are the moments that create Instagram moments?'” she says. Tercero spoke with BizBash ahead of the classic holiday event.

How do you go about balloon selection each year?
People express their love for certain balloons and we always try and find a way to bring them to the sky. And while Smokey Bear is a vintage balloon, you have things that have never been in the parade before but are recognizable like Green Eggs and Ham. The very well known Dr. Seuss story is coming to life in a series on Netflix, but now everyone gets to see it in the sky. In choosing the final lineup, a lot goes into the timing of things—what does the audience want and what is that one piece of our balloon puzzle missing that year.

What’s also new is that luxury aspect, soon to be filled with leather goods maker Coach and the debut of their first float. 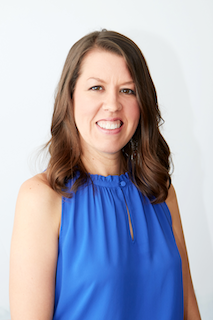 Susan TerceroPhoto: Courtesy of Sunan Tercero
Coach came to us with the idea of getting a float in the parade. It’s a great match with a very recognizable brand that we also sell at Macy’s, but Coach is also being more playful with their marketing lately and I think that really was what made it an easy decision. This particular float was fun to make because they were willing to be playful, and for us, our number-one priority is entertaining.

And how did you marry both the visions of Coach and Macy’s?
The design process starts with working with partners to understand what their initiatives and visions are. Coach expressed to us what they loved most about their brand, including Rexy and the stagecoach. We really wanted this fantasy world where Rexy was traveling through a cityscape pulling that coach along. The creative was largely driven by Macy’s design team, but it’s a collaboration with the partner to make sure we are doing things in line with their vision for their brand.

Is luxury an untapped sector Macy's plans to tap more into? Putting prestige alongside entertainment value?
We’re very open to having these great recognizable brands that are certainly helpful in telling our story, but anything we feel like will resonate with the audience, any partnership we feel like will help us tell these entertaining stories and have them come to life in a very unique way, is really what we’re after. … It’s about being able to entertain and celebrate these pieces of our lives across the country, be it luxury, entertainment, or consumer mainstream.

Talk to me about the strategy behind staging the floats.
We do have a sweet-spot number for balloons, but we also have conversations about balloons we’d like to see and are fortunate enough to have a lot of people come to us wanting to put their characters in the sky. Every year it fluctuates; some years we get a lot of characters celebrating anniversaries and other years we get some really unique characters that haven’t been there yet. There are logistic and creative concerns that come into play, and it’s a puzzle we start piecing together in the spring once we really know all the elements. It goes back and forth between the creative, the logistic, and the production teams. And then it all has to match into a broadcast. The unique thing about our parade is that it’s three hours long and Santa has to make it to 34th Street at noon.

What did you learn from your first parade as executive producer?
A lot of people may know this but a lot of people may not: Macy’s doesn’t just write a check. This is all produced, designed, and built by Macy’s employees. What I’ve always known, but being in this position has really taught me, is the passion the team has behind it, the talent the team has to putting it all together is what makes it great every single year. After last year, we asked ourselves, “So how do you go from that to the next year?” It’s challenging, but we managed to figure out a few things that I think the audience will be surprised and happy to see.

What are your biggest challenges as you approach parade day?
The biggest challenge is that it is a live event that happens rain or shine. You can’t plan for everything that’s going to happen, but you can plan for how you’re going to communicate it and how you’re going to make the decision to troubleshoot for it. So, if everybody understands their role and they’re empowered to make the appropriate decisions, then when you have things that happen that are out of your control, you know there is a plan of action in place to solve it.

How does the parade stay modern and relevant in this fast-paced world?
Because it’s such a longstanding tradition, there are pieces of the parade that are sacred to the fans—be it the balloons, bands, or performances—there are pieces that we know just work and we don’t change. We look at what we’d like to see in the future and how do we start making those changes now. Some of that could be in our parade studio designs; we’ve introduced not only 3-D software but 3-D printing components to streamline the process. We’ve been sending staffers to conferences to gain insight on what newness we can introduce to our team. Augmented and virtual realities are technological advancements we’re now anticipating applying to future parades.

Specifically, what's planned in terms of technology at this year’s parade?
Moving on from traditional 2-D sketches, with their clay models, adjustments, hard coats, and final build, with 3-D printing—it’s designed straight on software and getting signed off on electronically. Creating a 3-D print instead of a sculpt saves a lot of time, resources, and weight, making it easier to produce and move. In terms of the Kusama balloon, that’s exactly what we did specifically with the artist and her studio in Tokyo. We patterned and built her entire balloon online, off 3-D, from which we then painted in-house.

As for the future of the parade?
What I’m really focused on right now is finding more elements of that innovation, finding that next level, that next iconic piece of the parade. Everyone knows we have the floats and balloons, but what will be the next element we create that you can only get at the Macy’s parade? Because everything we do is larger than life, spatially, that’s been a big challenge. The other element I want to move forward is our celebration of diversity (2018 saw the parade’s first televised same-sex kiss). From Billy Porter performing with Coach; to NCT 127, our first-ever K-pop group, paired with Lego; to Ozuna, one of the most viewed Latino artists on YouTube in 2018—these may not be household names to everyone, but there’s a good chunk of the population that is going to be really excited to see them.

How do you unwind after the parade?
The day after the parade, we have a special tradition where all of the team’s families gather in the parade studio in New Jersey for a big Thanksgiving dinner. Our families get to come together and celebrate everyone’s hard work, and that’s how we unwind. It reminds you what the important parts of doing this are: coming together with our families, as a family. 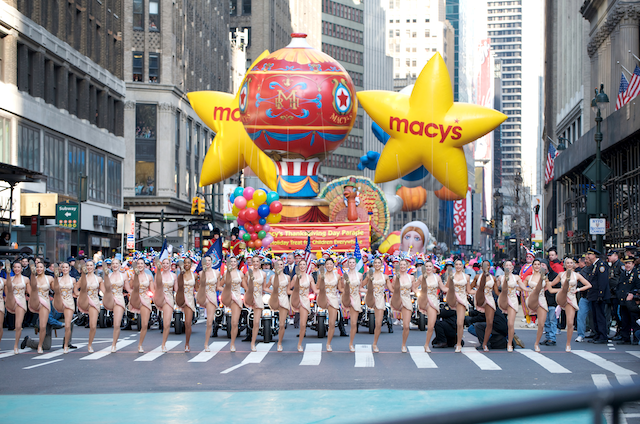 Precision dancing by the Rockettes is another tradition of the parade.Photo: Kent Miller Studios