The L.A.-based firm behind the official Oscar and Emmy after-parties installed tiered seating in the Sheraton Centre\'s ballroom and decorated it in gold, silver, and blue for the inaugural Canada\'s Walk of Fame inductee ball.

Although movie stars in town for TIFF may be the talk of Toronto, fans lined the streets to see famous Canadians Saturday night as they walked along a red carpet to the first-ever Canada's Walk of Fame inductee ball. Held in the Sheraton Centre Hotel ballroom, a block away from the awards presentation venue, the Four Seasons Centre for the Performing Arts, the ball received an elaborate seating and design treatment from Sequoia Productions, an L.A.-based event firm that produces the Governors Ball for the Academy Awards and Emmys.

"There has always been an after-show party, but never as grand and celebratory as this," said Peter Soumalias, president and C.E.O. of Canada's Walk of Fame. "We've brought in the best event team in North America to execute the ball and one of the best known Canadian companies, BlackBerry, to sponsor it." Soumalias tapped Sequoia Productions' Sudbury-born president, Cheryl Cecchetto, after one of her old acquaintances, Perry Dellelce—who is on the Canada's Walk of Fame board of directors—suggested her company.

Although the inductee presentation has regularly been held in June, Soumalias was having trouble finding venues that would allow enough time in advance for the set-up. A cancellation at the Four Seasons Centre prompted Soumalias to move the date to September 6, which happened to be the opening weekend of the film festival.

Soumalias said the date change turned out to be a "blessing," thanks to increased media attendance (especially international media) and a better television audience for the awards (the presentation, hosted by figure skater Kurt Browning, aired Sunday on CTV). The lineup of inductees, which included model Daria Werbowy and director James Cameron, also drew attention to the gala and ball.

Going for a look that combined old Hollywood glamour and contemporary design, the Sequoia Productions team, along with the help of Vancouver-based Dekora Event Design, dressed the Sheraton ballroom in gold and silver with flashes of bright blue in the lighting and accent pieces. The most notable production feat of the evening, however, was bringing in tiers—built by Presentation Services—to divide the ballroom into three levels. Cecchetto (who couldn't make it to Toronto due to her workload on the upcoming Emmy Awards) said tiering a room gives it height and breaks up the space so it's not a "sea of tables." The second level, elevated two feet above the floor, held V.I.P. attendees, while the tables on the third level—raised three feet from the second tier—were reserved for the inductees.

Along with the decor, Cecchetto and Sequoia Productions vice president Gary Levitt wanted to bring first-class food to the ball. They collaborated with  staff at the Sheraton Centre and Pusateri's to bring a locally sourced dinner menu and a variety of antipasti—including smoked salmon pizzas, grilled vegetable towers, and beef carpaccio—which was placed on the tables as guests arrived just after 8:30 p.m. After dinner, white velvet curtains outside the ballroom opened to reveal an Allstream-sponsored lounge and a black-and-white Chanel lounge that housed a dessert station with treats like mini peach tartlets and espresso crème brûlée.

Keeping with the Canadian content at the event, Cecchetto arranged for Vancouver native Norman Roper and his orchestra to play throughout the evening on a custom 24- by 36-foot stage. (Roper often plays at other events Cecchetto plans, including the Academy Awards Governors Ball.) Toronto pianist Stephan Moccio also performed for the 1,000 guests at the event. 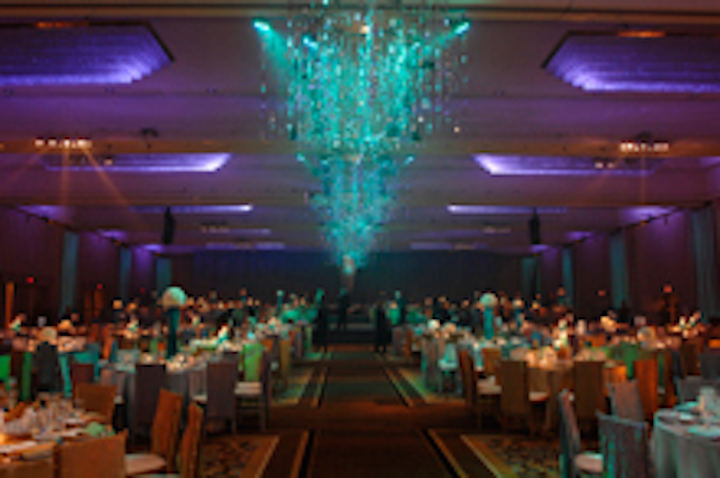 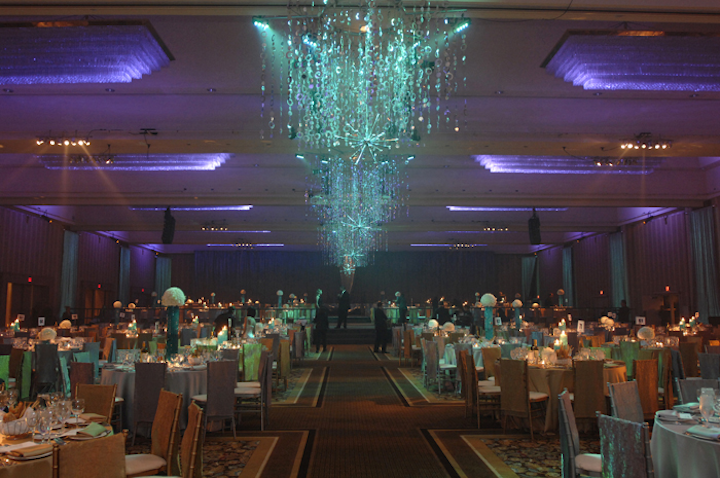 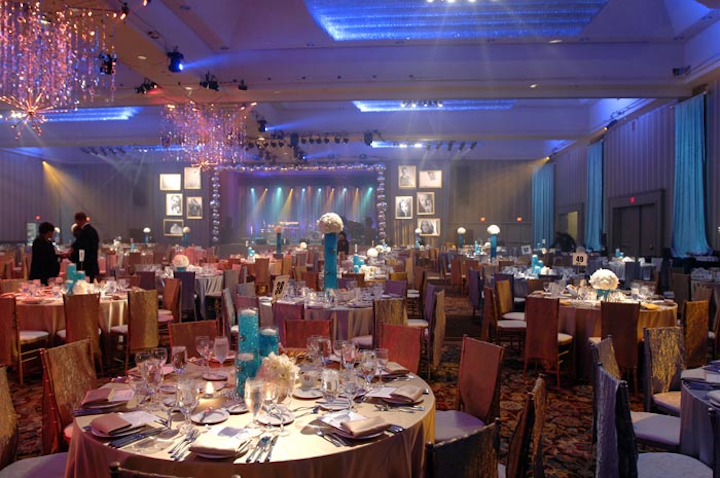 A mixture of high and low centrepieces and gold and silver satin linens gave variety to the room.
Photo: Gary Beechey for BizBash 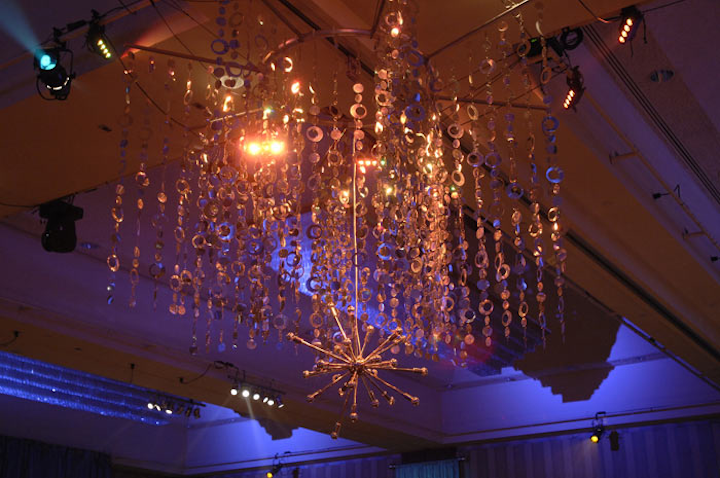 Hanging mobiles reflected the gold, purple, and blue lighting that changed throughout the evening.
Photo: Gary Beechey for BizBash 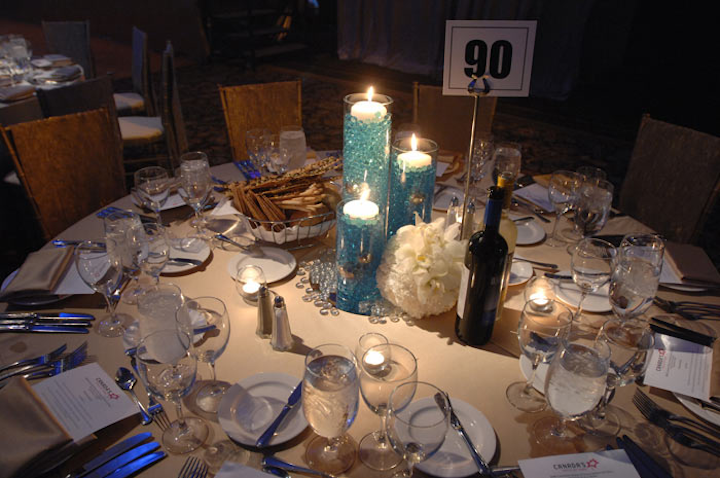 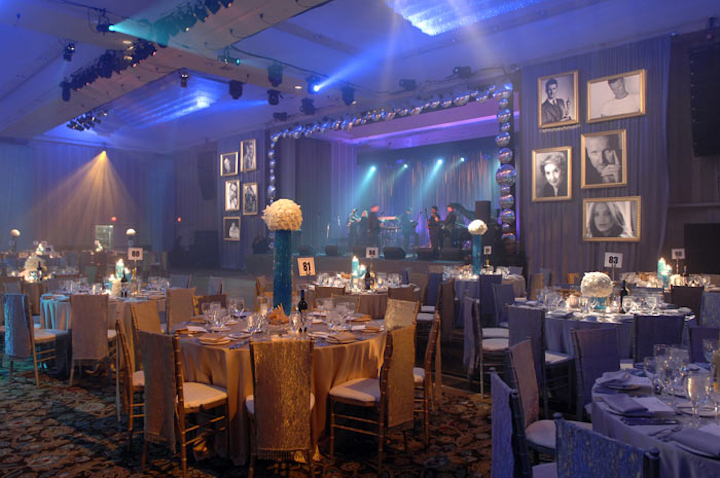 Mirrors of various sizes and gold-framed photos of the eight inductees brought attention to the stage.
Photo: Gary Beechey for BizBash 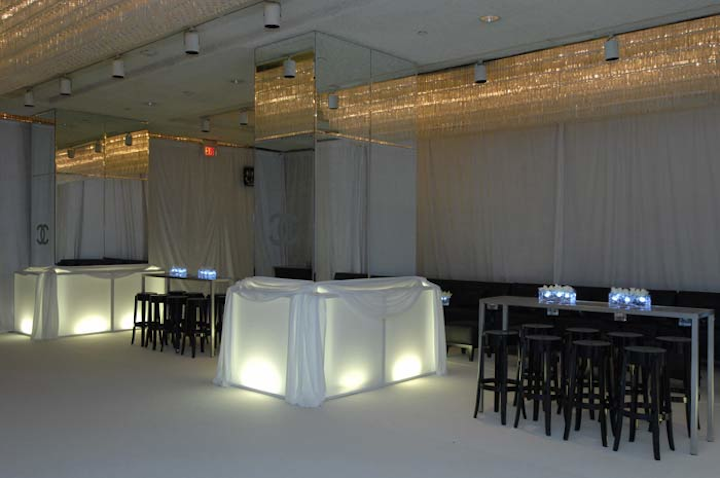