This Is It Premiere Sprawls Over L.A. Live With Aerialists, LEDs, and Fans Galore

In his life and death, Michael Jackson was a larger-than-life figure, surrounded by seemingly limitless pomp and glitter. Appropriately then, the premiere for the movie culled from his final rehearsal footage, Michael Jackson's This Is It, was an event that fit into the same category, and conjured its own mystique and energy in a bustling, fan-mobbed downtown Los Angeles Tuesday night. Columbia Tristar Marketing group senior vice president for special events Alison Bossert, along with executive director Mary Powell and manager Dori Golod, oversaw the event, with production by 15/40. "It was the premiere event of the season," Bossert said.

The spectacle began with arrivals on the Nokia Plaza at L.A. Live. The atypical setup felt more like a stage than a standard arrivals line: Instead of the usual carpet, a red laquer dance floor lay underfoot, inset with video and lighting elements to evoke Jackson's iconic "Billie Jean" video. Dancers from the planned tour, known as the "Crystal Divas," performed an aerialist routine overhead in Swarovski crystal costumes and chandeliers. Glass cases displayed costumes from the intended tour, some unfinished. Video elements and LED screens surrounded the area, and a fan pit in the middle emanated energy. Craig Waldman of 15/40 described the scope of the arrivals scene as "like an awards show." About 200 photographers and 120 television crews lapped up the coverage.

Guests moved inside the Nokia Theatre for the screening promptly before 6 p.m. An on-time start (highly uncharacteristic of movie premieres) was essential because portions of the event were satellite simulcast around the world to other premieres in 17 cities. About 5,500 guests viewed the movie—the theater has a capacity of more than 7,000 but the inclusion of a movie screen necessitated removing some seats without sight lines—which gave a glimpse into the late star's rehearsals at the Staples Center, just across the way. Kenny Ortega, the director of the stage show and the film, was in attendance, along Mayor Antonio Villaraigosa, Paula Abdul, and Will Smith, plus brothers Jermaine, Marlon, Tito, and Jackie Jackson.

After the screening about 3,500 of the 5,500 guests moved in a tightly packed line to the party at L.A. Live's sweeping event deck. (The other screening guests were fans who had won their movie passes in a radio promotion.) Performers danced on truss bridges overhead and throughout, and a central bar moved like a giant turntable.

The costumes formerly displayed in the arrivals area moved into the party space, where chain curtains surrounded them. Video walls and screens—including an LED-screen-wrapped column—added visual drama, and DJ Bizzy spun works by Jackson, plus his influencers and influencees. Guests lip-synced Jackson tunes as they milled about the vast tented space. "It's all about the music and dance—it's all about an homage to Michael Jackson," said 15/40's Travis Jackson of the party, which used about a third of its footprint for a dance floor. "It's visual, it's sensory overload. And it's a highly technical show." Bossert added, "The element I absolutely loved at the party is the rotating bar. The idea was for it to look like an LP—everything was Michael. It was all about a celebration of him, as the movie is, too."

The party got a look in black, white, and red and plenty of metal and exposed trussing. The raw, metallic look was meant to evoke a concert stage and backstage area. Guests entered the space from sets of stairs that offered vantage points from which to survey the whole look—beginning with giant light-up letters that spelled out the film's title. Inside, Ultimat provided a photo station for takeaways in cardboard This Is It-logo frames

Adding to the manic downtown scene was a season-opening game between the Lakers and Clippers at the Staples Center, tipping off at 7:30 p.m. "[L.A. Live and Staples owner] A.E.G. has been very good with us. We staggered the premiere, so it went on exactly at 6 p.m. [avoiding conflict with the game]," said Bossert. Further, at 9 p.m., all 14 screens at the new Regal Cinemas at L.A. Live showed the movie as well, serving as the debut of that much anticipated new venue. 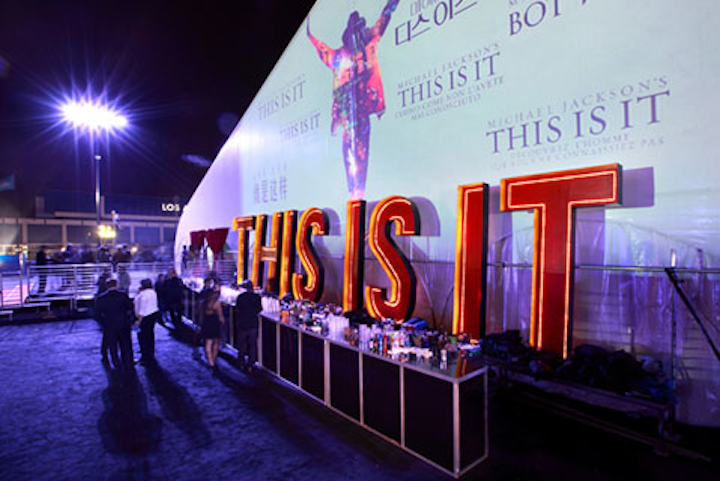 The entrance to the tented after-party
Photo:  Line 8 Photography 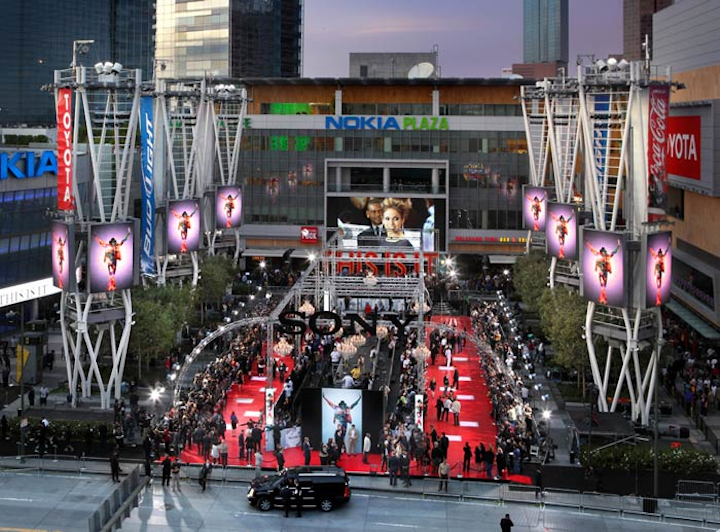 The premiere for Michael Jackson's This Is It took over L.A. Live, including a sprawling arrivals area on the Nokia Plaza.
Photo:  Line 8 Photography 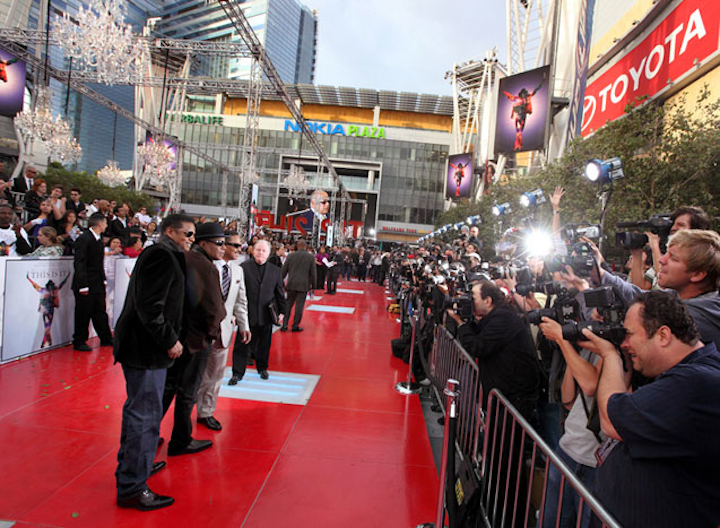 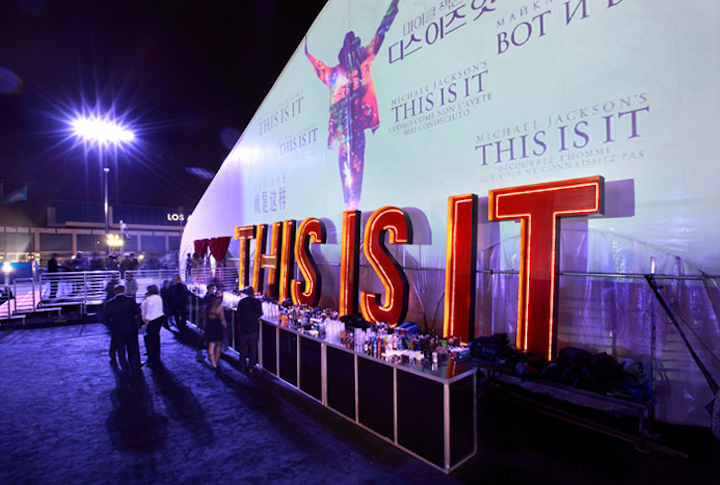 Giant letters that spelled out the film's title decorated the entrance to the tented after-party space.
Photo:  Line 8 Photography 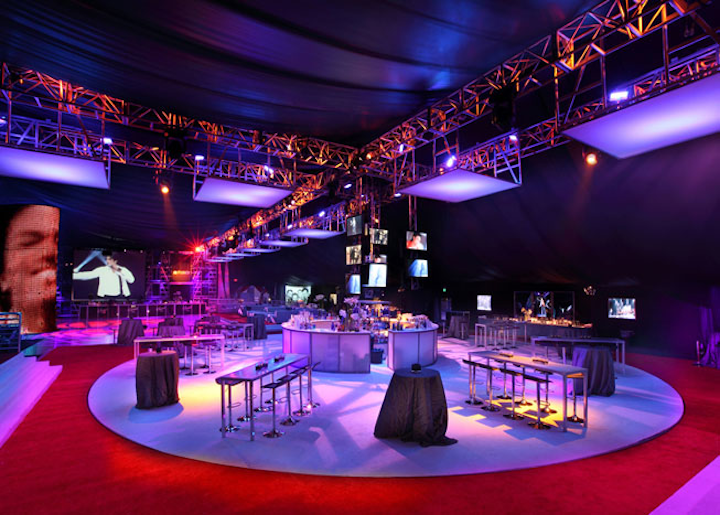 A central bar at the after-party mimicked the look of an LP.
Photo:  Line 8 Photography 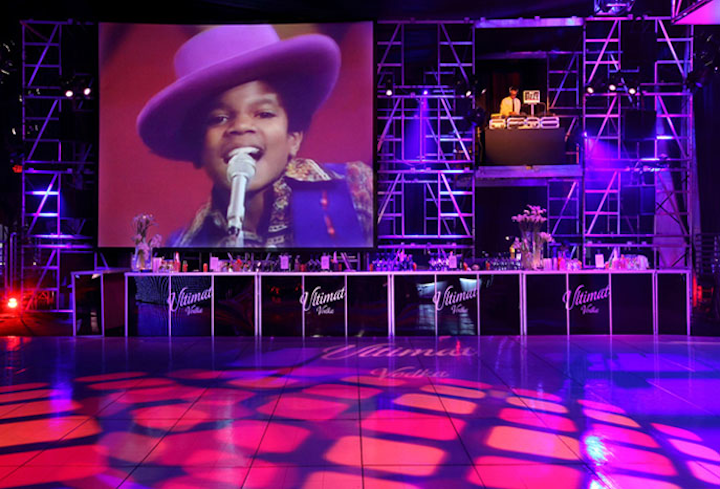 The after-party was a video-rich space, with screens and effects throughout.
Photo:  Line 8 Photography 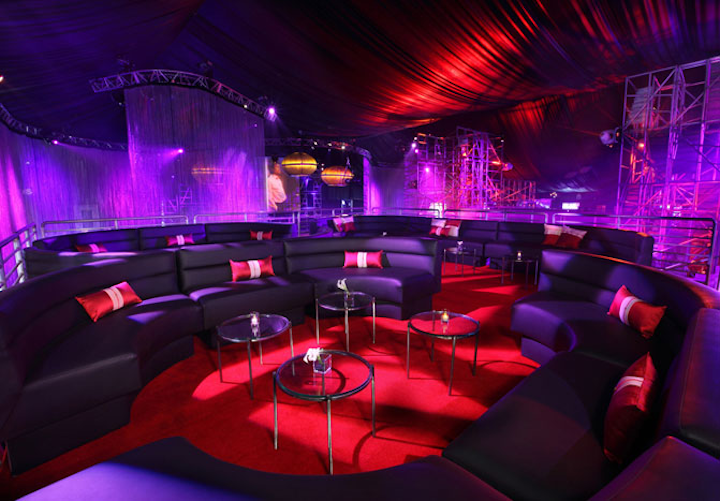 The tented after-party got a look in mostly black, white, and red.
Photo:  Line 8 Photography 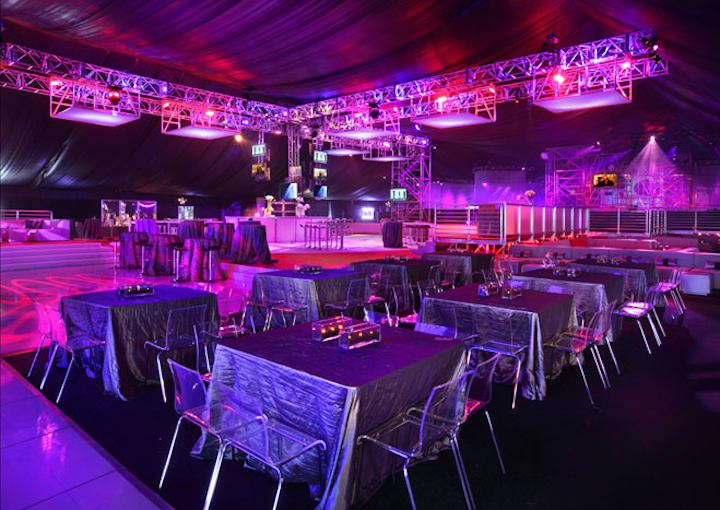 Exposed metal at the after-party simulated the raw look of a concert stage and backstage area.
Photo:  Line 8 Photography 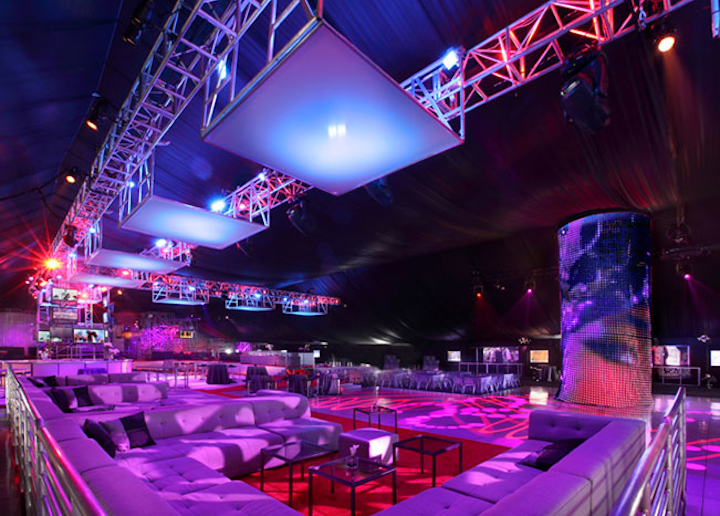 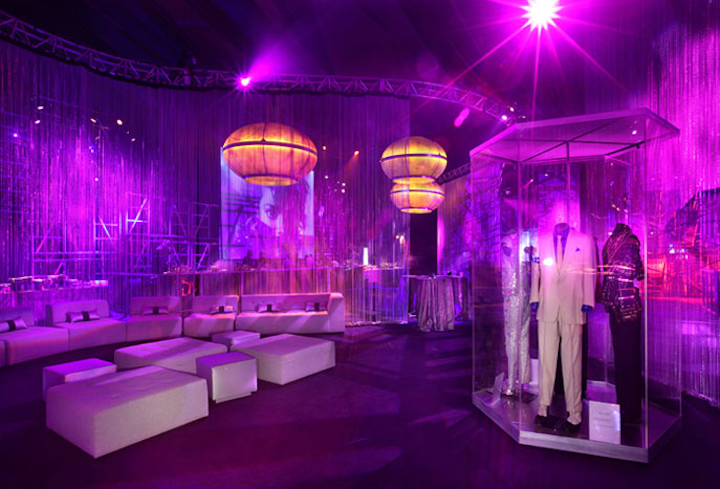 Tour costumes, which had been on view at the arrivals area, moved to the party space; a curtain of metal chains surrounded the case.
Photo:  Line 8 Photography 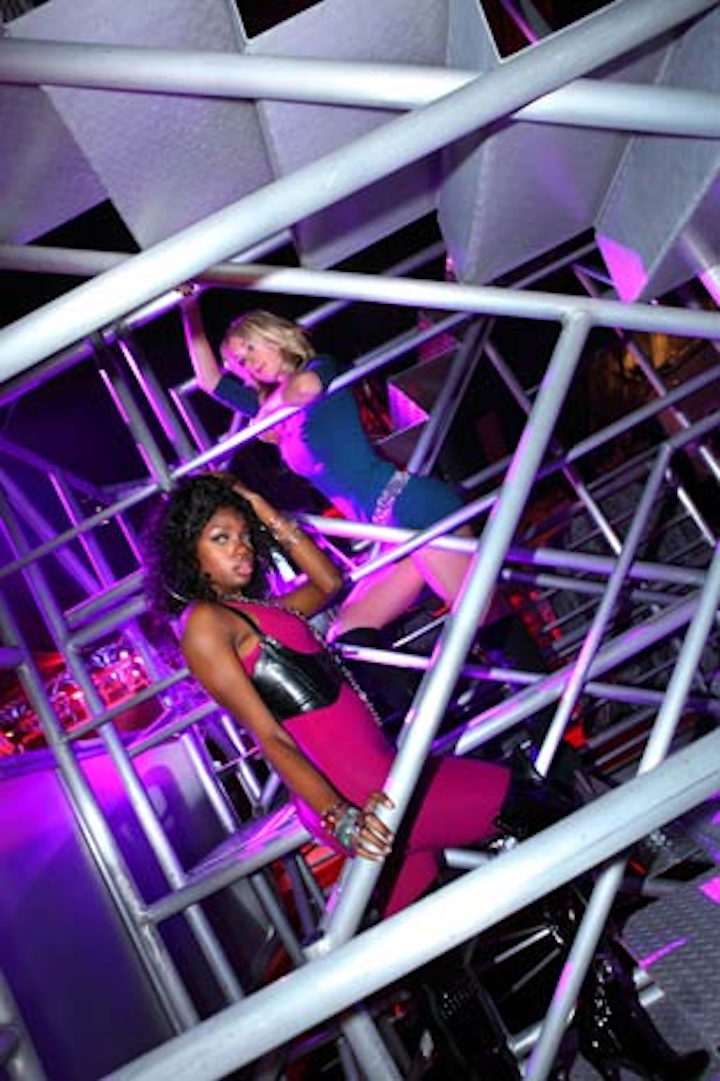