As part of its big-money initiative to fund global education programs, Bulgari hosted an intimate benefit on Thursday night at the private manse of Ron Burkle. About 250 guests turned up for the dinner, which supported Save the Children’s education programs in the U.S. and Artists for Peace and Justice’s efforts to bring education to Haiti's poorest children. Bulgari's New York-based head of communications for North America and Latin America, Rory Hermelee, oversaw the event's creative concept, and tapped Mitie Tucker to execute it.

Bulgari underwrote 100 percent of the cost of the fund-raising event, which began with a rare chance to meander through the first floor of the sprawling Burkle estate in Beverly Hills, and had a carefully considered theme that evoked childhood with school motifs. The concept was to create a dinner space that felt more like a secret hideout than a tent, with black walls draped in sketched fabrics that conjured a library, with globes, apples, and books from floor to ceiling, all in a room that felt so solid, it had guests wondering whether they were outside or in.

The look for the tables was faux black croc with black mirrored tops and Chiavari chairs. Rather than configuring rectangular tables so that one person felt left out on each end, the tables sat two on each end. Centerpieces were children's books that were recovered with white book jackets; after the event, they were donated to a literacy program. Library lamps topped tables, and a wrapped gift of a Bulgari notebook sat upon eat place setting. Chef Suzanne Goin of Lucques created the menu, which evoked the feel of both California and Italian dining and was served upon multiple dishes for each course of small plates. Desserts included finger foods like Goin's version of mini Snickers bars, strawberry Pop-Tarts, and Twinkies.

The event honored producer Simon Fuller and Oscar-winning filmmaker Paul Haggis (trademarkedly foul-mouthed in his remarks) for their personal commitments to helping children. To end the night, Ricky Martin and his band performed a lively set for the crowd—who were energetic and actually danced, a rarity in Hollywood, moving from their seats to a lounge-y area up front.

Along with the notebooks, as well as bracelets they received as dual-purpose gifts and entry tickets on the way in, guests left with gifts of Bulgari umbrellas. Since it typically rains on the Golden Globes, which take place on January 16, the thinking was that guests might like to take their luxury branded items to the Beverly Hilton, where a camera or two might be around to snap the image. As Murphy's law would have it, the weekend forecast looks just about like summer. 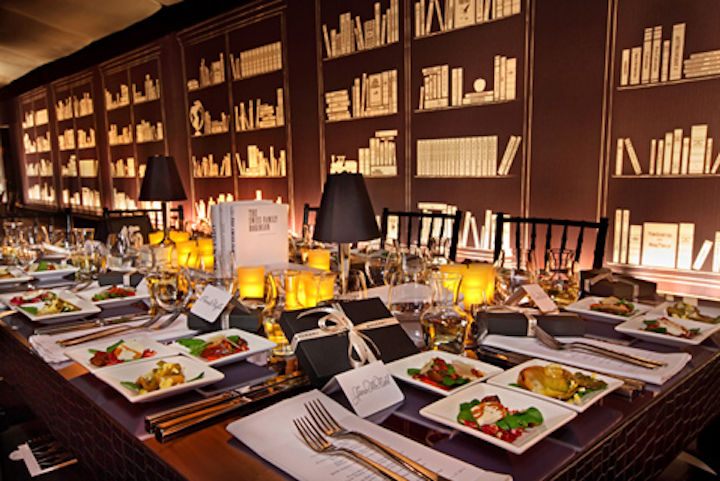 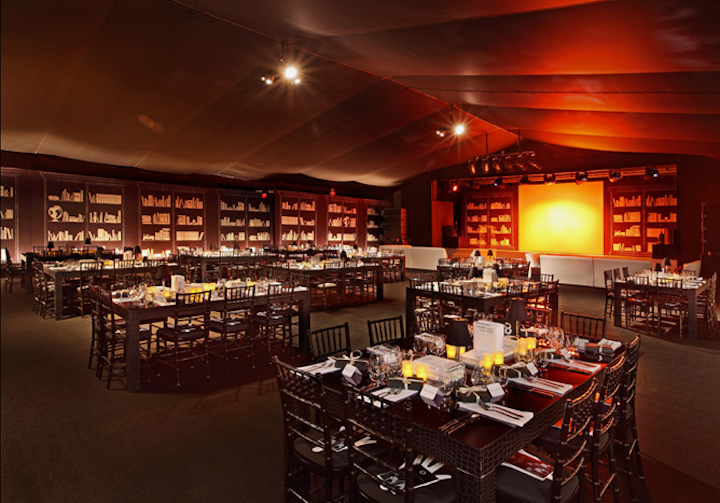 Bulgari hosted an intimate fund-raising dinner for about 250 people at the private manse of Ron Burkle.
Photo: Line 8 Photography 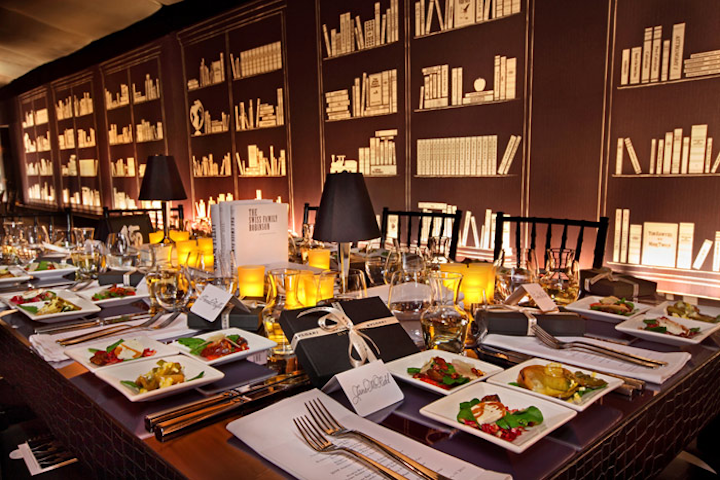 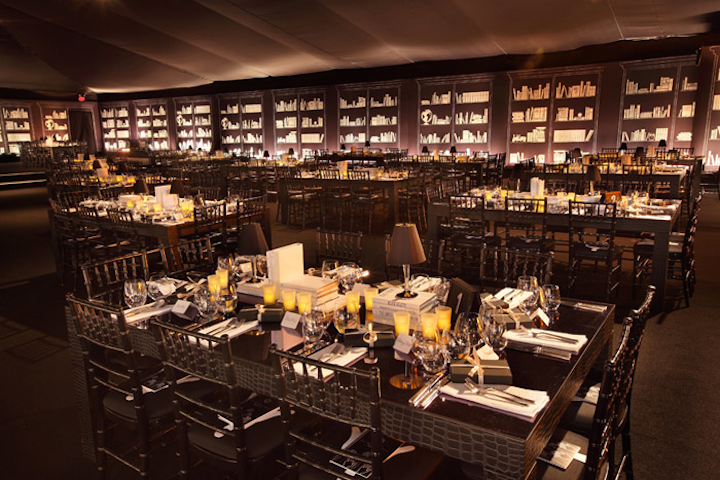 Two chairs sat at each end of each rectangular table, so that no single guest would feel isolated.
Photo: Line 8 Photography 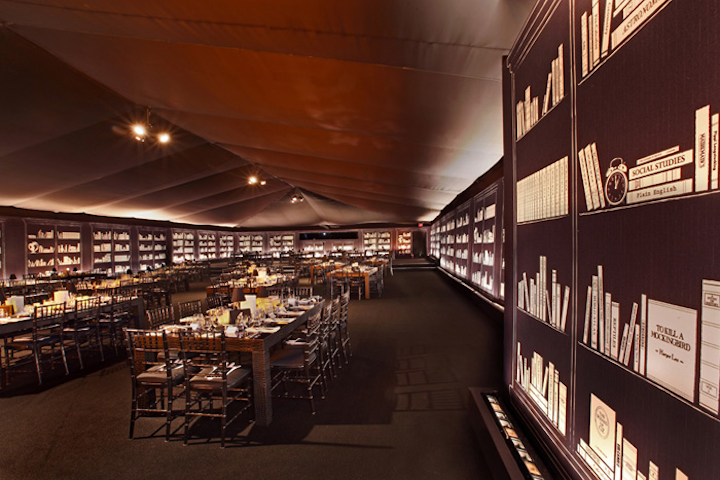 On the tent walls were sketched an interpretation of a library setting, with books, shelving, and other objects.
Photo: Line 8 Photography 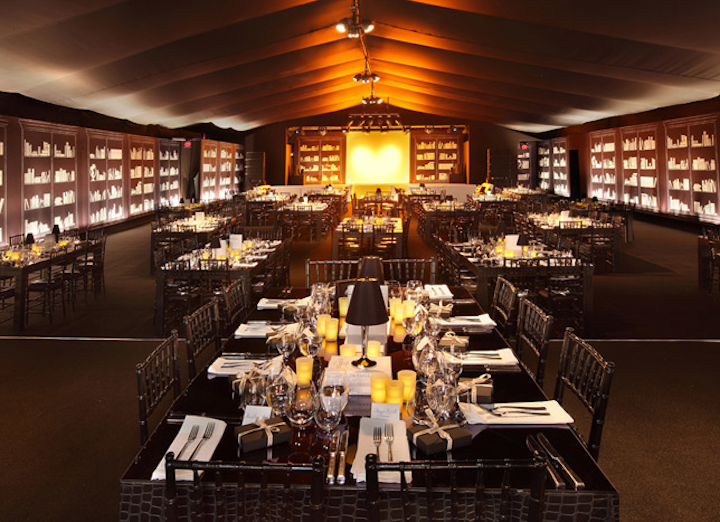 At one end of the tent was a stage for remarks, awards, an auction, and a performance by Ricky Martin.
Photo: Line 8 Photography 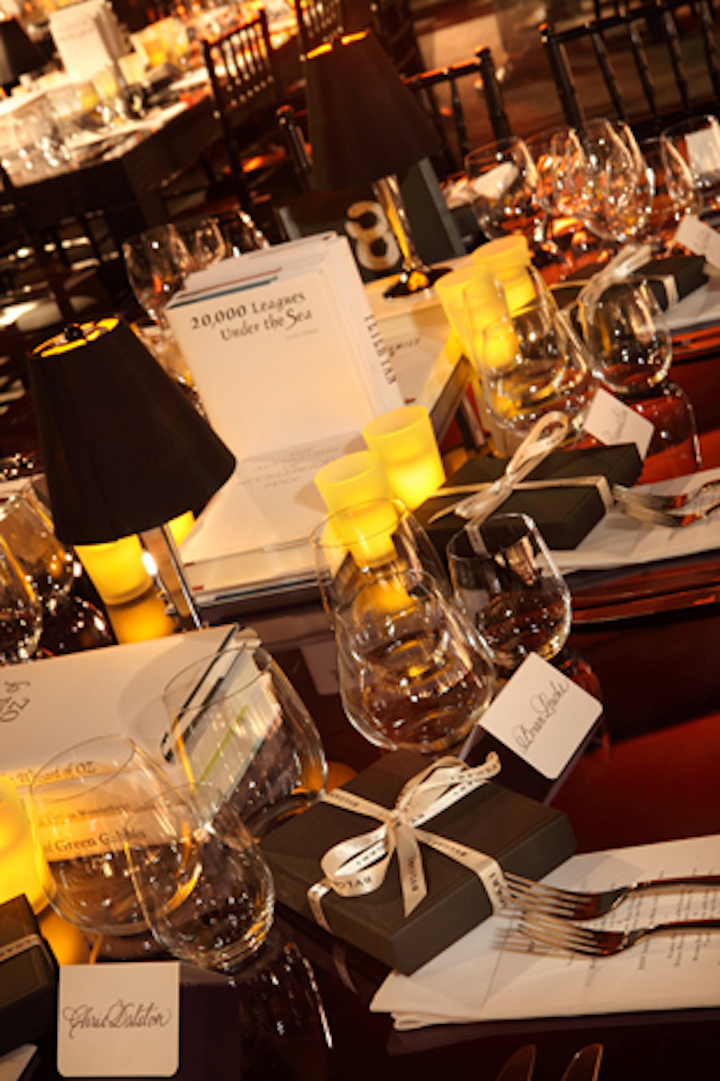 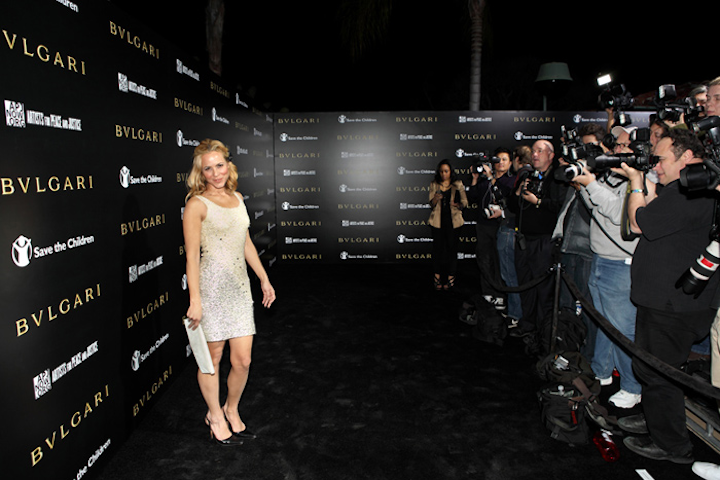