The Human Rights Campaign National Dinner had to readjust its program when the vice president bowed out due to the government shutdown.

The Human Rights Campaign’s 17th annual national dinner on Saturday night experienced some last-minute program changes when Vice President Joe Biden dropped out as the night’s keynote speaker just two days before the event because of the federal government shutdown. Rather than search for a replacement speaker, organizers reworked the program to compensate for the loss.

“The vice president would have spoken in the first half of the program, so we simply readjusted and shortened that portion of it,” said Mollie Levin, director of events for the nonprofit.

The event still had star wattage: Jennifer Lopez received the Ally for Equality Award for her support of the L.G.B.T. community, and singer-songwriter Sara Bareilles performed. Other presentations included a speech from H.R.C. president Chad Griffin and a video about the progress made for equal rights.

The dinner, which sold out three weeks earlier than in past years, drew 3,500 people the Walter E. Washington Convention Center to celebrate the work the nonprofit has done for marriage equality and equal rights for the L.G.B.T. community. With the increased press resulting from the marriage equality campaign that went viral earlier this year on Facebook—supporters used red versions of the organization's logo as profile pictures—the event grew by 400 people this year, prompting organizers to move to a different hall in the convention center. While Hall D is a bit wider than last year’s space, the column-free layout provided more space and unobstructed views of the stage.

Here's a look inside the evening. 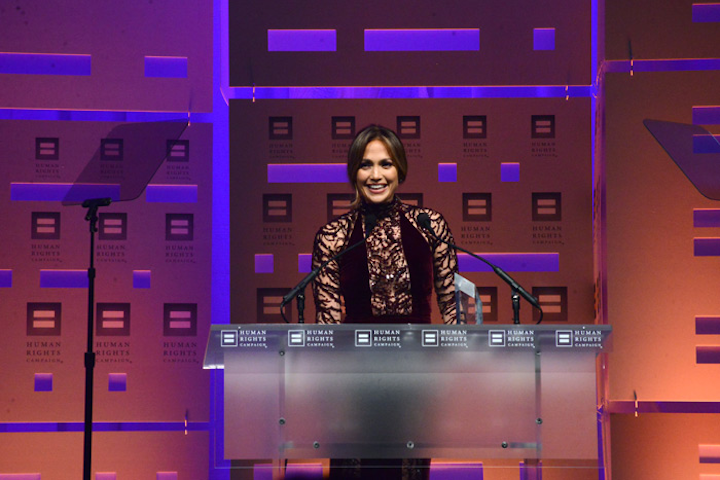 Jennifer Lopez accepted the Ally for Equality Award for her outspoken support of the L.G.B.T community.
Photo: Neshan Naltchayan for BizBash 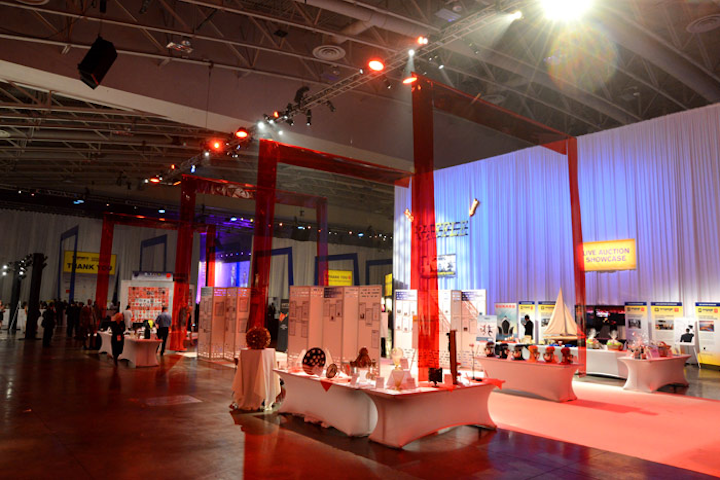 The organization's campaign for marriage equality received a viral publicity boost on Facebook when supporters used a red version of the Human Rights Campaign logo as their profile picture. At the dinner, the red logo was fashioned into suspended red archways that marked the reception entrance and silent auction displays. Further down the hall, the archways transitioned into the organization's traditional blue logo.
Photo: Neshan Naltchayan for BizBash 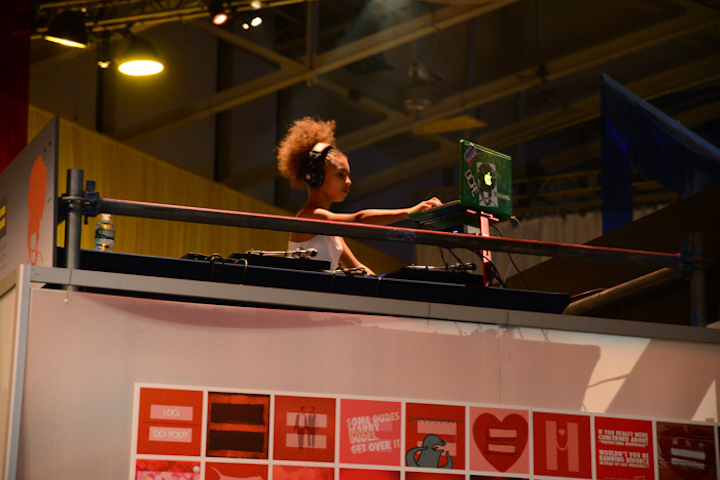 Memes of the red marriage equality logo decorated the four sides of the DJ booth where America's Got Talent alum DJ Young 1 spun during the reception.
Photo: Neshan Naltchayan for BizBash 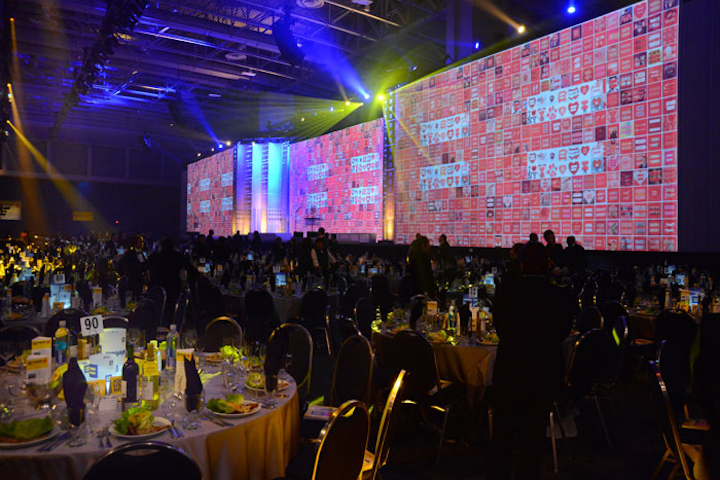 EMT Productions created a multitiered stage backdrop of three 28- by 50-foot video screens that showed inspirational videos of the H.R.C’s work in Washington, memes of its logo, and live feeds of the night’s speakers and performers.
Photo: Neshan Naltchayan for BizBash 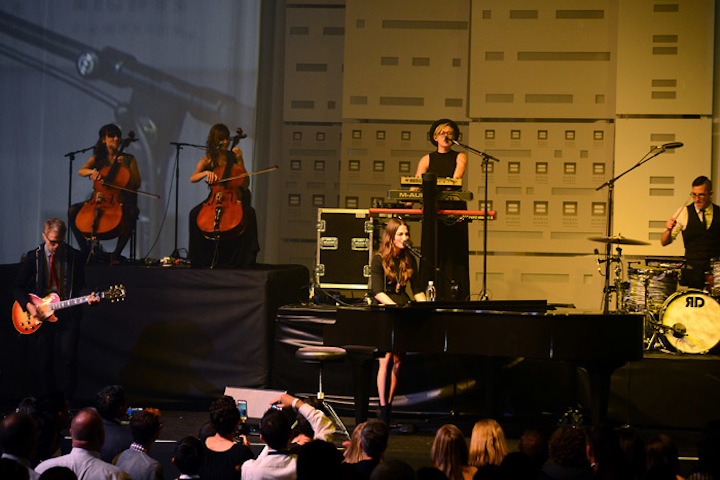 Singer-songwriter Sara Bareilles served as the night’s headliner and closed the evening with a 30-minute performance.
Photo: Neshan Naltchayan for BizBash 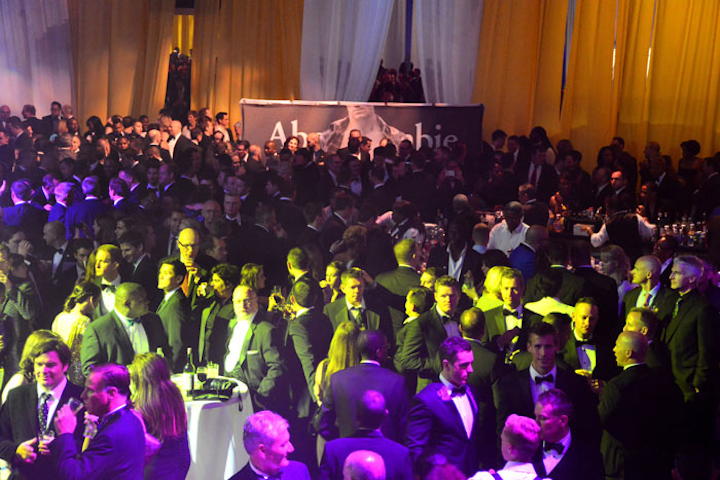 Abercrombie & Fitch sponsored the after-party in the same space that hosted the sponsors V.I.P. reception prior to the dinner.
Photo: Neshan Naltchayan for BizBash 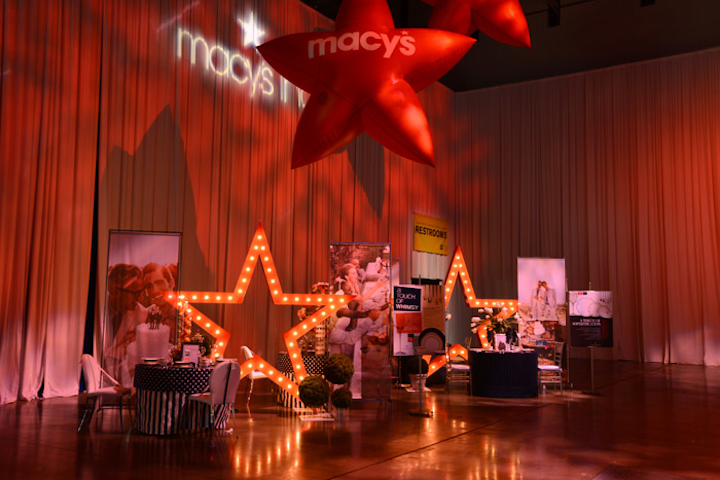 Macy’s set up its signature red balloons and stars at the entrance to the reception, a nod to the marriage equality decor and lighting in the space. The tables displayed the company’s silent auction items.
Photo: Neshan Naltchayan for BizBash 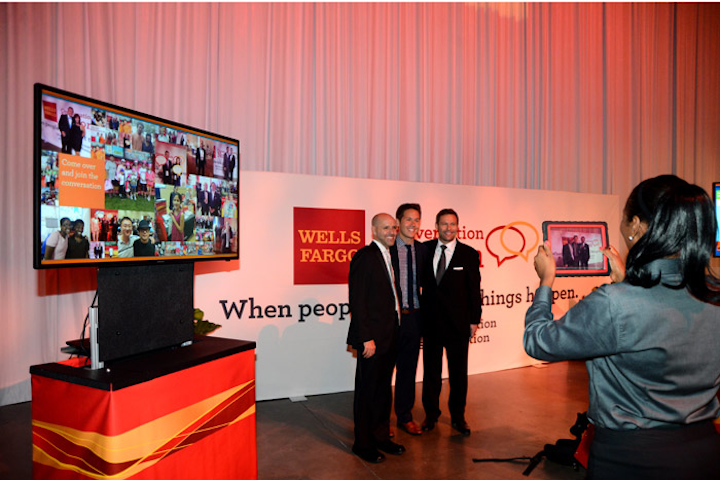 Wells Fargo brought its national Conversation Nation tour to the reception with local reps capturing photos of guests and polling them on lifestyle questions such as how they use social media. Photos appeared on the two screens on site and were sent via email so guests could see how their responses to the poll questions compared to others around the country.
Photo: Neshan Naltchayan for BizBash
More in Programming & Entertainment