See How YouTube Created Five Distinct Events at One Convention

The online-video service dominated the conversation at this year's VidCon, creating five different events and activations inspired by its new original programming.

The eighth annual VidCon—a online-video convention held annually at the Anaheim Convention Center—ran from June 22 to 24, drawing roughly 31,000 fans and industry leaders from across the country. More than 400 video-content creators and brands such as Facebook, AwesomenessTV, and Snapchat hosted meet-and-greets, panels, and other events and activations throughout the four-day convention.

But the brand that tends to dominate VidCon's conversations is, unsurprisingly, YouTube: The Google-owned video-sharing website hosted five distinct events throughout the long weekend. MAS Event & Design was tasked with producing and designing all the activations, working with the Google events and experiences team and the YouTube brand marketing and events team.

Pulling off five events in four days is no easy feat, but MAS has eight years of experience producing multi-layered events with the YouTube and Google teams.

“We've got a strong divide-and-conquer model that we've perfected over the years,” explained Mia Choi, the firm’s chief creative officer and founder, who oversaw the events from start to finish alongside two MAS executive producers. “This was a joint effort, with staff from MAS teams in both New York and Los Angeles involved. Each respective project had a dedicated team—producer, coordinator, and art director … and we had two technical directors, one at the convention center and one at the Hyatt Regency Orange County," VidCon’s official hotel.

In addition to a sleek B-to-B lounge for presentations and a casual, inspiring lounge for creators, YouTube leaned on its new YouTube Red original programming to create an eye-catching keynote session and an interactive escape-room-like activation on the show floor. The brand also kicked off the weekend with a partner reception inspired by Route 66, using neon road signs, retro decor, and car-inspired props and furniture.

While MAS worked as the sole production company for each activation, the Google team oversaw the B-to-B and creator lounges and partner reception, while the keynote and escape-room experience were managed directly by the YouTube team.

"These teams generally offer rather strong feedback and direction—which we love—but they also give us a lot of room to come up with creative entirely on our end and present ideas for their input," Choi said. "We have a great working knowledge of both brands and how to represent them well within events."

Here's a look at how YouTube got fans and creators talking at this year's VidCon. 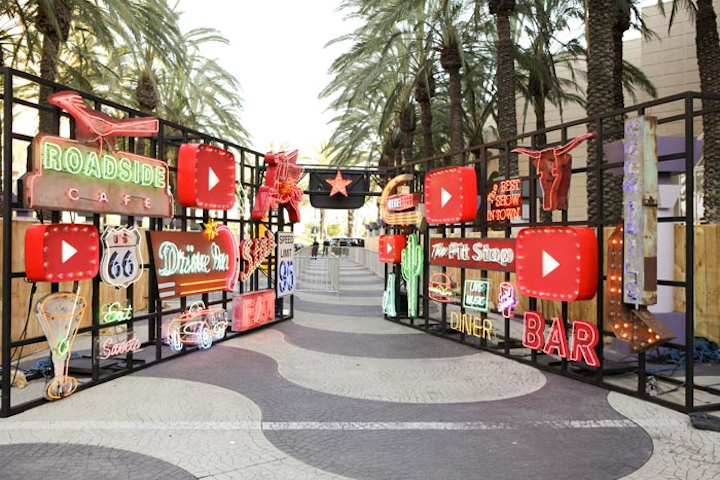 YouTube’s partner reception, held on June 22 at the Hyatt Regency, was overseen by the Google events and experiences team. Designed by MAS Event & Design, the event was inspired by Route 66, a historic highway that ran from Chicago to Los Angeles. Retro neon road signs provided by Heaven or Las Vegas greeted guests at the entrance to the party. 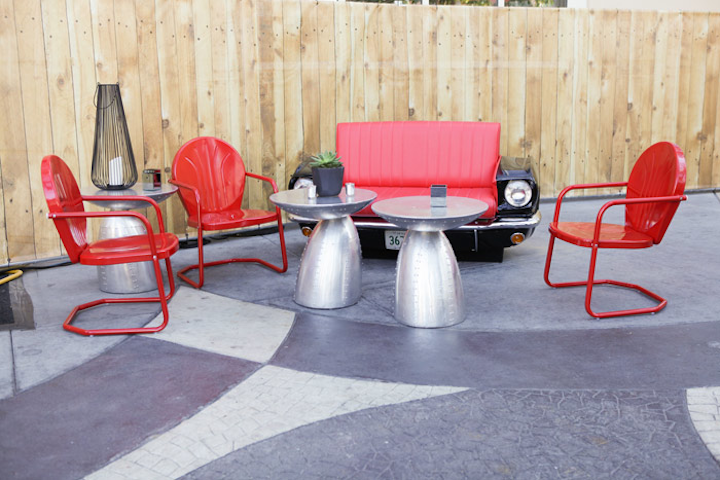 In keeping with the Route 66 theme, a retro diner-inspired lounge featured a Mustang convertible that was converted into couches. “The party didn’t need to tie back into any specific content, so we had a little more flexibility to come up with a unique theme,” explained Choi. “We came up with a treatment that would tie together roadside attractions, that feeling of being in a car, and where you would stop on iconic Route 66, and started to design the space around these ideas.” 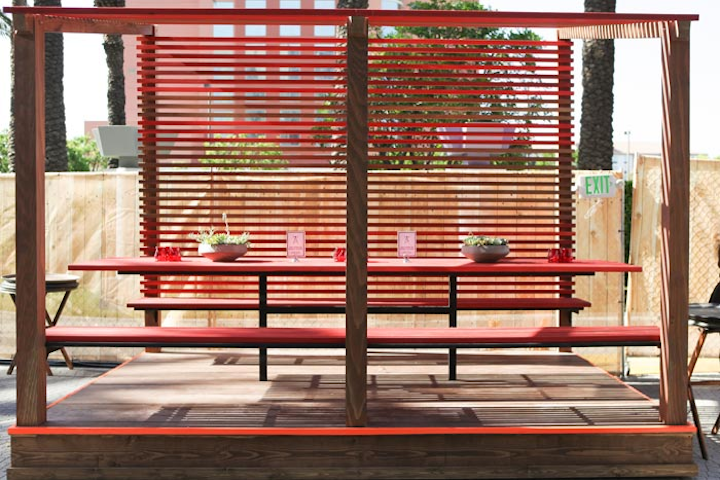 Seating areas throughout the event were inspired by highway rest stops. Blueprint Studios and Cort Event Furnishings provided rentals for the evening. 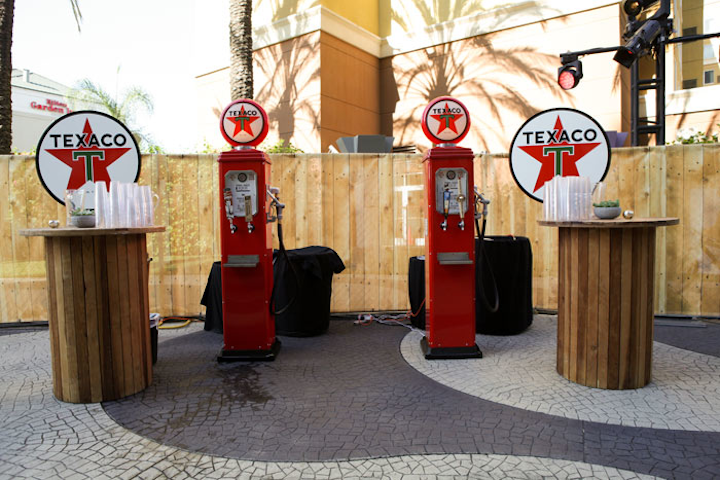 A beer bar was modeled after retro gas stations, with gas pumps serving as beer taps. Food and beverage was provided by the Hyatt Regency’s in-house catering team. 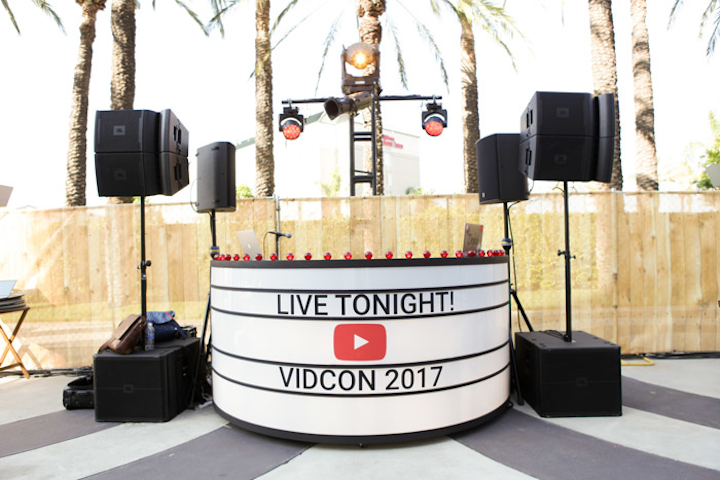 The event’s DJ booth was inspired by the film marquees seen in towns along Route 66. Creative Technology handled audio for the event. 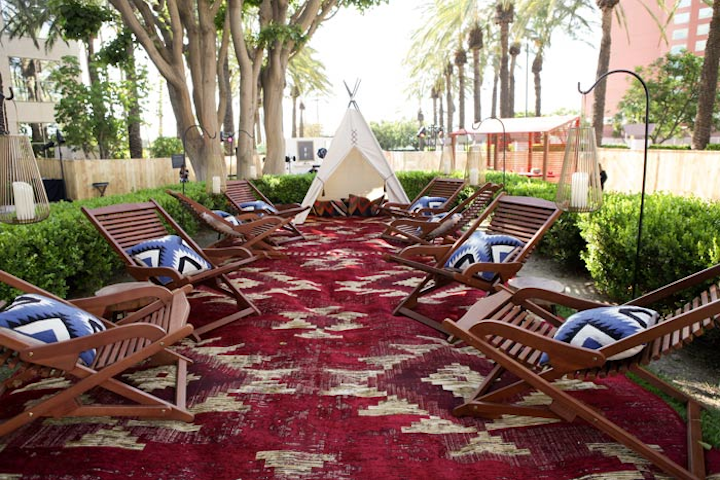 A lounge evoked the southwestern United States with a teepee, colorful rugs, and lounge chairs. 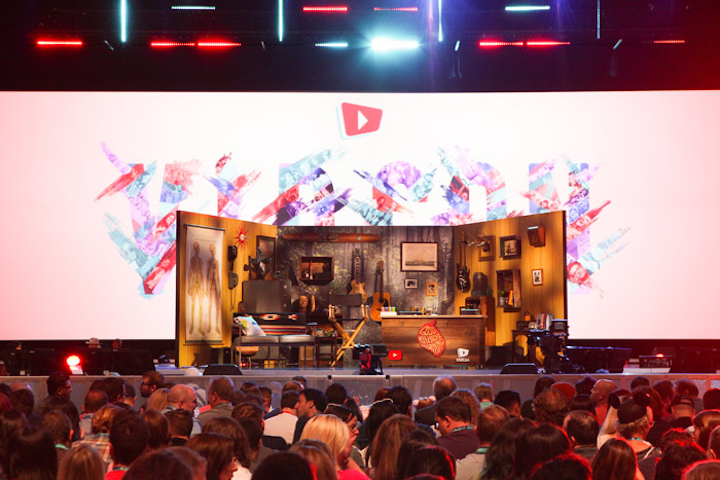 YouTube's keynote, which took place on June 22 at the Anaheim Convention Center, was inspired by the YouTube Red show Good Mythical Morning. The brand used the speech to announce its latest developments, including new virtual-reality products, in-app messenger services, and programming for YouTube Red. 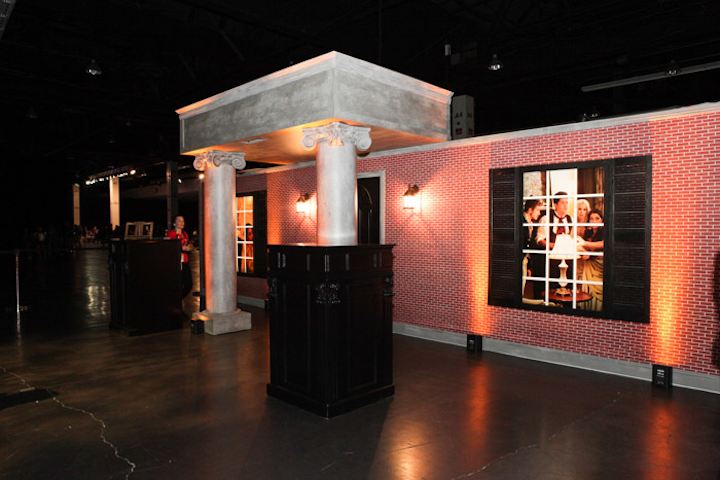 In another nod to a new YouTube Red original show—Escape the Night 2—an escape-room-style activation was erected on the convention-center floor. The YouTube client team worked with Enigma Escape Rooms, an escape-room consultant, to create the puzzles. 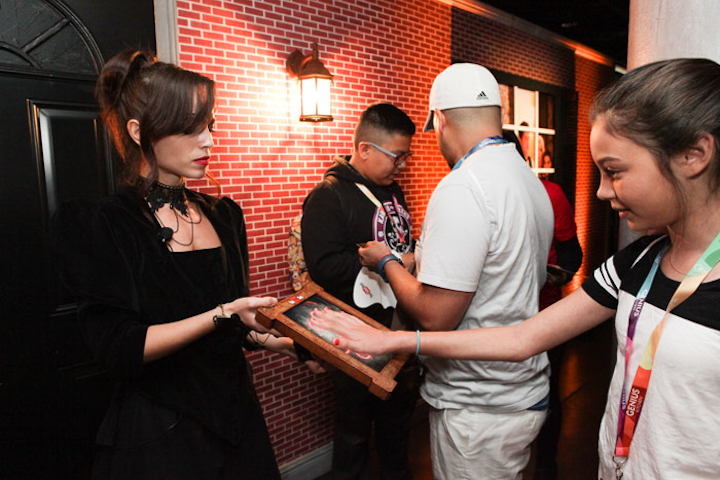 Costumed actors assigned guests a character from the show using a palm-reading app designed by DeepLocal, then guided them through the experience. 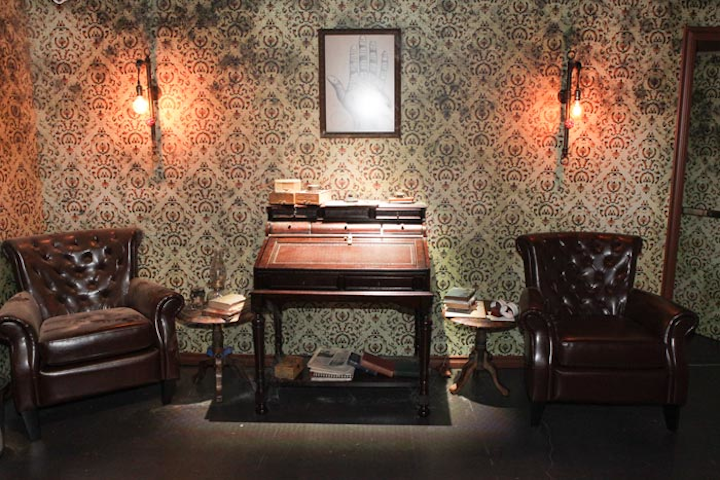 Inside the escape room, a series of puzzles unlocked clues that eventually led to the way out of the room. Props throughout the space helped recreate one of the show’s episodes, and were tied to clues. Pinnacle Exhibits handled the fabrication, while Blueprint Studios provided rentals. 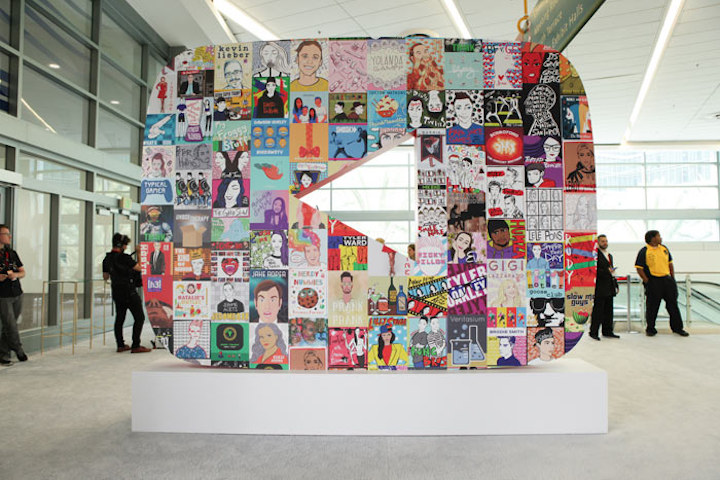 The entrance to the B-to-B lounge at the Anaheim Convention Center was marked by a large logo featuring illustrated posters of YouTube creators.

“MAS worked with a whole group of illustrators to create these,” said Choi. “They were first used in an event we produce every year, the YouTube Creators Summit. We loved the illustrations so much, so we thought it would be a fun way to incorporate some of the creators into this event at VidCon.” 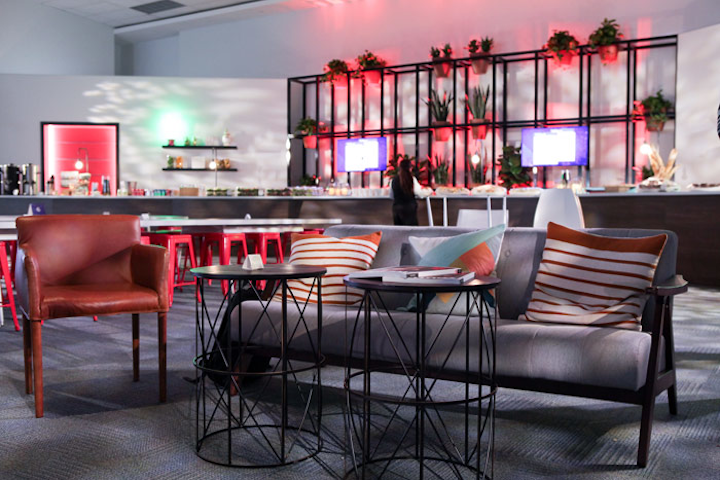 The lounge had a small stage for presentations, and a bar area in the back of the room allowed for conversation and networking. Greenery from La Petit Gardenia brought warmth to the space, while an LED light treatment from Felix Lighting gave it a modern twist. Aramark handled the catering. 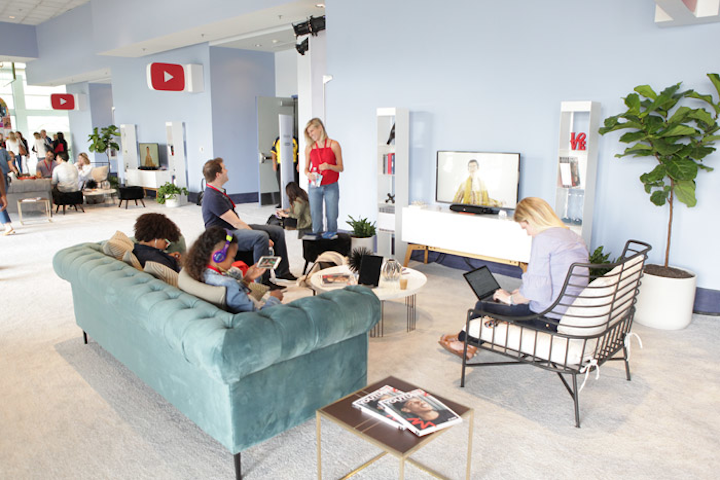 Smaller networking lounges were set up throughout the foyer in living-room settings where YouTube content played on television screens. Blueprint Studios and Taylor Creative provided rentals. 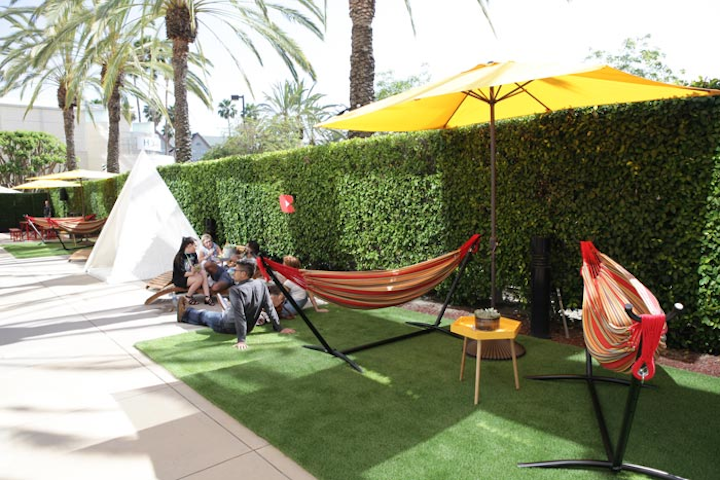 The ballroom in the Hyatt Regency was transformed into a lounge for YouTube's creators to relax, network, and work. The interior was designed with outdoor lounge furniture, succulents, and colorful rugs, while a patio featured Astroturf-padded vignettes with hammocks, lounge chairs, and a teepee. Rentals were provided by Shelter Company, Taylor Creative, Yeah! Rentals, and Cort Event Furnishings.

“[The Creator Lounge] was a brand-new activation for this year, so we got to start from scratch with the mindset of making a warm and inviting space for creators,” said Choi. 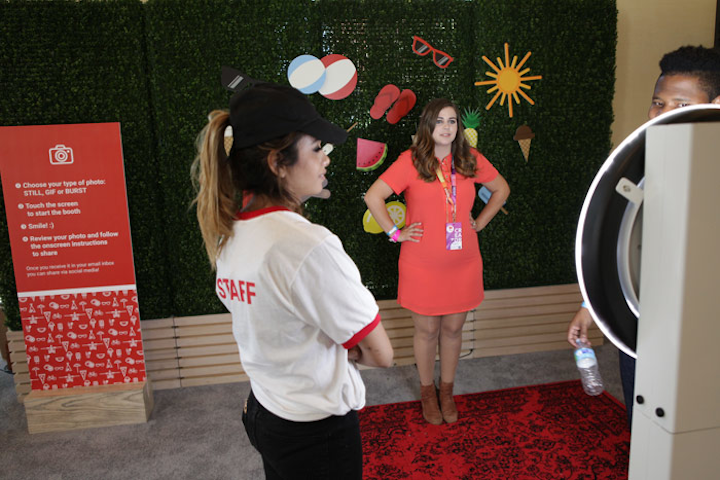 A photo booth by PopSocial had a summer-inspired backdrop, with a wall of greenery and colorful props and icons.