The networking app has been diversifying its event strategy to reflect its expanded offerings.

Bumble, the female-forward dating app where women make the first move, has been playing the field—at least when it comes to events.

As it continues to rebrand itself as a “social-connecting” app, by introducing features like Bumble Bizz and Bumble BFF, the tech tool is developing into a catch-all networking platform, where you might meet your new business partner, as well as your soulmate.

With this shift in its product offerings, the brand’s event strategy has also expanded.

“As many people know, Bumble launched as a dating app, but we’ve grown to become so much more,” explains Andee Olson, Bumble’s director of partnerships. “We are now one app with three modes (Bumble Date, Bumble BFF, and Bumble Bizz), which are united by a mission to empower women, end misogyny, and hold people accountable for their actions online. Naturally, as our business has grown, our strategy has grown from focusing on providing entertaining dating-related events for existing and potential Bumble matches to including events and entertainment that are appealing to users who are actively looking for meaningful connections as a whole—whether that’s in love, friendship, or business.”

Currently, the app boasts 40 million users worldwide. Bumble owner Rimberg International Corp., a holding company that also controls the dating apps Chappy and Badoo, is even considering an initial public offering on the Nasdaq based on the growth potential of the app, whose users skew younger than those of competitor apps owned by Match.

And since the interests of the app’s users can range from dating to deal making, each Bumble event, which are typically free to users on a first-come, first-serve basis, needs to be tailored to a specific segment. For example, the app recently joined forces with HBO to host an experience called “Stay Home to the Movies” in August at a brownstone in Manhattan. Invited guests watched exclusive HBO content in a comfy home setting. “This was a hugely successful activation for us because the experience resonated with our core audience that consists of young, socially connected individuals that are always looking for new and exciting things to do,” Olson explains.

For its business-focused users, the brand organizes panels that feature female leaders across various industries who share their success stories, learnings, and entrepreneurial journeys. These Bumble Bizz panels, which are held in cities around the country, attract professionals who are actively seeking to expand their networks, meet collaborators, and find their next career opportunity.

Recently, Bumble found a way to combine all these event efforts, thanks to a partnership with hospitality bigwig Ian Schrager and his Public Hotel in New York, where the brand hosted a series of events around its in-app modes, including a “Work Party” for freelancers and a “Make the First Move” cocktail party. Attendees included a mix of social media influencers, creative types, and local Bumble users. It was the first time the app teamed up with a New York hotel property.

“When Public Hotels launched in New York City, we saw this as a great partnership opportunity because when you look at our brands broadly, both Bumble and Public Hotels help bring people together, whether that’s for business travel or for a girl’s night out,” Olson says. “As a result, our partnership enabled us to provide Bumble users with a dynamic social space to make new, empowering connections.”

The brand also holds a monthly dinner series called Bumble Gives Back, which is designed for single users to come together in real life in support of a cause. For each dinner, Bumble partners with a different philanthropic cause, as part of its #BumbleGivesBack initiative. Events have taken place in London and Sydney; the first New York iteration was held in September at the Public Hotel in partnership with Dress for Success, an international not-for-profit organization that empowers women with professional attire and development tools.

Whether it’s a charitable dinner or a social meetup or a business panel, Bumble events continue to strive toward one goal: to turn digital connections into offline experiences.

In 2018 in Los Angeles, Bumble debuted its Hive concept, a pop-up space that brings the brand to life and works as an extension of Bumble headquarters, which is located in Austin. Inside, visitors enjoyed complimentary entertainment, drinks and snacks, and interactive sessions with entrepreneurs and influencers. The pop-up was so popular it was extended from one month to three. Olson says that because of its success the company is exploring the idea of a permanent IRL space for its users. 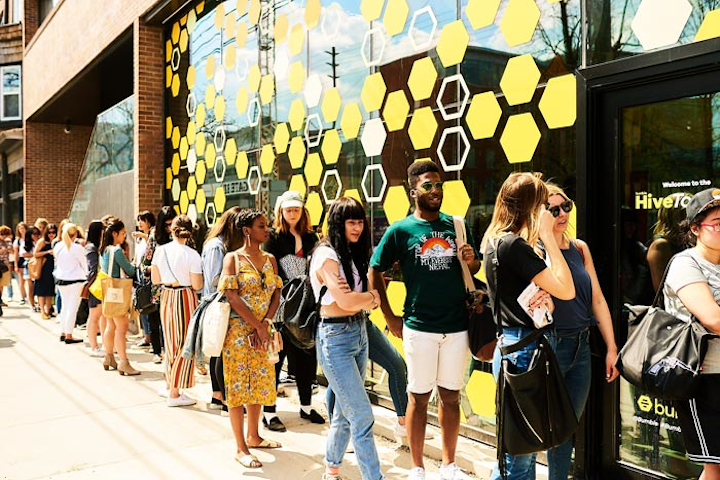 In Los Angeles, people lined up to get inside the Bumble Hive, a pop-up space last year that brought the brand to life.
Photo: Courtesy of Bumble 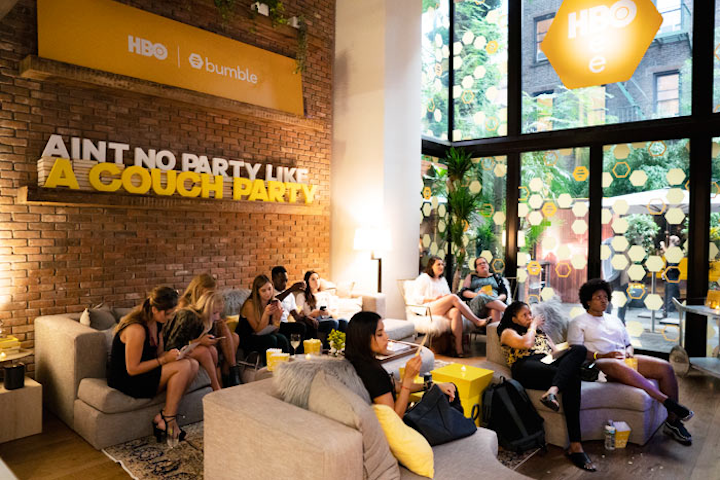 Bumble and HBO hosted an experience called “Stay Home to the Movies,” where guests watched exclusive HBO content in a comfy residential setting in New York.
Photo: Courtesy of HBO 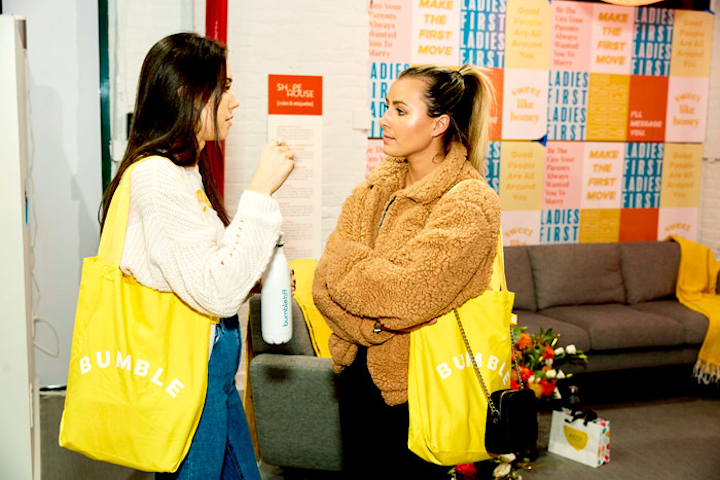 At a Bumble Bizz “Women in Wellness” event at Shape House in Brooklyn, guests heard from a panel of female founders and C.E.O.s.
Photo: Courtesy of Bumble
More in Strategy