Using the same Midtown space that played host to its Liberty of London pop-up last year, Target upped the ante for its latest designer collection—a collaboration with Italian fashion house Missoni—and built a bigger, bolder experiential effort. The vacant venue, which sits opposite Bryant Park on Sixth Avenue and 42nd Street, was not only transformed into a temporary store bedecked with bull's-eye logos and Missoni's signature pattern, but is also home to "Little Marina," a 25-foot-tall doll that's part of a social media campaign for the launch.

With 400 pieces—apparel and accessories for women, men, girls and baby, as well as home furnishings—the Missoni for Target line is the retailer's largest designer collection to date. To properly showcase this, Target leased the site's second floor, increasing the size of the space by nearly a third, from 5,000 to 8,000 square feet. Event producer David Stark was brought in to build out the space and sought to do so in a manner that wasn't visually excessive.

"The collection is so strong that it's not hard to bring it to life in a way that is exciting," said Stark, who also created the Liberty of London pop-up and has been working with Target for nearly a decade. "The challenge is that because there are so many patterns, it is quite a sophisticated line you have to walk to make them look incredible. It's easy to have a lot of overload—you have to figure out the fine balance of placement and juxtaposition so that everything has the air to be seen and breathe."

Allowing the collection to flex its muscles, Stark created a setup comparable to a house, or, "Missoni Mall," as as some likened it, with the first floor dedicated to smaller goods and decorative objects and the second floor, accessed by stairs, housing bed and bath vignettes.

Planning for the project took about eight months, with Target's design and marketing teams traveling to Italy several times to work with the Missoni family, who in turn made visits to the retailer's Minneapolis headquarters. Actual setup took three weeks working with a crew of about 45. Stark estimates the teardown time to be about a week.

Scattered downpours did little to dampen the moods of hundreds of fashion V.I.P.s who turned out for the preview shopping party on Wednesday. To maximize the selling space, celebrity guests—including Joy Bryant, Michelle Trachtenberg, Camilla Belle, Emma Roberts, and Selita Ebanks—entered a covered step-and-repeat erected just outside the pop-up. Such attendees were escorted inside via a separate entrance to see the giant doll. Little Marina, which was created by a Los Angeles-based special effects company and is operated by four puppeteers, comes dressed head-to-toe in Missoni for Target and holds an oversize replica of an iPhone. Given its size, the big marionette served as the centerpiece of the space.

"It's always about buzz and visibility and creating excitement around the launch," Stark said.

For the rest of the interior, Stark used the iconic Missoni patterns as a tool to cohesively revamp the raw venue. For example, black-and-white-patterned walls enclose and mask the structural columns. "It's designed in a way that it's supposed to be here," said Stark. "[The design is] one part married to the architecture of the space and one part bringing the campaign to life."

With hundreds of products and multiple bold prints to balance, Stark said the concept of the pop-up actually worked in his favor when it came to mapping out the store design. "You know exactly what you're getting, so you can create displays and a floor plan that's specific to the product," he said. "We really start with the grid and then design very specific fixtures and displays with the product exactly in mind." This included painting the ceiling black to allow for vivid colors of the collection and the oversize ad campaign images—which channel a 1960s Italian film aesthetic—to truly pop.

Ahead of the Missoni for Target’s official national launch on September 13, the pop-up shop debuted to the public on Fashion’s Night Out and was slated to stay open through Saturday, but on Thursday the entire inventory was depleted within an hour, forcing it to close. 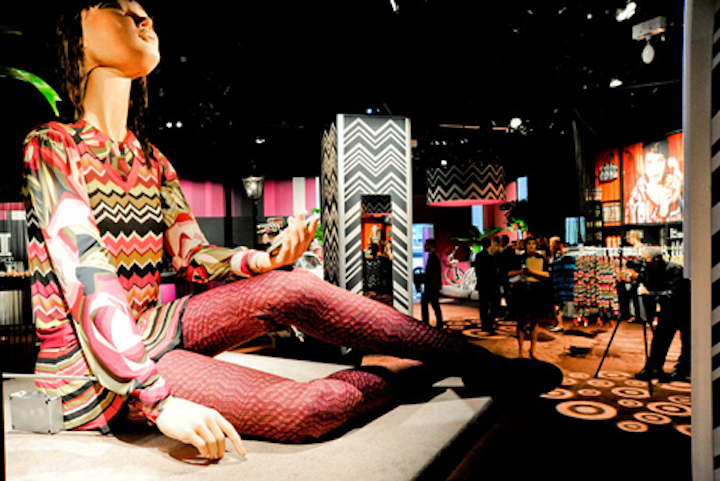 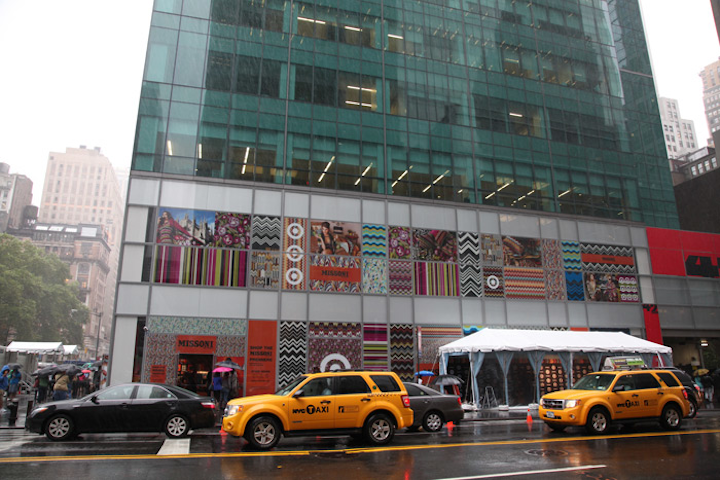 Like the party for the Liberty of London pop-up before it, the Missoni for Target preview drew hundreds of guests, who braved Wednesday night's rainy weather to shop the 400-piece collection.
Photo: Thomas Concordia 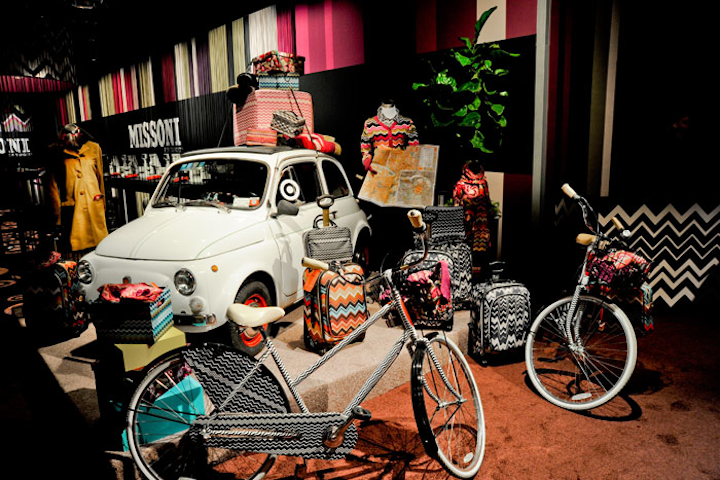 While the Liberty of London pop-up had its own colorful aesthetic, the sensibility of the Missoni merchandise lends itself to a completely different setup, parts of which are taken from the ad campaign. "At Liberty we used a lot of projections, technology, and flowers to create ambience," said David Stark, who focused on patterning for this project.
Photo: Neil Rasmus/BFAnyc.com 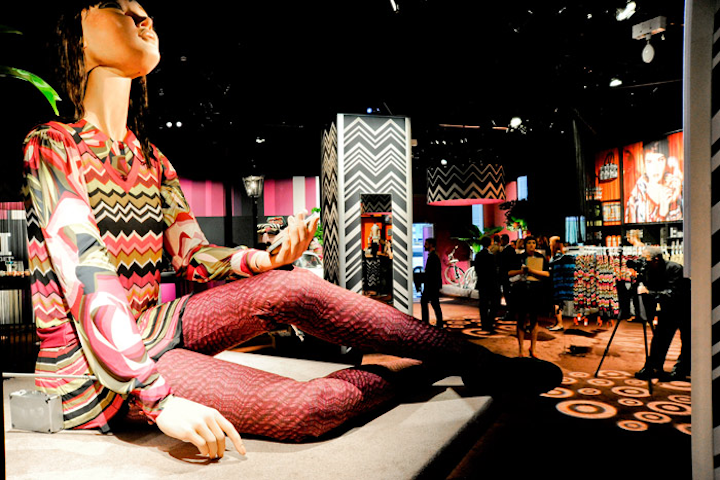 The temporary store currently houses the 25-foot-tall marionette known as "Little Marina," a custom doll with its own Tumblr and Twitter account, used by the retailer to build buzz for the collection.
Photo: Neil Rasmus/BFAnyc.com 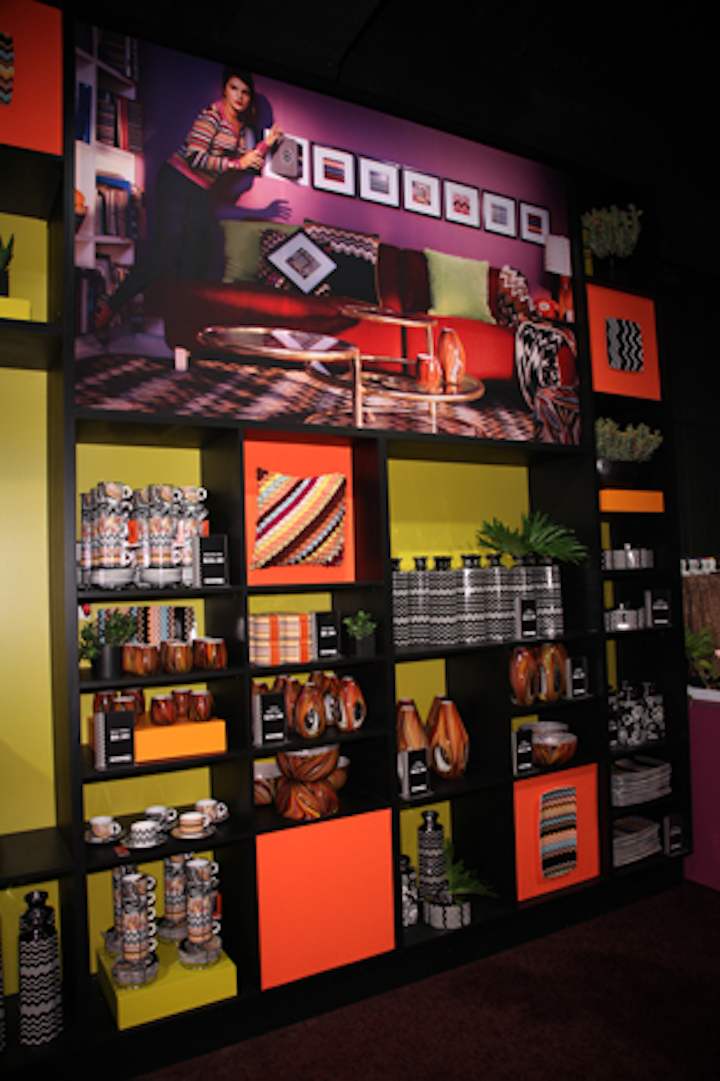 Stark created a series of wall shelving units to create a striking display of the merchandise, looking for a functional way to separate and showcase the various patterns and colors found in the collection.
Photo: Thomas Concordia 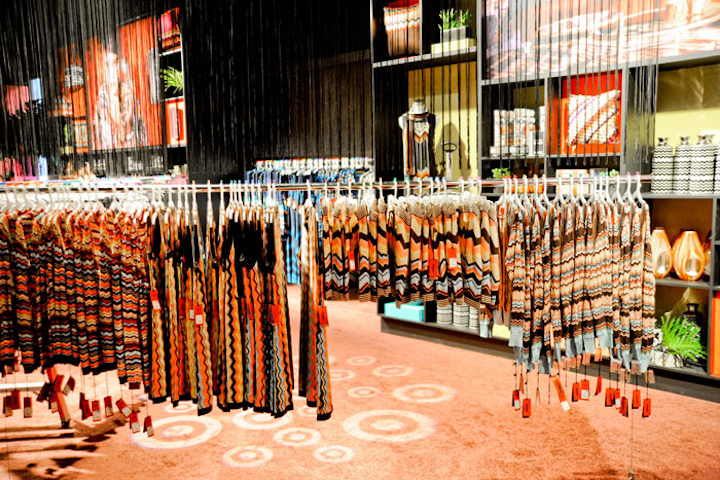 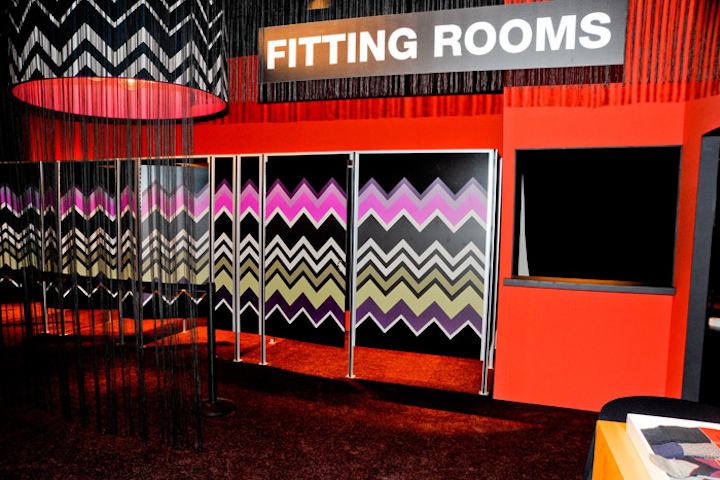 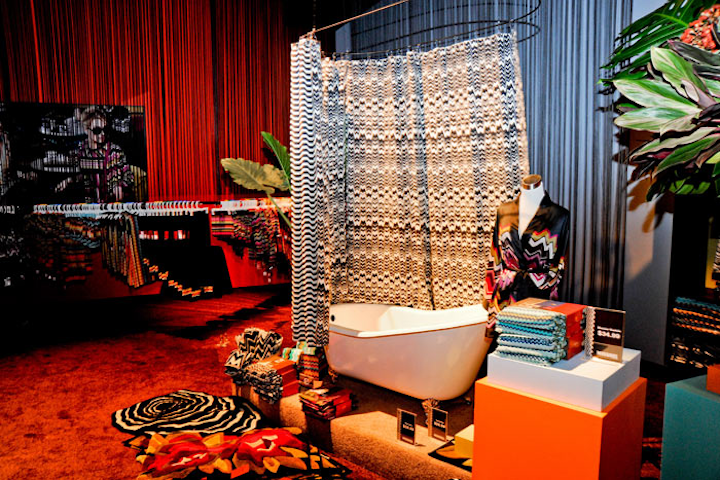 The smaller second-floor space is used to display the collection's home and bath items, placed in department store-style vignettes in the space.
Photo: Neil Rasmus/BFAnyc.com 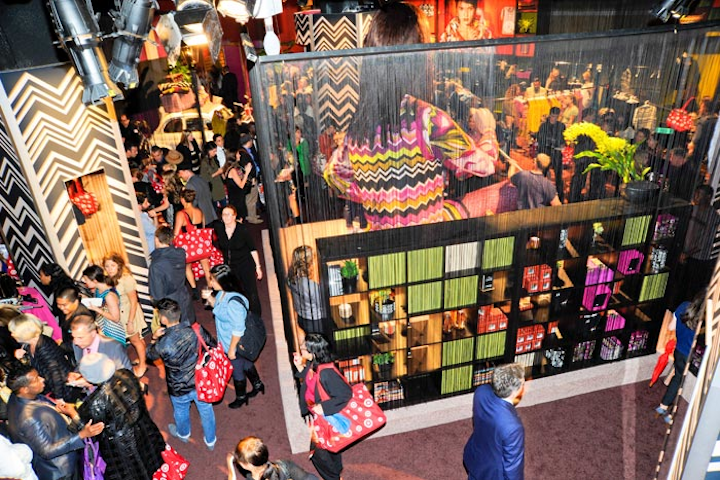 Although Target expanded the site from 5,000 to 8,000 square feet, the temporary store is deceptively big, especially when crowded with eager shoppers, as it was during the preview party.
Photo: Neil Rasmus/BFAnyc.com 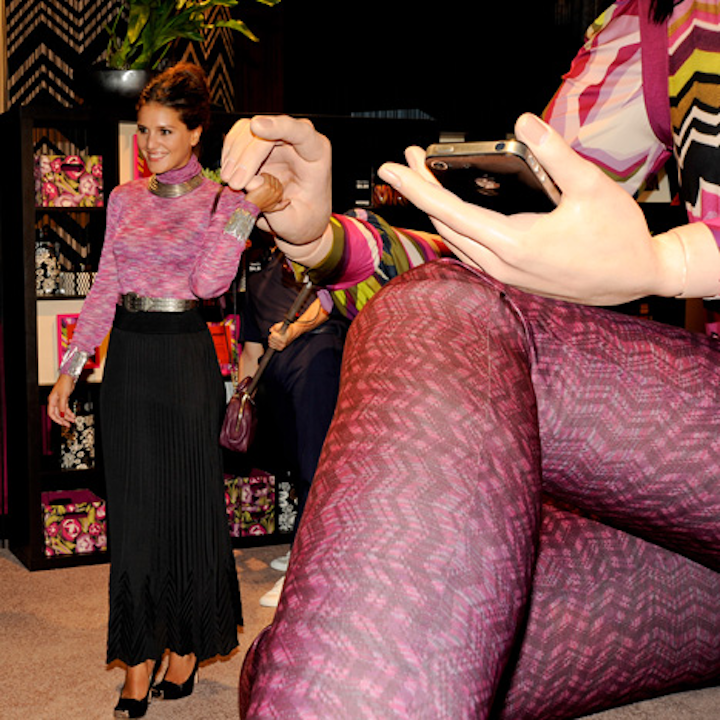 Margherita Maccapani Missoni, a member of the Missoni family, is featured in the ad campaign and made an appearance on Wednesday night along with other celebrities.
Photo: Neil Rasmus/BFAnyc.com 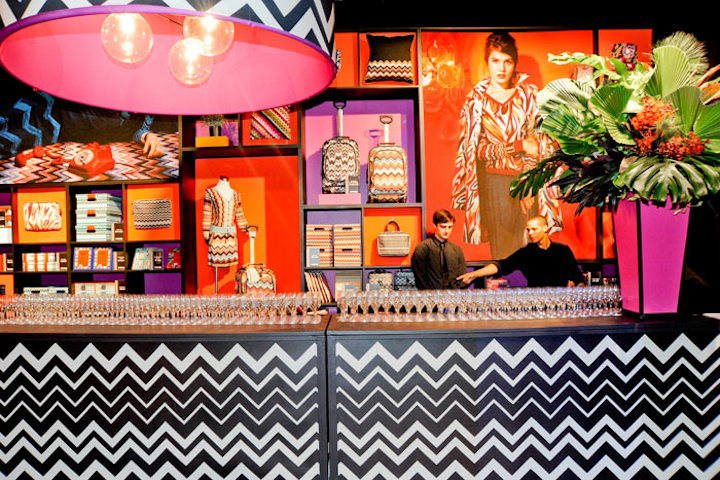 As for foliage, Stark drew from the rich hues of the Missoni color wheel, incorporating palm fronds, different kinds of berries, and various types of protea, arranging them in large vases and placing them atop bars.
Photo: Neil Rasmus/BFAnyc.com 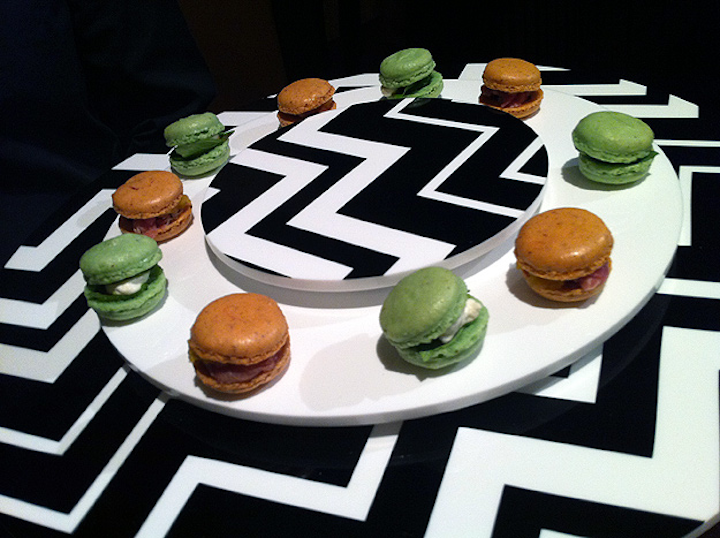 No detail was spared for the preview party, not even when it came to the food. Creative Edge served a bevy of Italian-inspired hors d'oeuvres on custom, Missoni-inspired trays lined with patterns. The menu included colorful macaroons (pictured), as well as a lobster pop tart that had rice paper garnishes decorated with the signature zigzag print.
Photo: Courtesy of Creative Edge
More in Event Design