How This Gala Hosted Dinner Inside King Tut's Tomb

Known as one of the city’s top benefits of the year, the California Science Center’s annual Discovery Ball typically centers its theme and decor around its newest exhibit. The record-breaking 20th-anniversary event, held on March 23 at the museum, was no exception, immersing guests in the glittering discovery of King Tut’s tomb in 1922.

The museum’s event services department, helmed by vice president of food and event services Christina Sion, headed up the production fund-raiser, which drew nearly 1,000 guests and featured the premiere of the new exhibit, “King Tut: Treasures of the Golden Pharaoh.”

"Our design choices for this year’s gala were heavily influenced by the imagery and artifacts of this gorgeous exhibition, as well as the life and legend of the famous 'boy king,'" Sion said.

The entire evening was designed to transport guests back in time: The dress code called for “Roaring ’20s” attire, and projected news footage, era-appropriate music, and costumed actors furthered the theme.

The night kicked off with a cocktail reception set in 1921, when archaeologist Howard Carter and his British sponsor, Lord Carnarvon, were searching for the tomb. Actors in vignettes represented Carter’s crew, searching for the grave in Egypt’s Valley of the Kings. Other on-theme highlights from the cocktail party included stations where guests could have their names written in hieroglyphics, as well as a British tea party in honor of Lord Carnarvon to entertain guests waiting in line to see the exhibit.

Later in the evening, dinner took place within the Samuel Oschin Pavilion, which famously features the space shuttle Endeavour. The pavilion was transformed to resemble the inside of the royal tomb.

“In order to create the appropriate decor and ambiance of King Tut’s burial chamber, we had the unique challenge of integrating the large artifact which resides in the dinner location—the space shuttle Endeavour—into the theme,” said Sion. “Through the amazing imagination and talent of Bart Kresa Design, an image of King Tut’s jewel enrobed sarcophagus was video mapped on the Endeavour as the central decor of the dining room.”

Additional projections on the walls were actual artwork found in the tomb. “Since we employed video mapping as opposed to still imagery, torches projected along the walls animated throughout the evening and the color palette changed from warmer royal tones of gold, lapis, and carnelian at the beginning of the evening to cooler shades of blues and purples with a sparkling effect—which I dubbed ‘Disco Tut’—for the dessert service,” explained Sion.

The evening ended with a Great Gatsby-inspired after-party, in honor of the year 1922 when Tut’s tomb was discovered. Dancers from Lucent Dossier wore flapper attire and greeted guests with flapper headbands, strands of pearls and boas, chocolate cigars, and more.

While last year’s Discovery Ball was held in May, this year’s event was pushed up to coincide with the opening of the exhibit. “Weather was more of an issue for a March event, so we ended up pulling our arrivals decor—including a live camel—inside the first floor of our main Ahmanson Building,” Sion said.

The earlier event date did not affect fund-raising totals, however: The event set a new record, with gross revenue exceeding $1.6 million. Nearly $70,000 was raised from a raffle for a 2018 Lexus RX 450h Hybrid, and more than $175,000 was raised to send 900 children to science camp.

Click through the slide show to see inside the immersive, King Tut-theme gala. 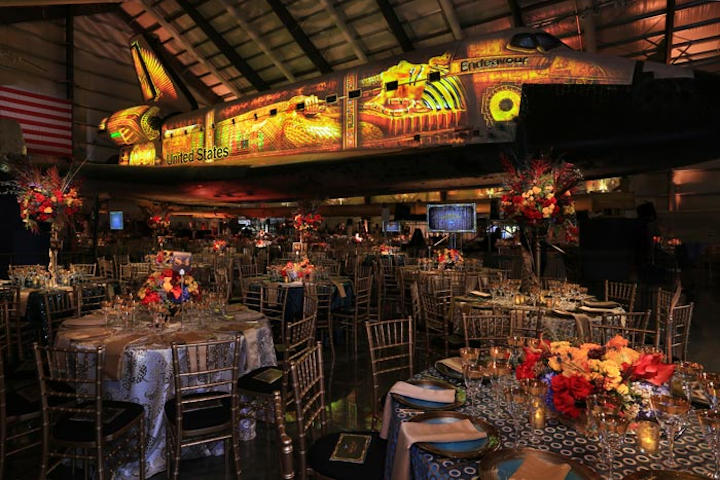 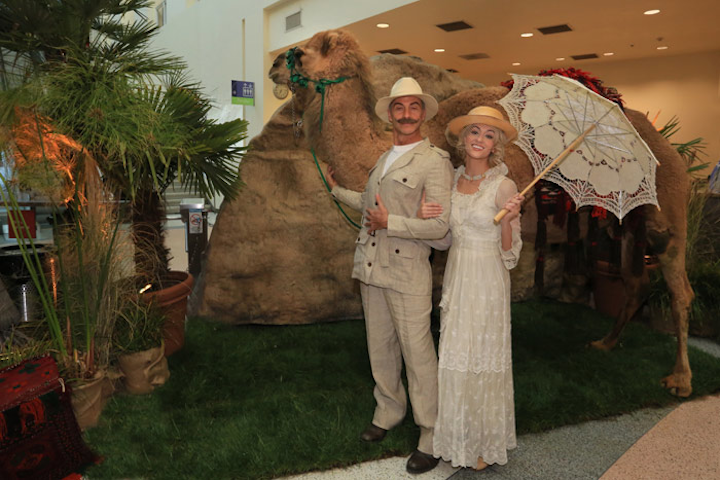 The multi-part event kicked off in the Science Center’s Ahmanson Building, where guests could pose with a live camel.
Photo: Nadine Froger Photography 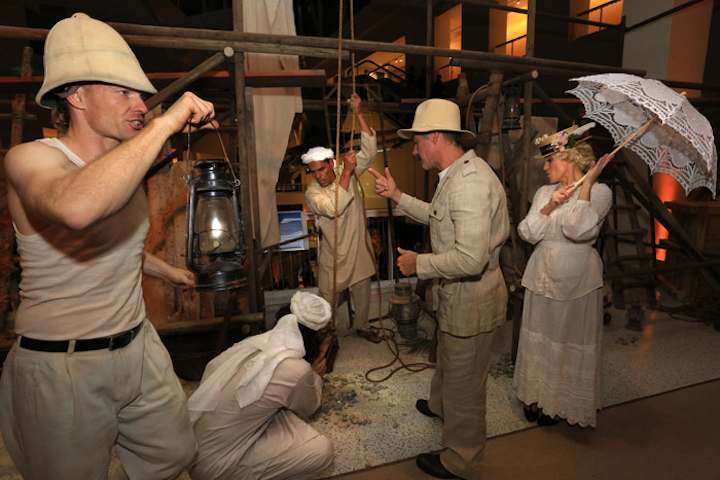 The cocktail reception was set in the year 1921, when archaeologist Howard Carter and his British sponsor, Lord Carnarvon, were searching for the tomb. Actors in vignettes represented Carter’s crew, searching for the grave in Egypt’s Valley of the Kings. Dusty scaffolding and canvas field tents added to the ambiance.
Photo: Nadine Froger Photography 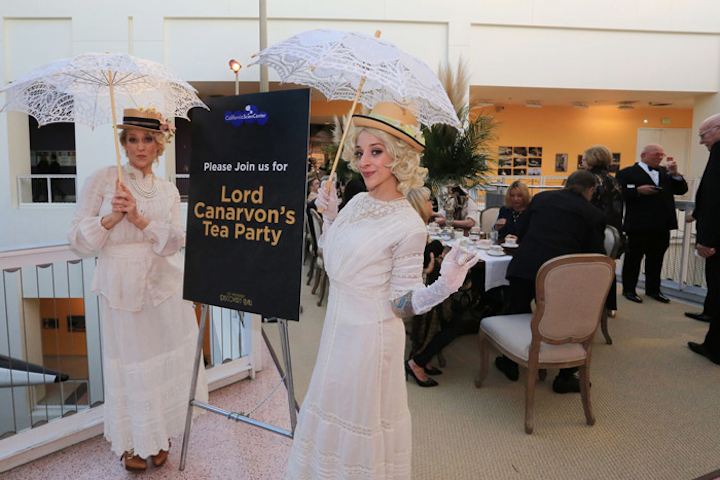 “One of my favorite vignettes during the cocktail party was on the third floor to help entertain guests as they waited in line to see the exhibit,” said Sion. “It was a replica of an imagined tea party by Lord Carnarvon. When he would visit the Valley of the Kings to check up on the progress of the dig, there were photos of proper British tea parties right on the desert sand with all the regular finery one would expect as if the guests were dining in London. With the help of Lucent Dossier’s actors, who portrayed Lord Carnarvon, Howard Carter, and their friends, gala guests were invited to join the party for a spot of tea and hear the latest news about the excavation.”
Photo: Nadine Froger Photography 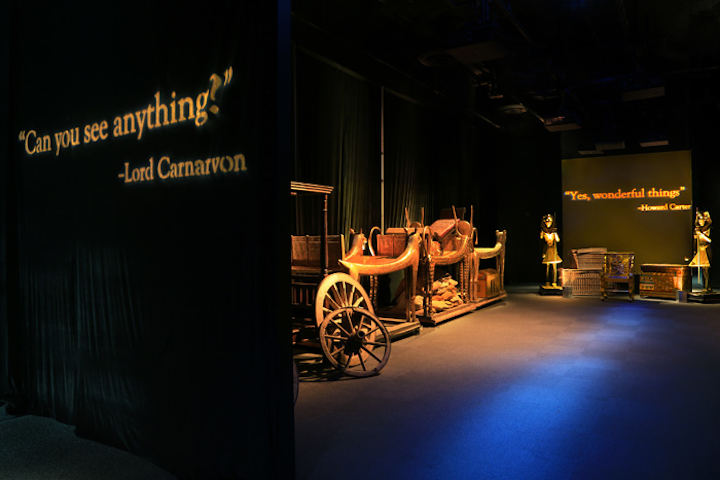 As guests progressed to dinner—and through the story of the discovery—they first passed through the antechamber of Tut’s tomb, getting a glimpse of the treasures Carter found when he first uncovered the site.
Photo: Nadine Froger Photography 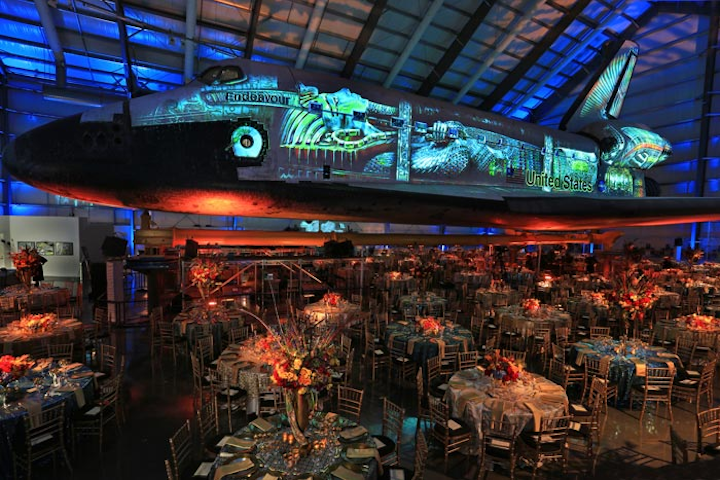 The color palette changed throughout the night, from warmer gold tones at the beginning of the evening to shades of blues and purples for dessert service.
Photo: Nadine Froger Photography 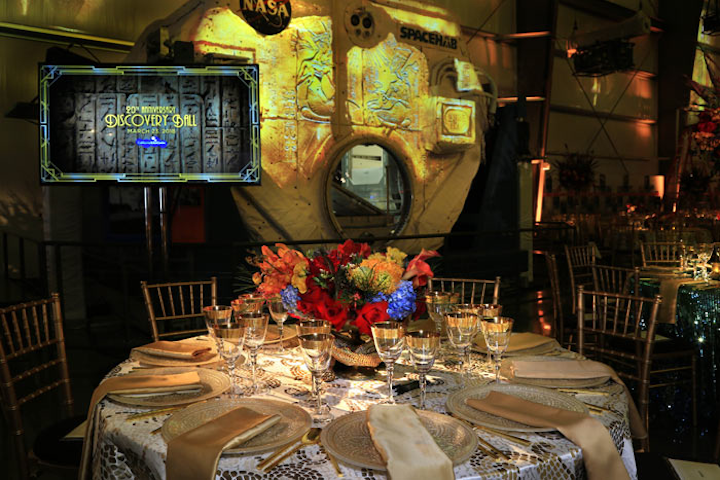 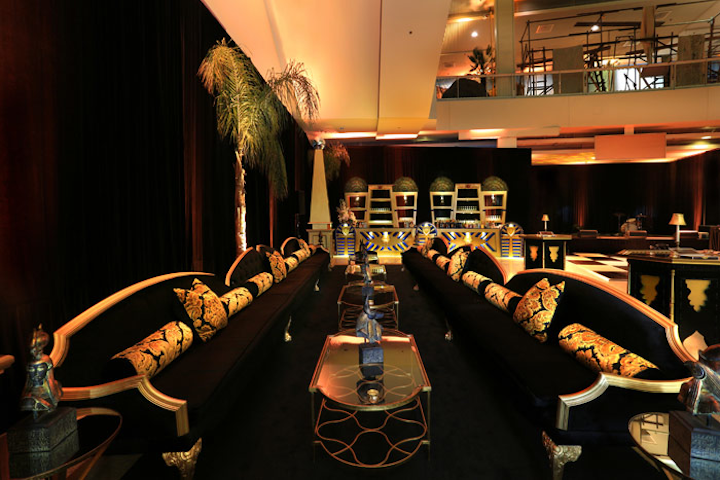 As guests ate, staffers transformed the cocktail party space into a Great Gatsby-inspired after-party. “In doing research for this event, we learned that the story of The Great Gatsby took place in the summer of 1922, the same year that Tut was discovered,” explained Sion. Meant to take place shortly after the discovery of the tomb, the party was designed to reflect a building Lord Carnarvon erected near the build site in the Valley of the Kings.
Photo: Nadine Froger Photography 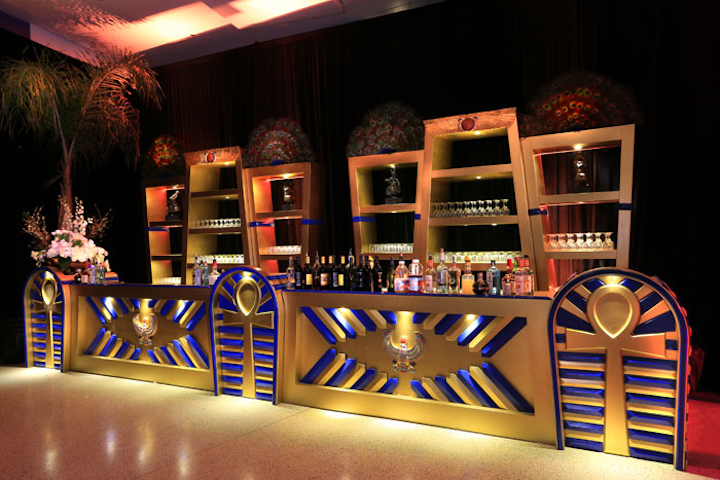 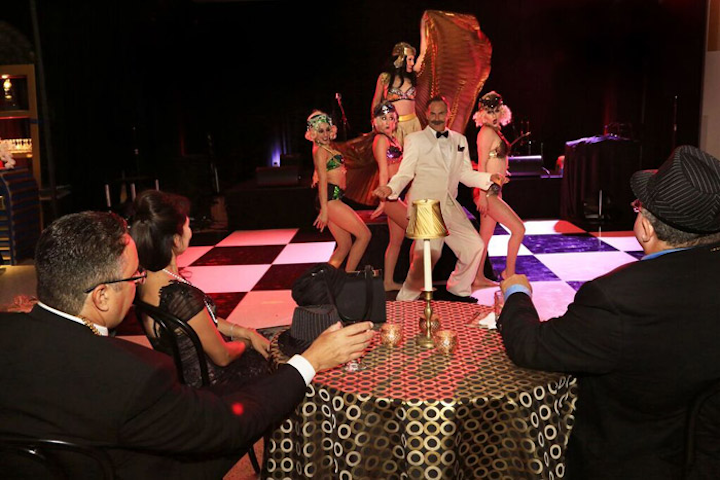 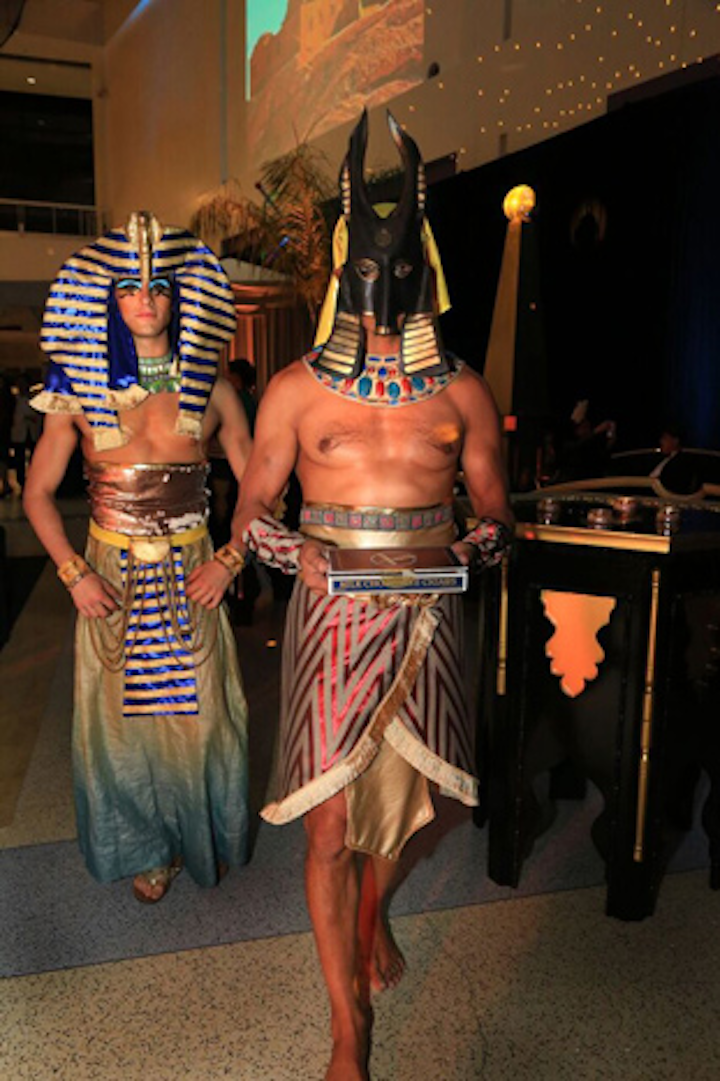