Ravinia, the Chicago music institution, featured the hometown performer at its gala for the first time, and planned an evening that put her on center stage in more ways than one. 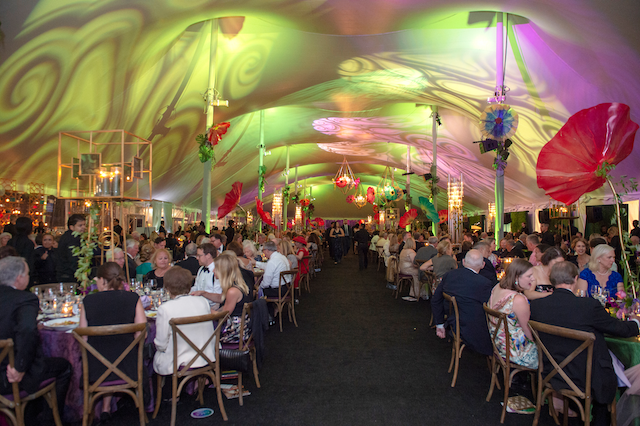 Kehoe Designs provided decor for a tented dinner that followed the performance. Some 800 guests sat for dinner in an 80- by 220-foot tent erected on the lawn. The tent was constructed over the course of seven days and was accompanied by a 20- by 110-foot food prep area.Photo: Courtesy of RaviniaCHICAGO—The annual Ravinia Gala, hosted by the institution's women's board, featured a powerful performance from Chicago native Jennifer Hudson. Hudson sang alongside the Chicago Symphony Orchestra, which has called Ravinia its summer home since 1936.

Though the event typically takes place on a Saturday evening, this year it was held Sunday, July 14, to coincide with Hudson's concert. Though Sunday can have a decidedly less festive feel, planners didn't report a dip in attendance. According to Ravinia's director of communications Nick Pullia: "This was the second time we've held the gala on a Sunday, and our guests seem to really like it."

The 800 gala guests—along with the thousands of regular concert ticket-holders—also seemed to like Hudson's show. The vocalist got thunderous applause and a long standing ovation when she wrapped her set, which included songs such as "And I Am Telling You I'm Not Going," from the musical Dreamgirls, for which the singer won an Academy Award. "It was her C.S.O. debut, but you'd never know it," Pullia said. "She commands the stage." Hudson also coordinated with the gala, wearing a purple outfit that matched the event's invitations and Kehoe Designs' jewel-tone decor.

After the concert, a dinner took place under a tent on the lawn. "The big challenge in planning an outdoor event is working around the weather," Pullia said. "We had many contingencies in place from having umbrellas at the ready in case of rain to passing out branded fans, which we did use. After a very cold and rainy June, we got very lucky that the day of our gala could not have been more beautiful.”

The gala raised $1.1 million, and planners say that it's one of the most successful in the event's 53-year history. By comparison, the 2018 event raised just short of $1 million. 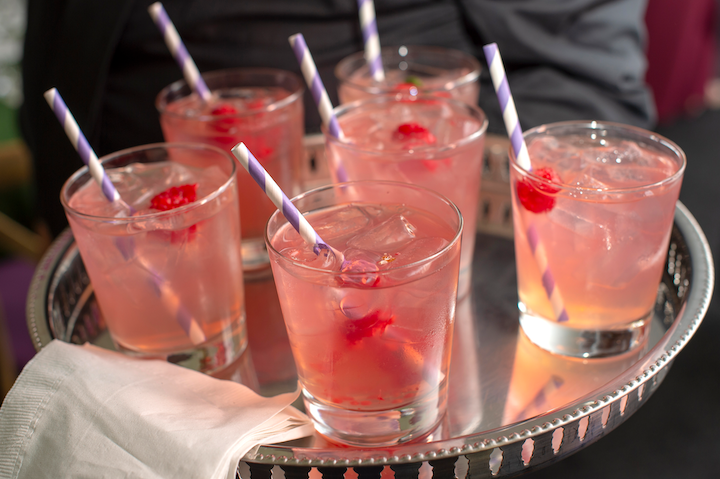 Before Jennifer Hudson's performance, gala ticket-holders were invited to a cocktail reception on the lawn. The reception featured summery specialty cocktails which servers passed; there were also open bars.
Photo: Courtesy of Ravinia 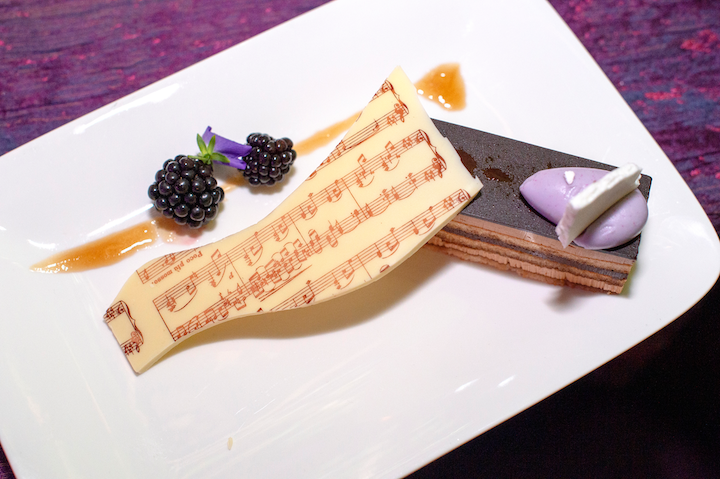 Food For Thought catered the event, providing a lavender opera cake for dessert. Made with almond cake, lavender ganache, and blackberry meringue, the treat was garnished with musical notes on a sliver of white chocolate.
Photo: Courtesy of Ravinia 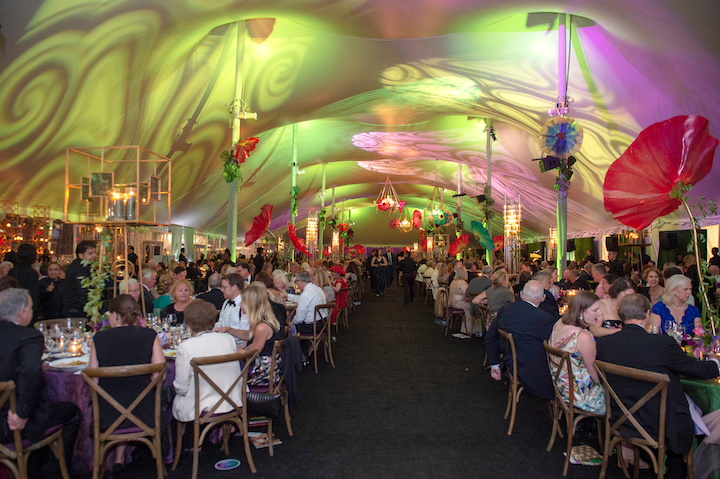 Kehoe Designs provided decor for a tented dinner that followed the performance. Some 800 guests sat for dinner in an 80- by 220-foot tent erected on the lawn. The tent was constructed over the course of seven days and was accompanied by a 20- by 110-foot food prep area.
Photo: Courtesy of Ravinia 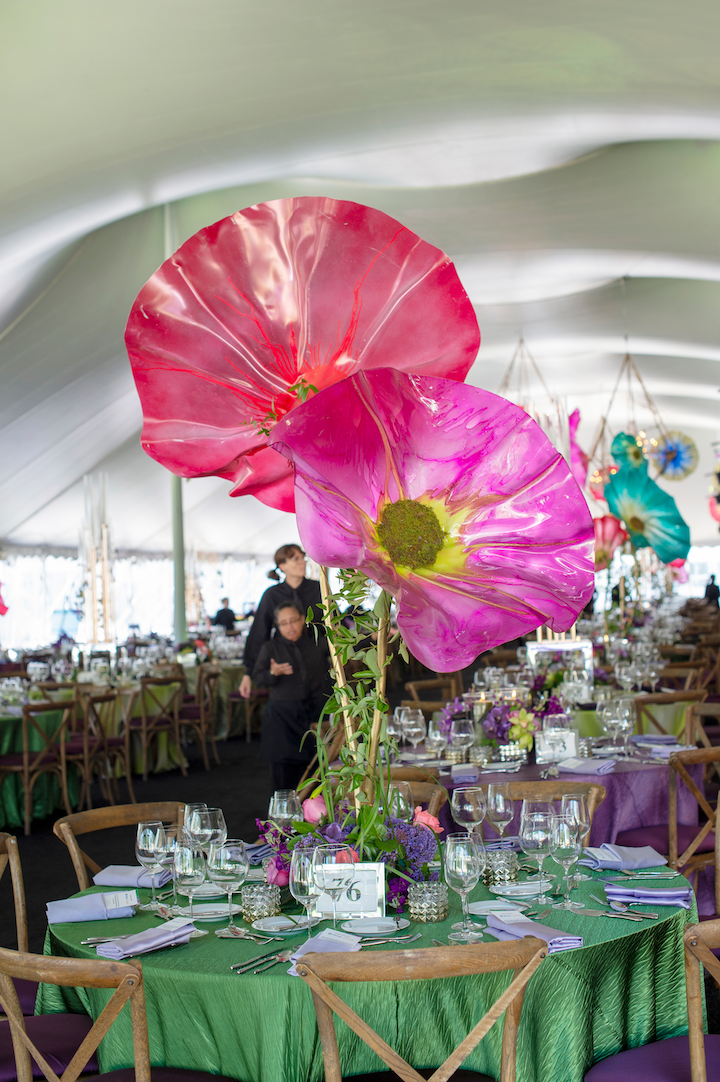 Inspired by the work of Chihuly, oversize flower sculptures sprang from the center of dinner tables.
Photo: Courtesy of Ravinia 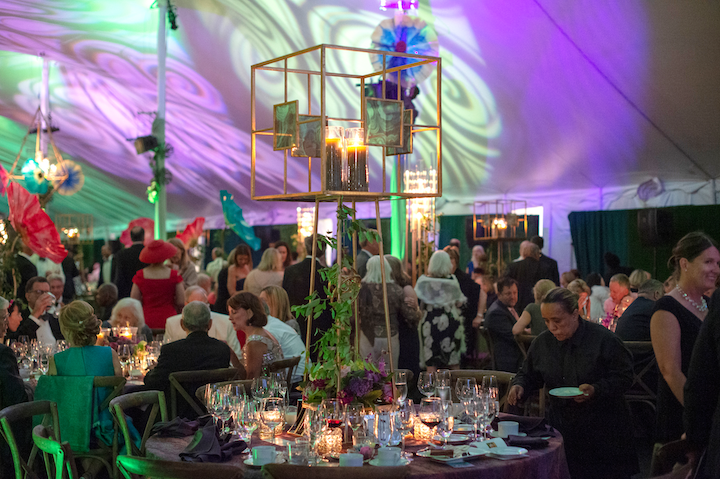 Jewel tones dominated the color palette. Before the concert, video about Ravinia’s Reach Teach Play education programs and the recent naming of the Sistema Ravinia Auditorium at Circle Rock was created by Kyle Dunleavy and Patrick Gipson, both on the Ravinia staff.
Photo: Courtesy of Ravinia 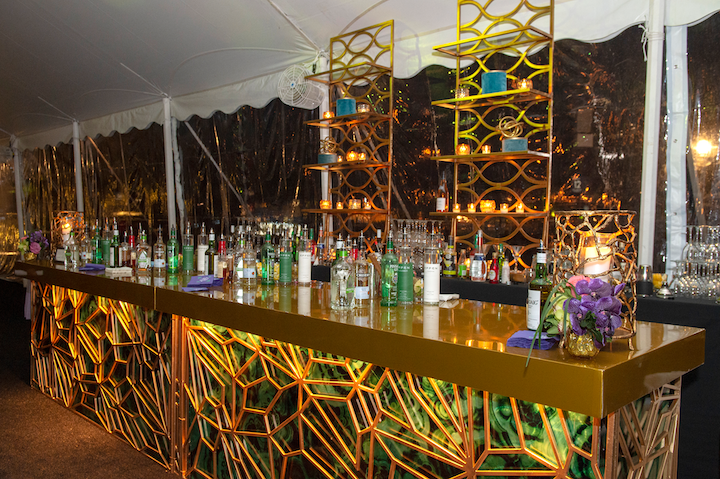 Guests could order cocktails at jewel-toned bars in the dinner tent. Purple cocktail napkins, candles, and flowers in golden vases spruced up the bars.
Photo: Courtesy of Ravinia Jennifer Hudson headlined the gala, taking the stage alongside the Chicago Symphony Orchestra. The vocal powerhouse entered the pavilion through the back, shaking guests' hands as she made her way to the stage. As she walked, Hudson sang "How Great Thou Art."
Photo: Courtesy of Ravinia
More in Event Design