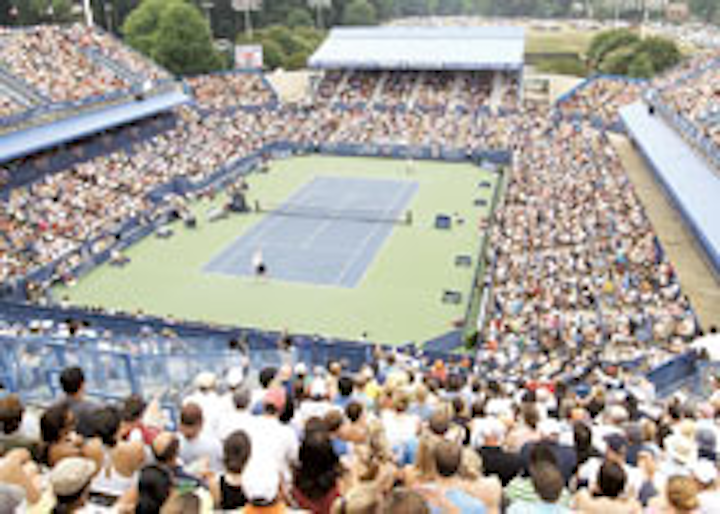 2. Preakness Stakes
More than 112,000 fans—many in elaborate headwear—turned out to Pimlico Race Course in Baltimore on May 17 for the 133rd running of the Preakness Stakes. Big Brown galloped to victory in the second leg of the Triple Crown. Produced by Pimlico owners Magna Entertainment, the 2009 race is scheduled for May 16.

3. AT&T National Golf Tournament
The second outing of this pro event hosted by Tiger Woods was held at the Congressional Country Club in Bethesda, Maryland, from July 2 to 6. A field of 120 PGA players competed for the $6 million purse, with proceeds benefiting the Tiger Woods Foundation and D.C.-area youth groups. Roughly 140,000 fans turned out to see Anthony Kim win. Organized by foundation president Greg McLaughlin, the tournament will return to Bethesda in 2009.

4. Marine Corps Marathon
Some 30,000 runners will race through town on October 26, finishing at the Marine Corps Monument in Crystal City. The fourth largest marathon in the country, the so-called “People’s Marathon” is the largest race in the world not to offer prize money. The race is produced by the nonprofit Marine Corps Marathon organization, led by director Rick Nealis.

5. Land Rover America’s Polo Cup
America’s Polo Cup debuted in 2007 at Morven Park in Leesburg, Virginia, and returned in 2008. The May 9 to 10 battle between the U.S. and Italy included a halftime show by U.S. Coast Guard helicopters, and a post-match set by Huey Lewis and the News. CSI-Capitol Services oversaw the event along with the cup’s founders, chairmen Tareq and Michaele Salahi, and president Sky Melton. The cup, which brought in 15,000 visitors, will return on May 9.

6. SunTrust National Marathon
More than 1,600 runners raced through the District in March for the fourth National Marathon. The event raised $230,000 for Special Olympics of the District of Columbia and the Progressive Sports and Entertainment Alliance. The marathon, produced by the Greater Washington Sports Alliance and race director Keith Dowling, returns on March 21.

7. Smithsonian Young Benefactors Polo Cup
This fund-raiser for Smithsonian educational programs and the Young Benefactors Culture 4Kids Fund was set to take place on September 6, but was held a day later due to Tropical Storm Hanna. John Walsh of America’s Most Wanted hosted the match on the National Mall. Smithsonian Associates director Barbara Tuceling oversees the event with the polo host committee, led by co-chairs Joanna Block and Carolina Furukrona.