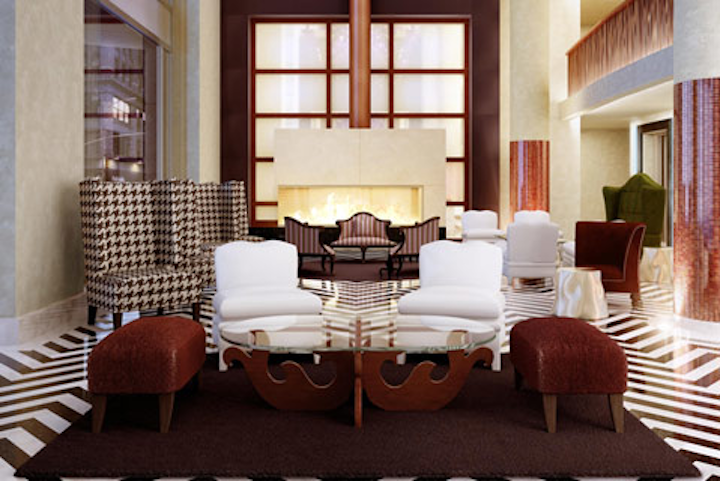 Summer is typically a slow time for venue openings, but this year the season is packed with new spots. On top of the places sprouting up in the Hamptons and a slew of new rooftops in the city, New York will see an influx of hotels—all of which are equipped with meeting facilities and restaurants—plus the latest venture from Mario Batali and business partner Joe Bastianich.

1. Gansevoort Park
The location and offerings of the second property from the Gansevoort Hotel Group have created quite a bit of buzz. Aside from the much-anticipated rooftop—it's 13,000 square feet, with three floors of bars and lounge-style event spaces, plus a pool—the 19-story tower in Gramercy Park will have 249 rooms, an Exhale spa, and a 3,000-square-foot ballroom on the third floor, as well as an Italian restaurant called Aselina. Gansevoort Park is scheduled to open in July.

2. Chatwal New York
Originally slated for spring, the new hotel from Sant Chatwal, C.E.O. of Hampshire Hotels and Resorts (and hotelier Vikram Chatwal's father), is now slated to open August 1. Still in the plans for the 88-room property, inside the landmark Stanford White-designed Lambs Club building, are a mix of Art Deco and modern touches in Thierry Despont's design and a 90-seat restaurant (also known as the Lambs Club) operated by Geoffrey Zakarian. There will also be a handful of meeting spaces available, including a banquet area for 120.

3. W New York Downtown
This much-delayed development from Starwood Hotels and Resorts is expected to finally open its doors in August, adding 217 more hotel rooms to the financial district. Just south of where the World Trade Center towers will stand, the downtown building will also offer nearly 2,000 square feet of dedicated meeting and event space, a bar and terrace for cocktails, and a bilevel BLT Bar & Grill.

4. InterContinental Times Square
InterContinental has hotels all over the world, so the second New York property from the group will be familiar territory for planners who travel frequently. Among the array of meeting-friendly amenities are a 20-seat boardroom, a 4,000-square-foot ballroom, and a business center equipped with computers, copiers, and Internet access. Also on offer at this hotel will be Ça Va, a 125-seat French brasserie-style restaurant from Todd English that will have a private dining room for 56 people. The InterContinental Times Square is slated to open in mid-July.

5. Andaz 5th Avenue
Continuing the rapid expansion of Hyatt's Andaz division is this 184-room boutique hotel opposite the New York Public Library. Designed by Tony Chi, the Andaz 5th Avenue follows the ideas laid out by the Andaz Wall Street, with residential-style rooms, a farm-to-table restaurant, and flexible studios for corporate functions. The largest event space measures 1,478 square feet and can be split into three sections.

6. James New York
The New York sibling to the James Chicago is expected to debut August 1 at the corner of Grand and Thompson streets in SoHo. Like many other new hotels, the 114-room James New York will have rooftop lounge and bar with a pool. There'll also be an indoor/outdoor event space with built-in videoconferencing, a spacious lobby lounge, and a restaurant from an as-yet-unnamed chef.

7. Eataly
It may not be a hotel, but with more than 30,000 square feet of space, five restaurants, and a 4.500-square-foot rooftop beer garden, Mario Batali and Joe Bastianich's Italian food emporium will be more than just the average eatery. Projected to open by mid-July, this enormous project will fill the space that once housed the International Toy Center and will offer restaurants devoted to meat, seafood, vegetables, pizza and pasta, and panini.