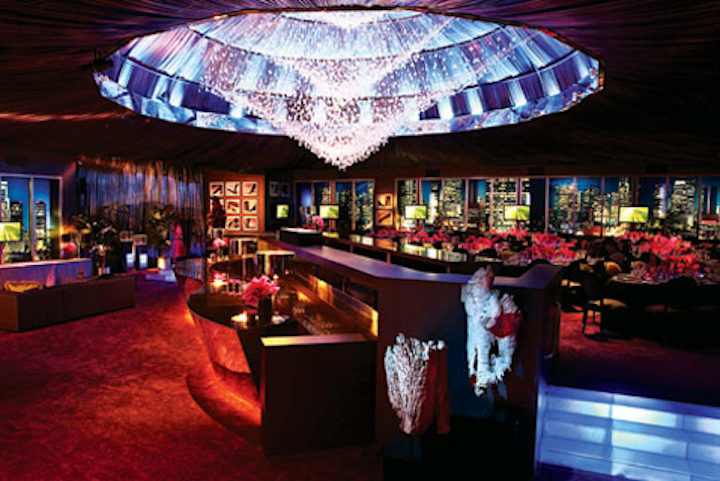 In Style and Time Warner's after-party at the Golden Globes
Photo: Nadine Froger

1. Academy Awards
There are a lot of award shows in town, but the Oscars rise to the top of the list for the production value and sheer number of related events. The Academy of Motion Picture Arts and Sciences hosted the 2010 event at the Kodak Theatre on March 7, back from its typical February date to avoid a conflict with the closing ceremonies of the 2010 Winter Olympics.

3. Grammys
The Recording Academy of Arts & Sciences’ 52nd annual music awards took to the Staples Center on January 31—the first January appearance in their history. The show aired live on CBS. The Recording Academy’s Branden Chapman oversaw a huge after-party.

5. The Emmy Awards
Usually held in mid-September, the Emmys will shift to August 29 this year to avoid Sunday football programming. The show takes to the Nokia Theatre. Entertainment Tonight and HBO are typically among the lavish party hosts.

6. Film Independent’s Spirit Awards
Film Independent moved the 2010 Spirit Awards to March 5, in a tent on the event deck at L.A. Live—a controversial departure from the show’s typical slot on the day before the Academy Awards and its most recent Santa Monica location. This time the awards—known for a more casual, free-wheeling vibe—were handed out two days before the Oscars.

7. Environmental Media Awards
Proving their staying power, the E.M.A.s celebrated 20 years with an October 25 event at the Studios at Paramount honoring the likes of Richard Branson. The party after the ceremony is an eco-friendly affair with organic food and drinks, an on-message auction, and reusable cloth signage.

8. American Music Awards
These awards took to L.A. Live on November 22, and the ABC broadcast of the program garnered more than 14 million viewers, the largest audience for the show since 2002. Dick Clark Productions produced, tapping 15/40 Productions for the arrivals and (scaled-down) after-party production management and design.

9. BET Awards
Established in 2001 by the Black Entertainment Network, these awards celebrate African-Americans in music, sports, and other entertainment realms. Queen Latifah hosted the 2010 awards on June 27, which were broadcast live from the Shrine Auditorium. In 2009, in the days after Michael Jackson’s death, the show drew record ratings.

10. A.F.I. Fest
The latest incarnation of Los Angeles’s longest-running ﬁlm festival wrapped on November 7. In a congested festival marketplace, the American Film Institute’s 23-year-old gathering, with presenting sponsor Audi, offered free tickets to all screenings. All seats were fully committed under the new plan, an attractive arrangement for sponsors.

12. People’s Choice Awards
A record-breaking 60 million fans voted to decide the winners of the People’s Choice Awards, which took place January 6 at the Nokia Theater for the first time in the show’s history. Although that number is likely inflated by repeat voters on the Web site, the turnout was still significantly higher than the 13 million ballots cast the previous year.

13. Women in Film’s Crystal & Lucy Awards
The latest installment of Women in Film’s celebrity-heavy annual award show and fund-raiser took to the Hyatt Regency Century Plaza Hotel June 1. The professional group was founded to acknowledge women in a male-dominated environment.

15. American Cinematheque Gala Tribute
The 24th annual American Cinematheque Award was presented to Matt Damon on March 27 at the Beverly Hilton Hotel; the gala was broadcast on ABC. The annual fund-raiser supports ﬁlm preservation and has just one honoree a year—typically an uncontroversial big-name star.

18. N.A.A.C.P. Image Awards
The 41st edition of this show took to the Shrine Auditorium on February 26 and aired live on Fox. A series of lead-up events included a nominees’ press conference announcement, a nominees’ luncheon, a golf challenge, and a ladies’ tea.

19. Hollywood Film Festival
Starz will present this film festival and the Hollywood Film Awards on October 20 through 25, billing it as a kickoff to award season. The program dates back to 1997. The ArcLight in Hollywood and the Beverly Hilton are the festival’s venues.