Attendees never know what to expect at this sensory-filled conference. 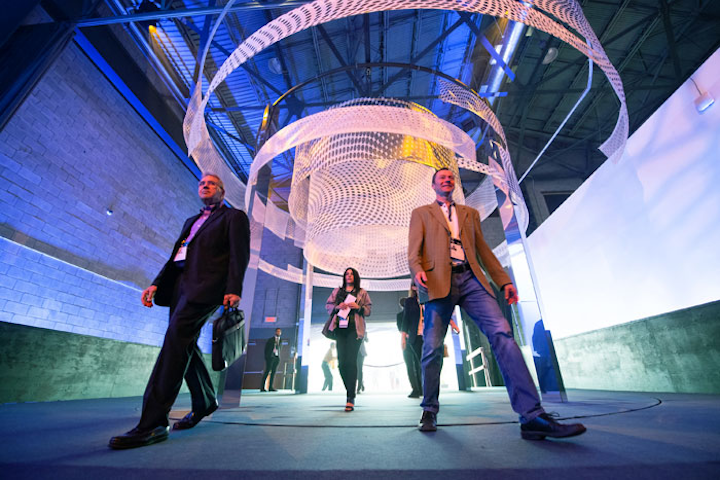 The theme "Transformative Collisions" was evoked right away: As soon as attendees walked into the venue, they walked over a rotating platform.
Photo: Agnieszka Stalkoper

At the seventh edition of the international business conference C2 Montréal, which was created by Sid Lee in collaboration with founding partner Cirque du Soleil, attendees got a sense of the theme of “Transformative Collisions” as soon as they walked into the venue: They were thrown off balance by a rotating platform. That unexpected entrance was just the start of the event, held at Arsenal art gallery and warehouse in May.

Julia Cyboran, vice president of marketing and communications for C2 Montréal, said the theme came from the spirit of wanting to connect with conference participants, who numbered more than 7,000 from 61 countries in 34 different industries, the conference’s largest attendance to date. More than 73,500 connections were made through the conference’s Klik event scheduling and networking platform and wearable smart badge, she said.

One trademark of the conference, meetings in unusual environments, is a huge draw for conference attendees. The interactive stations, known as Labs, provided attendees with hands-on teambuilding, networking, and tech-fueled experiences designed to take them out of their comfort zone.

“Every year we start with a blank canvas. The Arsenal is absolutely empty,” said Genifere Legrand, C2 Montréal’s chief creative officer, who oversaw the production of the Labs. “We build all these environments to make sure the people can easily connect and experience the content. We’re constantly redefining the work that we do.”

Labs included a colorful augmented-reality experience designed to stimulate the five senses, a kitchen where groups were invited to create their own cookies and market them to attendees, a mirrored room where attendees discussed diversity and bias in the workplace, and yurts where guests could undergo hypnosis and see their brain patterns through the use of neurotechnology.

Cyboran said that the testament to C2 Montréal's effort to constantly redefine itself—through its interactive experiences and art installations, presentations, workshops, and overall design—is that more people attended the conference than ever before.

“It’s as if we lit the flame and people are adhering to the work we are doing, and our mission of trying to propel the economy and society forward by having people connect,” said Cyboran. “The analog experience that’s created at C2, where people physically sit down in front of each other and have a conversation, is so valuable in today’s world. We’re trying to push that further every time.”