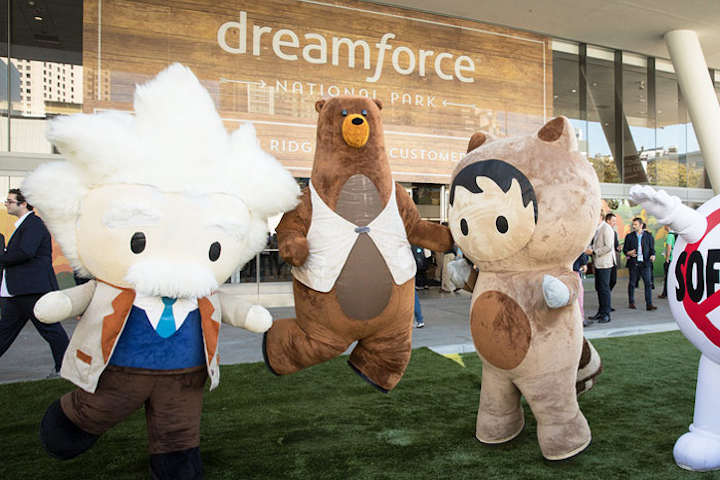 While few events rival Salesforce’s Dreamforce user conference in size—it attracts some 170,000 people to San Francisco each fall—the tech company makes sure its other events stand out as well.

Connections, a digital marketing, commerce, and customer service conference, brought 10,000 people to McCormick Place in Chicago from June 12 to 14, locating the event in the city with Salesforce’s largest B-to-B customer base. It was packed with more than 550 breakout sessions and hands-on demos with Salesforce experts and partners, according to Karin Flores, the company’s vice president of strategic events.

This year, the conference focused on content around equality, sustainability, and mindfulness, and used mascots to represent different parts of its community. It introduced Astro Nomical, a non-binary character representative of community and inclusion who empowers people to build amazing things; Codey, representative of developers, who believes you can build anything with clicks or code; Cloudy the goat, an administrator and a leader who builds innovative apps in the cloud; and Appy the Bobcat, representative of partners, who is motivated, innovative, and entrepreneurial, and uses her network to get things done.

“We used mascots as our brand ambassadors so it’s like going to Disney,” Flores said. “We met with Disney’s imagineers to help us with the look and feel of the convention because we not only want to give attendees a hands-on education, we want them to have fun too.”

On site was a mindfulness zone and a meditation center where attendees could put on headphones for a guided meditation. Additionally, actress Lucy Liu opened the show talking about women trailblazers and actress Kerry Washington closed the show.

The show also had a National Park theme that included “a campground in the middle of the ‘forest’ where ‘trailblazers’ attend sessions, join hands-on demos, participate in a Virtual Reality Astro River Run, or just hang out and network,” said Flores.

There were different lodges, like the marketing lodge where experts talked about the soaring expectations of customers and how business must place individuals at the center of every interaction. Other disciplines included ecommerce, customer service, and digital customer engagement, among others.

Sitting around a campground, trail guides (experts) would lead attendees in a particular topic. Attendees had the opportunity to take different trails and earn badges. For every badge earned, a donation went to the Sierra Club and a school in Chicago.