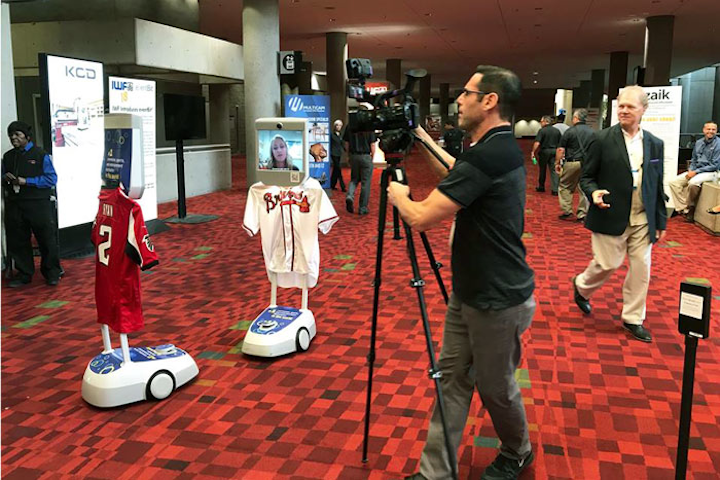 The International Woodworking Fair celebrates an art that’s as old as the ages, but organizers used the latest technology to boost attendance—virtually. Telepresence Robotic Beams and GoPros connected attendees who couldn’t make the show, held in August at the Georgia World Congress Center in Atlanta.

Attendees of the show—which include set designers, carpenters, contractors, and retailers like Home Depot and Lowe’s—come to the biannual expo to see the latest from furniture manufacturing, architectural woodworking, and custom and general woodworking professionals from across the world.

The largest show to date since it started 10 years ago, the fair had more than 30,000 registered visitors experiencing the show, said Jim Wulfekuhle, vice president of sales and marketing at the International Woodworking Fair.

Attendees from all 50 states and 98 countries took part in product showcases and demonstrations and more than 70 educational sessions covered topics including manufacturing techniques, business development, and production strategies.

The show added a new pavilion on the show floor, bringing the total pavilion count to three: a decorative surfaces pavilion, cabinet and closets pavilion, and one dedicated to wood flooring. This year’s show also hosted more than 1,000 exhibitors and the largest exhibit space in a decade.

Bringing everyone together were telepresence robotic beams that allowed users to virtually browse and interact with exhibits through robots controlled remotely from their computers, Wulfekuhle said. The show also had a team that wore GoPro cameras to livestream their experiences in real time via social media, as well as “IWF TV,” which offered daily show recaps, exhibitor interviews, and seminar summaries available to view online.

“We thought these would be a great idea for companies who can’t send their whole staff to the show. Next year we’re thinking that some companies can rent a beam to roam the show,” said Wulfekuhle.

Also new this year were five social media ambassadors who were tweeting and posting the action on the show floor on Facebook.

“We decided to do the robots and GoPros because you have to be innovative. You have to put yourself out there. When you do you’re going to learn a lot.”